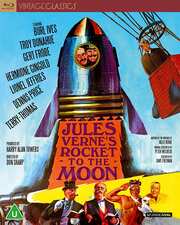 DVD
Those Magnificent Men in Their Flying Machines
Related Articles

Review for Jules Verne's Rocket to the Moon

I made another serendipitous mistake when requesting a check disc! NASA’s making noises again about sending manned missions to the moon again, although with the SLS and their commercial partners, and the fact that they have funding at this time, it seems more likely to happen than at any time since the nineteen sixties. Speaking of the 1960s, once Kennedy announced his grand vision for space exploration, that inspired a generation of filmmakers, and moon movies were coming out all over the place. When Studiocanal solicited this, rather British looking film, I thought it was something else completely, subsequently discovered to be The Mouse on the Moon, itself a sequel to The Mouse That Roared. However, Jules Verne’s Rocket to the Moon turns out to be a completely different film, and one I should have heard of. After all, it is a spiritual sequel, in terms of cast, and especially tone to Those Magnificent Men in Their Flying Machines, and shares DNA with The Great Race, and Monte Carlo or Bust. I love those films, which begs the question as to why I had never even heard of Jules Verne’s Rocket to the Moon, let alone watched it before.

Studiocanal are giving Jules Verne’s Rocket to the Moon a UK Blu-ray debut featuring a brand new restoration of the film.

It’s the Victorian era, the age of science and reason, and Britain takes pride in leading the world in all of these fields, spearheading the Industrial Revolution. It’s aspects of this revolution, the teletype machine that causes the famous showman P.T. Barnum and his friend Tom Thumb to decamp from the US and head to Britain, to seek another fortune. It’s a lecture at the Academy of Science that sparks his imagination, when German inventor Professor von Bulow declaims that his newly formulated explosive is powerful enough to make a projectile leave the Earth’s sphere altogether, maybe even reaching the moon.

Many scoff, but Barnum sees the UK’s next biggest accomplishment, with an American in the pilot seat. With the patronage of the Duke of Barset, and the manufacturing skill of engineer Sir Charles Dillworthy, they set about creating a rocket to the moon. The first problem is that they’ve left the financing in the hands of Captain Sir Harry Washington Smythe, professional cad and bounder. The second problem is that Dillworthy’s designs seem rather unwieldy. Fortunately in France, inventor Gaylord has already been working on the problem, and he wants in; although he has to extricate himself from a love triangle first.

Jules Verne’s Rocket to the Moon gets a 2.35:1 widescreen 1080p transfer on this disc. The image is really quite nice. The colours are rich and consistent, detail levels are good, the film is stable and there is no sign of print damage or age. It’s a vivid Technicolor view of the Victorian era that stands in contrast to the dingy and misty Dickensian worlds we usually see, but as stated in the extras, this was once in vogue in period films made in the sixties. There is a light level of grain, and if there is a niggle to be had, it’s with a level of softness in the source that means the film doesn’t quite achieve its full potential in HD.

You get what I assume is a PCM 2.0 mono English track; certainly there was no audible separation despite the player flagging it as stereo. It’s here that the disc disappoints, with a rather muddy, occasionally hollow audio presentation that made making out the dialogue a bit of a chore. Also, when I watched the film on the home cinema, I encountered sync issues. This was rectified by passing the audio to my TV speakers instead, which had the added effect of clearing up the audio a bit. But I was still grateful for the HOH subtitles as I was still missing dialogue. How much of that is down to the panoply of accents in the film is another matter.

The disc boots to an animated menu. And on the disc you’ll find the following extras,

I mentioned in my opening how Jules Verne’s Rocket to the Moon was something of a spiritual sequel to Those Magnificent Men in Their Flying Machines. It may share Terry-Thomas and Gert Frobe in terms of cast members, and there is a similar comedic aspiration, and celebration of early technology and inventiveness, but in execution the films are quite different. In the extras you’ll hear of the sheer chutzpah of the producers in getting this film made, a multi-national creation that tried to serve as many audiences as it did investors. The end result is a film that isn’t really that good, more historical curiosity than entertainment, and I can see why it had completely passed me by. I doubt even in my childhood that too many broadcasters would consider it audience sating fare for a Sunday morning matinee.

The biggest problem is that in comparison to those other films, it eliminates the most important aspect, that of the race. Getting to the moon is all about national pride, but unlike the real history of the moon shot, there is no space race here, no plethora of nations competing to create bizarre rocket ships and get there first. Instead it’s more of a US-Anglo-Franco cooperative, pooling their talents to come up with a ship and cannon design familiar to those that have read the Jules Verne story (practically the only similarity between the film and the book). If there is any sense of a race, it’s a race against time, to get the perfect launch window, which doesn’t really have the multi-national clash of personalities.

The second problem is that the film just isn’t that funny. It may have the inimitable Terry Thomas doing his cad and bounder routine; indeed the film is overflowing with screen talent; Gert Frobe, Lionel Jeffries, Dennis Price, Graham Stark, and Burl Ives, and you’d expect the humour to reflect these luminaries. The script just isn’t up to the task. There are moments of humour, little bits that will elicit laughter, but the film never builds up any momentum, never makes the most of these characters.

What irked me most about the film was how poorly it used the characters. They flit in and out of the story, never being developed effectively, or engaging emotionally. I certainly wasn’t invested in any of them, I never got into the prideful attainment of lunar conquest that drove Barnum and the inventors, I wasn’t impressed by the Gaylord, Henri, Madelaine triangle, Grundle’s pursuit of Anna never registered, Barnum’s exploitation of Tom Thumb just fizzled out, and even if Terry Thomas had that characteristic rakish twinkle in his eyes, his Captain Sir Harry Washington Smythe’s scheming and machinations never lit up the screen in the same way as in Magnificent Men or Monte Carlo or Bust. I just couldn’t find a compelling character arc.

All of this leaves Jules Verne’s Rocket to the Moon as something of a footnote in cinema history. You can see in the interviews on the disc that the commentators are more ebullient when talking about the film’s producer, Harry Alan Towers, than they are talking about the film itself. The stories they tell are about the film’s production, and that’s what you’re left with after viewing the film. It’s an audacious production, but one which feels like a confidence trick played on the audience. You get the feeling that a proper making of documentary would be more entertaining than the film itself. The disc is then a boon to film historians, and to collectors who would put it next to Those Magnificent Men In Their Flying Machines, and Monte Carlo or Bust to ‘complete’ the sets. The irony is that neither of those films have UK Blu-ray releases, but now Rocket to the Moon does.