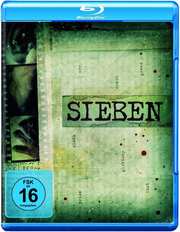 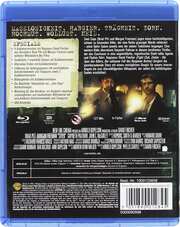 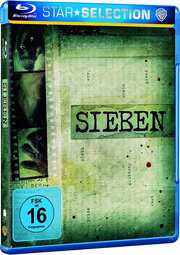 I can’t believe that I haven’t yet reviewed Seven. I have had this film on various formats down the years. In fact, I touched on those ‘one time’ films in another review, and Seven is another example. I watched it once in the cinema. I bought it on VHS and watched it once. I bought the original vanilla DVD and watched it once. I then bought the 2 disc Special Edition and yes, watched it just the once. Now that I’ve imported the Blu-ray (back when getting German titles in Amazon multibuys was a lot more satisfying than buying from the UK site), I hope that it’s the last version I buy, and get around to eventually re-watching it. On the bright side, I can’t succumb to the temptation to cut and paste in a double dip review.

Detective Somerset is a homicide detective on the verge of retirement, and he’s looking forward to it, having worked for decades in a city where crime just gets worse and worse. Given that he’s meticulous, studious, and apt to get into the psychology of the suspects, retirement couldn’t come fast enough. His replacement, Detective Mills is a hot young Turk, eager to make an impression, having moved to the city with his wife Tracy. The two butt heads on their first day over a particularly nasty case, an obese man tortured to death by being forced to eat until he burst. Somerset sees the start of something he’d much rather not pursue, but he gets assigned the case, with Mills assigned to the next case to come along, something not so provocative. But that case turns out to be a rich lawyer, forced to cut a pound of flesh from his body, and with ‘Greed’ written in blood by his corpse. When Somerset finds ‘Gluttony’ carved into the wall at the obese man’s crime scene, it becomes obvious that the crimes are linked, that this is the start of a serial killer’s spree. The two wind up having to work together anyway.

Seven gets a 2.40:1 widescreen 1080p transfer on this disc in the VC-1 codec. Audio comes in DTS-HD MA 7.1 Surround, DD 5.1 Surround German, Spanish, Thai, and DD 2.0 Stereo Portuguese with subtitles in these languages and Chinese, Korean, Greek, Hebrew, and Turkish. Seven was originally released to film with a Bleach Bypass process applied to give it a characteristic washed out look. It lived that way on home cinema until the first DVD release, but by the time the Seven SE DVD turned up, digital colour grading had been invented, and director David Fincher applied that tech to Seven’s original negative to create a whole new experience. That is the Seven which is on this Blu-ray and it looks fantastic, with gorgeous, rich and lush colours that really work with the noir atmosphere of the story. Shadow detail is excellent, contrast is spot on, and even in this aging BD transfer, the quality of the detail is impressive. The audio too got reworked for that DVD re-release, and that sound mix really shines in its lossless form. The dialogue is clear, and it’s an excellent, immersive surround sound design that really gets under the skin. And I never realised that was Haircut 100 in the soundtrack!

You get one disc in a thin BD eco case, with bits cut out of the plastic; probably reason enough to get a local release, given that the disc seems to be universal worldwide. The disc boots to a simple static menu.

Once again, Warners ‘cheap out’ by just transferring all of the DVD content to the Blu-ray when it comes to extras. It’s not that bad in this case, as the 2 disc Seven SE was packed with goodies, and all that’s missing from this release is the DVD-ROM content (the script).

There are four audio commentaries with the film...

Production Designs is an 8:56 featurette.

Exploration of the Opening Title Sequence lasts 2:51 and is a multi-angle affair, with three video streams, four audio options, and two audio commentaries.

The Mastering for the Home Theatre featurette lasts 23:18, and it looks at the Audio Mastering, The Video Mastering, and the Colour Correction.

The Telecine Gallery is another multi-angle, multi-audio affair which looks at three scenes, a total runtime of 5:20.

Finally there is the Theatrical Trailer, which lasts 2:28.

Seven is still an astounding film. It’s not an easy watch; the subject matter and the gritty realism to the imagery still has the ability to shock over 25 years since I first saw it, and it goes some way to explain why I watch it so rarely, But each time I do watch it, I’m glued to the screen for the duration. Even though it’s effectively a cut-and-paste job from Warners as they do with so many of their back catalogue titles, transferring the DVD extras over, while the main feature gets HD video and audio upgrades, this is still a good disc, well worth seeking out while you wait for the inevitable 4k release.

Seven is a police procedural, a genre which is hardly underrepresented in cinema and TV, but the first thing that strikes you as different is the cinematography, especially in this re-mastered and colour-timed version. It’s a film noir for the modern age, its use of colour and composition startlingly different and which hasn’t been matched, even today.

What is still apparent now, and what so drew me to the film in the first place, is indeed the shock value. John Doe is a serial killer with a difference, committing his crimes with a sadistic brutality that even now is rarely portrayed on screen. The story delves into the darker recesses of human nature, which let’s face it, we tend to turn a blind eye to in the real world. This sort of thing and worse does happen, but we choose not to see it, a necessary choice that allows society to keep on functioning. Seven forces us to confront this side of humanity, and an occasional, short, sharp shock like this can be a useful reminder to fix what needs fixing.

But if Seven was all about the shocks, it wouldn’t be half the film it is. What makes it work, and work so well, is that it balances John Doe’s inhumanity with humanity. It’s the relationship between Mills and Somerset that holds the attention. Initially mutually antagonistic, the two begin to form a connection as they investigate the case. The impulsive Mills contrasts with the methodical and thoughtful Somerset, and they begin to balance and compensate for each other. The relationship takes on a personal aspect when Mills’ wife Tracy invites the veteran cop to dinner and we begin to know the characters on a deeper level. It’s this contrast between light and dark that plays through the film, until it collides in that unforgettable climax.

I will watch this Blu-ray again! I will watch this Blu-ray again! That’s a promise I’m making myself right now, as I have no intention of buying the film over again in yet another format, but that’s what I said when I bought that last DVD. Sometimes I get the feeling that I won’t stop until I own a cinema and have all my favourite films on 35mm. No matter where you may stand on the eternal double-dip, right now, this Blu-ray, old though it may be, is a great way to watch this masterpiece crime thriller.