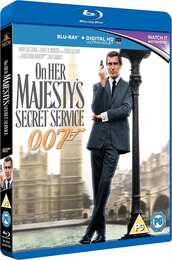 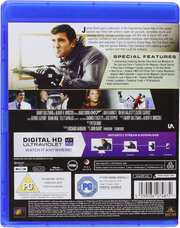 Review for On Her Majesty`s Secret Service

This one has always been the odd one out for me. On Her Majesty’s Secret Service is the Bond film that I have seen the least, to the point that I thought that this film was the odd, unofficial stepchild of the franchise, and Never Say Never Again was the official one. The film never filled the spectacular, action movie craving that I had when I was a younger fan, and it ended on a downer. Right now, I can’t even recall the way the film begins, with only the winter-sports section still in my mind. This would be the ideal time to rediscover On Her Majesty’s Secret Service, as it seems to have undergone a re-evaluation in recent years, with some critics even citing it as their favourite Bond movie.

Bond is on leave when he encounters Tracy, an intriguing woman with some self-destructive tendencies. Although when he tries to rescue her, he encounters a bunch of henchmen who don’t look too kindly on his attentions. He might have finally met his match; a woman who might be enough for him to leave the service for. But before he can do that, he has one lingering vendetta to deal with, finding and putting an end to Blofeld. The head of SPECTRE, the world’s biggest crime syndicate is notoriously hard to find, but Tracy’s father Draco heads the second largest syndicate, has reason to keep tabs on his rival, and is happy to see Bond take his headstrong daughter in hand, as well as point him to Blofeld’s current lair. On a mountaintop retreat in the Alps, Count de Bleauchamp has an institute researching a cure for allergies, and he wants a genealogist to confirm his title. Bleauchamp is French for Blofeld...

On Her Majesty’s Secret Service gets a 2.35:1 widescreen 1080p transfer with the choice between DTS-HD MA 5.1 Surround English, DD 2.0 Mono English, DD 5.1 Surround Spanish and Portuguese and DTS 5.1 Surround German and French with subtitles in these languages and Portuguese, Dutch, Finnish, Norwegian and Swedish. You might get the feeling that this film hasn’t had a lot of airings over the years, as the image looks astounding. It’s clear and sharp, with rich and consistent colours, and with excellent detail. The film makes use of some great locations and sets; the production design is the best yet, and there is a more realistic aesthetic (especially coming from the artifice of You Only Live Twice) that really impresses. The cinematography is really well done. I was also curious about the mono track; as most of the Bond movies I have seen on Blu-ray lack anything approaching an original audio track (according to IMDB, OHMSS was recorded on 4 track stereo), but alas, the mono track here is harsh and a little thin. I found the lossless surround mix more agreeable, clearer and warmer, even if some of the surround effects are forced. Besides, you don’t want any distortion to get in between your ears and Louis Armstrong.

You get one disc in a BD Amaray case with a UV code within. The disc boots to an animated menu. On the disc you’ll find the following extras.

Ministry of Propaganda has the Theatrical Trailer, TV Broadcast trailers x5, and Radio Communication with 7 trailers and interviews.

Finally the Image Database has 8 categories of images.

I note that the glossary of movie bookmarks is missing this time, but the Exotic Locations featurette is still there.

Having now seen On Her Majesty’s Secret Service for probably the first time in over twenty years, I have to say that I do have to revise half of my opinion of the film, but half of my opinion does still stand. It is definitely a better film that I originally gave it credit for, but for me it has a couple of flaws that really do hamstring it.

I do really appreciate the story in this film, probably the best Bond story until Skyfall, and were it not for those flaws, it would have been the best. I love Skyfall because the story is so personal to Bond, but it has to do so with a contrivance about his past, his childhood, that it has to work to make relevant, although the strength of his relationship with M really does make that film special. With On Her Majesty’s Secret Service, there is no need to contrive that connection. It’s up there, front and centre, with Bond actually falling in love, finding a woman who is his intellectual equal, and just as brazen and adventurous.

It also has Bond actually doing some secret agent-ing, adopting a persona and infiltrating the enemy’s lair undercover, playing the part of an effete genealogist in order to get close to Blofeld. And here is the first flaw in the film. In You Only Live Twice, Bond had a face to face confrontation with Blofeld, with the opening credits of this film establishing it as taking place prior chronologically to this one. It could be behind that throwaway line in the pre-credits sequence about “the other fellow”, but it’s something I just can’t get past in the film.

The second flaw, is for me the fatal flaw in the movie, that of miscasting. I just can’t buy George Lazenby in the role. He just comes across as a little gormless, a brawny goofball, although given that this was his first acting role; he just brazened his way into the part, it is a solid performance. It just doesn’t work for me as Bond, and he has none of the menace and strength of character that Connery brought to the role. Against this is Telly Savalas as Blofeld, who just has too much character for the role. He’s one of those classic actors from Hollywood who were cast for who they were, not for who they could become, and roles were shaped around them. Telly Savalas was Telly Savalas in every movie or TV show that I saw him in. His Blofeld wouldn’t seem out of place with a lollipop.

Good action and a great story should have made On Her Majesty’s Secret Service the best Bond movie. They really did make something epic and memorable. But in the end, it’s memorable for all the wrong reasons. They got the wrong Bond! The Blu-ray presents the film in an excellent light, and while I have complained about it in this review, I’d still much rather watch On Her Majesty’s Secret Service than something like Thunderball or Moonraker.

I agree with your criticisms, but still my 3rd favourite after Thunderball and You Only Live Twice...
posted by Si Wooldridge on 28/4/2021 20:39