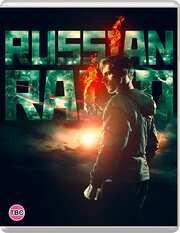 I think someone actually reads my reviews! Either that, or there is some cosmic sense of irony at work. A little while ago, I pulled Night Watch out of my un-viewed disc pile to review, and opined that the brief and abortive age of Russian blockbusters hitting Western multiplexes had long since passed. A few days after I posted that review, an unsolicited check disc arrived for an action movie called Russian Raid, actually made last year in Russia if the name felt like a misnomer. Politics and diplomacy may change from day to day, and year to year, but people the world over always want to be entertained. Russian Raid is inspired by Gareth Evans’ 2011 hit, The Raid.

Nikita was a mercenary working in some hairy foreign theatres, but one PTSD flashback at the wrong time, and he’s back home looking for work. He has that unique skill-set though, and he gets hired to implement a hostile takeover of a factory, with the emphasis on hostile. His team doesn’t look too promising though; they certainly don’t have a military mindset or discipline. That’s not a problem given the rentacops patrolling the factory, but it means trouble when they learn the identity of the factory’s true owner. And Nikita’s on a mission of his own.

Russian Raid gets a 2.35:1 widescreen 1080p transfer, with DTS-HD MA 5.1 Surround Russian and with English subtitles. The image is clear and sharp, as flawless as you’d expect from a recent digitally shot film. There are no visible issues with compression or banding. There is some serious colour timing at work to give the film a suitably grim and cool action look. There’s plenty of fast-paced MMA action and gunplay, and while there is lots of CG blood spray, the muzzle flashes on the guns come with associated recoil, suggesting a fair bit of practical production value in the film. The action is fast and frenetic, choreographed and enacted well, and enhanced with fast cut editing, jump-cuts, and under-cranking to speed things up, although I’m not sure how digital cameras are under-cranked. The audio is great in bringing across the action, and the dialogue is clear throughout. The music really drives the pace of the film well. The subtitles are accurately timed, but could have used some proof-reading, although this isn’t a film where the subtleties of the narrative are played out in character discourse. It would also have been nice if the lyrics to the end credit theme song had been translated.

The disc boots to a static menu, which offers you the choice of playing the film, or selecting one of the 12 chapters. There are no extras on this disc.

Films like The Russian Raid aren’t about the story. These movies are stunt and action showcases, a 1 hour 45 minute calling card for the debut director, the actors and the stunt performers. And it really does work. It’s a film that grabs the attention early on, and holds it for its run time, as various characters do battle, either hand to hand, or though gunplay. It’s easy for such films to become repetitive and even tedious when the action becomes monotonous, but that never happens in Russian Raid. Through great stunt co-ordination, action design, and inventive storyboarding, this is a visually oriented and visceral action film that satisfies the primitive bone-crunching urge that we try to downplay in our psyches. I can see Russian Raid becoming a guilty pleasure in many film collections.

However, Russian Raid is unashamedly a modern action film, cut from the same cloth as the John Wick films, and the Liam Neeson revenge movies when it comes to humourless storytelling, not that there is much story in Russian Raid. There’s not a lot of character either, certainly no one who grabs the attention in the same way as the action, and certainly no one to root for, or invest emotionally in.

This is a problem as the film begins, as I had just an academic interest in the story. Without any quirk, or sense of individuality, Russian Raid felt quite sterile, and other than a solitary flashback scene at the start, the film did nothing to engender sympathy, even for the protagonist. Given the relentless action in the film, only briefly pausing to take breath, there’s not a lot of room for character development and story progression, but Russian Raid does actually find the space. It eventually gets around to revealing the main character’s motives, and the history behind all that, but you have to invest in the film and go along for the ride, without any suggestion of a pay-off during the first hour or so before it starts to deliver, and that might be a bit much of an ask for some, from a rather humourless and grim action film. Yet by the end of the film I was satisfied by the experience.

Russian Raid isn’t going to fill any multiplexes, but it’s just the sort of thing for the Friday night beer and kebab crowd, something to wind down to and throw popcorn at after a night out with the mates (remember nights out? sigh...) It will happily sit on my shelf next to the Tak Sakaguchi movies like Re:Born and Deadball, although it doesn’t have the same kind of comic irony as the latter or Yakuza Weapon. It’s a solid presentation for the film on Blu-ray, although the lack of extras is disappointing, the kind of thing that might make you opt for the digital version streaming instead of adding it to the home cinema library.