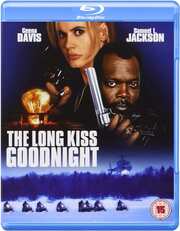 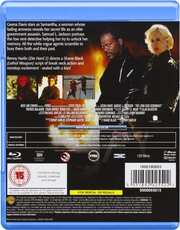 Review for The Long Kiss Goodnight

Before there was Salt, and before Jason Bourne, there was another amnesiac secret agent kicking arse on her way to discovering her past. Twenty five years after my friend recommended it, I’ve finally got around to watching The Long Kiss Goodnight. It’s an action movie from Renny Harlin, he of Die Hard 2 and Cliffhanger fame, starring Geena Davis and Samuel L. Jackson in a buddy road movie dynamic from the pen of Shane “Lethal Weapon” Black. With that kind of pedigree, I really ought to have seen The Long Kiss Goodnight when it was first released, but it’s just that one year previously, Renny Harlin and Geena Davis made Cutthroat Island. It took this long for my wariness to ebb.

Samantha Caine is a gentle, beloved schoolteacher, who lives an idyllic small town life with her daughter Caitlin, and her fiancé. And she’s effectively only eight years old. She was found, washed up on a New Jersey beach eight years previously, pregnant and suffering from amnesia, and has rebuilt her life from then, employing the occasional private detective in the hope of finding her past. But time runs out when she takes part in the town’s Christmas parade and makes an appearance in a TV news report.

Certain people have seen her, and have seen a loose end that they had thought previously tied up. Who Samantha Caine used to be was a threat to them eight years ago, and even more of a threat to them now, and they will do what it takes to end that threat. Samantha Caine will have to uncover her past if she’s to survive, and the only help she has is from a low-rent private investigator named Mitch Hennessy.

The Long Kiss Goodnight gets a 2.40:1 widescreen 1080p transfer on this disc, with the choice between DTS-HD MA 5.1 Surround English, Dolby Digital 5.1 Surround German, and 2.0 Stereo Spanish, with subtitles in these languages. It’s a decent transfer of a back catalogue film, which hasn’t had a lot in the way of restoration or post-processing applied. The image is clear and sharp, detail levels are good, and colours are consistent if a tad muted. A nice level of grain is present, and it all looks very acceptable. The audio is fine, certainly emphatic when it comes to the action sequences, the surrounds put to really good use. The dialogue is a little low in the mix though, and this might be one film where you have to ride the remote for the duration.

You get one disc in a BD Amaray case which boots to a static menu. The sole extra is the Theatrical Trailer (2:32 SD).

Action movies used to be fun, tongue in cheek escapism where audiences could get a visceral sense of euphoria at seeing good guys take down bad guys in as spectacular and explosive ways as possible. Somewhere along the line, the action movie came to a fork in the road. The fun aspect turned one way, and the heroes donned spandex and started wielding superpowers, wisecracking their way through CGI overpowered action sequences. The other fork was taken by the Liam Neeson revenge movie, the modern incarnation of Charles Bronson. These are the Takens, the John Wicks, the gritty, gut-wrenching action movies that get up close and personal with the violence, and usually leave a nasty taste in my mouth when I watch them.

Most of the action movies that I like come from before that fork occurred, before the superhero movies filled the multiplexes, back when action movies were really the comic book movies that we all went to see each summer. The Long Kiss Goodnight may not be the last of these films, but it may just be the peak of them, the high point of the genre, where the characters were almost too large for the screen, the action was almost too absurd (seriously, there is a shotgun in this movie that is ridiculously powerful), and the violence is just on the verge of being ludicrous. The Long Kiss Goodnight is as nutty as action movies ever got, and I have to admit that watching it last night was a guilty delight. I shouldn’t like something this daft as much as I do. Part of me regrets leaving it this long to watch it, but the other half of me is glad that I did, that even after 25 years, there are still movies like this, classics of my then favourite genre left to discover.

The Long Kiss Goodnight is fun. When it comes to amnesiac secret agents, Jason Bourne plays it a little more seriously, and when it comes to butt-kicking female secret agents, Salt leans more towards that slight nasty taste in my mouth I mentioned earlier. But this movie keeps its story and its characters on the cheesy side, in a good way. Samantha Caine is a seriously frumpy character to begin with, a schoolteacher who is not all that well co-ordinated, but living a happy family life with her daughter and her fiancé. Charly Baltimore on the other hand is a foul-mouthed, outrageous and overly skilled assassin. They just happen to be one and the same, separated only by a bout of amnesia. The amnesia starts to be undone when Samantha hits her head in a car accident, which is useful, as she’s just been noticed on TV by her former employers, employers who now want her dead before she can uncover their nefarious plans. Samantha needs to uncover her past quickly before this happens.

Helping her is Mitch Hennessy, a PI who drives a crappy car, the kind of man who uses his assistant to entrap gullible men in prostitution stings so he can shake them down for money, pretending to be a cop. That he used to be a cop gives him a little edge, but it’s still a sleazy way to make money. Helping Samantha is a little more respectable, but he’s still throwing around his PI credentials and testosterone to impress the small town schoolteacher. But then her memory starts to come back in weird ways, and slowly the balance between them starts to shift, so much so that he winds up completely out-testosteroned and pretty much a sidekick.

There are all manner of villains arranged against them, from the high-up bureaucrats, to the cannon fodder, although the first bad guy that Samantha has to deal with (the one with crazy shotgun) is set up as a bit of red herring, built up bigger than he actually turns out to be. The real antagonist of the piece is the rather plainly named Timothy, played with scenery chewing abandon by Craig Bierko, who up to this point I only knew as the guy that played Dave Lister in a couple of failed US Red Dwarf pilots. He’s definitely better as a slightly deranged villain.

The action and the story are both so over the top that it’s hard to take it seriously, but that is the whole point. The Long Kiss Goodnight comes from a tradition of Hollywood action films that is played completely tongue in cheek, and you rely on the characters and the writing to elevate the film. The chemistry between Samuel L. Jackson and Geena Davis, coupled with a delightful script from Shane Black makes The Long Kiss Goodnight a classic of the genre, and well worth seeking out, even on this rather vanilla Blu-ray.