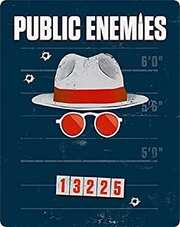 I don’t like Steelbooks as a rule; they tend to come pre-dented, and I don’t ever want to worry about my movie collection rusting. But when a steelbook Blu-ray release is on a pound shop shelf, it seems petty to complain. Besides, Public Enemies is a Michael Mann crime thriller, the director behind the superlative Heat, and the brilliant Insider. In Public Enemies he takes on the legend of John Dillinger, the last of the populist outlaws, and to all intents and purposes, Public Enemies promised to be something like a cross between Heat and The Untouchables, something I’d be keen to get behind.

It’s 1933, the height of the Great Depression, back when public opinion was firmly against the greedy banks, and they were happy to support the flamboyant bank robbers that were making headlines. After nine weeks out following a ten year stint, John Dillinger returns to prison. He’s not there as a convict though. He spent his ten years inside learning how to rob banks from the experts, and the people that he wants in his gang are still inside, and he needs to break them out.

It isn’t long before he’s making headlines, and capturing the public’s hearts by refusing to take the bank customers’ money, only stealing from the vaults. For J. Edgar Hoover, director of the Bureau of Investigation, it’s particularly infuriating, as his G-Men are still refused the federal jurisdiction to investigate interstate crimes. He puts sharpshooter Melvin Purvis in charge of the office in Chicago, and charges him with bringing down John Dillinger and his ilk. But in his desperation to get Dillinger, Purvis skates closer and closer to the edge. Meanwhile John Dillinger has fallen in love.

Public Enemies gets a 2.40:1 widescreen 1080p transfer with DTS-HD MA 5.1 Surround English, Dolby Digital 2.0 Stereo English Audio Descriptive, and DTS 5.1 Surround French and Spanish with subtitles in these languages. It’s not good all around. Michael Mann was pretty early to embrace digital filming, and while it works with films like Collateral and Miami Vice, it’s completely out of place in this period film. Public Enemies has the sepia colour timing that you’d expect from a film set in the 1930s, but the digital camerawork, and the proliferation of handheld shots looks completely out of place. While the image can be clear and sharp, with excellent detail in bright scenes, the softness apparent in lower light scenes, the tendency for ghosting and smearing makes the film look like soap opera at best, home video at worst. The surround is effective, certainly when it comes to the action, and the bass booming music score that usually is kept only for movie trailers, and once again a Mann movie has realistic gunshots. But the problem here is that the dialogue is so low in the mix that you have to ride the remote, and the actors mumble their lines on top of that. Twenty minutes in, I had turned the subtitles on, and wound up watching the film through that way.

You get one disc in a steelbook case. Mine hasn’t rusted as yet. The disc boots to a stock Universal animated menu.

You get the usual U-Control option, which lets you access a Historical Interactive Timeline, or a Picture in Picture option during playback. There are no subtitles for these, so you’ll have to mess around with your secondary audio settings.

There is also an audio commentary from director Michael Mann during playback.

The following featurettes are on this disc.

Finally there is the Gangster Movie Challenge Game.

I didn’t realise how much of an effect the medium could have on a piece of entertainment, but Public Enemies clearly demonstrates just what happens when you get it wrong. A film set in the thirties should not have been shot digitally, certainly not the digital technology used in this 2009 film which actually looks ten years older than it is. On top of that, the modern filming and editing techniques gives an incongruous blend of modern and vintage which doesn’t serve the story well. Public Enemies is an ugly looking, and more tellingly, cheap looking movie that really should have been shot on celluloid, or Mann could have waited five years and used digital cameras that give close to celluloid results.

This is actually the least of Public Enemies problems, as it really is quite disappointing as a story in itself. It seems as if Michael Mann simply transplanted Heat’s story into a vintage setting. You have ambiguousness when it comes to antagonists and protagonists, with the fledging Bureau of Investigation using questionable methods to achieve their aims, upholding the law by breaking it, while Dillinger and his ilk are seen as heroes on a par with Robin Hood, sticking it to the evil banks. Just like De Niro’s character, Dillinger is ultimately undone by his love for a woman, and his inability to walk away, when he professes a professional approach to his work. There is even a confrontation between both antagonist and protagonist where they swap philosophies before their battle resumes. But Johnny Depp and Christian Bale are no Pacino and De Niro.

There’s one thing I did appreciate in this film, the look at what would become the FBI in its formative years. There’s a mix of the old school and modern (for 1933) technology in the way they pursue the investigation, with Purvis bringing in experienced trackers and hunters to bring down the thieves, but also using modern investigative techniques, including early wire-taps (with telephone audio recorded on vinyl) to get inside the criminals’ mindsets; to predict where they would turn up. There’s also something to the romance of the era, back when criminals were still lauded for their notoriety, were seen as antiheroes, rather than just vilified by the press.

Maybe there could have been something to Public Enemies, but a second rate remake of Heat, on a hideously offensive visual format, with inaudible dialogue... Quite frankly, the extra features on the disc that look at the real life Dillinger are more interesting than the film itself. This is one disc that is something you should go out of your way to avoid.

I remember starting to watch this and having to stop because of the dialogue, I thought the disc was bad.
posted by Robee J Shepherd on 31/3/2021 08:35