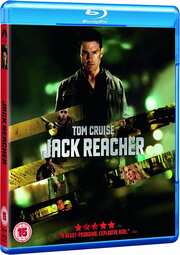 I’m struck with first world problems again. I wander into a pound store, and find a copy of Jack Reacher Never Go Back on the shelf, and at that price I’m willing to give it a try. Only then I learn it’s a sequel to a film I’ve yet to watch, and naturally that isn’t in the bargain bucket I’ve just perused. I wind up getting the original film second hand, even cheaper, but it’s funny how I can find a way to complicate the simple act of watching a movie for myself. With all this, Jack Reacher had better be good. On the bright side, I haven’t read any of the original books, so I don’t have any preconceptions about Tom Cruise not being of the correct stature to play the role.

A mass shooting, a sniper firing at random at people on a plaza leaves five dead, and the evidence quickly leads to a likely suspect; a military veteran with a dark past. The police and the district attorney pressure him for a confession, but all he writes is “Get Jack Reacher”

Reacher’s an enigma, also a war veteran and he’s a former military policeman. But one who lives off the grid and is impossible to find, so the police are shocked when he just walks in. He’s no saviour though. He knows the suspect, and he’s just here to see justice done. Yet the defence attorney sees the chance to get a proper investigation done, rather than the open and shut case the state is pursuing. But there are those who will kill to avoid a proper investigation.

Jack Reacher gets a 2.35:1 widescreen 1080p transfer with DTS-HD MA 7.1 Surround English, with Dolby Digital 5.1 Surround French, German, Italian, Spanish, and English Audio Descriptive, with subtitles in these languages and Danish, Dutch, Finnish, Norwegian, and Swedish. The action comes across well in a nice and immersive soundtrack. The dialogue is clear throughout, and the film gets a memorable and distinctive music score. The image is clear and sharp, detail levels are excellent and there are no issues with compression or the like. Contrast is good in a recent film, with deep blacks making the film’s several night time sequences come across well. But it is another orange and teal action movie.

You get one disc in a BD Amaray, which boots to an animated menu.

On the disc you’ll find two commentaries; the one with star/producer Tom Cruise and director Christopher McQuarrie is quite informative, while the commentary with composer Joe Kraemer is more of an isolated score with the odd interjection.

When the Man Comes Around is the making of featurette, which lasts 26:49.
You Do Not Mess With Jack Reacher: Combat and Weapons lasts 10:27.
The Reacher Phenomenon looks at the novels and lasts 11:10.

With no experience of the Jack Reacher character, I could only take the film at face value as it unfolded, and I had a completely different expectation of where the film was heading. With a suspect in custody, charges filed, and a seemingly open and shut case, I thought Jack Reacher would be in the A Few Good Men canon. I was looking for a shouty Jack Nicholson type in the credits, but instead, Jack Reacher turns out to be more of a dumb action movie, with delusions of smart.

It has an initially compelling premise, with a mass shooting leading to a quick arrest, and the police and the prosecutors rushing through the process. As ever in such films, only one lone voice wants due procedure to be followed, and here there is the added complication that the defence counsel is the daughter of the DA, and the two have personal as well as professional issues.

Into this incident comes Jack Reacher, charismatic drifter with a past, and who values right and wrong, justice over the letter of the law. He knows the suspect, and is really there to see him face justice, but the defence attorney, Helen asks just the right questions to pique his curiosity, and start him asking awkward questions in turn. He winds up uncovering an ominous conspiracy, and soon people are trying to kill him.

It’s around this time that the film shifts from interesting crime procedural to high adrenaline action movie, and it’s also here that the intelligence in the script drains away. The villains of the piece turns out to be so over the top that you’d expect them to be motivated solely by the twirling of their figurative moustaches than something as crass as profit. The mastermind behind the plot is so laughably, demonstrably malicious, that you have to ask why anyone would follow him.

The film complicates matters by introducing a comedic level of sexual tension between Jack and Helen, far from appropriate with regards to the situations they find themselves in, and making it impossible to take the film seriously. Jack Reacher turned out to be another film where I had to do a cognitive reset while watching it, lowering my expectations and re-categorising it as the silly action movie that it is. 30 years ago, it would have been Arnold Schwarzenegger in the title role, and I would be watching the film purely for the fun of it. And in the end, Jack Reacher is a lot of fun to watch. The story holds up, the action is excellent, and the characters are large enough and colourful enough to fill the screen. Just don’t expect anything more than that.