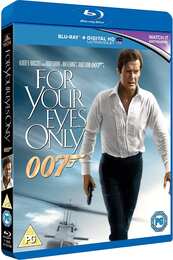 For Your Eyes Only (Blu-ray Details) 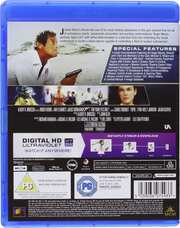 DVD
For Your Eyes Only: Special Edition (James Bond) (UK)

Review for For Your Eyes Only

When I recently reviewed Moonraker, I opined that it was the first of the worst of the Roger Moore Bond movies, with the apparent age of the actor only the first problem in a series that was rapidly descending into farce and self parody. Given that Moore’s run ended with Octopussy and A View To A Kill, you can see why I have that opinion, but the film that followed Moonraker, this For Your Eyes Only, almost managed to buck the trend. I’d say it was the last decent Roger Moore Bond movie. I’ve certainly enjoyed it each time I’ve watched it, although it’s been a good long while since I last did. Let’s see if this film still stands up, 40 years after its theatrical release.

A fishing trawler is sunk when it pulls up an old wartime mine. This would normally be an innocuous tragedy, but the trawler was a cover for a secret service listening operation, and an advanced bit of kit called the A.T.A.C went down with the ship. It’s technology that the KGB would love to get their hands on, and it sets off a race against time to retrieve the A.T.A.C. A marine archaeologist named Havelock was meant to do this, but he and his wife were killed by a Cuban assassin. Now it’s up to James Bond to find the assassin and who hired him, and get the tech back before the Russians can. The trail leads across the Mediterranean, but getting in his way is a young woman named Melina, intent on avenging her parents, the Havelocks.

For Your Eyes Only gets a 2.35:1 widescreen 1080p transfer with the choice of DTS-HD MA 5.1 Surround English, DTS 5.1 Surround German and French, Dolby Digital 5.1 Surround Spanish and Portuguese, with subtitles in these languages plus Danish, Dutch, Finnish, Norwegian, and Swedish. It’s a strong transfer, clean and crisp with excellent detail, bringing across the film with a nice level of grain but free of print damage and dirt, thanks to another Lowry 4k restoration. I did feel that reds were pushed a little strongly, and made some elements of the image stand out a little too much. The audio is fine and immersive for the most part, especially with the music and the action, but I did feel that the dialogue was a little low in the mix, and I found that I was riding the remote for the duration of the film.

You get one disc in a BD Amaray case, and with a UV code. The disc boots to an animated menu.

The latter three are mini behind the scenes featurettes.

007 Mission Control offers the usual collection of character bookmarks to the film, and a 5:02 travelogue looking at the locations.

Mission Dossier has the interesting 29:48 Inside For Your Eyes Only documentary. There are also a couple of storyboards and the Sheena Easton music video.

Finally there is the Image Database, offering 15 categories of Photo Gallery.

They almost got it with For Your Eyes Only. You can hear in the extras and the commentaries that after Moonraker, the brief was to bring Bond back down to Earth, both literally, and in terms of the character as well, leaving the gadgets, the megalomaniac super-villains and the volcano bases behind. For Your Eyes Only manages that much at least, but it holds onto a couple of the weaker aspects of the Moore movies that stop it from being a great entry in the franchise.

It is back to basics though, with the maguffin in the movie, the eighties equivalent of an Enigma machine, a bit of communications tech that would compromise British defence it falls into the wrong hands. Bond’s mission is to find the assassins who took out the UK assets that were initially tasked with retrieving the machine, and also find the machine itself. In Melina, you have a Bond girl with a mission of her own, seeking revenge against those that murdered her parents, and given that Bond needs certain people alive long enough to answer a few pertinent questions, they start off working at cross purposes.

On top of that you have the villains of the piece, although the film does try and keep it obscure at first, suggesting that both Bond and MI6 are being played. You have Julian Glover as the suave and erudite Kristatos, a man honoured by Britain for his heroism in the Second World War, and who still often helps the British as an informer and more, and he points the finger at smuggler Columbo, played with brilliant charisma by Topol. But as Bond investigates Columbo, it becomes clear that the truth is being manipulated. You have a revenge plot, and you have characters plotting against each other, and you have Bond in the middle. It should have been a great entry in the series.

For Your Eyes Only even goes as far as addressing the elephant in the room, at least to a point, that of Moore’s and Bond’s age. The pre-credits sequence makes reference to On Her Majesty’s Secret Service and acknowledges the passage of time between the two stories. And in this film, there’s a girl who throws herself at Bond that even he doesn’t touch, recognising the inappropriateness of the age gap. But ultimately what hamstrings For Your Eyes Only is the same thing that did for most of the later Moore Bonds, the misplaced sense of humour. This film does go to some dark places, with the explorations of its characters and revenge, but it also still has the daft gags, the goofy music cues and the wacky sound effects to remind you to laugh. Even with this, it still manages to engender enough goodwill to end on a positive note, until the usual post action, pre-coital coda that the Moore movies got, which throws in Janet Brown doing a Margaret Thatcher impersonation.

With For Your Eyes Only, it’s as if someone took a great Bond movie, and a rubbish Bond movie, slammed them together, and this is what we get. It’s still the best of the latter Moore movies, and it’s well worth watching, certainly better than what was yet to come. The Blu-ray has its issues with sound balance and red push, but it’s watchable enough. And it’s still available on many Poundland shelves as I write, so you won’t break the bank giving it a try.