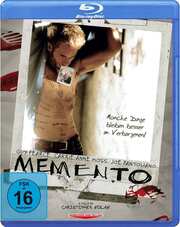 I can’t remember why I bought this from Germany, as I’m sure the UK release was cheaper even then. Of course memory loss is appropriate given that I’ve just double-dipped to Blu-ray for Memento. A quick look at Blu-ray.com reveals issues with the UK Blu-ray release from Pathé regarding the pitch of the audio, and the fact that the notorious Easter Egg is in SD. The German release from Eurovideo doesn’t have these issues, so that must be why I ordered that one. I really should write these things down... or tattoo them.

Leonard Shelby is a man who thirsts for revenge. His beloved wife was murdered in a vicious attack that left him brain damaged. He can no longer make memories. All that he experiences and does fades from his mind not long after. His last permanent recollection is the death of his wife. His only methods of recall are to make notes and tattoo information on his body. Helping him find the killer are Teddy and Natalie, two people who have agendas of their own.

Memento gets a 2.35:1 widescreen 1080p transfer with optional DTS-HD MA 5.1 Surround German, PCM 5.1 and Dolby Digital 5.1 Surround English with English and German subtitles. It’s a solid transfer, clear and colourful with good detail and no signs of compression. There is the odd scratch on the print, particularly in the monochrome scenes, and there is a slight softness to the image that suggests the film hasn’t been re-mastered for this release. The dialogue is clear, and the surround is immersive without be obtrusive.

You get one disc in a thin BD Amaray with a reversible sleeve to get rid of that giant ratings logo. The disc boots to an animated menu.

The extras will be familiar to fans of the various DVD releases.

The Easter Egg is present, allowing you to play the film in chronological order. It’s in full HD, runs to 108:19, and is re-edited from the main feature on the disc. As a result there is a pause and clunk from the player every time the read head jumps to a new point on the disc.

The commentary from director Christopher Nolan is here.

“Memento Mori” is the short story from Jonathan Nolan, and is offered here in German or English text.

The Cast and Crew biographies and Production Notes are here, but in German only,

Finally there are German language trailers for Memento, The Wedding Planner, Haunted Hill, The Gift, Drowning Mona, and Brotherhood of the Wolf.

What is it that they say about first impressions? Memento was my first encounter with the work of Christopher Nolan and in my mind, he has never bettered it, although I have to admit to having a soft spot for his Dark Knight trilogy and the blockbuster Inception, and I do feel he got close with Insomnia. He’s a technical director, with a love of actual film that I can appreciate, and he’s become the master of the fractured narrative, using film editing to create mystery and suspense in storytelling that is nigh on peerless.

Yet it’s practically his debut feature, his introduction to the world that I still feel is the zenith of his achievements. In my mind it’s because it’s in Memento that he really nails the balance between storytelling, character, and emotion. Subsequently, I’ve felt the clinical aesthete at work in later Nolan films, particularly Interstellar and Inception, where it seems the joy is in the problem, the enigma, while the characters never feel as real to me as they do in Memento.

You can’t get more visceral an emotion than a thirst for revenge, the combination of grief and rage that impels the main character, Leonard Shelby. With his short term memory loss, he has no choice but to make notes, and tattoo vital information on his body, as he goes about investigating his wife’s murder, the incident that stole his ability to make new memories. You’d actually think that it would be an impossible task, but with the aid of a Polaroid camera, he’s managed to work out a system.

To emphasise this, the film plays in reverse, from the moment of his revenge, backwards in time, adding the pieces that cemented his investigation, the reversed form emphasising his lack of memory, making each new development feel like a mini-story in itself. Against this, the monochrome segments play forward in time, more of a conventional narrative that puts into context his ailment, his history, and the motive behind his revenge. It’s a genius way of telling the story that would have been so easy to get wrong, but is perfectly paced and weighted here.

What really makes Memento work in my mind however are the characters, Leonard Shelby carrying the movie, Teddy, the man helping him on his search, and Natalie, a woman Leonard meets in a bar. Each time Leonard encounters them, he has to get to know them anew, and it also means that we get a new layer of these characters, as it quickly becomes clear that they both have agenda, and are in different ways, making use of Leonard for their own purposes.

I’d say that this version is the one to get, as the US release of Memento is locked to Region A, including the superior 10th Anniversary release, while the UK release has its flawed audio. Then again, Brexit, Covid and the rest means importing Blu-rays from Germany right now will require a fair bit more expenditure than it did when I bought this disc.