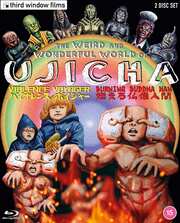 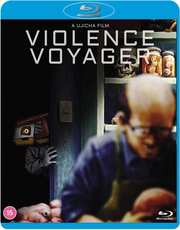 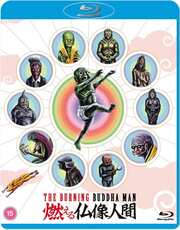 In Japan, the word “anime” refers to all animation, but consumers in the West have narrowed its definition considerably, still debating at its borderlines, but generally applying it to the kind of animation I write most about, the shows with the cute girls with big eyes and tiny mouths, the shows with the bright colours and reduced frame 2D animation. So it is when something that doesn’t conform to that ideal comes from Japan, we start looking for other descriptors. The director Ujicha has a completely different approach to his animation, creating hand drawn paper puppets with vivid colours that inhabit colourfully imaginative and unsettling worlds. Readers of a certain age might be thinking of Captain Pugwash at this point, and you’d technically be right, but you’d also be totally wrong. I had seen nothing like these films before. 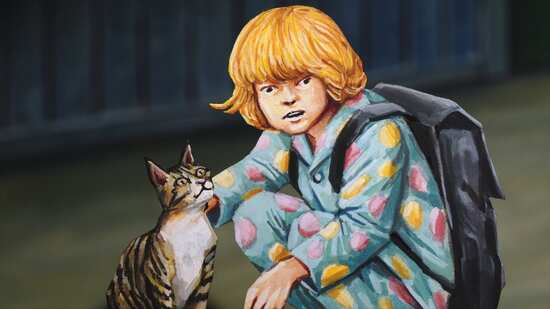 Third Window Films are bringing two Gekimations to the UK in this two disc collection, along with a handful of shorts and extra features.

Bobby and Akkun are best friends. Akkun tells Bobby that he has learned of a short cut across the mountain, which is useful as their friend Takaaki has moved away, and they could go and see him using the short cut. They are warned not to cross the mountain, but kids being kids, they go anyway. It isn’t long before Bobby is distracted by a sign for a theme park. They wind up at the Violence Voyager Theme Park, an attraction that immerses its guests in an alien invasion storyline. It’s fun at first, but then Bobby and Akkun discover some other kids, kids who’ve been there for days, and haven’t been allowed to leave. 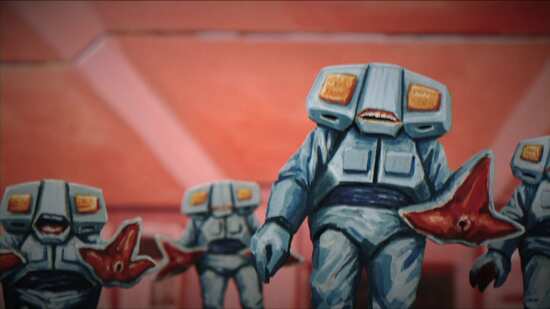 Violence Voyager gets a 1.78:1 widescreen 1080p transfer with DTS-HD MA 2.0 Stereo Japanese and with optional English subtitles. There is one problem on this disc; at 2:32 into the film, the image freezes for a handful of frames and the sound drops out. This is an annoying glitch, but doesn’t mar the film considerably. It feels more like a bad layer change on a DVD. Otherwise the image is clear and sharp, with strong consistent colours. The animation is smooth and well accomplished for what it is, and there are no visible issues with compression and the like. The dialogue is clear, and the subtitles are accurately timed and free of typos. The soundtrack is dissonant and unsettling, which contrasts with the art style, at least at first. As mentioned, the animation is accomplished with paper marionettes, 2D characters moved physically through a 3D space. The art style is reminiscent of the Ladybird books I read as a little child, which is certainly jarring given the horror and gore the film ventures into. The animation style is interesting in that it allows for parallax and shadows created in real time in camera, which is really quite dynamic, given how static the characters remains in each scene. 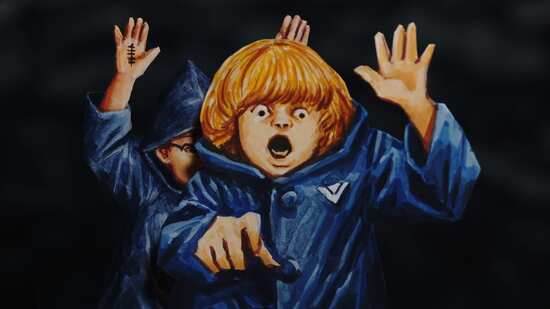 With the film you get an audio commentary where producer Reo Anzai interviews the director/writer Ujicha. 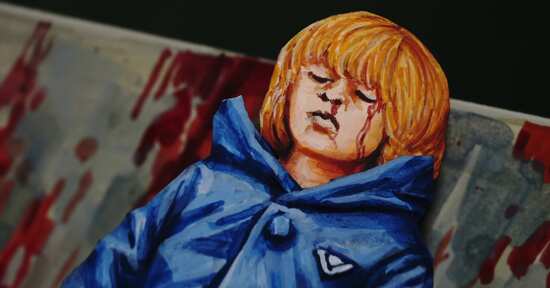 The film’s trailer lasts 1:30.
There is a video interview with director Ujicha which lasts 21:00 preceded by a disclaimer that it was recorded under less than satisfactory COVID secure conditions.
There are 1:10 of Storyboards for the film.
The Tempura Short Film lasts 3:39, an early iteration of Violence Voyager.
Director Ujicha’s Latest Film Teaser lasts 0:23. 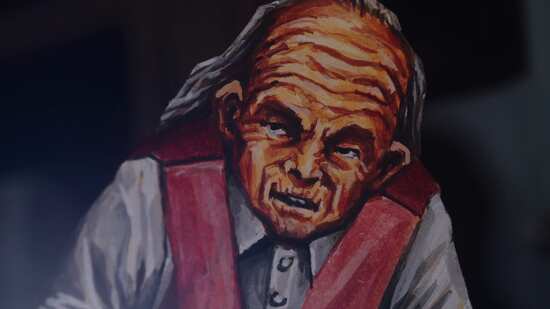 I certainly was eager to watch this film as a form of Japanese animation I hadn’t seen before, and I have to say that I certainly wasn’t disappointed when it comes to the striking visual aesthetic. Violence Voyager is unlike anything I have seen before, a blend of seemingly child-friendly visuals with a stark and horrific narrative. I recall the BBFC demanding a cut to Satoshi Kon’s Paranoia Agent regarding suicide imagery involving a child. This collection has a 15 rating, and what the story does to its juvenile and infant characters chills the spine and turns the stomach. And with my vertebrae iced, and my guts rotated, I have to say that I couldn’t get into Violence Voyager, as once again my customary disdain for the horror genre left me cold. It’s something I could really only appreciate on the aesthetic level, marvel at the inventive visuals, and the way the narrative has been styled. 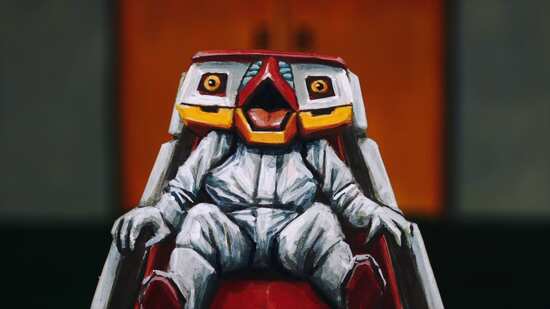 I can’t reiterate enough just how effective it is to see the incongruity between the visuals, straight out of a picture book, and the horrific nature of the story that unfolds. It starts off as a grand adventure, as Bobby and his friend Akkun decide to take the shortcut across the mountain, although they’re initially introduced as geeky outsiders shunned by other school kids. There are plenty of red herrings and false starts with the eerie music counterpointing the lush visuals, and when we see Bobby’s bedbound mother, and the ominous presence of his father, you might be led to believe the film will go in another direction. There’s also the moment when the boys encounter the creepy mountain man and his chimpanzee, although the old man is ambiguous when he warns them to turn back. They ignore him and head on. 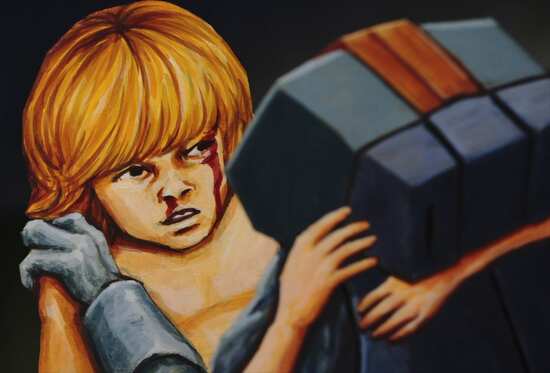 The real horror starts when they discover the theme park, seemingly abandoned, but whose owner is eager to show off, letting them in free as long as they go back and tell their friends. The theme is alien invasion, and they’re supposed to role-play brave survivors, fighting the alien robots with water pistols. But the truth behind the park is far more terrifying, taking the boys on a chilling adventure as they learn that kids don’t leave this park, they get trapped in a deadly nightmare of seemingly real killer robots, and extreme body modification horror. 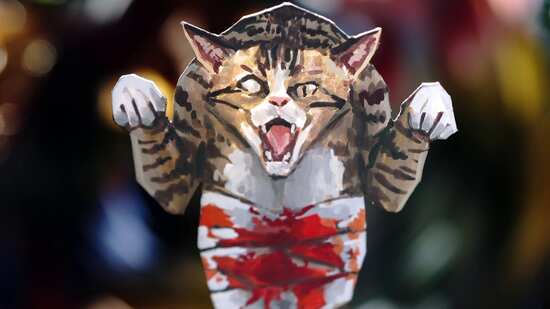 This is a film that would never be made in live action, its subject matter and how it conveys its story is so warped and twisted that your inner Mary Whitehouse might be triggered, causing concern for the mental welfare of its creator. But Violence Voyager is at its heart a modern day Grimm fairy tale. Stories like Hansel and Gretel were dark and scary, and warnings to children to stay on the straight and narrow. Well, should a child somehow wander into a screening of Violence Voyager, they’ll think twice about taking strange short-cuts, wandering alone into abandoned theme parks, and taking freebies from strangers. I just wish I was a fan of horror so that I could better appreciate it. 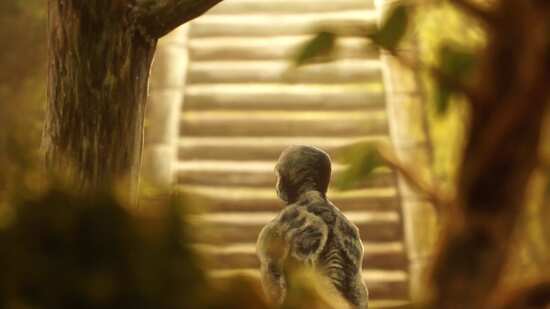 Beniko’s family lives in a shrine, but one day she returns home to tragedy. Her parents have been killed, and the Buddha statue taken. At the funeral, a priest named Enju from a neighbouring temple offers her a place to live, and also tells her of the Seaddhatta group, criminals who are stealing Buddha statues through arcane means. But the creepy monks at Enju’s temple, and the number of statues there give Beniko pause for thought. By entering that temple, she’s uncovered an ominous secret, a secret that her grandmother is party to. The problem is that her grandmother has been in a coma for 20 years. 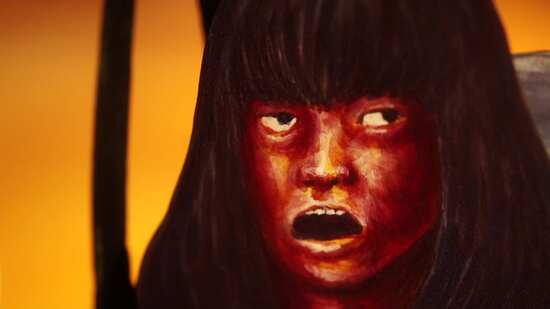 The Disc: The Burning Buddha Man

The Burning Buddha Man gets a 1.78:1 widescreen 1080p transfer with DTS-HD MA 2.0 Stereo Japanese audio and optional English subtitles. The image is clear and sharp, on a par with Violence Voyager (albeit without that pesky frame drop), with rich vibrant colours and excellent detail. There’s no sign of compression or the like, while the sound is clear, even if the dialogue is a little low in the mix. The subtitles are accurately timed and free of typos. Unlike Violence Voyager, which unsettled from the off with its picture book style, there’s none of that false sense of security in The Burning Buddha Man, with its cast of grotesques indicating its horrific intent from the off. 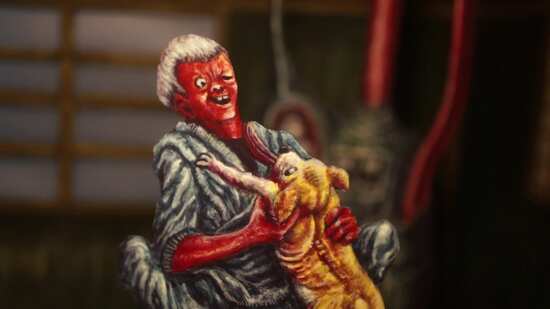 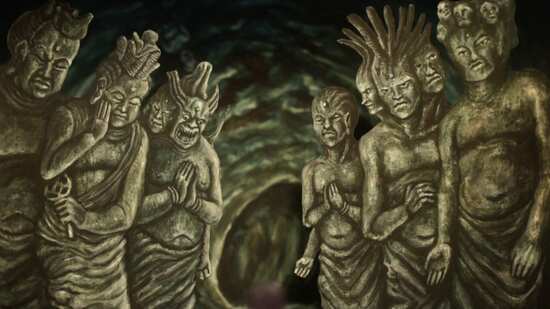 I think one was enough for me when it comes to Ujicha and Gekimation. Then again, Violence Voyager had that unsettling deceptive air to it, of a children’s picture book gone horribly wrong. The Burning Buddha Man has no pretence to it, it’s full on, body modification horror from the beginning, and it doesn’t mince any words. A girl whose parents are brutally slaughtered winds up in the wrong temple, and all manner of horrors unfold as she uncovers the place’s secrets. And just like Bobby, she isn’t untouched by the experience. 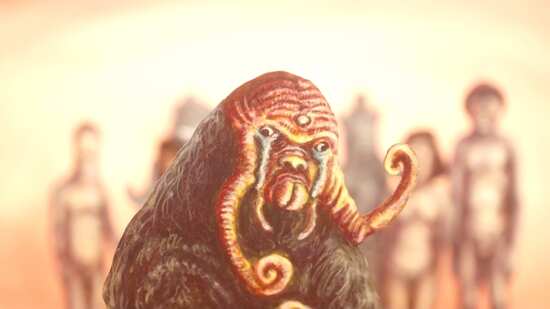 It’s a cast of grotesques from the beginning, and unlike the sense of originality I got with Violence Voyager, I was making connections to other films and shows from the off with Burning Buddha Man, not least the visual aesthetic that reminded me of the Guyver anime. There’s an arc in the Gantz manga and anime where the death game shifts to the grounds of a temple, and the protagonists have to do battle with a horde of Buddha statues come to life, and of course the way the statues are stolen in this film, using a transmat beam of some sort, and the body horror implications of that which ensue are reminiscent of The Fly. 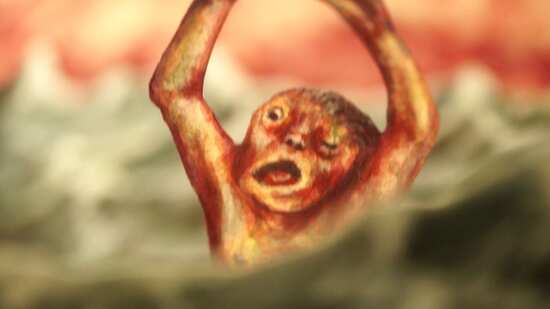 I have to say I wasn’t as enthusiastic about this film. The story is pretty straightforward, you get an idea of what will happen early on, and the film pretty much delivers it without much in the way of subtlety and nuance, and to my shame, I have to admit that I had a hard time keeping my eyes open. But then again, I’m not the target audience, and much as I like anime, and all variations thereof, I am most certainly not a horror fan. This second disc’s AV quality is on a par with that of the first disc, and even a smidge better given that flaw isn’t there. 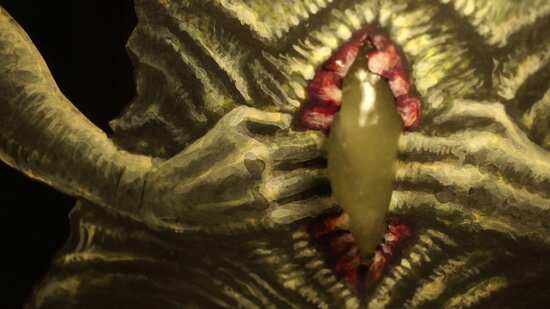 I’m not a horror fan, and I need more from the few such films that I watch than mere horrific imagery and oodles of gore. These two films don’t have much time to explore character or develop plot; they’re as pure exploitation as you can get. Actually they’re even more than pure exploitation as the imagery allows for some visual ideas and character peril that you just couldn’t do in live action and get away with uncensored. For me, the real joy in these films comes on a technical level, as I get to appreciate another form of animation that I hadn’t really seen before, and I get to marvel at the wizardry and creativity that brought it about. The Ujicha films will best be appreciated by horror fans though.