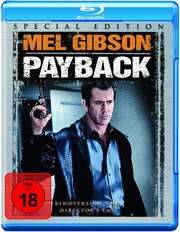 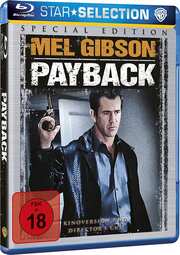 There are two versions of Payback on the DVD copy I’m double-dipping away from, and there are two versions on the Blu-ray as well. Although this time we get the theatrical version and a radically different director’s cut, as opposed to the pan and scan and widescreen versions that were available either side of a DVD 10. It’s that director’s cut that drew me to this Blu-ray. When I reviewed the DVD, I felt that Payback didn’t quite get its tone right, that as a dark, comic action thriller it felt a little cartoonish. Subsequently it became apparent that director Brian Helgeland’s vision of the film was a lot darker and violent, with the humour toned down, and that the studio just wasn’t willing to take a chance on such a nihilistic story, especially given that star Mel Gibson was still Hollywood’s golden boy at the time. He left the film and it fell to another director to complete, requiring the final act to be completely rewritten for one thing. Eventually Helgeland got the chance to finish his version of the film, and that too is presented on this Blu-ray disc. It’s that which I’m looking forward to seeing, although I’ll watch the Theatrical cut as well to refresh my memory, and see if my opinion of that has changed. I imported the German version this time thanks to a sale, although there is a UK release.

Porter is an armed robber, with a curious code of honour all of his own. When his partner Val Resnick comes to him with a scheme to steal from a Chinese syndicate, he seizes the opportunity. But Resnick has plans for that money that doesn’t include Porter, and he enlists Porter’s wife to betray him. Left for dead, Porter swears revenge and after several months of convalescence, he returns for his $70,000. By now, Val has used the money to buy his way into the ‘Outfit’ and is living the easy life of organised crime. Seeing Porter back from the dead is going to give him a bad day, but Porter will get his money back if he has to go through every member of the ‘Outfit’ to get it. It’s harder than it looks though, as in his way are various other street gangs, crooks, bent cops and lowlifes.

Payback gets a 2.35:1 widescreen 1080p transfer, which for the Theatrical Version is the familiar Bleach Bypass version which leans heavily towards the blue end of the palette. As many Warner back catalogue Blu-rays seem to do, it looks as if this version shares a source with the DVD for its transfer. The image is clear and sharp, detail levels are good, and the film looks properly filmic, with a nice level of grain, and even a bit of filmic flicker on occasion. There might be a tinge of black crush in some scenes, but really Payback has scrubbed up pretty well for Blu-ray without going for the full 4k restoration treatment.

The Director’s Cut’s 2.35:1 widescreen 1080p transfer went back to the beginning for its re-edit, getting at the film before it had been through the Bleach Bypass. They opted for a much more neutral colour scheme, de-saturated just a tad, but still rich and colourful. It turns out that Val Resnick had dubious taste in shirts. You will notice blooming whites and some crushed blacks a little more than with the theatrical version, but it is clear, sharp and colourful with excellent detail.

For both versions of Payback, you have the choice between Dolby TrueHD 5.1 Surround English, and Dolby Digital 5.1 Surround German and Spanish, with subtitles in these languages and Danish, Dutch, Finnish, Norwegian, and Swedish. The audio is excellent, once you turn the volume up high enough. The surround is immersive, making the most of the action and the effects, as well as the film’s music without ever sounding obtrusive, while the dialogue remains clear throughout.

You get one disc in a thin BD Amaray eco-case, with holes cut in the plastic.

Insert the disc, and you’ll get a menu screen offering the choice of playing either version of the film. From inside the movie you can access the usual pop-up menu or jump to a main menu screen, where you can switch between versions.

The extras from the DVD, in the form of the Interview Clips with Mel Gibson, Maria Bello, Lucy Liu and James Coburn are present and last 6:38.

There are also new extras to go with the director’s cut release (which initially got a DVD release in the US).

Paybacks Are A Bitch contains the making of documentaries, On Location in Chicago (30:00) and On Set in Los Angeles (19:34).

The Hunter: A Conversation with Author Donald E. Westlake lasts 10:42.

Given the amount of HD content on this disc, it’s unsurprising that the video extras are all in SD.

The Director’s Cut of the film also gets an audio commentary from writer/director Brian Helgeland.

Time has been kind to Payback the Theatrical Version, or at least I’ve mellowed on the whole thing over the years. It no longer feels as uneven or quite as misjudged as it used to. The tonal shifts are still there, but it seems to hang together better as a black, comic thriller. The dry humour may verge on the arid, but it all really works well with the characters. The film no longer feels like a Frankenstein’s monster patchwork of a film, and it’s harder to see the seams where the original material and the reshoots fit together. I’m even more forgiving of the voiceover, as I find its sardonic observations more a counterpoint to the story rather than a straight up narrative. I really enjoyed Payback the Theatrical version in a way that I haven’t before.

I think it’s twenty odd years of watching Hollywood disappear up its own orifice that has made me think more fondly of Payback. When you look at the story, of Porter’s single-minded, thinly focused, and rather un-ambitious need for revenge; he only wants the money owed to him and no more, I can’t help but think of the last, similar revenge movie I watched. That would be John Wick, where the title character racked up a body-count looking to avenge his puppy. I found John Wick a grim, humourless affair, more of a video game than a movie, and I realised that I’d watch Payback with its rich cast of characters and dark humour a dozen times over before I’d watch John Wick again. Payback has style, energy, character and wit, even when it’s neutered to make it more box-office friendly.

The Director’s Cut is a revelation though. The featurette in the extras isn’t understating it with the title, “Same Story – Different Movie”, as it is a completely different experience. The obvious change is the presence of colour in the film, making it a much more immediate and tangible story rather than something approaching a gritty urban fairy tale. The start of the film is also completely changed, with Porter’s introduction wholly ambiguous, with no back-story or context. The first altered scene is a violent confrontation with his wife, and at that point we don’t even have the characters established well enough to realise that Porter is actually the protagonist. The flashback putting this violent, vengeful and brutal man in context actually comes later in the film.

It unfolds in much the same way, as Porter tracks down Val Resnick, the man who double-crossed him and stole his money to buy his way into the Outfit, and he’s willing to go all the way through the Outfit to get his $70,000. But Kris Kristofferson isn’t in this version of the film, replaced instead by the disembodied voice of Sally Kellerman, and the final act is completely different, eschewing the fantastic bait and switch machinations of the theatrical version for something more immediate, brutal, and downbeat.

The Director’s Cut also eliminates that wry narration, and with it tones down the humour in the main character as well, focusing instead on his need for retribution. It makes the few remaining one-liners far more malicious and nasty when they do come. The film also gets a different music score, far more energetic and immediate, really driving the pace of the film and giving it a degree of immersion that the theatrical version didn’t go for. If the theatrical version is a black, comic, urban fairy tale with a healthy dose of nostalgia, then the director’s cut is a more immediate brutal revenge thriller that lives in the now. The thing is that both versions are equally entertaining, and both are worth watching.