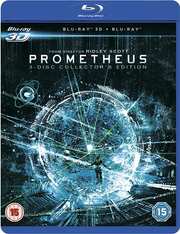 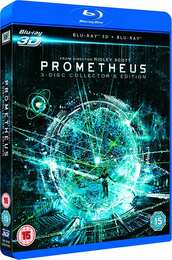 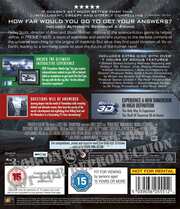 I wasn’t going to buy Prometheus. After all, I had seen it on television, and I knew full well that it was a disappointment compared to the original Alien. Actually I found it to be a disappointment compared to all four of the Alien movies (I haven’t seen the vs. Predator films to comment), but then I walked into a pound store and saw the 3D version on a shelf, with the Blu-ray, and a bonus extras disc. Three discs for a fistful of pennies, I might as well give it a shot, with the hope that the making of the film might turn out to be more entertaining than the film itself. Also, at the time I had a faint hope that the Alien Covenant sequel would fix Prometheus in retrospect. I’ve subsequently seen that on TV while these discs lingered on my to-watch pile, and Alien Covenant is to Prometheus what Alien³ Theatrical Cut was to Aliens. And Prometheus is no Aliens. Anyway, wish me luck...

Incidentally, this is where I would normally point out that Prometheus is a 20th Century Fox release, and since Disney now own Fox, are retiring the brand, and are letting everything with the Fox logo slip out of print, that you should get Prometheus while it’s still out there to get... but consider that caveat issued with the half-hearted enthusiasm it deserves.

In the year 2093, the space ship Prometheus heads to a distant planet with a crew of scientists. They’re pursuing a dream kindled by a series of amazing archaeological discoveries, images of aliens carved into rock and stone, thousands of years ago by ancient and prehistoric humans, seemingly an invitation to a specific location in the galaxy. The crew of the Prometheus hope to find answers to the oldest questions. Just who created humanity, and why? They won’t find the answers they’re looking for on planet LV-223, just an ancient mystery that threatens humanity itself.

For the purposes of this review, I’m sticking with the 2D content.

Prometheus gets a 2.40:1 widescreen 1080p transfer on this disc, with the choice between DTS-HD MA 7.1 Surround English, DD 5.1 Surround English Audio Descriptive, and French, Tamil, Telugu, Hindi, Portuguese, Spanish, Ukrainian, and Urdu, as well as DTS 5.1 Surround Russian, with subtitles in English, Portuguese, Spanish, Danish, Estonian, Finnish, Latvian, Lithuanian, Norwegian, Russian, Swedish, and Ukrainian. There’s nothing to say about the transfer, which is pixel perfect and with bone-crushing audio. Prometheus was made at that point where CGI and live action blends seamlessly with suitable budget, and the disc presents that with exquisite detail and clarity. The audio is immersive and effective, putting us in the alien world, with a grand cinematic score. If there is a nit to pick with the visuals, it might be the make-up for one particular character.

You get 3 discs in a BD Amaray, with two on a centrally hinged panel. There is also a leaflet for the 2nd Screen App.

The 2D movie disc boots to a Weyland themed animated menu. There’s a menu listing promising LIVE EXTRAs, whatever they are.

The Peter Weyland Files offer some in-universe extra content, the way there were commercials and documentaries to accompany Ridley Scott’s The Martian. There are 4 pieces with a total runtime of 18:57, with a young Peter Weyland going all Steve Jobs taking up the bulk of the material.

There are two commentaries to go with the film, one from director/producer Ridley Scott, and one from writer Jon Spaihts, and writer/exec producer Damon Lindelof.

Finally on the movie disc, there is a means to access the Prometheus Mobile App.

In a rather mercenary move, Fox refused to put the extras disc with the 2D Blu-ray version. If you loved the film, and wanted all the extras, you had to buy the 3D release, even if you never put the 3D disc in a player. I suppose it’s karma that most of these 3D releases wound up in pound stores.

You don’t get a lot in the way of menu options on the extras disc, just two categories.

The Furious Gods: Making Prometheus is the full on documentary about the production of the film. In 9 parts it lasts 220:56. That’s 3 hours and 41 minutes or one sixth of a day. There are breakout options to other featurettes, image galleries, screen tests and the like, although you can find these as a Play All option too. These run to an additional 70:54.

There is a whole lot to take in here, and even more than you can probably handle if you actively dislike the film.

Prometheus is awful. Ridley Scott took Alien and remade it, but took all the scares out. Forget for a minute all that fluff about character and narrative, but taken in broad strokes, Prometheus, like Alien, is about a spaceship which goes to a planet for a certain reason, but on that planet finds something completely different, which proceeds to kill off the crew one by one until only one is left alive. There’s an evil android with a hidden agenda, and there’s a one on one battle between the protagonist and a creature in an escape pod just before the film ends.

I should have known something was wrong when I heard Idris Elba’s accent. Then there’s Guy Pearce’s comically bad old age make-up. And the terrible science (and I’m not talking the von Daniken X-Files claptrap that inspires the story), when someone blithely states that 3% carbon dioxide on a planet with 21% oxygen and the rest nitrogen is fatal for humans. It took me just as much time to Google that, as it should have taken your writers to check; far too lazy pre-emptively counting their royalty checks.

What should have made Prometheus different from Alien is the story. Right from the beginning, we have the evocative image of an “Engineer” sacrificing itself to spread its DNA across a planet (presumably a primeval Earth), although chronologically it makes very little sense unless you subscribe to a biblical time-scale for the history of the Earth. Then we have our two scientists, Holloway and Shaw, uncovering proof of humans interacting with these alien engineers from the dawn of human history, and a sign-post inviting them to the stars, to join with the presumed creators.

That is the big assumption in the story, that the Engineers did create humanity, and so this expedition embarks with the hope of meeting their creators and asking all the big questions, about life, the universe, and everything. The one irony is that they’re taking one of their creations along with them, the perfect android David, who has reasons to question his own creators as well, and is finding some of their answers wanting. Quite frankly David is the only good thing in the movie, a stunning creation from Michael Fassbender; although even I had to roll my eyes at the way he plot-holed his way through alien technology. The problem is that all this creationist bumpf is really just the Maguffin to get the ship to the planet of protracted and ugly death, and once they are there, kill them off one by one, in ways that are nowhere near as terrifying or suspenseful as the original Alien.

The ultimate problem is Prometheus is answering questions that really didn’t need answering. Where was that alien ship from in the original film? Where did the aliens come from? What was that giant alien humanoid chest-burst corpse in the alien ship? These things were just background colour to a brilliant horror movie; questions that only the hardest of hardcore Alien fans might have asked, and then only once they’d mined all other facets of the Alien mythology for talking points.

Prometheus gets amazing presentation on Blu-ray and the extra features can’t be faulted. The film on the other hand just isn’t worth it; the script is just too dumb.