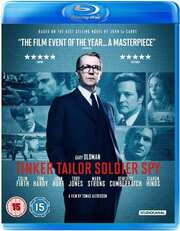 It’s just a coincidence that I’m writing this review a couple of days after John Le Carré died. I’ve actually had this Blu-ray of Tinker Tailor Soldier Spy for quite some time now, ever since I got in the mood for a proper spy movie. I say proper, as spies in modern cinema tend to be flashy, violent and not in the least bit clandestine, in movies like the Bond franchise, the Bourne franchise, Mission Impossible and so on. Spies aren’t earning their crust unless they’re dealing with the fate of the world. This is all probably great for the real spy business, which is probably a whole lot more prosaic, and even mundane, the simple matter of buying and selling secrets. I’ve never read any of John Le Carré’s novels, and neither have I seen the original TV series of Tinker Tailor Soldier Spy with Alec Guinness in the lead role, but I did hear good things about the 2011 feature film. Now I finally get to take a look.

Rumours of a mole in the service warranted a mission to Budapest to facilitate the defection of a top general with information to that end. The mission failed embarrassingly and publicly which led to a change at the top of the service, as well as the retirement of George Smiley.

Months later, it is clear that there is still a problem in the establishment; someone is leaking information to the Soviets. The minister in charge turns to George Smiley, now on the outside to find the mole.

Tinker Tailor Soldier Spy gets a 2.40:1 widescreen 1080p transfer on this disc, with DTS-HD MA 5.1 Surround and PCM 2.0 Stereo English. There is also a PCM 2.0 Stereo English audio descriptive track. There are subtitles should you need them. The image is drab for want of a better word. The film captures 1973 England, and Europe in a way that is completely unglamorous and dispiriting, with a colour palette toned down to just a hair above monochromatic. Detail levels are excellent, there is a filmic level of grain, and the period look is spot on. The audio really works with an evocative music soundtrack, and the surround is immersive, yet subtle and insidious.

You get a disc in a BD Amaray case. After playing trailers for The Awakening, Tyrannosaur, and Carnage, the disc boots to an animated menu.

There are extracts from two John Le Carré audiobooks, The Honourable Schoolboy – Chapter One (54:15), and Smiley’s People – Chapter One (55:32), both read by Michael Jayston.

The Audio Commentary from Director Tomas Alfredson and actor Gary Oldman is hidden away in the audio setup menu.

This is amazing. If films like Bond and Mission Impossible show the world of espionage in a glamorous and pyrotechnic light, then Tinker Tailor Soldier Spy most likely shows the spy business as it actually was, and most likely still is, a boys’ club game of chess, the life and death business of bureaucracy and paper-pushing, thrilling and tense for those involved, but meaningless and mundane to the layman. The TV series Spooks was often lauded for its realism compared to Hollywood glitz, but even that is an exercise in pure fantasy compared to something like this film. But Tinker Tailor Soldier Spy may just be the tensest, most gripping, and exciting spy thriller I have seen.

Much of it is down to realism of course. For one thing, it’s set in the early seventies, before the era of the Internet and the Smartphone, when technology was delightfully kludgy and archaic and utterly limited in what it could do. This is the espionage of paperwork, of ledgers and diaries, far more tactile and visceral than the eye candy of computers with holographic displays. Things also take time, which adds to the tension; as does the idea of sneaking into an archive and rifling through a filing cabinet instead of hacking into a computer from the other side of the world.

The realism is more meaningful in that this is inspired by a true event. The early part of the Cold War was when the British intelligence services were indeed compromised, the era of Kim Philby and the like, traitors selling secrets across the Iron Curtain. It was remarkably embarrassing and it made headlines. You get the feeling with Tinker Tailor Soldier Spy that merely the names have been changed.

It all works because the film is an acting masterclass, a film top-loaded with British acting talent, led by a superlative performance from Gary Oldman as George Smiley. Let’s face it; spycraft is all about lying, pretence, about hiding one’s true intention behind a veil of normality. You have all of these characters going about their daily business, interacting in the mundanity of an office setting. Yet they all have hidden agenda, there are layers and layers of meaning beneath their placid surfaces, and while some may talk much and say little, others like Smiley say little and mean even less. To get gripping performances from that kind of character takes amazing skill, and in Tinker Tailor, not only do you hang on every word, you seek meaning in every glance, every turn of the lip. You can’t miss a single frame of the film, and when you put the effort in, it is utterly rewarding.

The film is also subtle about the way it builds its story. It’s presented as flashback intermingled with current events, and seemingly meaningless observations, little glimpses at the edge of the frame continually pay off as the story is revealed. Something as simple as a pair of shoes is a significant plot device that lifts another veil obscuring this gem of a story. You have to work at it, but every time you penetrate a little further into the plot, you get a rewarding thrill of discovery.

The look of the film is grim and bleak, the characters are in no way redeemable, not even the protagonists, and there is a cynical and nasty edge to the story that may leave a sour aftertaste if you’re looking for a simple good guys versus bad guys game of Hollywood spy-hunting. Tinker Tailor Soldier Spy is the best spy movie I have seen; more thrilling than any Bond.