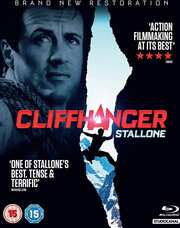 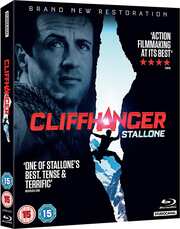 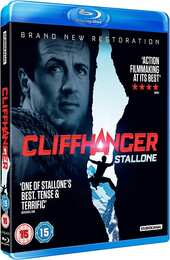 This was a day one purchase for me... and it’s been sitting on my to-watch pile ever since. Right now it can be had for £10, which makes my shelling out £15 for a movie that I didn’t watch for 2 years pretty dumb. Welcome to the world of the home cinema collector. Actually my procrastination turned out to be a good thing in one respect, as Cliffhanger was one DVD I had earmarked for an HD double-dip from the day I bought an HD TV, and by the time I actually got around to it, Studiocanal had gone and re-mastered the film in 4k for a UHD release, and they gave it an updated Blu-ray to go along with that. This should look as good as Cliffhanger can on Blu-ray. And this time, the film is uncut.

Gabe Walker is a mountain rescue man with a traumatic past. He is haunted by his failure to rescue his friend Hal’s girlfriend from peril. Her death has forced him to leave his job and his girl, Jessie behind. He has returned to the Rockies in a last effort to convince her to go to the city with him, when an emergency arises and Jessie convinces him to help Hal to rescue the five stranded climbers from atop a mountain. However, Hal is less than enthusiastic to accept the help of a man who he still blames for his friend’s death. These are mundane matters though, for the people who called for assistance, far from needing rescuing, are actually thieves and survivors of a spectacular mid-air heist gone wrong. Their plane has crashed and their loot has been lost in the mountains. When the rescue party arrives, armed criminals confront them. They are forced at gunpoint to follow a tracking device to retrieve the thieves’ missing millions.

Cliffhanger gets a 2.35:1 widescreen 1080p transfer with the choice between DTS-HD MA 5.1 Surround English, German and French with subtitles in these languages. It’s an excellent presentation which really shines on this disc. Cliffhanger is all about the scenery, the mountain landscapes, the aerial stunts and the great action, and it all looks stupendous on this Blu-ray. This film was made in 1993, and while CGI did exist back then, it wasn’t this good. Cliffhanger was made the old fashioned way. The audio too is immersive and effective, really placing you in the middle of the action. The image is clear and sharp, contrast is excellent with great dark detail and the film retains a useful level of grain. Detail is astounding and the white against white snow-scapes are ideal for checking your TV screen for dead pixels. The dialogue is clear, although there are a couple of scenes where sync seems to drift.

You get 1 disc in a BD Amaray case, with an o-card slipcover. You have the choice of English, French, and German animated menus.

There are two looks at Special Effects in
Sarah’s Fall (4:39)
The Helicopter Explosion (2:45)

There are 12:01 of Storyboard Comparisons.
The Trailer with Introduction from Renny Harlin lasts 3:26.

It’s clear that Cliffhanger hasn’t seen any love with regards to bonus features since the special edition DVD in 2003. These features are all recycled from that disc and are in SD format. It would have been nice to have seen something a little more retrospective.

I haven’t enjoyed Cliffhanger this much since the day I first saw it back in the cinema in 1993. It is 2020 after all, that would make 90s nostalgia the big thing for the coming decade. When last I watched Cliffhanger on DVD, it felt a little tacky and dated, Die Hard up a mountain for want of a better descriptor, and some of the action movie clichés of the period really stood out for me. But last night, this was edge of the seat stuff again, giving my heart a workout at all those close shaves, and cliff-edge action sequences. Renny Harlin was still trying to sell it as actors up a mountain in the audio commentary, when we all know that no insurance company would allow that for anyone other than Tom Cruise, and the 4k re-mastering is good enough for you to see the seams between effects and studio work, and location and stuntmen. But it’s still easy to suspend one’s disbelief and tensely gnaw fingernails to the quick for the better part of two hours.

The opening of the film sets the stakes from the off, with some breathtaking cinematography indicating the high bar in terms of visuals and stunt work this film will work with, as well as just how thin the line between life and death is for people who like to climb mountains for fun, before getting to the real life and death stuff later on. The opening also sets the trauma that drives the main protagonists in the film, something they will have to work through as the plot unfolds.

Then you have the driving force of the plot, again a stunning sequence regarding a mid-air heist, which again effectively introduces the cruel, callous, and delightfully scenery chewing villain of the piece as memorably played by John Lithgow, as well as his gang of mercenary henchmen, all of them evil to such a degree that you know that they will suffer inventive and satisfying exits as the film unfolds.

That’s even before we get to the meat of the film, where our heroes have to play cat and mouse with the bad guys, as they race to recover their ill-gotten booty, scattered across the face of a mountain. I don’t know why I fell out of love with Cliffhanger in the first place, but this 4k restoration of the film, even on lowly Blu-ray was enough to rekindle my passion for it. The extras are admittedly rather weak on this disc, but I can’t fault the AV presentation. It’s well worth seeking out if you’re feeling nostalgic for the nineties.