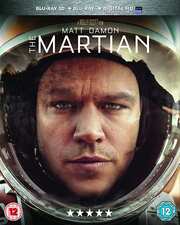 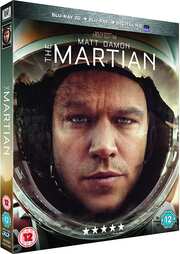 Review for The Martian 3D

This is one of those Twentieth Century Fox titles, now no doubt in the hand of Disney who for reasons of their own are letting that back catalogue slip out of print. Normally at this point, I’d be telling you to get it while you still can, if you want it on disc, except that The Martian is one of those titles which in recent years have been on some TV channel or other most weeks. It’s not exactly hard to watch, even if you don’t subscribe to online streaming. It’s actually all those TV broadcasts that convinced me to pick up a copy the next time I saw it in a pound store.

I never intended to watch The Martian. I haven’t had a lot of luck with movies set on the fourth rock out from the sun, with Mission to Mars about the best I had seen in recent years, and that isn’t saying much, a bit of 2001-esque sci-fi that had more than its fair share of dumb moments. Then there was the Red Planet, which made Mission to Mars look like a work of genius, and the less said about Stranded, the better. The Martian also came out at the time when people were wondering if Ridley Scott’s star had waned after Prometheus, and the premise was so close to the sixties pulp sci-fi Robinson Crusoe on Mars that I just didn’t expect good things from The Martian. But over the years, I’ve found that if I was channel hopping, and The Martian was on, I would stop my wanderings through the listings and watch the film through to the end. I have now seen The Martian six or seven times on TV, or at least all but the first twenty minutes. If it’s that much of a hook, then surely it’s worth getting on Blu-ray. And this time, I’ll get to see how the film starts!

Once again, I got a 3D version of a film because it was cheaper than the stand-alone 2D release, yet has the 2D disc anyway.

The Ares III mission to Mars comes to a premature end, when a storm forces the expedition to abort and return to Earth. But in the violent storm, botanist Mark Watney is struck by a piece of equipment and lost, presumed dead. Only he survives the storm, and wakes up to find his crewmates gone, and that he’s alone on Mars.

Now he has to figure out how to survive alone with just the contents of the base to support him. Given that the equipment was destroyed in the storm, he needs to find a way to communicate with Earth; and if all that works, he’ll need to find a way to stretch his rations long enough for a rescue mission. On Earth, NASA’s facing a PR nightmare and a logistical minefield when it transpires that they left one of their own for dead, alone on Mars.

The Martian gets a 2.40:1 widescreen 1080p transfer on this disc, and you have the choice between DTS-HD MA 7.1 Surround English, Dolby Digital 5.1 Surround English audio descriptive, Spanish, French, and Portuguese, with subtitles in these languages and Japanese. It’s an excellent transfer, clear and sharp, with gorgeous colours and exquisite detail, with no flaws whatsoever to my eyes. The audio too is effective and immersive without ever becoming overblown, keeping the dialogue clear throughout, and the disco soundtrack adds to the humour of the piece. The effects really are seamless, good enough that any future actual Mars mission might just wind up Capricorn One’d.

You get two discs 3D and 2D on each inner face of a BD Amaray. Inside the case you’ll also find a UV code and an advert for potatoes. The disc boots swiftly to an animated menu.

If you want the full suite of extras, best go looking for the extended Blu-ray which has a commentary, a feature length making of, and several more featurettes besides.

This version on the other hand is frugal with the extra features with only three related to the making of.

The other extras offer more of the cast in character, with faux documentaries (with an aged up Neil deGrasse Tyson), fly on the wall pieces, and even faux promotional material, from companies sponsoring the Mars mission.

There is also a Theatrical Trailer and three Production Art Galleries. 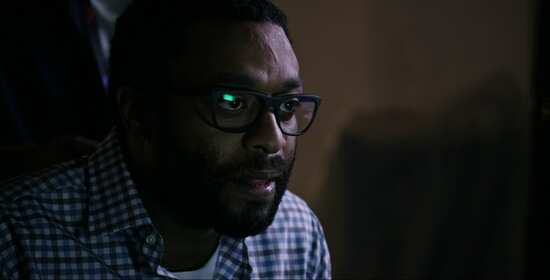 I recently mentioned how filmgoers love seeing characters facing adversity and overcoming extreme odds, and with Gravity, which I was reviewing at the time, I said that you couldn’t get more adverse or odds more extreme than someone being stranded in space. The Martian makes two for that particular genre, with Mark Watney stuck alone on another world, 140 million miles from any sort of help. That he’s on the surface of a planet, with some scant resources at his disposal and the luxury of time makes his predicament somewhat less immediate than that faced by Ryan Stone in low earth orbit, but the stakes are just as high, the penalty for mistakes just as terminal. If Gravity is more like Open Water, The Martian is more like Flight of the Phoenix, which goes some way to explain why this film impresses me more, and keeps on tempting me to watch whenever it’s on TV.

It’s not perfect by any means. There are questions that need answering which are just brushed over in the film, beginning with just how powerful can a storm on Mars be for it to cause as much damage as it does in this film, in an atmosphere which is just 1% of the density of that on Earth? Then there are the questions regarding orbital rendezvous during gravitational slingshot manoeuvres, leisurely and choreographed over Earth, frantic and edge of the seat stuff over Mars. Fortunately the film is more than good enough in terms of character and story for these head scratchers to be rendered moot, whereas I’m still bugged by the convenient space walk distance orbits in Gravity.

The Martian works because of its characters, particularly that of Mark Watney; played by Matt Damon who has to carry the movie for the most part, given that he is alone on another planet, with only a mission log recorder to talk to. Fortunately Watney is a witty guy with a good sense of humour, and ‘the right stuff’. It’s the ability to set aside fear and concentrate on the problem at hand that has typified test pilots and astronauts alike since the year dot, and Watney has to face a series of challenges that tax his ingenuity and inventiveness, just to stay alive, whether it’s food, water, transport, or communication.

At the same time, we have the situation play out on Earth, echoing the structure of Apollo 13, where there were 3 astronauts trying to stay alive long enough to return to Earth, and scientists and engineers back on Earth, figuring out the problems and solutions to make it possible (hey, that’s three space survival movies; this genre is expanding). There are also Watney’s crewmates who are returning home from Mars while all this happens. NASA has to deal with the fact that they’ve left one of their own behind, the PR disaster that ensues, keeping all this from the Ares crew so they stay focused on the task at hand, and trying to find a way to rescue Watney as well. Here is the human drama and social politics that drive the movie, while what happens on Mars is a more focused fight for survival. It makes for a great balance, and keeps the film fresh and the pace lively.

The Martian is a great film, which given how ready I remain to re-watch it, whether on TV or on disc (I actually watched it twice on TV while this disc was sitting in my to-watch pile!), means that I really can’t fault this film, even with the nits I have to pick. It’s just brilliant, compelling human drama which evokes the best of us, the aspects of humanity that aspire to the stars. If you want the real meat behind the making of the film, then seek out the Extended Version, but if the film is all you need, then this release will do just fine, with its excellent technical presentation.