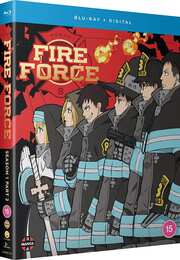 With all of the delays and push-backs, it’s been a long while waiting for part 2 of Fire Force. It’s actually been longer than I thought, as I reviewed Part 1 back when I was still being snowed under by review discs, pre-lockdown when everyone was still sending them out. I was going hell for leather on reviews, with four titles on the go at any one time, and even then I couldn’t get to Fire Force Season 1 Part 1 until two months after its March release date. People who got it then have had to wait eight months for part 2, for me it’s only been six. Only... Six months is more than enough time for me to not only forget the story, but the characters as well. Basically, as I start watching Part 2 for review, all I can tell you is that it’s a show about fire. This isn’t a good thing as Part 1 ended on a cliff-hanger. Being back at square one with this series would be ahead of where I am now. Hopefully it won’t be too long into this batch of episodes before my memory is jogged. 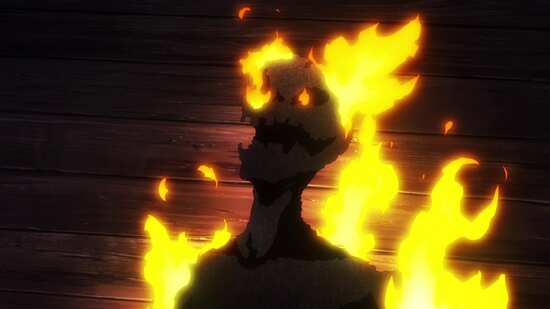 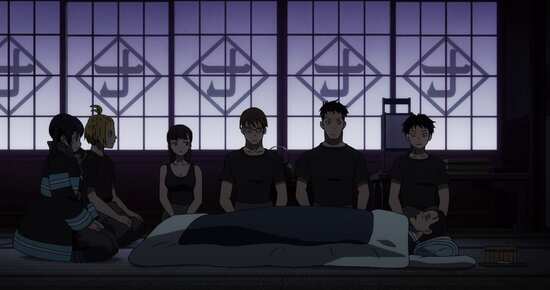 However, this spontaneous human combustion may not be truly spontaneous. There are 8 Fire Companies set up to investigate the source of this phenomenon and put an end to it, but they tend to work in secrecy and often at cross purposes. The newest Company 8 has been set up to see if one or more of the companies knows more than its telling, whether there is actually a conspiracy behind the appearance of the Infernals. This suits Shinra, as he also wants to know the truth behind his tragic past, a fire that claimed the life of his mother and his baby brother. 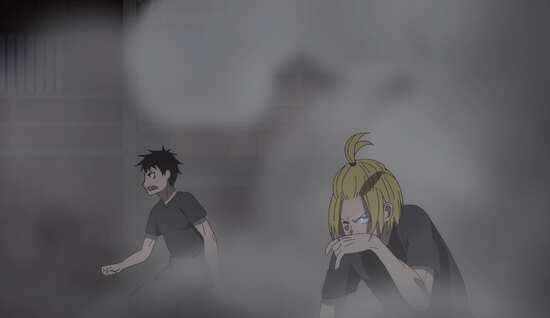 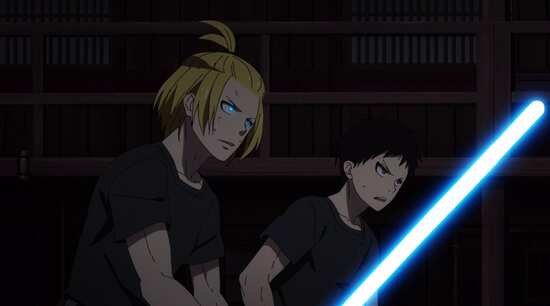 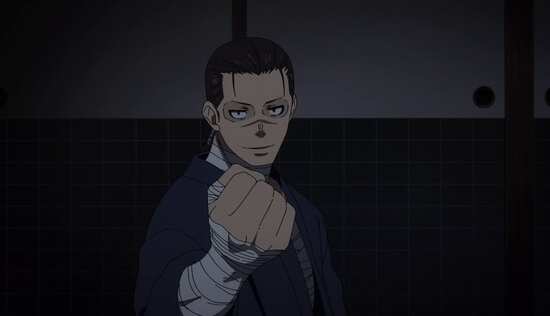 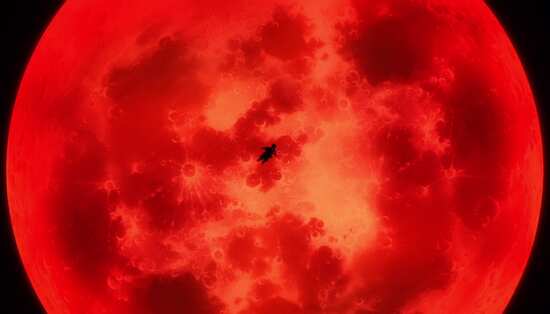 You get two discs on each inner face of a BD Amaray. There is some nice sleeve art inside to look at, while the outer art is replicated on an o-card slipcover. You get a digital copy with the release, and the discs present their content with animated menus.

Disc 2 has the following extras. 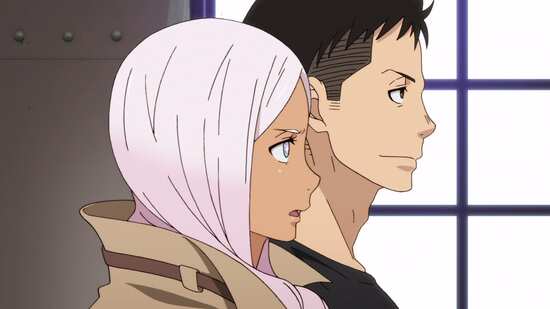 There are also the textless credits. 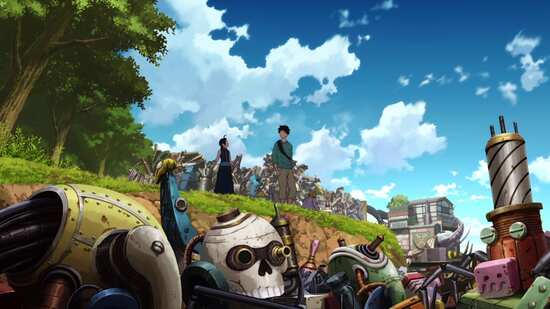 I wish I had found the time to watch Part 1 again, because quite frankly I was lost with Part 2, especially at the beginning which resolved a cliff-hanger from Part 1. I spent most of the time trying to remember who was who in this story, and while the members of the 8th Company eventually came to mind, as well as the new recruits that join in this collection of episodes, most of the ancillary characters introduced and set up in the first half remained vague ciphers to me. Once the story gets going again in this collection, with the tale of one of those new recruits, a blacksmith and tinkerer named Vulcan, it’s easier to get back into the story, and Fire Force still develops as a brilliantly animated but long running shonen action show. It’s throwing out plot, laying groundwork, delivering on action, all with Atsushi Ohkubo’s unique style and wacky comedy, and it’s a very solid, engaging and entertaining show. 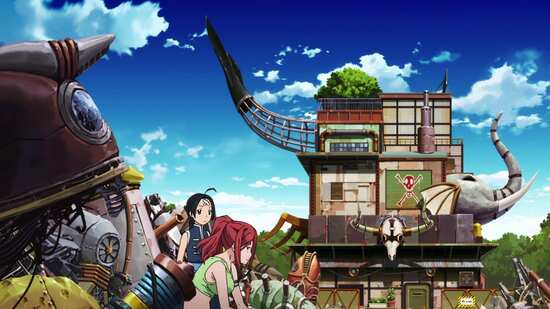 There are big developments in Shinra Kusakabe’s story; when we met him he was a damaged kid, looking for revenge against the Infernal that had destroyed his family, leaving him an orphan. Part 1 hinted that some of his memories weren’t accurate, especially when it came to what had happened to his baby brother. The Vulcan storyline ends in a development that confirms it. Not only is Sho Kusakabe still alive; he’s a big part of the villain’s plan, and he’s not inclined to greet his big brother with a hug. In fact it turns out that nothing that happened 12 years previously, is as Shinra remembers it, and developments towards the end of this collection, as the 8th venture underground into the Nether to face off against the enemy, and ostensibly rescue Shinra’s brother set the story in a completely different direction. At this point in the story, Fire Force is doing a stellar job of world building (which would have been even more effective with me if I’d remembered what it had done previously in Part 1). 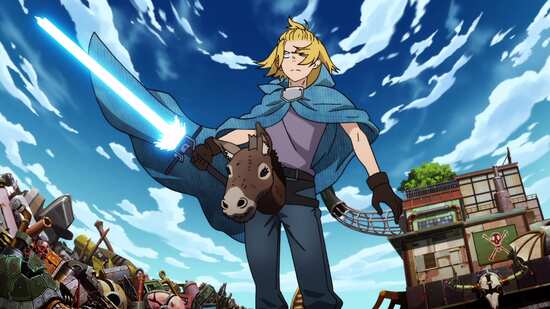 I can’t help comparing Fire Force at this point to Atsushi Ohkubo’s other famous series, Soul Eater, which I happen to be revisiting right now, and in one very important respect, Fire Force just isn’t as good. Soul Eater by the end of its first half had really developed its cast. From the beginning it gave you seven characters to invest in, three partnerships, and the people around them, and it kept on adding more and more colourful characters to the mix, both protagonists and antagonists that stayed in the mind, and went through distinct story arcs. Fire Force on the other hand, despite its more fiery tone, plays a lot more for laughs, and so it really feels like Shinra Kusakabe’s story, while everyone else around him and in the show, even his teammates at the 8th, are just comic relief. There’s a hint of moving away from that with the Vulcan storyline, and especially with Shinra’s encounter with his brother Sho and the revelations that ensue, but I’m not buying into the story in the same way that I did with Soul Eater. 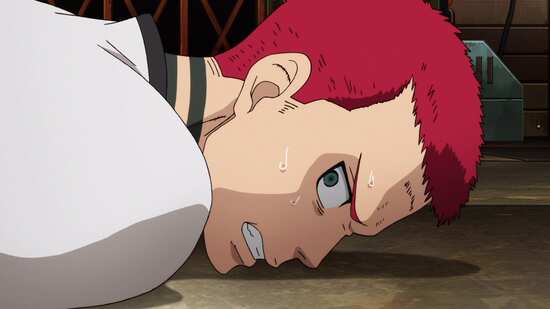 Actually, there’s another issue too, that of the traditional shonen trope of levelling up during battles. Shinra’s power is to fly on the pyrokinetic fire generated by his feet, and he’s been training that skill up. There’s a whole lot of exposition and jargon that unfolds in this half, which has me at a loss to be frank, especially as I can’t recall it being mentioned in the first half. Shinra’s first face-off with Sho reveals his weaknesses, and he goes for some more training, and in the re-match gets to use his new abilities. So far, so shonen; but at this point, so early on in the story, Ohkubo’s already pushing it beyond credulity, having both characters breaking the laws of physics. It took Goku several hundred episodes to achieve the same level of universe shattering power in the Dragon Ball saga, and Shinra and Sho are doing the same in less than two dozen episodes of Fire Force. That obviously raises the question of where they can push it from there. 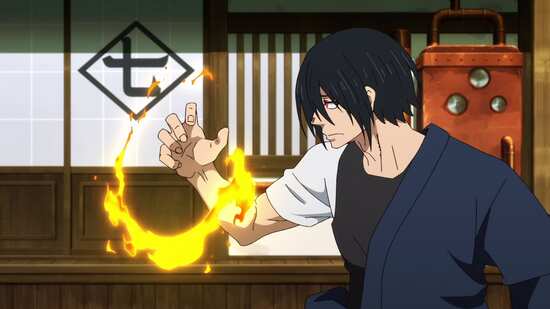 Fire Force is watchable anime, but it’s just not compelling television at this point, certainly not in the way Soul Eater was. These long running stories have a tendency to develop slowly though, and who knows, the second season might develop the characters in a more interesting way, or maybe I’ll watch this collection again in conjunction with Part 1 and have less of the ‘fish out of water’ feeling that I had this time and have a better appreciation for this collection of episodes. I’m still looking forward to the second season, currently airing and streaming, to get a home video release, so this collection obviously wasn’t that bad.