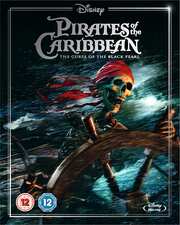 Pirates of the Caribbean: The Curse of the Black Pearl (Blu-ray Details) 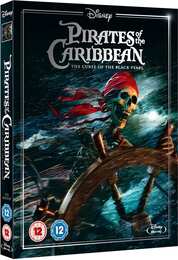 DVD
Gone in Sixty Seconds (US)

Review for Pirates of the Caribbean: The Curse of the Black Pearl

I absolutely adored Pirates of the Caribbean: The Curse of the Black Pearl when I saw it in the cinema back in 2003, and loved it just as much on DVD. Given that adoration, you’d expect it to be top of the list when it came to double-dipping to Blu-ray, but surprisingly, I’ve left it this long before getting it in high definition. I know that it has had its fair share and more of lacklustre sequels, although I had no idea we’d reached five Pirates movies at the time of counting. I suppose with Johnny Depp ‘cancelled’ again, we might get a break from any more, but none of the sequels ever dampened my passion for the first movie, mostly because I never actually watched them. I am a little curious about my reluctance to get this Blu-ray, and when I think about it, I haven’t actually re-watched the DVD in almost ten years now. 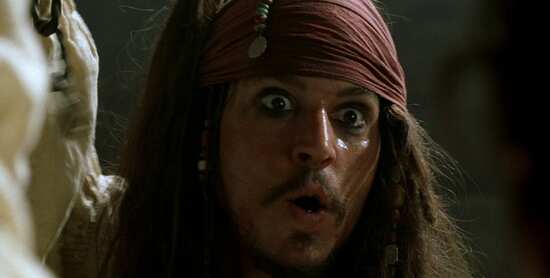 The ship carrying the Governor of Port Royal and his daughter Elizabeth Swann comes across the aftermath of a pirate attack. They manage to pull one survivor from the wreckage, a young boy called Will Turner. When Elizabeth spies a piece of pirate gold around the boy’s neck, she takes it fearing that he will be condemned as a pirate. Eight years later, and Elizabeth still has the medallion. She has blossomed into a young lady of an age to wed. Meanwhile Will Turner is a skilled apprentice sword smith, catering to the higher echelons of Port Royal society.

That piece of gold is cursed though and calls to its victims, the pirate crew of the infamous Black Pearl. They attack Port Royal, pillaging the town and they kidnap Elizabeth Swann for the piece of Aztec Gold around her neck. Will Turner is desperate to save her, but the only way to find the Black Pearl is with the aid of infamous pirate Jack Sparrow, currently languishing in the Port Royal prison, destined to hang for his crimes. Upstanding Will Turner will have to turn pirate himself, beginning with a jailbreak. Meanwhile Elizabeth learns firsthand of the Curse of The Black Pearl from its Captain Barbossa. All those who stole an ancient Aztec treasure are condemned to a half-life, their true ghoulish natures revealed in the light of the full moon.

The first Pirates movie gets a 2.35:1 widescreen 1080p transfer with PCM 5.1 Surround English, and Dolby Digital 5.1 Surround English, Spanish and French, and there is a DTS 5.1 Spanish track as well. There are subtitles in these languages and Norwegian, Swedish, Danish, Dutch, Finnish, and Icelandic. It’s an excellent transfer, clear and sharp, with good colours and excellent detail. The film grain is present but light, and there are no problems with compression or banding even given the film’s plentiful smoky, dark, and misty scenes. The audio volume level may be a tad low, but the uncompressed English track is immersive, resonant and effective in bringing the film’s action and music across. Surprisingly, the effects still hold up well today, which given the serious CGI used to bring Barbossa’s undead crew to unlife is really impressive. Most 17 year old CGI looks obvious and fake, but not in Pirates of the Caribbean.

You get two discs on each inner face of a BD Amaray. It’s wrapped in one of Disney’s patented double-dip o-card slipcovers, bells to collector’s Pavlovian instincts. It’s plastered with a sticker advertising as such, which will probably rip the cover when you try to peel it off, forcing you to buy another copy. Disney recently did this with the Star Wars saga, offering a whole new couple hundred quid worth of collectible sleeves. As for the discs, they are the same as they’ve been for the last thirteen years!

The movie disc autoplays with trailers for Disney Blu-ray and Pirates of the Caribbean: At World’s End before booting to an animated menu with long, tiresome animated transitions.

Incidentally if you liked the four audio commentaries on the DVD, better hold onto it, as they’ve been stripped from the Blu-ray.

In its place is the Scoundrels of the Sea pop-up Trivia track which offers break-outs to some video clips presented in 1080i.

The Movie Showcase offers 3 clips from the film which emphasise the Blu-ray’s Blu-ray-ness. You can tell this is an early release.

The rest of the extras are on Disc 2, and will be familiar if you’ve got the DVD especially as they are in SD.

I now understand my reluctance. Pirates of the Caribbean: The Curse of the Black Pearl just hasn’t aged well. Or you could say that I have aged. Back in 2003, I wanted a theme park attraction for a movie, a two hour plus thrill ride, and it was a bonus to get something approaching a story, and some vivid characters. Some vivid characters are no longer enough. Today, I see Pirates of the Caribbean as a film with a whole lot of action and excitement, plenty of memorable moments, and it is still fun to watch for the most part, but I find that I want a movie, not a thrill ride, and it’s not really a movie.

The story works, but it’s really linear, and worse, it’s padded. There’s no reason as to why the film runs to 2 hours and 20 minutes. It could tell its story in 40 minutes less. I think it’s the fact that we visit Isla Muerta twice, and for the same reason that really drags the pace down for me. When the big sea battle takes place at the end of the second act, I can feel my attention drifting and my eyelids drooping. The Curse of the Black Pearl is now a film I’d much rather watch in instalments; it feels more like a TV mini-series in structure. Not that the story warrants it with its lack of complexity.

It’s also overly reliant on its two leads. Johnny Depp’s Jack Sparrow is iconic in this film, even if the character became tiresome having to carry the sequels, and Geoffrey Rush still matches him as Barbossa. But these two larger than life characters alone fill the screen. In one of the extras you can hear the producers talking about bringing back character actors to enrich the cast, as in the golden age of Hollywood, but now I just see a supporting cast of blandness, tepid performances that just don’t live up to the leads; especially the colourless Orlando Bloom and Keira Knightley, bearing the burden of the romantic plot in the film, and really crumbling under the pressure. I may have had a different perception of the cast when I reviewed the DVD, enthralled by the theme park attraction brought to life, but now I see the waxwork animatronics going through the motions.

Pirates of the Caribbean: The Curse of the Black Pearl is still a lot of fun to watch; don’t get me wrong. The Blu-ray too is surprisingly good quality for a disc from early in the format’s lifecycle, even if the extras have just been ported over from the DVD. But it’s not the instant classic that some might have considered it to be back in 2003. Some might say that it single-handedly reinvigorated the swashbuckling pirate adventure movie, but given that genre is limited to the sequels, that isn’t saying much. I certainly didn’t think it at the time, but today it boggles the mind that this film spun-off four sequels. It just isn’t that good.