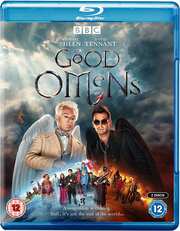 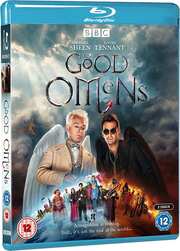 It was a fortuitous coincidence. I don’t use Amazon Prime out of general principle. Companies should give good service full stop, not charge extra and call it a privilege, no matter how many bonus features they throw in. They take away free shipping for all, then continually raise the cost of shipping, and the threshold for free shipping, and I refuse to cave. They paste free trial buttons for Amazon Prime all over their pages and I refuse to cave, instead shifting more and more of my custom to vendors on Amazon Marketplace or just other e-tailers completely. Then one day last year, hastily placing an order online, I accidentally clicked a Free Trial button, and wound up with a month of free Prime to use, and nothing to use it on. But that was a few days before Amazon started streaming their big co-production with the BBC, the adaptation of Good Omens by Neil Gaiman and Terry Pratchett, starring David Tennant and Michael Sheen. Those were six good days, good enough for me to place an order for the eventual Blu-ray release.

Crowley the demon, and Aziraphale the angel were there at the beginning, and it looks like they’ll be there at the end too. But neither are exemplars of their particular faction. Crowley was the one that tempted Eve with the apple, but he had to question the idea of planting an apple tree in the middle of the Garden of Eden, and when Aziraphale saw the dangers facing Adam and Eve once expelled from the garden, conveniently lost his flaming sword where Adam could easily find it.

In the thousands of years since then, both have become accustomed to the human pleasures of life on Earth, even as they acted to advance the causes of Heaven and Hell, and they somehow managed to maintain a clandestine acquaintance along the way. But eleven years previously, it all changed, the endgame began, as the son of Satan, the antichrist was born, and it fell to Crowley to ensure the child was placed with an influential family. Seeing the prospect of Armageddon as something to be avoided, Crowley and Aziraphale agreed to influence the child as he grew towards a path that didn’t end the world. Only there was a mix-up at the hospital, and instead of being raised to power, the Antichrist, Adam grew up in a rural village, the son of a quiet, middle class English family. And now that he has turned eleven and come into his power, only six days remain until Armageddon!

The six episodes of Good Omens are presented across two Blu-rays from the BBC.

Disc 1
1. In the Beginning
In which the Antichrist comes into his power; optional commentary from writer Neil Gaiman and director Douglas MacKinnon.

2. The Book
In which the descendant of a witch, and the descendant of the witchfinder general, set forth on their paths to find the Antichrist and each other; optional commentary from composer David Arnold and first assistant director Francesco Reidy.

6. The Very Last Day of the Rest of Their Lives
In which Crowley and Aziraphale stand trial for their part in the end of the world; optional commentary from Neil Gaiman and Douglas MacKinnon.

Good Omens gets a 2.35:1 widescreen 1080i 50Hz transfer on these discs, as you would expect from a UK TV programme. Well, maybe the frame rate, but the aspect ratio does make you want to watch the show in a cinema rather than on TV. It certainly looks good, with the combined BBC/Amazon resources going into a show that looks suitably cinematic and with excellent production values that do justice to the story. The CGI is excellent, the set designs and costume designs really sell the story, and you’ll never want the opening credits to end. About the only niggle might be some banding visible during scene fades.

You have the choice between DTS-HD MA 5.1 Surround English and 2.0 Stereo English Audio Descriptive with optional English subtitles. The subtitles are nicely placed on the black bar at the bottom of the screen, avoiding impinging on the image. The dialogue is clear throughout, the surround works well for what is a high end television production, and the music drives the story perfectly without overpowering it. There is some serious Queen at work here which is always a good thing.

You get two discs on each inner face of a BD Amaray. For once I can see the point of an o-card slipcover when the postie drops the package awkwardly and one of the plastic catches snaps on the Amaray. The version I got also has four art cards slipped in the case. The inner sleeve lists the commentaries with the episodes, as they aren’t on the menus.

Place them in the player, and you get a verbal indication that if you press Enter on your remote with alacrity, the discs will boot to menus with audio description, which is a fantastic idea. Leave the remote and the usual animated menus will load.

Each episode has a commentary with it as listed above.

Disc 1 has the following extras.

Disc 2 has the following extras.

They sure look like a big chunk of extras, but they are quite disappointing in their brevity, while of the commentaries, only those from Neil Gaiman and Douglas MacKinnon held my attention.

Religious satire is a perilous path to entertainment. That way lies pickets and protests, fatwas and death threats. Just ask Monty Python, Kevin Smith or Salman Rushdie. Yet Good Omens, despite its pointed observations on religious dogma managed to get by with comparatively little controversy. I wish I could say that it was because mankind as a species has become more enlightened and accepting in the last few decades, but current events tend to suggest the reverse. It’s more that Good Omens comes from a warm and gentle place, espousing a love for humanity that by far outweighs any criticism it may have for religious institutions. That the book was written by national treasures Terry Pratchett and Neil Gaiman also offers a degree of immunity from the lunatic fringe. I am a big fan of Discworld, and it’s fair to say that I absolutely adore Good Omens.

It’s because above all, it’s a love story, a romance between an angel and a demon, Aziraphale and Crowley. They were there at the beginning, crossed paths through all six thousand years of history, and now look as if they’ll be there at the end as well. Both noticed a degree of hypocrisy right from the start, when the apple tree that tempted Eve was planted in the middle of the Garden of Eden; and they kept noticing similar oddities through the years. Along the way they sort of fell in love with the human world, marvelling at what these little creatures got up to, and what they created, whether it was fashion, food, or fast cars. They also noticed that the forces of heaven and hell tended to balance each other out, and that if they worked together clandestinely, they could impress their superiors on either side without actually having to do much work.

It’s a nice arrangement, but it all looks as if it will go to pot, when the Antichrist is born, and Armageddon is set into motion, when the world will be destroyed, and heaven and hell can have their big, final war to see which side comes out on top. Crowley and Aziraphale would much rather keep the world as is, thank you very much, so they embark on the dangerous path of derailing Armageddon, nudging destiny here and there as the world counts down the final few years. Although they kind of cock it up at the first hurdle when Crowley mislays the Antichrist.

He’s supposed to be a boy named Warlock, son of the US Ambassador, poised next to the heart of power to provoke the end of the world when he comes of age and into his power. Crowley and Aziraphale try their best to give him a balanced upbringing, making sure he has the same free will that the rest of humanity has. But in reality, a mix up at the hospital means that the Antichrist has grown up in an idyllic English village as Adam Young, beloved of his parents, and at the heart of a group of friends that love having adventures in the countryside. And as his eleventh birthday approaches, strange things start happening, although no one knows why.

No one that is except for the witch Agnes Nutter, who hundreds of years previously wrote her Nice and Accurate Prophecies, before dying (as she expected) at the hands of a witchfinder named Adultery Pulsifer. Now, Agnes’ descendant, Anathema Device is a young witch upon whom destiny has delivered the duty of following Agnes’ prophecies, finding the Antichrist, and preventing Armageddon. At the same time, one Newton Pulsifer, failed computer engineer, has discovered what remains of the Witchfinder Army, and quite possibly a new vocation.

On top of that you have the Archangel Gabriel and his angels keeping an eye on Aziraphale and preparing for Armageddon with an eager zeal, while on the other side, the demon Beelzebub and her minions are doing what they can to ensure Crowley follows the script. On top of all that, the four horseman of the apocalypse have been summoned.

There’s a lot going on here to keep a handle on, plenty of plot threads and story arcs, and the scripts are rich with humour, and Terry Pratchett’s trademark footnotes, as narrated by God. It’s a quintessentially English story, but given the cinematic aspect ratio and excellent production values it takes on an epic feel worthy of its scope. And at the heart of it all is the delightful friendship between Aziraphale and Crowley. Michael Sheen’s Aziraphale is a little bit prissy, a bit of a dandy, but morally upright and with a strength to him that is rarely revealed. David Tennant on the other hand now occupies the dictionary definition of ‘louche’ as Crowley, a demon with swagger and style who lounges his way through existence. Together they have such great chemistry that they almost outweigh the import of the story.

It’s also telling the calibre of the cast that Good Omens gets, with notable names and faces showing up for even the minor characters or simple cameos. There is a distinct love for the material that comes across in the show. The quality of the show on Blu-ray is a big step up over Amazon’s streams and even the BBC broadcast. The extras are a little underwhelming, but that shouldn’t stop you from getting this Blu-ray.