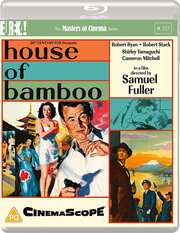 Synopsis:
"What about Japan? " asked Zanuck. "Would you like to shoot a picture there? " "Holy mackerel, Darryl, now you're talking! " When offered the opportunity to film an entire movie in Japan, (Fox would be the first major American studio to do so) Samuel Fuller jumped at the opportunity and the result is House of Bamboo, a lushly photographed, cold-as-ice film noir like no other.

Japan, 1954. A military train is robbed of its cargo by a ruthless gang of professionals led by the sadistic, but brilliant, Sandy Dawson (the incomparable Robert Ryan). Weeks later, one of the thieves lies dying in a Tokyo hospital, shot by his own accomplices. Recently released convict Eddie Spanier (Robert Stack) arrives in Tokyo, and joins up with the gang, impressing Sandy so much he quickly becomes his "ichiban" (number one man), greatly displeasing the former favourite, Griff (Cameron Mitchell). But is Eddie all he seems?

Also starring the beautiful Shirley Yamaguchi, House of Bamboo is a stunning, brutal masterpiece, featuring incredible widescreen photography by Joe MacDonald, and hard-boiled dialogue and action that is the Fuller trademark.