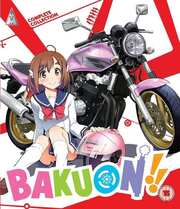 If there’s one thing that the year of Covid has afforded me, it’s the opportunity to attack my anime backlog; especially those DVD titles that I double-dipped to Blu-ray. I’m getting close to the end of the pile now, and the last couple of titles I had were Flip Flappers and Girlish Number, titles which for various reasons had rather dismal DVD releases, and for which a Blu-ray upgrade was more essential than usual. Seeing how few double-dipped titles I have left, and the fact that I’m essentially re-watching them in release order, I had suspected that trend to DVD mediocrity would only get worse. Only it turns out that Bakuon’s DVD release was one of the good ones. So once again, I ask myself why I double-dipped, especially for a title that I only gave 7/10 to when I reviewed it? Maybe there’s more to Bakuon!! than meets the eye. 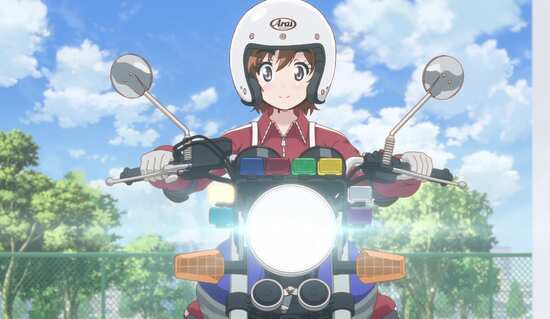 Onsa Amano joined her high school for one reason and one reason only. It’s nothing to do with the teaching, or the amenities. It’s just that it’s the one school that allows girls to ride their motorcycles to school, and it has an after school motorcycle club. On her first day on the way to school, Onsa even inspires one young cyclist named Hane Sakura to upgrade to a two-wheeled transport with power. But while the school may allow motorbikes, the club is actually defunct, winding down, with just one enigmatic upperclassman member left, Raimu Kawasaki. If they want the club to succeed, Onsa and Hane will need to recruit more fans of two-wheeled transport, and Hane will have to learn how to ride and get her licence as well. 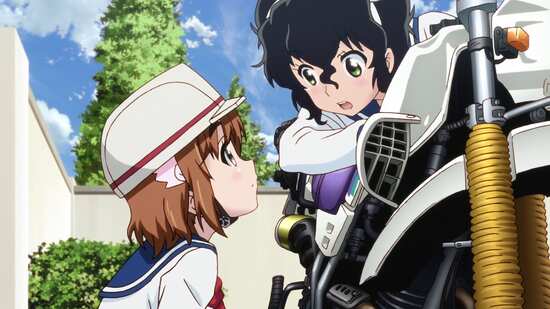 The twelve episodes of Bakuon!! are presented across two Blu-rays from MVM. 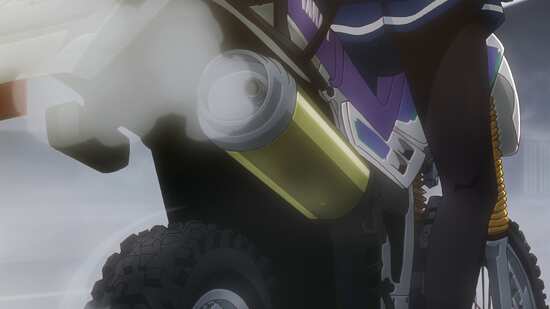 Bakuon!! gets a 1.78:1 widescreen 1080p transfer on these discs. Sentai had split the show across three DVDs for its SD release, so things looked as good as they could get for that format. Bakuon!! still manages to pull something extra out of the bag for high definition. Colours are strong and consistent, detail levels are excellent, and the animation comes across smoothly. There’s no compression, aliasing or even digital banding to my eye. Bakuon!! is a comedy anime, and the character designs are warm and appealing, while sticking to the usual stereotypes. The world design is recognisable if not exactly unique, and a whole lot of CGI goes into making the motorbikes look realistic. 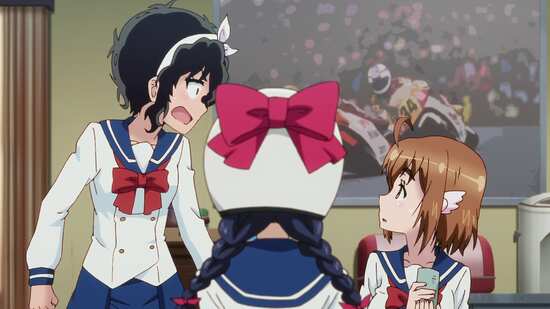 Bakuon!! gets a DTS-HD MA 2.0 Japanese audio track with translated English subtitles locked during playback. The audio is fine, the characters performed well by their respective voice actors, as they bring out the expected quirks and foibles for their particular character tropes. The stereo does enough to bring the action to life in what is really a comedy show, and the show’s music works well. The subtitles are timed accurately and are free of typos. 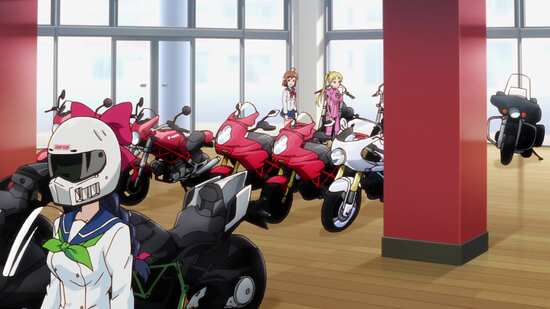 You get two discs on each inner face of a BD Amaray.

The discs present their content with static menus and jacket pictures. Each episode is followed by a translated English credit reel. The extras are all on disc 2

You get two textless openings and three textless closings. There is 3:21 worth of promo videos, some of them live action. 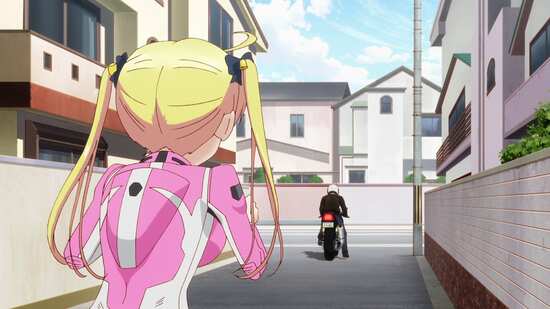 Live Action Behind the Scenes lasts 6:42 and looks at the filming of those promos.

2:13 are spent on the Bumpers, the bits around the advert breaks.

There is a 7 second safety warning. 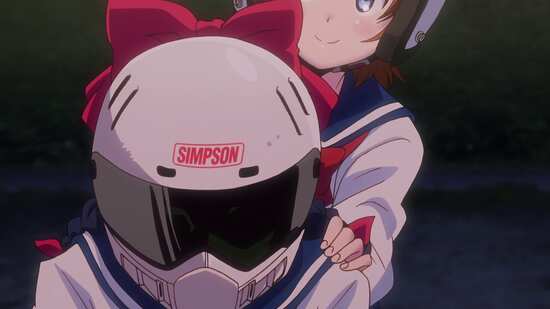 The Bakuon’s Closet Shorts are 6:18 of short comedy animations with the characters, just set-ups and punchlines.

And finally on this disc there are trailers for Wakaba Girl, Aoharu x Machinegun, The World God Only Knows, and Amagi Brilliant Park. 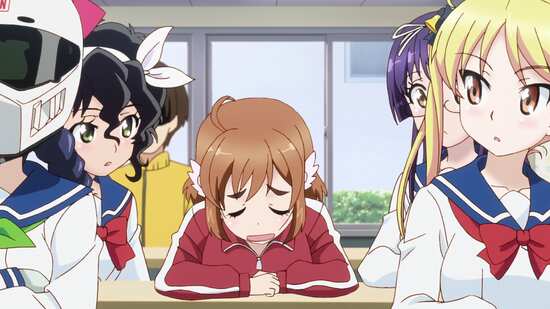 Quote:
Bakuon!! is K-On! but with motorcycles instead of musical instruments. That’s an easy comparison to make with any anime about an after-school club populated solely by cute girls, but Bakuon!! is closer than most. Its main protagonist, Hane Sakura is a cyclist who falls into the club with hardly the slightest idea of what motorbikes really are. She’s ditzy, a little goofy, and falls into the habit of anthropomorphising and talking to her motorbike. She also has a younger sister who is more level-headed and mature than she is. So not like Yui at all. Of the other members of the club, Onsa Amane is the most like Ritsu, the driving force behind the club, and passionate fan of motorbikes. The other members are a little more generic, Rin is a bit of single-minded tsundere with a love for all things Suzuki, while Hijiri is a rich girl princess type who lets her butler do the driving while she rides in a sidecar. As for Raimu-senpai... I’ll get back to her. 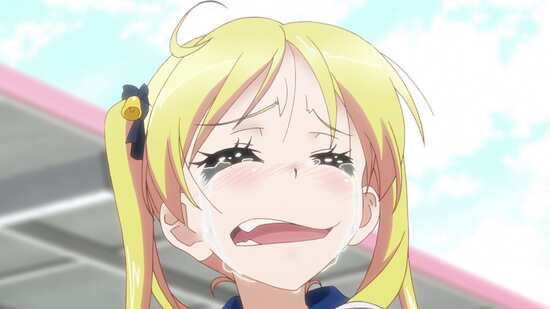 In the second year, they get a cute new recruit who’s actually more serious about motorbikes than any of them, Chisame Nakano who is a short, cute junior racing champion whose legs don’t reach the ground on any adult bikes. And she’s not like Azusa Nakano in any way whatsoever... My problem at this moment in time is that I’ve been re-watching K-On! while I’ve been reviewing Bakuon!! I get to see the original next to the cheap knock-off side-by-side, and that really does make for an unfair comparison. 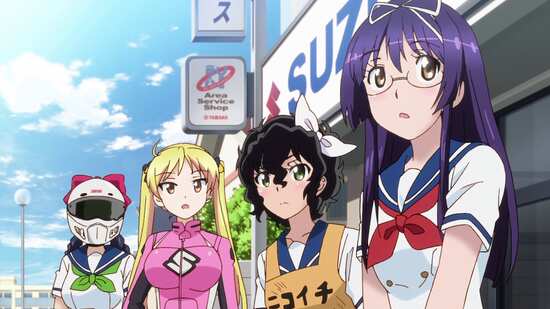 That’s because taken on its merits, Bakuon!! is a fun little slice of life comedy, about a bunch of girls bigging up Japan’s motorbike industry. Each of the major manufacturers is represented, Rin’s Suzuki, Hane’s Honda, Onsa’s Yamaha, and Raimu’s Kawasaki. Just to be perverse, Hijiri rides a Ducati, the running joke being that a foreign bike is so unreliable, that the rich princess is always buying a new bike and having it airlifted in. Eventually, Chisame decides that bikes are just for the racetrack, and buys a scooter. 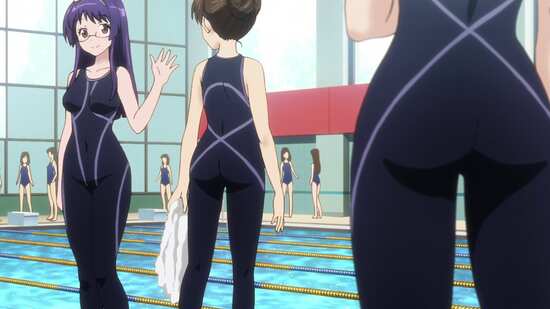 It’s the usual formula for the show, girls trying to get a fading club to revive, getting enough in the way of members, finding a supervisor, going on a trip, doing something for the Culture Festival, enjoying Christmas and New Years, and there’s bound to be a bikini episode in there somewhere. Bakuon!! has more than its fair share of fan service, with one scene of bikini clad girls washing their bikes probably nudging the BBFC certificate upwards. 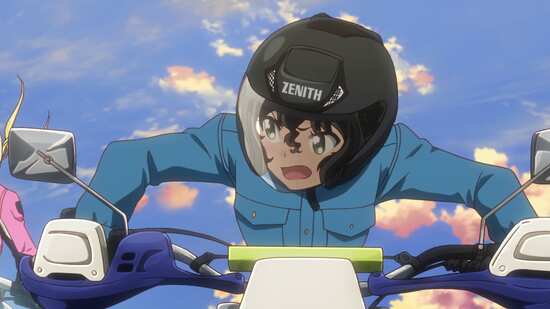 Then there is Raimu-senpai who is the Stig. I have to believe that the creator of this story has seen Top Gear, as Raimu never says a word, and never takes her helmet off, and she rides like a demon. She’s an eternal student who was apparently at the school with the current principal, and has avoided graduating ever since, and who may just be a ghost. There’s plenty of fun to be had with the show, wacky characters and daft situations, motorbike instructors that look like crash test dummies, a motorbike Jesus with a halo over his helmet, Onsa’s family running a dodgy motorcycle dealership and plenty more. 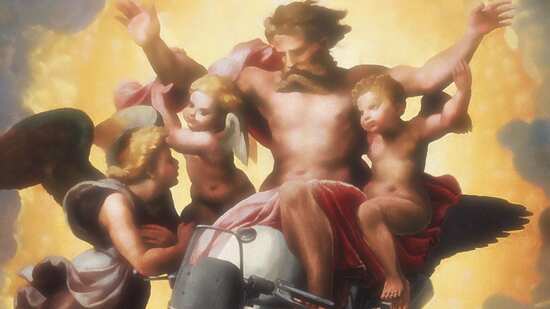 Bakuon!! may be K-On! recycled with motorbikes, but that doesn’t stop it from being entertaining and very watchable. That it resorts to clichés and fan service is a small mark against it, but it kept a smile on my face during its runtime, and if a show can do that, it’s already won half the battle. 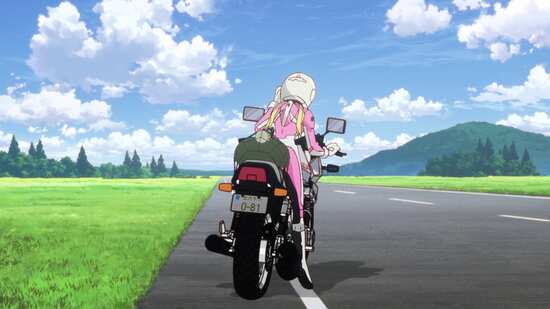 That is what I wrote for the DVD review, and I have to say that it is just as valid today as it was then. What’s different is that this time I wasn’t watching Bakuon!! back to back with K-On!, and the comparisons weren’t staring me in the face. I was watching Bakuon!! on its own merits, and I have to say that I enjoyed it a lot more the second time around. The characters are all likeable, the humour really works well, the geekiness working with broad audiences (you don’t need to know motorcycles to get the characters’ passions), and every episode put a smile on my face. I love it when a show is even better the second time around, and I am so glad that I decided to double dip this one to Blu-ray.