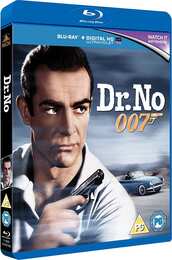 DVD
From Russia With Love: Special Edition (James Bond) (US)

Review for Dr. No

It is utterly bizarre to see Bond movies in the bargain bucket, but that is indeed where I found Dr. No when I felt the need to see again where it all began. It’s that 20th Century Fox thing again, although this time I am not urging you to race out and fill in your 007 collections. Bond has been around the houses in its time, beginning with United Artists, before moving to MGM, and then to Sony. The most recent distribution of the Blu-rays has come from 20th Century Fox, and with Disney now owning that studio and their back catalogue, they’ve been looking to erase the Fox name and liquidate existing stock. It shouldn’t matter here, as Bond isn’t a Fox brand, and will no doubt be picked up by another distributor in good time, and the Fox logo isn’t even on the packaging, only at the head of the discs. More meaningful is the fact that Bond is the biggest movie franchise in history and is never likely to go out of print. It’s just that right now is a good time to pick up a Bond bargain if you shop around. 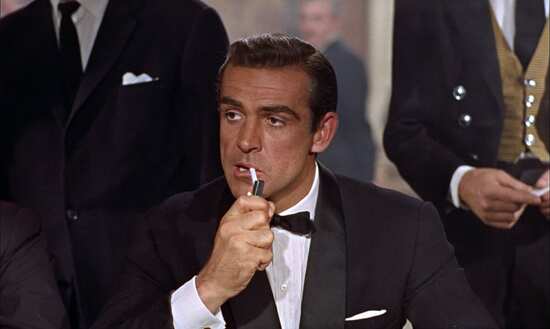 When a British agent named Strangways vanishes in Jamaica, it becomes James Bond’s mission to discover what happened, made imperative as US rocket launches from Cape Canaveral are being interfered with, and circumstantial evidence suggests the Caribbean as a source of that interference. With a moon-shot in the offing, time is short to uncover the truth. All the leads point to an enigmatic businessman with his own island off Jamaica, a man named Dr. No. 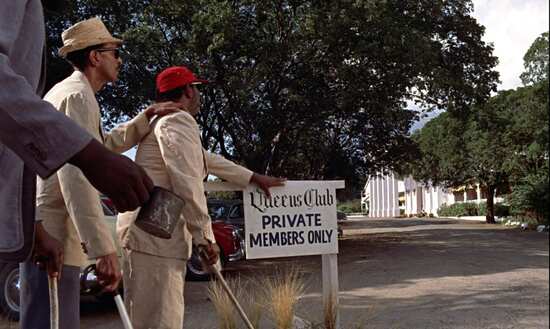 I think this might be the first time I’ve ever seen Dr. No in its original aspect ratio of 1.66:1, presented here at 1080p pillar-boxed resolution from a 4k restoration from Lowry. You have the choice of DTS-HD MA 5.1 Surround English, and DTS 5.1 Surround German and French, DD 5.1 Surround Spanish, Czech and Portuguese with subtitles in these languages and Dutch. While the original audio might have been preferable, the surround track does a fair job of keeping things mostly centralised, without getting too creative with a surround up-mix. I did feel that volume levels were a tad low. Lowry’s restoration work has its critics, and it’s certainly getting on in years now, but Dr. No looks pretty decent on this disc, clean and sharp, with rich, consistent colours and a consistent level of film grain. That might explain varying degrees of softness, depending on how much grain there was in the source to begin with, and how much it had to be compensated for, but you’re less likely to notice that softness in darker scenes, day for night scenes, or scenes with obvious rear projection. The familiar James Bond theme made its debut in the first film, and given the absence of the usual theme song to develop, it might feel as if John Barry’s unmistakeable arrangement is a tad overused. 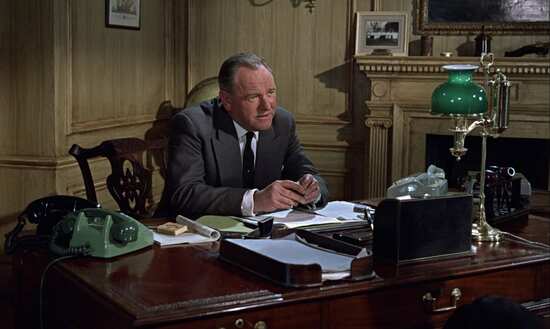 You get one disc in a BD Amaray and a UV code for a digital copy that may or may not be expired by this point. The disc boots to an animated menu with plenty of naked girl silhouettes.

The disc is full of extras from Bond releases past in various resolutions. As usual, they’re all categorised under rather stupid titles, instead of being presented plainly. 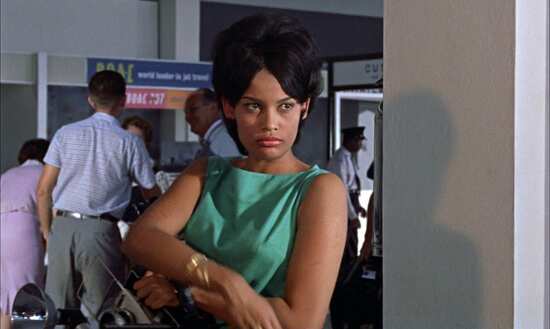 The MI6 Commentary is a patchwork affair, interview snippets from the cast and crew with extensive moderation, but which somehow still manages to be scene specific.

Top Level Access contains 007: Licence to Restore, which is an 11:56 Lowry featurette.

Declassified: MI6 Vault contains The Guns of James Bond, a 5:06 vintage featurette, and Premiere Bond: Opening Nights, which looks at all of the movie premieres up to Die Another Day. 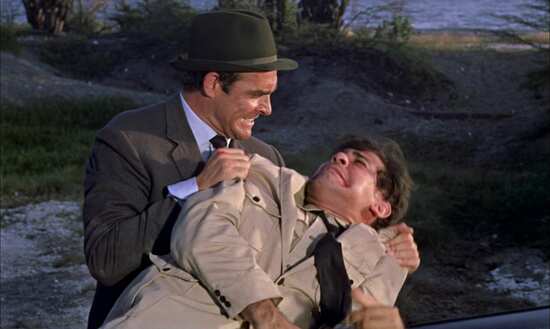 007 Mission Control is the dumbest offering on this disc, it’s a character listing and glossary which will play the clips featuring that particular character, item or plot point from the film, and then jump back to the menu, or the point in the film you left off. 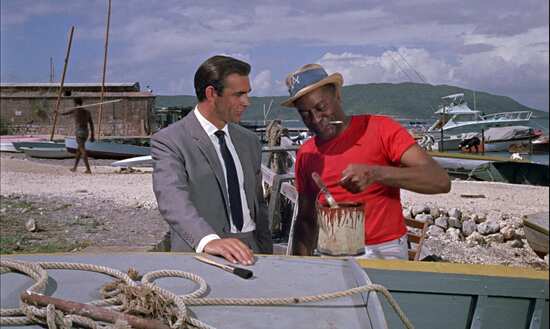 Mission Dossier has the behind the scenes featurettes. Inside Dr. No is the 42:10 making of documentary, Terence Young: Bond Vivant is a profile of the director which lasts 17:57, and it turns out that they had EPK featurettes even before the invention of VHS with the original Dr. No 1963 Featurette (8:40).

The Ministry of Propaganda offers all manner of film, TV and radio trailers for Dr. No.

The Image Database offers 8 categories of image gallery to go with the film. 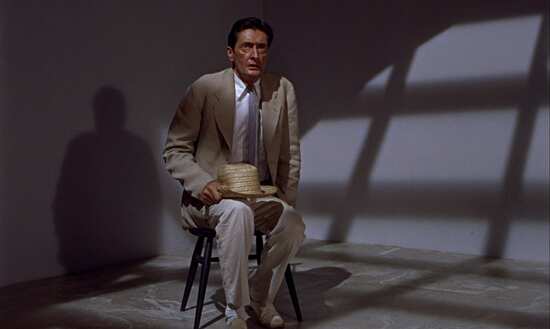 No Time to Die apparently had a budget of $250 million, which is mind boggling when you think about it. In 1962, Dr. No’s budget was $1 million, £300,000 back then, £6½ million in today’s money. What they managed with that money really does show on screen though, with the sole apparent concession to the budget the lack of the globetrotting that would become a staple of the franchise. There are just two locations in this film, London and Jamaica, and even the UK sequences are mostly studio-bound. But Dr. No was the experiment, the big gamble on whether film audiences would be ready for the adventures of this particular secret agent. Yet Dr. No wound up setting the template for all of the James Bond films that would follow, although there would be a few additions along the way. 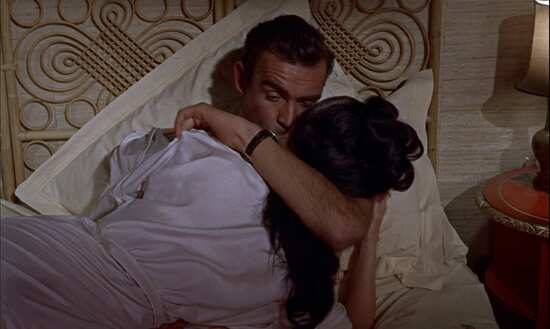 Yet there is one big difference in this film, again no doubt necessitated by the budget. Today we know James Bond as an action hero, no movie would be complete without a pre-credits stunt sequence, and the film will invariably up the action as the film heads towards a big budget, screen filling climax. But Dr. No is less an action movie than it is a detective thriller, with Bond actually having to do no little sleuthing as he tracks down the villain of the piece. He’s even referred to as a detective and a policeman in the film. The action sequences when they occur are abrupt, brutal, and none too elaborate. It’s only at the climax of the film, on Dr. No’s island that that the derring-do Bond-ery that we now expect as a matter of course is established. 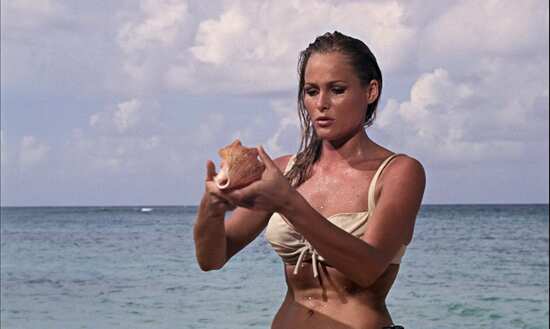 You can see from the off just why Sean Connery owned the role, and why for many people he is still the best Bond. He’s got the suave wit and erudition down pat, and he has a facility with throwaway sardonic one-liners that Arnold Schwarzenegger would envy. But this is all a thin veneer over a casual, cold brutality and sense of danger that is perfect for a secret agent, licensed to kill. When he has his eyes set on a target, you wouldn’t want to get in the way. What Sean Connery manages with just one look in this film, no other Bond actor has managed. 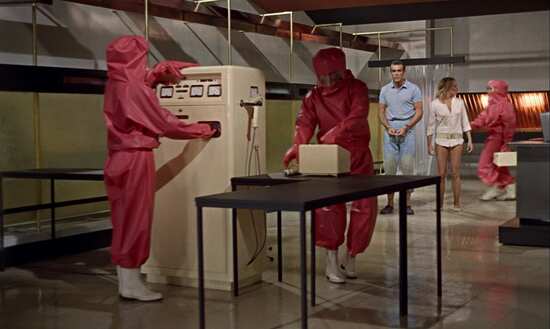 Dr. No does set the template, and is replete with iconic moments, but it does suffer in the end from the lack of budget, and feeling underwritten. Perhaps it’s the subsequent films’ obsession with gadgetry and technobabble, but the threat in Dr. No feels underdeveloped and vague. Rockets in Florida are being interfered with, but we never really learn how. All we know is that Dr. No is the creepy guy with a private island with a nuclear reactor on. He makes mention of S.P.E.C.T.R.E. as his overlords, but we never see his secret weapon used successfully. In addition, Dr. No is a rather weak and ineffectual villain, far more menacing as a disembodied voice than he is in person. Ultimately, the film ends in an anticlimax which just doesn’t satisfy. In an odd way Dr. No has this in common with the most recent Daniel Craig reinvention of the character, and I find I felt much the same way about Casino Royale. But Ursula Andress in that bikini! Many a young boy had an awakening to Dr. No! 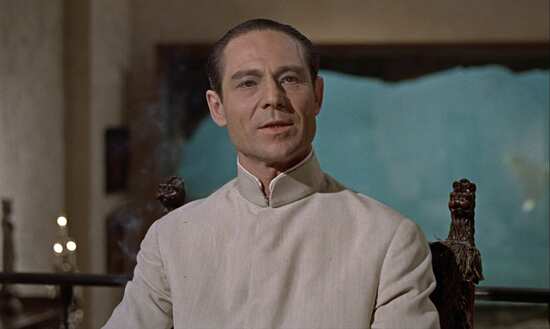 It’s not the best Bond movie, but without Dr. No, there would have been no others. While it sets certain stylistic choices in stone, there are enough things different about the first Bond movie necessitated by its budget, that make it worth seeing for those differences alone. As mentioned, circumstances around distribution means that Bond movies are as cheap as chips right now, so what better time to indulge in some pure escapism?