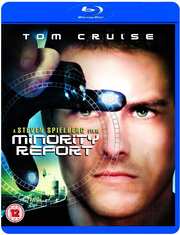 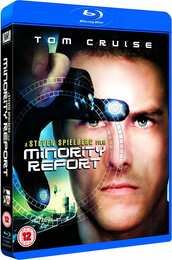 Minority Report is a Twentieth Century Fox release. Yes, this is another public service announcement reminding you that if you love a film, and Fox released it, get it now; don’t wait, don’t hesitate, don’t prevaricate or procrastinate. Disney bought Fox from Murdoch, and the first thing they’ve done is erased the Fox, renaming it Twentieth Century Pictures. Anything with a Fox logo is effectively deleted, out of print, and there’s no guarantee that Disney will ever re-release it, or provide the kind of glut that casual buyers can appreciate if they do. Given the way they treat their own catalogue, and their recent preference for streaming services they can control and censor, as opposed to physical media they cannot, discs like Minority Report might just be an endangered species.

In Washington DC in the year 2054, law enforcement has a whole new approach, at least when it comes to homicide. John Anderton heads the Precrime Division, a unit that arrests potential murderers before they commit their crimes thanks to the visions of three prognosticators. The pre-cogs will receive visions just before the crime, and it’s up to John Anderton and his team to sift through the imagery generated, find the clues to the crime, the victims and killer, and the location, and then get there in time to prevent the crime from happening, and put the potential killer on ice.

With a tragic past, John Anderton is the poster child for the Precrime Division, a unit that has practically eliminated murder from the Washington DC area, and the program is about to be expanded nationwide. And then the pre-cogs have a vision of a pre-meditated murder, for once giving them a lot more time to investigate than the usual crimes of passion. That no one knows the victim is no surprise, but the name of the killer comes as a shock, as does the image in the pre-cog vision... It’s Detective John Anderton.

Minority Report gets a 2.40:1 widescreen 1080p transfer with DTS-HD MA 5.1 Surround English, DTS 5.1 Surround Italian and Spanish with subtitles in these languages and Danish, Finnish, Norwegian, Swedish, Greek, Icelandic, Hebrew, Slovenian, and Bulgarian. The image is clear and sharp, with excellent detail, a properly filmic look with natural film grain, and an icy cold colour palette that suits the story. The effects still hold up well after 18 years, although there might be a small issue. The audio is excellent, just as immersive and effective as you’d want, bringing across the action well, and a signature John Williams score, while keeping the dialogue clear and focussed.

The issue is with how the Blu-ray compares to the original theatrical experience (and the DVDs). At the time, much was made about the Bleach Bypass process used to give the film its desaturated look to the point that it felt washed out. Apparently they went back to the original camera negative for a director approved transfer to Blu-ray, and this time they opted for digital colour timing instead of the Bleach Bypass. Certainly the colours look desaturated, there is a distinct cool look to the film, and as Billy Connolly once described his complexion, Tom Cruise too is a pale blue in this film. Losing the Bleach Bypass does gift more detail to the image, and it allows for a greater palette of colour to be defined, even in the cool end of the spectrum, but it does mean that some of the digital effects work can stand out at times, where previously the Bleach Bypass hid the seams.

Here's an example of how the film looked on DVD.

You get one disc in a BD Amaray case. Minority Report came out on Blu-ray in 2010, eight years after the DVD, and that has allowed Fox to give it a whole ‘new’ extras package.

The Future According to Steven Spielberg: An Interactive Guide to Minority Report is what you need if you don’t like menus. This is a 34:01 interview which comes overlaid with pop-up options that allow you to break out to other interviews, behind the scenes footage, and imagery. Apparently this allows you to access all the material on the disc in a contextualised way. Of course you can watch each item separately from the extras menu as well.

This is all the new material on the disc and is in HD. Another menu option takes you to the 2002 featurettes which gives you everything from the DVD in SD format.

From Story To Screen, Deconstructing Minority Report, The Stunts of Minority Report, ILM & Minority Report. Final Report: Steven Spielberg & Tom Cruise, and the Archives containing the Production Concepts and Storyboard Sequences Galleries, as well as three Trailers. All in all, that’s over 82 minutes of extra features from the DVD.

There is a degree of clarity and detail in this Blu-ray release of Minority Report that this new transfer has achieved by means of modern digital colour grading that wouldn’t have been possible if the original theatrical print had been used. But there’s part of me that misses that old Bleach Bypass Minority Report, as that is how I saw it in cinema, and how I’ve watched it on DVD time and again. That is a chemical process on physical film, with all the flaws and magical discoveries such imperfections allow. Your mileage may vary, but in this case, it might be worth holding onto the old DVD release so you at least have the choice.

I still feel the same way about Steven Spielberg’s Minority Report though, and even though he makes one of his darkest, most nihilistic movies yet, I don’t think he was the right director for the material. Philip K. Dick’s prognostications and speculative fiction can be thought provoking and mind-bending at the best of times, and the best adaptations have come from directors who push the boundaries of the medium. When Ridley Scott made Blade Runner, he set the benchmark for cyberpunk cinema, created a visual masterpiece, and told a provocative and challenging story. Then Paul Verhoeven took We Can Remember It For You Wholesale and turned it into a subversive and satirical action movie.

Steven Spielberg is far too mainstream a director for Philip K. Dick, and that tells in Minority Report, a film that is interested in the surface of its story, is not too bothered in challenging the audience with its ideas, and doesn’t really want to contemplate the societal consequences of this speculative fiction. What you do get is an action packed, sci-fi thriller which is a load of fun to watch. The story may be straightforward, but it’s interesting enough, and for a long time now, Tom Cruise has had roles like John Anderton down pat; the hero having to deal with the world after having all of his preconceptions and beliefs kicked out from under him. Here he’s the true-believer Precrime cop who has to suddenly see the other side of the coin when his own system flags him as a potential murderer. Thrilling chases and action packed sequences ensue as he has to investigate the potential crime that he’s accused of intending to commit.

I said it when I reviewed the DVD and it’s just as valid for the Blu-ray as well. Steven Spielberg’s Minority Report is all surface and not enough depth, but it’s just as watchable and as entertaining as any other Steven Spielberg film. If you’re looking for the original theatrical experience, then be aware that the Blu-ray won’t give you that when it comes to the visuals. But it is still a quality release; very watchable, with great audio and a decent selection of extra features.