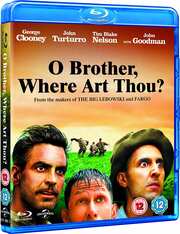 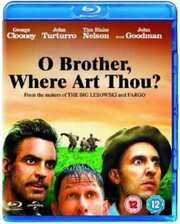 DVD
Man Who Wasn`t There, The (UK)

Review for O Brother, Where Art Thou?

There was a period at the turn of the millennium where cinema fell in love with the ancient Greek epic again. Swords and sandals had been made popular once more by Gladiator, but as ever the real juicy stories lay in ancient Greek mythology, and so we got films like Troy, 300, and the Clash of the Titans remake. But in 2000, the Coen brothers made a US depression era musical comedy adventure that might just be the best Greek myth movie of them all. O Brother, Where Art Thou? is based on Homer’s Odyssey.

Ulysses Everett McGill has just escaped from a chain gang, although as he’s chained to Pete Hogwallop and Delmar O’Donnell, staying ahead of the posse isn’t an easy matter. But they have the promise of riches to spur their flight. There’s 1.2 million dollars buried near Everett’s home. The only problem is a deadline, as in just a few days, a dam will open, and the valley, and the money will disappear under millions of gallons of water. It’s a race against time, but the trio run into some fantastic adventures on the way.

O Brother, Where Art Thou? on Blu-ray dates from 2013, but the 2.35:1 widescreen 1080p transfer in the VC-1 codec stands up pretty well. The image is clear and sharp, detail levels are excellent, and while blacks tend to be a little crushed in the darkest of scenes, it’s not a significant issue. This film is notable as one of the first films to be digitally colour graded instead of optically, and the sepia look of the film, the beautiful cinematography comes across wonderfully on this disc.

The audio comes in DTS-HD MA 5.1 Surround English, and DD 5.1 Surround French, German, Italian, Spanish, and Portuguese with subtitles in these languages and Dutch. It’s a nice, effective and immersive surround track, which really brings to life the period setting, making the most of the film’s eclectic and authentic music soundtrack. The dialogue too is clear throughout.

You get one disc in a BD Amaray, which after an anti-piracy thank you boots to the Universal stock animated menu.

There are no extras on this disc. The 2011 disc from Buena Vista has a handful of featurettes and is region free, but the real message here is to hold onto your DVD for the best extra features, especially the 2 disc UK special edition which pretty much has them all.

There is a part of me that has an irrational hate for O Brother, Where Art Thou? This was apparently the first Hollywood film to use digital colour grading to achieve its look, with only computer software offering the required control and finesse to achieve the desired sepia tones so reminiscent of the Depression of the 1930s. Joel and Ethan Coen tried doing it the traditional way, the chemical process known as colour timing and it just didn’t work. It’s just bad luck that it was this film, and it could have been any other, but for me this opened the floodgates (pun intended) that has led to the last 15 years of orange and teal action movies coming out of Hollywood on a conveyor. Just because you have the tools, doesn’t mean you should use a nail gun for screwing in a light bulb. Avatar came out in 2009 and rejuvenated the 3D fad, but that didn’t even last for 10 years before the studios and the TV manufacturers ditched it again. There’s no sign of heavy-handed blanket colour grading going away though.

That petty rant aside, The Coen brothers’ version of the Odyssey is a delightful and charming comedy, with some surprisingly catchy and atmospheric music. Everett, Delmar and Pete are a Laurel and Hardy trio, with a dumb one who thinks he’s smart, leading two other dumb guys on a hare-brained adventure. Everett has the gift of the gab, which results in some of the juiciest and most satisfying dialogue ever put to celluloid. You could call this a quotable film, only there’s just so much of it.

It’s a quest movie, with each new ‘chapter’ in the trio’s escape a new little adventure. You get characters like the Oracle, the Cyclops and the Sirens appearing, but all told in the vernacular of the depression era South, as Everett and the others run from a relentless posse. The oracle is a blind man working the railroad, the Cyclops is an imposing bible salesman, and the sirens are a trio of seductive women washing laundry in a river. This all takes place during a political campaign for governor, and the two storylines intersect on more than one occasion.

Early on they meet Tommy Johnson, a man who claims to have sold his soul to the devil in exchange for ungodly talent with the guitar, on the rumour that a local radio station will pay people to ‘sing into a can’, and later on there is an encounter with the K.K.K. that is very period specific and quite chilling, although it turns into the best joke on the folks in the white hoods since Blazing Saddles.

O Brother, Where Art Thou? is a unique piece of work. In terms of cinematography alone it is worthy of a place in any collection, but the wonderful characters, the engaging story, the way the narrative so effortlessly blends Greek myth with the Depression era, and of course just how entertaining and funny the film is makes it a must own film. The only downside to this Blu-ray is just how barebones it is. Surely a film like this deserves much better in terms of extra features. But when it comes to the visuals and the audio, it’s a worthy upgrade to the DVD release.