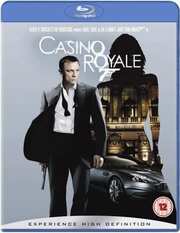 You have to wonder what a film like Casino Royale would be doing on a pound shop shelf. I mean a big budget, James Bond movie, one that got no little critical acclaim, residing in a budget shop? There has to be something wrong there. Turns out that I picked up the 2008 release of the film, the theatrical cut rated 12. There was a subsequent, extended version of the film released in 2012 rated 15. Apparently all of the pre-cuts made by the studio to get the audience friendly rating, were then reversed. You can see all the James Bond fans getting that new one, and unleashing thousands of the earlier discs onto the second hand market.

I’m not too bothered about a few edits, which is unusual for me to be honest. But the fact of the matter is that I never really got into the new brand of Bond. A more serious take on the character, and an apparent choice to ape the Bourne movies stayed me away from the Daniel Craig movies until I saw the superlative Skyfall. But I’m still hesitant to indulge in a franchise that I fell in love with for being tongue-in-cheek and frivolous; and the perfect level of seriousness was for me achieved in the Timothy Dalton movies. But I have to say that one thing does interest me about the Daniel Craig Bonds. The producers have taken the choice to give his Bond a degree of continuity and character development that the other Bond movies eschewed. We’re following this Bond from recruitment to retirement and I have to say that is a compelling approach.

James Bond may have qualified for his licence to kill, but his attitude doesn’t sit well with M, especially when he assassinates a suspect in a foreign embassy. But Bond uncovers evidence that leads to a notorious banker named Le Chiffre, financier to terrorists worldwide. He’s a man with few weaknesses, but one is gambling, unfortunately with his clients’ money. When Bond thwarts a terrorist attack that would have made Le Chiffre a whole lot of money, the banker needs to get that investment back quickly, and that is only possible at the Casino Royale in Montenegro. If Bond can beat Le Chiffre at poker, MI6 will have some serious leverage. But the $10 million stake will need watching over. The watchdog happens to be a provocative woman named Vesper Lynd.

Casino Royale gets a 2.40:1 widescreen 1080p transfer which on this relatively early BD release still looks pretty fine. The image is clear and sharp, detail levels are excellent and the colours are consistent. Following Die Another Day, Casino Royale looks pleasantly understated when it comes to visual effects and CGI, and most of the action and stunts look practically accomplished. You have the choice between PCM 5.1 Surround English, and DD 5.1 English, English Audio Descriptive, Czech, Hungarian, Polish, Russian and Turkish, with subtitles in English, Arabic, Bulgarian, Croatian, Czech, Hebrew, Hindi, Hungarian, Icelandic, Polish, Romanian, Slovenian, and Turkish. The audio is fine, does what it needs to get the action across, while keeping the dialogue audible. The music is suitably Bond-ian, although I can’t recall how long it’s been since I’ve been impressed by a Bond theme song. At least Chris Cornell’s dirge isn’t as painful as Adele’s.

You get 1 disc in a BD Amaray, and there is some decent inner sleeve art. The disc boots with a generic Sony Blu-ray trailer to an animated menu.

There are a handful of featurettes on the disc that are quite nice, but compared to classic Bond releases are really quite Spartan. No surprise that they went and re-released Casino Royale.

Becoming Bond lasts 27:24 and looks at Daniel Craig’s introduction to the Bond world.
James Bond: For Real lasts 24:33 and is the making of.
Bond Girls Are Forever (2006) is a 3 part documentary looking at Bond girls past. This lasts 49:00 and is an updated version of the documentary made in 2002 to include interviews with Eva Green and Caterina Munro from Casino Royale.
The Chris Cornell Music Video lasts 4:08.
Finally there are trailers for The Pursuit of Happyness and Stranger Than Fiction.

There is one sticking point for me with Casino Royale, and it’s not the new Bond. It’s actually the Bond girl, Vesper Lynd as played by Eva Green. To be honest, I am just not a fan of Eva Green as an actress. She just comes across as naturally snobby, which is okay in a role that requires it, as in Miss Peregrine’s Home for Peculiar Children but not here; it’s one of those instinctive reactions that have little to do with reality or genuine character, just irritation at first sight. So I can see on paper that Vesper Lynd is a rare superlative woman in Bond’s life, one that will shape his future. But I can’t feel it in the film, which in Casino Royale is a far bigger deal than any other Bond film besides On Her Majesty’s Secret Service. I need the relationship to work to fully invest in the story, and I just can’t.

Despite the Bourne-esque take on the film’s action, all up close, personal and plenty of fast editing, I really enjoyed Casino Royale for the new direction it took the Bond character, stripping him back to basics. He’s a newly minted agent in this film relying on his wits and skill to complete his missions and stay alive. Gone are the quips, and the gadgetry of the earlier Bonds, and in its place comes a very dark gallows humour, and a plot that proceeds with pace and no diversions. This may be a 144 minute film, but it never feels that long.

The antagonistic relationship with M is really the driver of this plot, with Bond an agent not only wanting to prove himself, but wanting to do things his own way, and you get the idea that M will only tolerate his methods as long as they gets results. The story is a globe-trotting adventure, as Bond follows the bloody breadcrumbs as they lead from the parkour bomber in Madagascar all the way to a confrontation with an evil financier in Montenegro.

If there is another weakness in the film, it’s the villains. Bond villains need to be larger than life, and have to own the screen to stack up against the hero, but most of the villains in this film are far too non-descript, and even the most flamboyant of them, Le Chiffre as played by Mads Mikkelsen never really registers. Perhaps it was felt that a more understated, realistic tone with the antagonist might match the new realistic take on Bond, but the end result is that the interest in the film really just centres on Bond’s journey from new agent to jaded veteran. It’s in this regard that Casino Royale really succeeds.

If I could invest in Vesper Lynd as a character, I’m sure I’d rate Casino Royale even higher, but as it is, it’s a really good spy thriller with some great action sequences, and compared to its predecessor, Dire Another Day, Casino Royale is a breath of fresh air. This isn’t the Blu-ray to get though, look for the version rated 15, it’s uncut, and it has a fair bit more in the extra features department.