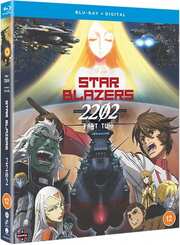 I loved Star Blazers 2199 when I saw it, an anime space opera given a modern, gritty edge, and given the way that it remade the original, I looked forward to Star Blazers 2202 a little more than my usual cynicism would allow. After all, while it is a sequel, it is itself a remake of the original, early eighties sequel to the 1970s original Star Blazers. That kind of remake usually proffers the opportunity to get things right that once went wrong, and update a show for modern audiences. But when Part 1 of Star Blazers 2202 did arrive, it still suffered from the usual pitfalls of a sequel, basically remaking the first series but with all the dials turned up to eleven. My eyes rolled when the villain of the original series turned up in what looked like a glorified cameo. Still, it was tremendously entertaining, and if it maintains that standard, Star Blazers 2202 will still be a fun show, even if it can’t be a memorable classic. 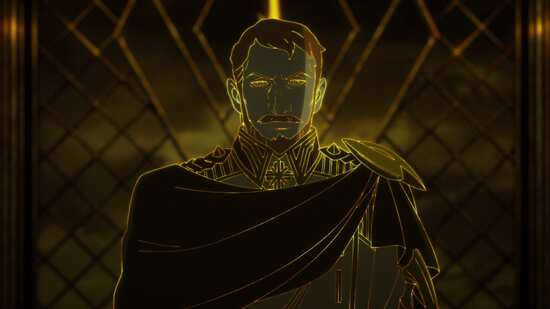 Three years previously, the Space Battleship Yamato was launched from a ruined Earth, as a last ditch attempt to save the planet from the evil Gamilans, who were intent on destroying humanity. It meant journeying across the stars to another galaxy to the world of Iscandar, in the hope of getting the technology to restore the Earth, and in the process, the crew of the Yamato discovered the truth about the Gamilans as well. To complete their mission, they made use of the prohibited Wave Motion weaponry, and as one of his last acts in command, Captain Okita promised that the weapon would never be used again. 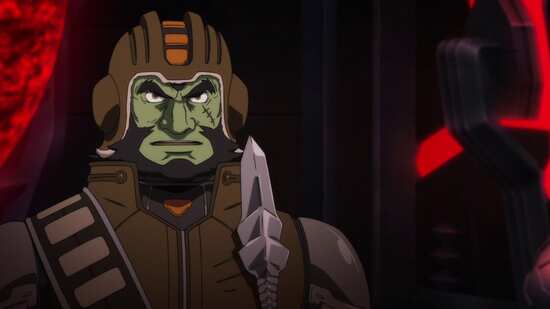 Now, the joint Earth Gamilan Alliance faces a new, darker threat, the Gatlanteans. Earth has a brand new fleet, and breaking the promise, they turn the Wave Motion weaponry against the Gatlantis fleet. That was a mistake, as now Emperor of Gatlantis Zworder has turned his full attention to Earth.

The concluding thirteen episodes of Space Battleship Yamato 2202 are presented in Part 2 across two Blu-rays by Manga Entertainment. 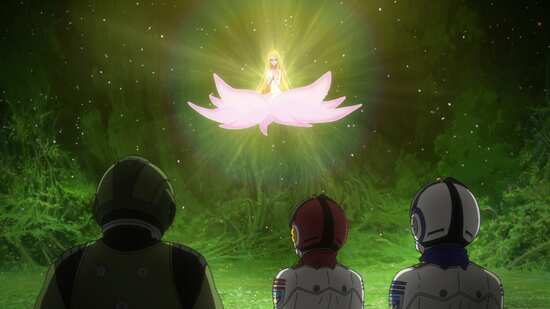 Disc 1
14. Zurvival’s Fierce Assault – Find Teresa
15. O Teresa, Cry For Desler!
16. Farewell Teresa! Flowers for the Two Deslers!
17. Battle off the Coast of Saturn – Gather the Wave Motion Fleet!
18. Yamato in Crisis – The Devil’s Alternative Once More
19. Heir to the Yamato, Her Name is Ginga
20. Gatlantis, the Cursed Children 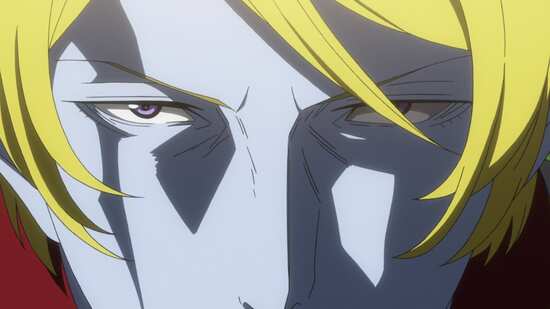 Star Blazers: Space Battleship Yamato 2202 gets a 1.78:1 widescreen 1080p transfer, and it’s up to Funimation’s usual standards. The image is clear and sharp, colour fidelity is excellent, detail levels are impressive, and the animation is smooth with no signs of compression or aliasing. However, digital banding is apparent in certain scenes, but given the space opera genre, and the plethora of dark scenes with bright light sources, the banding could have been a lot more prevalent than it is. Star Blazers is a fantastic anime. You get the impression from the character and ship designs that this is very much the seventies original, updated for the modern age with cutting edge effects, and dynamic direction, and with the vision of space adequately reflecting 40 years of advances in astronomy. Speaking of which, five years separated 2199 and its sequel, and one thing I did notice was more of a CG pristine sheen to the character designs, which on a couple of occasions looked excessively digital rather than organic. 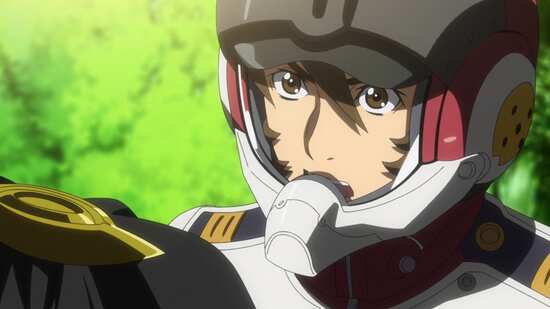 You have the choice between Dolby TrueHD 5.1 Surround English, and 2.0 Stereo Japanese with subtitles and signs locked during playback. It’s a quality production, with the requisite investment in sci-fi effects, bangs and whistles. The music too really suits the space opera genre, while the show gets a host of splendid theme songs (once again, no song lyric subtitles). I went with, and was very happy with the Japanese version of the show. 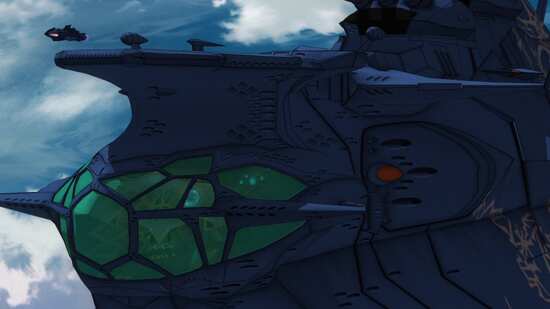 You get two discs on each inner face of a BD Amaray. You get an o-card slipcover, which with the reversible sleeve offers three variations of art to look at. You also get a digital copy to access if you’re a Funimation Now subscriber. The discs boot to animated menus. 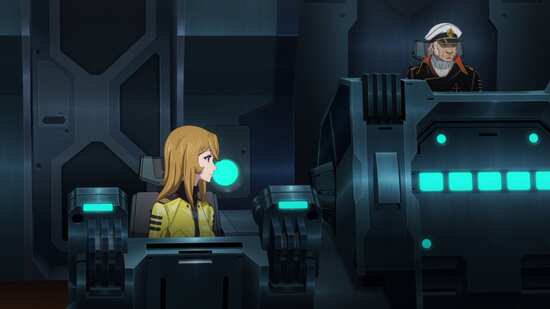 The extras are on disc 2 and include Star Blazers: Space Battleship Yamato 2202: Conversation with the Cast. This featurette lasts 25:41. 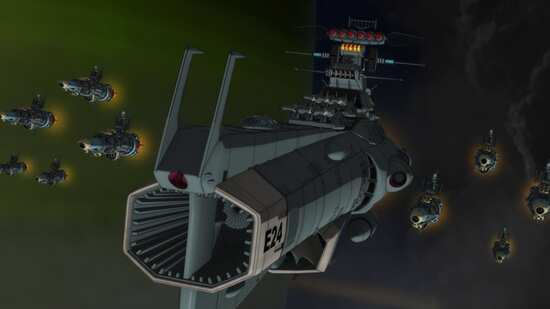 Finally there are four sets of textless end credits. 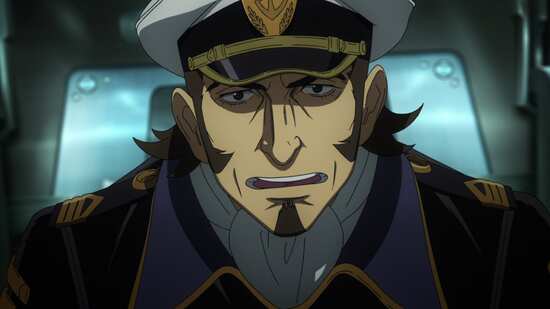 I feel like cutting and pasting the review for Part 1, as my complaints about the sequel series are almost as valid here. It’s a show that feels like a remake, but with everything turned up to eleven. Everything is just so much bigger, so much more intense that subtlety, nuance and interesting characterisation is left behind. There may be a lot more audiovisual crash, bang and wallop, but 2202 does feel like a smaller show. However, this second half of the series does address one complaint I had with part 1, and it must be said that comparisons aside, Space Battleship Yamato 2202 has turned out to be an entertaining and very watchable show. It is fun, and when it comes down to it, that’s really what matters most. 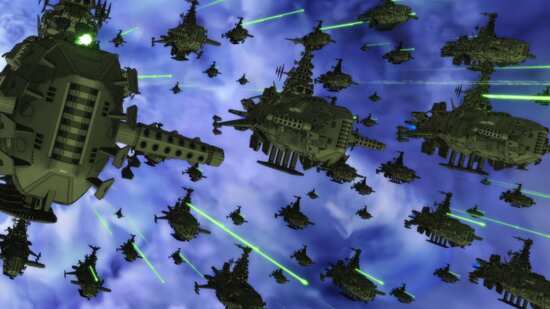 The one story complaint I had about part 1 was the return of the season 1 villain, Abelt Desler, which at the time felt like a gimmick. The way the story pans out in Part 2 actually develops his return in a really interesting way, which might make you look at the original series in a different light. In doing so, 2202 reveals another problem though, one with inconsistency. As the Yamato finally reaches Teresa’s homeworld, and makes contact, Desler shows up as well, and there is a whole lot of character development and story revelations here that really sow some seeds for the rest of the series. Then three episodes in, and the focus shifts to Earth’s solar system, and the immediate threat of Zworder and the White Comet. It really feels at this point that the whole Desler arc has been forgotten in favour of some massive space battles and planets being wrecked. Certainly Desler plays a part in the conclusion, but there is an on-off approach to the story that makes it a little jarring to follow. 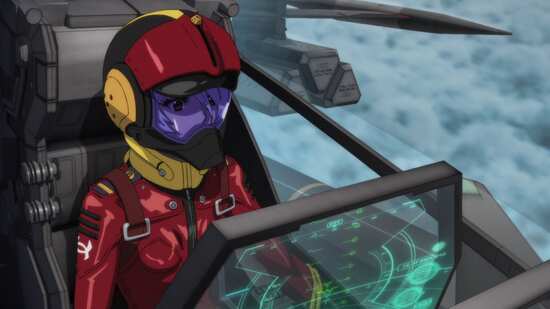 There is an attempt to add a little depth to the story, as we learn of Zworder’s past, and what motivates his rampage of extinction across the universe, but this is unsubtle stuff, a simplistic cause that everyone can relate to without thought or contemplation. Desler’s crusade in 2199 is a feat of political convolution in comparison. 2202 is all about bigger, faster, louder. The multi-ship fleet battles are so immense that the ships are like motes of dust in a sunbeam. The Gatlantis Citadel is so vast that it encompasses whole worlds kept captive in its cage like lattice, and thanks to a convenient plot device, Earth keeps on churning out space battleships by the thousands to throw at the encroaching Gatlantis menace. 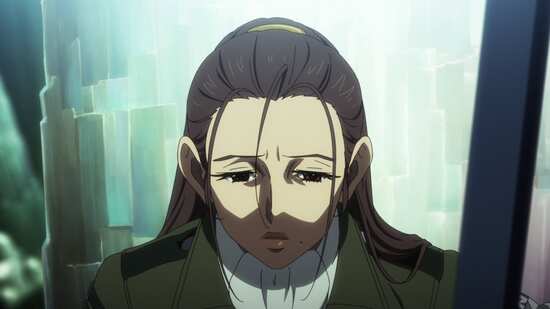 With a title like Space Battleship Yamato, you’d be justified in expecting lots of action, but this sequel series is really all about the action, especially in the last nine episodes. It very rarely takes the time to breathe and focus on the characters, so by the time the conclusion of the story comes around and the battles start demanding sacrifices, I certainly wasn’t invested enough in many of the characters to care. It also didn’t help that the show was recycling story beats from the original series. When a certain character lost their memory... again, I had to roll my eyes. By the end of the show, the physical action is so big that it slips into the metaphysical, and things get more than a little weird for the finale. 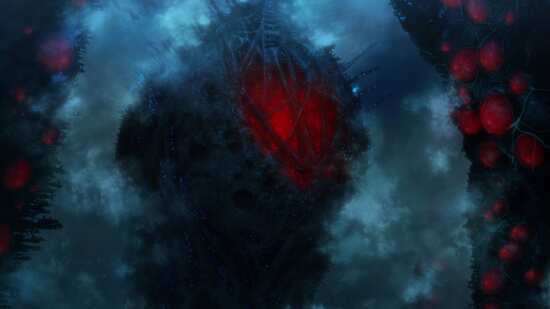 Star Blazers: Space Battleship Yamato 2202 isn’t a patch on the first series, but it does manage to hold its own in this final set of episodes. I had a great time watching it, the story is enjoyable, even if most of the characters are ephemeral as mayflies, and the show gets solid presentation on this Blu-ray release.