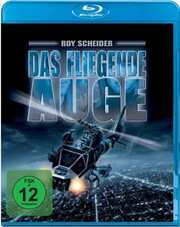 My re-watch cycle has caught up to the Blue Thunder television series, the 11 episode truncated run that briefly caught my imagination in my childhood, and a show that I pounced on when the DVD release came up for review. It wasn’t good when I reviewed it ten years ago, and now that I’m re-watching it, it’s positively bad. I can find few redeeming features in a childish show which is poorly written and poorly acted. I’m keeping an iPad close by when watching it just in case I need a distraction from the cheesiest moments. It is so bad that I suspect that I would have recognised that badness when I first watched it aged 10 or so. That all begs the question as to why I was so nostalgic about it when the review discs came around? I suspect it boils down to the Blue Thunder feature film, a film I first saw not long after the TV series, and have seen again on and off several times over the years. It’s been quite a while since my last re-watch, so naturally I placed an order for the Blu-ray, which at the time was cheapest on German import (it’s the same disc worldwide though).

Prior to the Los Angeles Olympics, concerns about crowd control and terrorism prompt a change for the Astro Division of the police, the branch that supports the police force from the air in helicopters. Frank Murphy is designated to test the Blue Thunder prototype along with observer Richard Lymangood. As well as being armed against established protocol, Blue Thunder also hosts a plethora of surveillance equipment, from imaging to audio. When a prominent councilwoman is murdered, Murphy uncovers a conspiracy around the helicopter that reaches to the highest levels.

Blue Thunder gets a 2.40:1 widescreen 1080p transfer on this disc with Dolby TrueHD 5.1 Surround English, German and French, with subtitles in these languages plus Arabic, Chinese, Dutch, Indonesian, Korean, Thai and Turkish. Blue Thunder looks fantastic on the Blu-ray, clean and crisp, with no signs of compression or print damage. The detail levels are excellent, black levels are solid, and contrast is spot on, essential in a film with a lot of night time scenes. The image has a decent level of grain and looks properly filmic. The audio is an up-mix quite naturally, and it does stay prominently front focussed, expect when it’s throwing explosions, helicopters and bullets around the soundstage. Thankfully the dialogue is clear throughout. The colloquialisms are a little dated, and made me skip back and flick the subtitles on to discover that I actually did hear what I thought I’d heard. What makes Blue Thunder special is the level of practical photography. They really did stick actors into helicopters and throw them around the sky amongst the skyscrapers of Los Angeles. There are process shots of course with fair bit of rear-projection, but not as much as you might think.

You get one disc in a thin BD Amaray case which boots to an animated menu.

On the disc you’ll find a rather patchy commentary from director John Badham and editor Frank Morriss.

Ride With The Angels: Making Blue Thunder is a three part featurette with a total run time of 44:41, looking at the script, the production and the post-production.

Complementing this is the 1983 Promotional Featurette which lasts 8:36.

The theatrical trailer lasts 3:21, and finally there is a BD Live link which does I know not what.

The extras all seem to be taken from a 2005 DVD release, and are presented in SD on this disc.

Blue Thunder the movie is as good as the TV series is bad. I had a great time wallowing in nostalgia with this film, and more impressively, I managed to find some things new in it that I hadn’t seen before, or more accurately the world situation has altered in such a way as to make this film relevant in a wholly different way.

A comparatively small but pleasant discovery is that the climactic stunt in the film, which for years I thought was an optical effect, turns out to be real. They actually loop a helicopter in camera. Admittedly it’s a radio controlled miniature (which would have a far more useful power to weight ratio), but the shot always looked fake to me, as if they just rotated the camera instead. There’s no object in the background of the frame for reference, not even a cloud, and they cut away for Murphy’s reaction shot during the scene. In the extras, they show the original footage without any cutaways, and sure enough, the helicopter loops. But that’s just a small aspect of the film that I learned for the first time.

All this time, for me Blue Thunder had been a warning from 1984, the prevalent threat of Big Brother, governments snooping on their own citizens, and the villain helicopter epitomised all that with all its electronic surveillance equipment, and its computer tied into every government database, to the degree that the honking great gun on the front felt like an afterthought. It’s when the snoopers get snooped upon by their own snooping machine that the plot really shifts up a gear until the film’s explosive climax. That element of action thriller is still a strong component in the story and it still works well today.

The film takes on a whole other degree of relevancy if you look at the motives of the conspirators. The ostensible reason behind Blue Thunder’s deployment is security for the Olympics, but Murphy uncovers details of Project T.H.O.R., Tactical Helicopter Offensive Response. If you pay attention to the background noise in the film, the news reports (Casey Wong from Robocop) and the like, you’ll see the film is set against a Los Angeles facing racial tension and violence. You have the government sending in military hardware to deal with civil unrest, and all of a sudden, 1983 looks a lot like 2020.

Blue Thunder is an entertaining action thriller, paced well with great characters, and stunning aerial action sequences. They would never make a film like this today; health and safety would probably have a heart tremor even if you did it all in CGI. The flying sequences in Blue Thunder were largely done for real, and after all this time, the few effects shots that are there still look great. The story unfolds at a healthy pace, the mystery and the conspiracy all hangs together well enough, and the film has just the right, dry sense of humour to balance its darker elements. This special edition Blu-ray release presents the film in a great light, and it’s well worth seeking out.