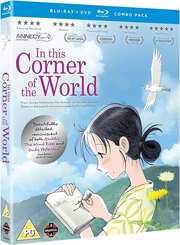 In This Corner Of The World (Blu-ray Details) 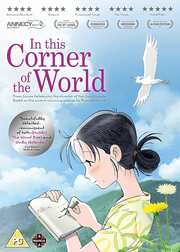 Review for In This Corner Of The World

I tend to avoid trauma, which is one reason why I’m reluctant to re-watch films like Barefoot Gen and Grave of the Fireflies, anime films that offer haunting reflections of the Second World War from the Japanese perspective. No matter which side of a war you may be on, there are always innocent victims, and seeing those real-world stories demands something from a viewer that a similar, but purely fictional story may not. You might think I would feel the same way about In This Corner of the World, after all, it is a tale about a girl from Hiroshima who gets married and moves to a nearby town in the early forties, and the hardships that she faces, but when I watched the DVD for review three years ago, I made sure that I placed an order for the Blu-ray pretty soon after. So what’s different about In This Corner of the World? 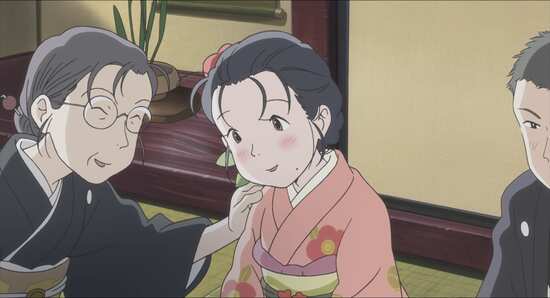 Suzu Urano grew up in a village near Hiroshima, the middle child of three siblings, with an older brother and a younger sister. She was an absent minded child, but she did have an amazing talent for art and telling tall stories. She reached her 18th birthday in 1943, and a match was made for her, a marriage that took place the following spring in the naval port town of Kure. Her new life with her new family certainly took some getting used to, especially with a critical sister in law, but gradually she found new joy in her life. Yet as the war draws to its close, the people of Kure face ever greater hardships, first in the form of rationing and conscription... and then the air raids begin. 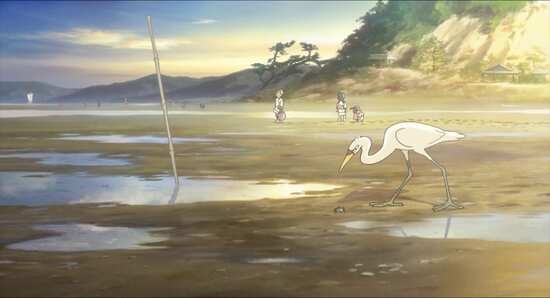 The Blu-ray gets a 1.85:1 widescreen 1080p transfer that is crisp, sharp, and rich in detail. There is no sign of compression, aliasing or banding, and in every respect it is a big step up over the already impressive DVD. In This Corner of the World boasts some beautiful artwork, doubly so given the quality of the animation, and Suzu’s artistic tendencies so often demonstrated in the film. The gentle and warm palette combines with appealing character designs, while the way the animators capture the quirks and mannerisms of the characters is really quite appealing. 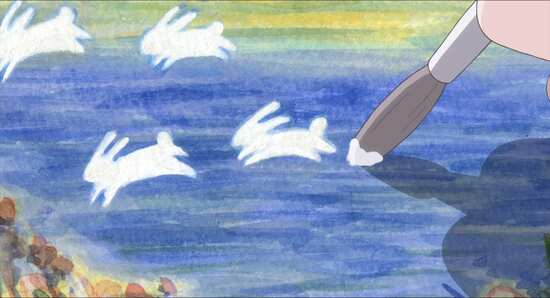 You have the choice between DTS-HD MA 5.1 Surround English and Japanese, with optional English subtitles. There is no signs and lyrics track and unlike the DVD, the screen text and song lyrics are presented as part of the subtitle stream, so no joy for English language viewers. You do get that problem with the disc only able to show a couple of captions at a time, but a bigger problem is the font choice for the screen text and lyric translations. It’s small, white with thin borders and hard to make out at the best of times. Thankfully the dialogue translations use a more robust looking font that is easy to read. In This Corner of the World is actually a mostly dialogue focussed film, but the surround does offer ambience and a little space for the film to breathe, while the rare moment of strident action comes across well. I was happy with the Japanese audio, but what little I sampled of the English dub seemed of decent quality as well. 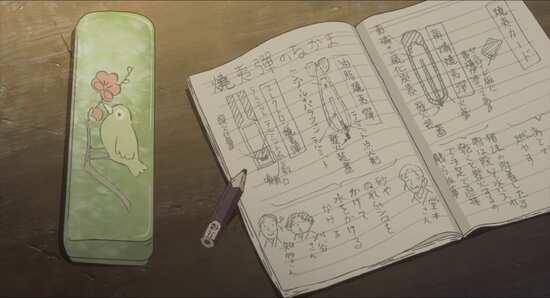 You get two discs in a BD Amaray case, one on a centrally hinged panel; the DVD and the Blu-ray in this combo pack. The sleeve art is replicated on an o-card slipcover, while the inner sleeve offers something a little different. The disc boots to an animated menu. 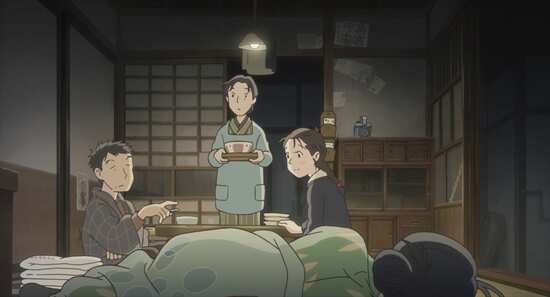 What makes In This Corner of the World stand out to me as a watchable film, despite its harsh subject matter is that it has an appealing blend of light comedy, and warm family drama with its harsh period setting. And above all, it has a sense of hopefulness about it despite all that. 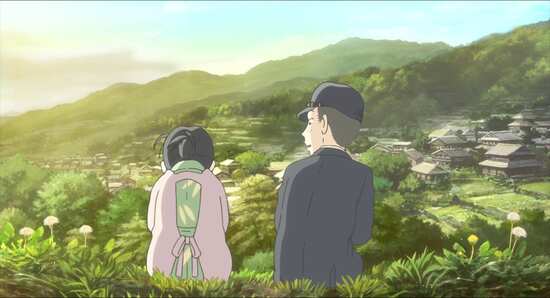 It’s a splendid, breathtaking film that offers a different, and much needed perspective to the Japanese experience of World War II, a perspective that will certainly have resonance because the experience of its characters is so universal. Both Barefoot Gen and Grave of the Fireflies, important films though they are, are primarily anti-war polemics, and relentless narratives of increasing tragedy. In This Corner of the World is a more relatable story, as it quite rightly observes that for the non-combatant civilian in wartime, life goes on, that no matter the setback, or the momentary tragedy, life will continue as normally as possible under the circumstances. 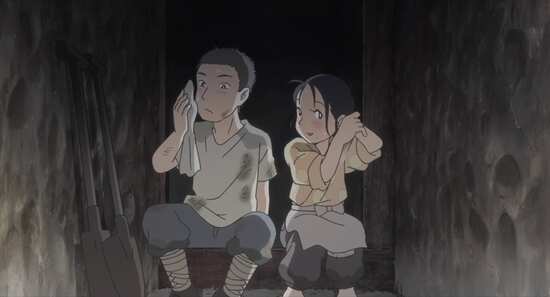 In This Corner of the World is then a slice-of-life anime, which happens to be set during the Second World War. It’s Suzu’s story, which here begins in 1933, with her as the middle child of a family that makes its living harvesting seaweed. We get brief snippets of her home life as she grows up, giving us an insight into her personality, and the joy that she has with her family. Of course the idyllic Japan of her childhood has become more militarised and imperialistic by the time she’s old enough to marry, and moving to Kure, a naval base to be with her husband and his extended family, takes her closer to the action, so to speak. 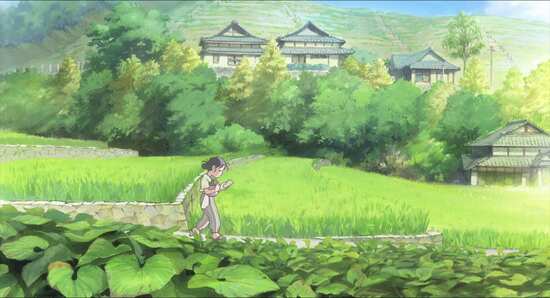 The story is still about her personal life though, getting to know her in-laws, and slowly falling in love with her husband (it was an arranged marriage), and while the sense of the war is evident (she gets in trouble one day for sketching the wrong thing), it’s still feels like everyday life. It’s everyday life with rationing, with air raid drills, with military police, but these are lesser concerns than fitting into her new family, getting on with her sister-in-law, having fun with her niece, paying the odd visit home to her parents. But then the rationing gets stricter, to the degree where the home garden is an essential rather than a supplement, to where trips to the black market become necessary. But life still goes on. Then the air raids begin, they have to dig a bomb shelter into the hill, but life goes. The bombing intensifies, but life goes on. Her husband is conscripted, but once again, life goes on. And with the war coming ever closer to Japan, inevitably personal tragedies occur too, but as is the motif of this film, life does go on. The in between moments are about keeping calm, carrying on, a blitz spirit that will be all too familiar. 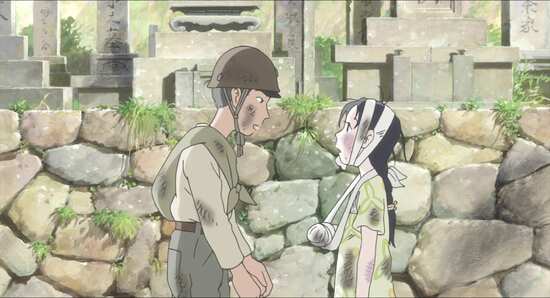 Anti-war messages in such films as these can be as obvious as the depth of personal tragedies caused by war, but In This Corner of the World has another string to its bow, that of the commonality of the experience. Anyone who’s read about the war from the British perspective, the double threat of rationing and the Blitz will see much here that is familiar. Where this film really succeeds though is in its focus on the normal, the everyday life. People still lived during the war, they took joy in their communities and their families, they still strived to improve their lots, and as always it was the minutiae of their everyday life that took precedence, not the bigger picture. The joy and hope in this film makes the tragedies stand out with even harsher contrast, and that makes this film so much more effective. But what you’re left with at the end of In This Corner of the World is the sense of hope, which in my experience with anime films of this genre is unique. The Blu-ray does offer a much better audio visual experience in my view, but Manga’s typical subtitling issues actually make the DVD a more user friendly option. It’s a good thing then that you get both in this combo pack.