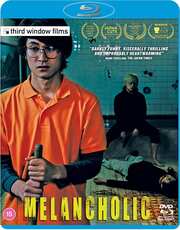 Kazuhiko may have graduated from the prestigious Tokyo University, but his life doesn’t reflect that. He hasn’t had a job that justifies his qualifications, and still lives with his parents. It’s only when he runs into Yuri, a girl he knew from high school that he becomes motivated to change his life. He wants to see more of her, and given that there’s a vacancy at the bathhouse that she frequents, that would seem like the ideal job.

The thing about a bathhouse is that it’s an ideal location to dispose of bodies. The tiles are easily washed clean of blood, and the furnace is there for unofficial cremations. When one night Kazuhiko sees something that he shouldn’t see, his job description suddenly expands to also clean up after the local yakuza. The bonus certainly helps when it comes to dating Yuri, but he keeps getting pulled deeper into this unsavoury business.

The film is presented in 2.35:1 widescreen 1080p format with DTS-HD MA 2.0 Stereo Japanese and optional English subtitles. The audio is fine, it’s not really an action movie to the extent that you’ll miss a surround track; the dialogue is clear, and the eclectic music soundtrack comes across well. The subtitles are timed accurately and are free of typos. The image is pleasant enough. Melancholic looks like a digitally shot film, and the absence of grain, and the lower contrast in darker scenes is indicative. But the colour design of the film gives it a suitably melancholic tone (pun intended), and detail levels are excellent.

The trailer lasts 1:29 and gives a little too much away. It is the International Trailer which plays to the Festival circuit, and characterises the film in a way that isn’t quite representative.

The Original Short, also called Melancholic lasts 15:00, and more than just a proof of concept or a short version of the same story, actually goes a different way with the same premise. As a concentrated hit of story, I found it to be more immediately rewarding than the feature film.

There is 32:10 of b-roll footage in Behind the Scenes.

Post Screening Q&A lasts 30:54 and has the creators and cast speak about the film in front of an audience.

It turns out that the One Cut of the Dead comparison is indeed most apt, albeit in a very specific way. Just like One Cut of the Dead, Melancholic too is an independent production that started off small and very personal and became larger. You can see the evolution from the original short to the feature film, and you really do get a sense of the movie equivalent of ‘bedroom coders’ creating a smash computer game.

I found Melancholic to be a really slow burn. The film lasts almost two hours, and while it had my attention for that run time, it didn’t have my appreciation, not until its conclusion. Given the subject matter, that of organised crime and a bath house become murder factory, I quickly developed expectations as to which way the story would go, and despite its languid pace and unexpected genre blend, it wasn’t until the end of the movie, which quite pleasantly surprised me, that I appreciated the experience of watching Melancholic.

Melancholic somehow combines a violent criminal thriller with a dark comedy, and a heartfelt romance, and it makes it work. Kazuhiko is the melancholic guy of the title, a young man who just hasn’t been able to fit in, despite graduating from university. He hasn’t found work, is introspective and soft spoken, the kind of guy who would be a wallflower at any party. It’s just that at his high school reunion, he manages to be a wallflower together with Yuri, and he makes a connection which finally inspires him to do something with his life.

Getting a job at a bathhouse seems like a good first step; a customer facing role and a happy-go-lucky co-worker offers opportunities to interact and get his foot in the door with the world so to speak. But his new found curiosity gets him into trouble when he witnesses the bathhouse’s true purpose, that of disposing of the people that have offended the local yakuza. He was initially hired to work the bathhouse during the day, but now he knows the secret, he has to be all in, or all out the terminal way. He starts off by cleaning up after the yakuza executioners (who also have day jobs at the bathhouse). The murders are unflinching and brutal, but are also matter of fact, and not treated as movie voyeurism.

More important is the process of cleaning up, and Kazuhiko quite quickly becomes inured to the brutality, and quite naturally his conversations with his co-workers turn to the nature of their true work. Just what motivates contract killers, what do they feel about their job? It’s odd to say it, but there were moments in this film that felt like the Zen of Murder. With Kazuhiko getting deeper and deeper in the sordid business, while at the same time living his happy family life with his parents, and spending more time with his new girlfriend, eventually the shoe drops, and he’s required to take the promotion from mere cleaner to something more, which motivates the film’s climax.

You really do have to suspend a whole lot of disbelief for Melancholic to work. This is apparently a world without a police force, and it’s also a world where a conveyer belt of corpses need to be disposed of on a nightly basis with no one asking questions as to why the local population is dropping so precipitously. But once you put these questions to one side, there is something really quite appealing and reflective about the languid pace with which Melancholic unfolds. It’s the most placid crime thriller I have seen.