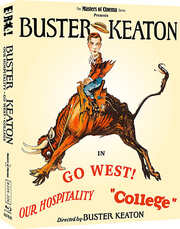 Our Hospitality (1923) – Often cited as one of his most significant films—as well as one of his funniest—1923’s Our Hospitality, which Keaton co-directed with John G. Blystone, is his take on the notorious feud between the Hatfield and McCoy clans (here renamed the Canfields and the McKays). Keaton is luckless William McKay, who must journey down South to view his lacklustre inheritance, only to be seduced along the way by one of the Canfields, Virginia, who lures him to her family’s house so that the men of the clan can shoot him down. But William knows that the Canfield men won’t kill him as long as he’s in their house, so he endeavours to stay put there, against all obstacles. With its attention to 19th-century period detail and emphasis on integrating the gags into the storyline, Our Hospitality was not just a breakthrough in Keaton’s career, but it was also noted even during its release as an advancement in the medium, with Variety proclaiming, “It marks a step forward in the production of picture comedies.” From a 2K restoration

Go West (1925) – Keaton is at his most stone-faced as the memorably named “Friendless” in Go West, an irresistible blend of deadpan darkness and spectacular comic set-pieces. Friendless abandons city life to ride the rails to an Arizona ranch, where his ineptitude at almost everything only makes his nickname even more accurate. But when his one beloved companion, a cow named Brown Eyes, seems to be headed to a slaughterhouse fate, Friendless intervenes, and the resulting cattle stampede through the streets of Los Angeles is one of Keaton’s most understandably famous and acclaimed sequences. From a 4K restoration

College (1927) Keaton follows up The General with a higher education comedy that seems to take a cue from Harold Lloyd’s The Freshman (1925). Keaton is bookworm Ronald, whose high school girl Mary ditches him for someone with the athletic prowess that Ronald lacks. Determined to win her back, Ronald enters college with an eye on sports, but two left feet. From a 2K restoration

•Our Hospitality: Presented in 1080p from a 2K restoration

•Go West: Presented in 1080p from a 4K restoration

•College: Presented in 1080p from a 2K restoration

•The Railrodder [1965, 24 mins]: produced by the National Film Board of Canada and starring Buster Keaton in one of his final film roles

•PLUS: A 60-PAGE perfect bound collector’s book featuring new writing by Philip Kemp; essays on all three films by Imogen Sara Smith; a piece by John Bengtson on the filming locations of Our Hospitality; Gerald Potterton’s original treatment for The Railrodder; and an appreciation of Keaton and The Railrodder by writer and silent cinema aficionado Chris Seguin