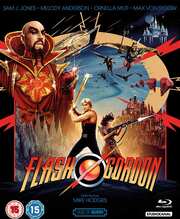 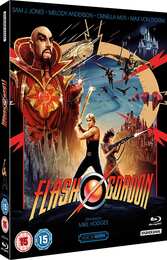 Would you believe that Flash Gordon was actually my introduction to home cinema? Long before my family owned a VHS machine, this was the first film I re-watched thanks to a friend’s video. He introduced me to this new technology with his copy of Flash Gordon on tape, and I so fell in love with the film, that I’d actually visit his house just to watch it again. It’s a good thing he was fan of it, as I wound up watching it probably twenty times before I was ten.

From VHS to UHD, as for its 40th anniversary release, Studiocanal in the UK (and Arrow Video for the US), have gone back to the film and commissioned a new 4k scan and restoration (some of the hawkmen’s more obvious wires have been removed). I’ve occasionally wavered over the old 30th Universal Blu-ray but have always demurred, as it doesn’t look too great. But once this Studiocanal release was announced, I was all over the 2-disc Blu-ray release. I’m not UHD ready at this time, while the 5-disc Collector’s Edition that contains it offers more bang for my buck than I’d ever really get around to watching.

Flash Gordon may be a renowned football star, but he’s called on to save the world once Ming the Merciless unleashes havoc. Professor Hans Zarkoff, pariah of the scientific community and lunatic doomsayer, kidnaps Flash and travel agent Dale Arden and takes them aboard his homemade rocket to find the source of the attack. Zarkoff isn’t as crazy as he looks, as the rocket takes them to the worlds of Mongo, where Ming and his minions use Earth as a plaything. Ming rules over the world of Mongo with an iron fist, pitting his vassal states against each other. Flash and his friends will have to get these warring worlds to work together against Ming if they have any hope of saving the Earth.

This might be the latest bugbear of the low-budget videophile. Up till now, when a movie got a 4k scan, the Blu-ray master would be struck from that scan, the DVD, and the UHD as well; the UHD getting the HDR treatment too. Now it seems that companies are going from the 4k scan straight to the UHD, and any Blu-ray is a downscale of that. The whole HDR processing means that apparently colours aren’t quite right on the Blu-ray. Having seen glimpses of Studiocanal’s new release of Bill and Ted’s Excellent Adventure, and having watched Flash Gordon, I can certainly attest to that feeling. These colours are vibrant, vivid, and pop off the screen in such a way that they can distract. You won’t have seen reds this red before. Fortunately both films are comic book movies, and you can forgive the sparkle, but it might be worth bearing in mind when considering buying this movie; that’s it’s really optimised for the UHD disc.

But it’s still worth the double dip if you have the old Universal disc. The 2.35:1 widescreen 1080p transfer is excellent. The detail levels are wonderful; as mentioned this film is a colour explosion, which really does benefit the substantial Mongo part of the film a lot more than the Earthbound opening sequence. There’s no issue with compression or the like, and the transfer does full justice to the wonderful sets and the amazing costumes. The only tweak to the effects might be the aforementioned wire removal, but even with the occasional visible matte lines, and the translucent composites the 1980 effects work still manages to impress.

You have the choice between DTS-HD MA 5.1 Surround English, and DTS-HD MA 2.0 Stereo English, German and French with subtitles in these languages. The disc defaults to English stereo and that’s what I stuck with. I was happy with the experience, the Prologic gave the audio a bit more separation, but the sound was crisp, the dialogue clear, the action represented well, and of course a Queen soundtrack put a grin on my face. I gave the 5.1 surround a try and it’s not as crisp. It’s just a little muddier, and the placement of effects in the soundstage can be unsubtle. But the LFE really adds a dimension beyond the stereo. When the hot hail starts to hit, you can really feel it.

You get two discs on each inner face of a BD Amaray, wrapped in an o-card slipcover.

The feature disc offers the choice between English, French and German menus on insertion, before booting to a silent animated menu. Apparently most of the extras overlap with, but don’t match the US Arrow release, so if you can spin Region A, you might consider double-dipping for those fringe features.

The film gets two audio commentaries, both well worth listening to, one from director Mike Hodges and one from Brian Blessed (Vultan). Both commentaries are subtitled if you require them.

Lost in Space: Nicolas Roeg’s Flash Gordon lasts 27:50. Nicolas Roeg was the original director for Flash Gordon before being replaced by Mike Hodges, and this featurette looks at what his vision of the comic book hero might have been.

Behind the Scenes of Flash Gordon is the original 1980 making of documentary which lasts 14:27.

Disc 2 has the same language options, and it boots to a static menu, albeit this time there is audio. Here you’ll find the following extras. Incidentally Disc 2 has the 15 rating for Brian Blessed’s mouth. The film is still rated PG.

Flash Gordon Episode 24: The Survival Game/Gremlin’s Finest Hour. I used to watch this Filmation cartoon series as a kid, and having seen it on this disc, I understand why I put out of my memory. This lasts 24:31.

Bob Lindenmayer on Deleted and Alternate Scenes (2:12). This is just a talking heads interview, no actual footage to look at.

In the extras, Brian Blessed speaks of the purity of the Flash Gordon character and Sam Jones’ portrayal, and that is a primary take-away from this feature film iteration of Flash Gordon. This film comes from the short lived era of superhero comic book adaptations which had yet to embrace the darkness and complexities introduced by Tim Burton’s Batman. It may seem a bit of a reach to compare Flash Gordon to Superman, but there is a guilelessness and honesty that both characters share, which with lesser performances could be described as a lack of dimension, but works really well here. Flash Gordon is an all-American hero back from when the United States of America was still an aspiration for many around the world.

Flash Gordon works because it’s so much fun. The characters are vivid and larger than life, but played perfectly straight. That allows the wit, and occasionally subversive nature of the script to come through. The director may be winking at the audience, but the actors and the characters never are. In that respect, Flash Gordon has more in common with the Batman serial of the sixties than Superman. But then you have the wonderful production design, and the astounding colour palette, for which HDR was no doubt invented, and there is a reality to the sets and even the special effects that charms, no matter how quaint they are, in a way that would be utterly lost if this was given a modern CGI overhaul.

It’s classic, good guys versus bad guys fare, an adventure story in a fantastic world, with three plucky humans going up against the monstrous Ming the Merciless in an effort to save the world. It’s also worth noting that Dale Arden is no mere damsel in distress, and even in 1980 she was more than capable of picking up a laser gun and taking care of herself, while Zarkoff proves the resilience and indomitability of the human spirit and intellect, all while Flash is off buckling swashes and uniting the rebels against Ming. Much is made of Brian Blessed’s role in the film as the hawkman Vultan. He’s never been more Brian Blessed than in this film, and it’s stuck with him for the last forty years, but I love Timothy Dalton’s performance as Barin, a frustrated Errol Flynn who bites his way through profanity. Max von Sydow on the other hand conveys such elegant malice as Ming that he’s utterly memorable as a screen villain. And on top of all that you have Queen’s peerless soundtrack.

I never saw the original Universal Blu-ray disc for Flash Gordon, but the fact that I avoided it all these years, yet made a week one purchase of this Studiocanal release speaks volumes as to my wariness. On this new release, Flash Gordon looks fantastic, a great transfer with excellent detail and rich, vivid, living colour. If there might be a criticism, it’s that there may be just a little too much colour, an artefact of this re-master being optimised for HDR 4k and not the Blu-ray, but it’s a small nit to pick given the alternative. That you get the original stereo mix as well as the 5.1 audio is also a point in its favour. The rest is presentation, and that die-hard Flash Gordon fans will no doubt be getting the Studiocanal release and the US Arrow release to ensure that they get all the extra features.