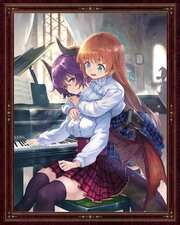 Sometimes a title shows up which just raises an eyebrow and Mysteria Friends is one such title. That it’s apparently based on a mobile phone game is something I’ve ignored. I’ve long had this preconception with stories based on games that is unfavourable, but having seen quite a few anime avoid the Super Mario and Mortal Kombat pitfalls, I try and blank out that bit on the proverbial spec sheet. I did pay attention to the fact that apparently Mysteria Friends a.k.a. Manaria Friends is set in the same story universe as Rage of Bahamut: Genesis and Virgin Soul. Rage of Bahamut: Genesis was released here by All the Anime, and it was a surprisingly high quality fantasy show. 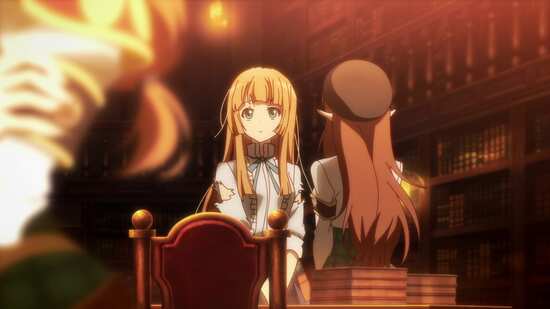 But my eyebrow was elevated for another reason; the price. For an RRP of £49.99 you get one disc, with a 40 page artbook and 4 art cards. But there are just 10 episodes on the disc, and what’s more, these are episodes which are just 14 minutes long each (15 minutes including the translated credit scroll). That means a total runtime of around 150 minutes. The average 12 episode anime series will be twice as long at 300 minutes. Quantitatively, you’re paying more than usual to get half as much content. 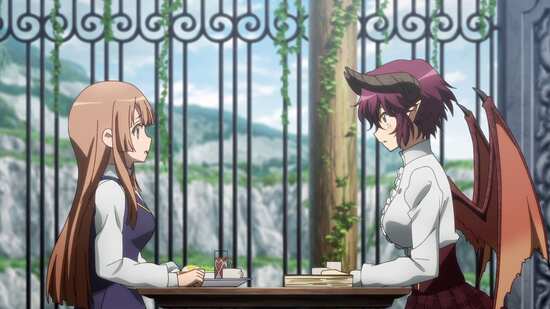 Then again, I paid a lot more than this when it came to something like Sound Euphonium. Qualitatively, Mysteria Friends might do enough to more than justify its price tag, and you might just want it enough to spend. 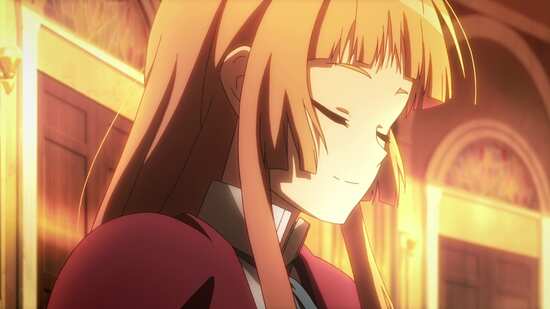 We’re in Hogwarts territory, with Mysteria Academy an institution that teaches magic to a student body comprised of all manner of beings, men, gods and demons, creating a peaceful environment for races that are usually antagonistic to each other. Even still, you wouldn’t expect a human princess to get along with a half dragon, but sure enough, Anne is best friends with the half-dragon named Grea. Mysteria Friends follows their everyday lives at this fantastic school. 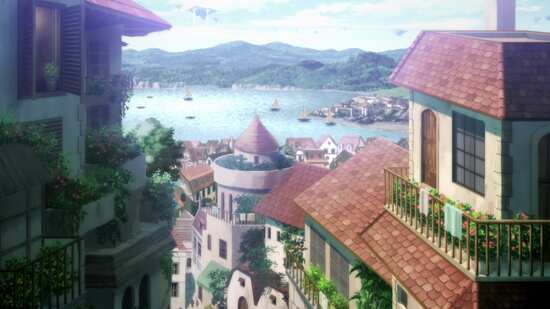 10 episodes are presented on one disc from MVM. 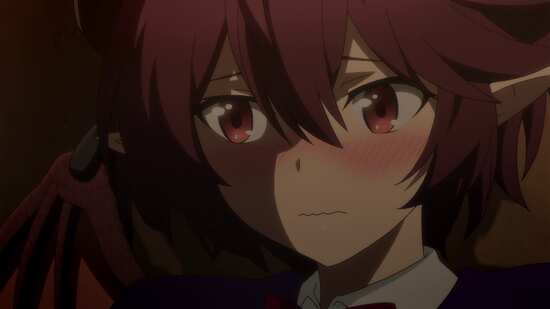 Mysteria Friends gets a 1.78:1 widescreen 1080p transfer on this disc, and given the amount of content it’s really quite a peach of a transfer. The image is clear and sharp, the animation is smooth and there are no issues with compression or banding. That’s all to the good as the look of this show is spectacular, maybe even more so than Rage of Bahamut Genesis, which itself was epically cinematic. The character designs are detailed and charming, and the character animation is really fluid and well observed. The artwork is sublime, richly detailed, warm and magical; the backgrounds really are spectacular in this show, a real selling point. 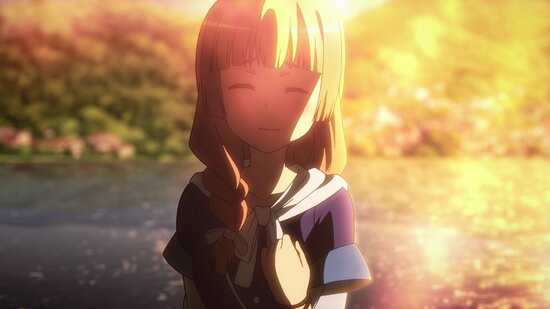 You get the choice between DTS-HD MA 2.0 English and Japanese with subtitles and signs locked during playback. The audio is fine, I was happy with the Japanese, and the actors are suited to their roles, bringing the right level of cuteness and emotion to the characters. The show gets some nice, suitable mellow music. The subtitles are accurately timed and are free of typos. 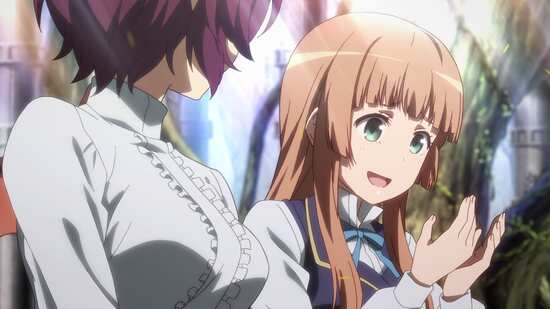 The disc boots to a static menu. Note that you’ll only see five episodes listed on the page. There is a down arrow at the bottom of the screen which is actually a little too discreet. I missed it the first time around and had a panic looking for a non-existent disc 2. But highlight and use that down arrow button to get episodes 6-10. The episodes have translated credit scrolls at the end. 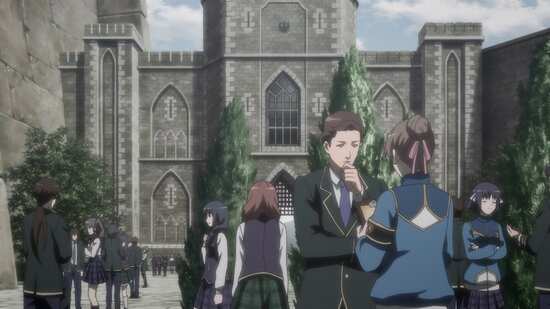 In terms of extras, what you’ll find on disc are the Best Shots – Still Frame Gallery which is presented as a 5:54 slideshow.

There are also trailers for Grimms Notes – The Animation, Release the Spyce, Love, Chunibyo and Other Delusions, and To Loveru Season 1.

I haven’t seen the physical extras that accompany this release to comment. 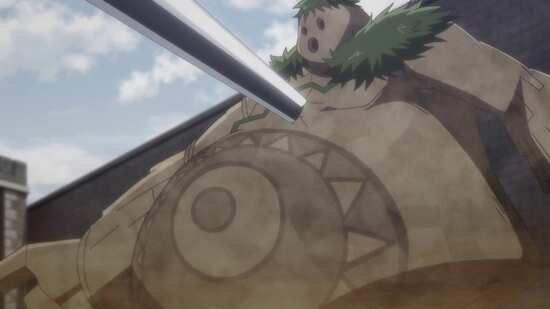 This is going to be a hard one to review or more importantly recommend, as you can’t get away from that £49.99 RRP and the fact that there’s just 2½ hours content on one disc. The show is still up at Crunchyroll at the time of writing, and perhaps the most important thing is that you can try before you buy. After all with this much content, and this kind of Collector’s Edition, you really do have to be in love with the show before you commit to buying it. With Mysteria Friends being a slice-of-life show first and foremost, it’s really down to the connection that the viewer makes with the characters that define how they see the show. I love Non Non Biyori and K-On in a way that will loosen my wallet a whole lot faster than Is the Order a Rabbit? and Hidamari Sketch, but there are fans who will experience the exact opposite. 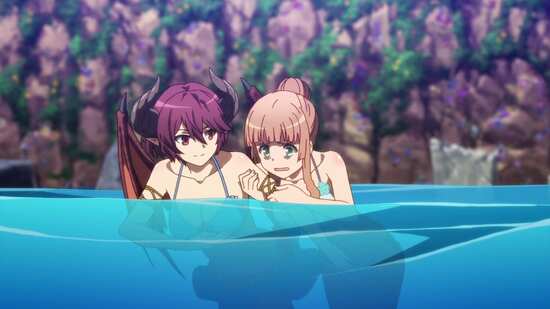 For me, Mysteria Friends may just be the most beautiful slice of life show that I’ve ever watched, but it’s not my favourite. I couldn’t quite connect with the characters deeply enough to care for the show. It’s a friendship, a love story between Anne and Grea, the princess and the half-dragon, and for love stories to really work, you need to invest fully in the characters. I never felt the need to dab away a tear with a tissue, I wasn’t hanging off every word, but I was certainly happy enough to spend 15 odd minutes in this world, and let it be the soothing background noise to my soul, however briefly. In other words it’s another slice of life show that I enjoyed, like so many others. 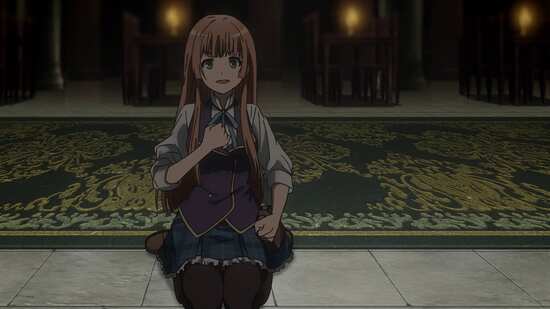 You have this fantastical world, a magical academy not unlike Hogwarts, appealing students and likeable teachers, yet all of this narrative is just background to the friendship between Anne and Grea. Perhaps the most dramatic of the episodes is the opening one, which introduces all of this, and gives the characters a tangible, magical problem to deal with, but thereafter these sort of narrative issues become background to whichever emotional tribulation Anne and Grea may be facing as their friendship deepens towards love over the course of these episodes. 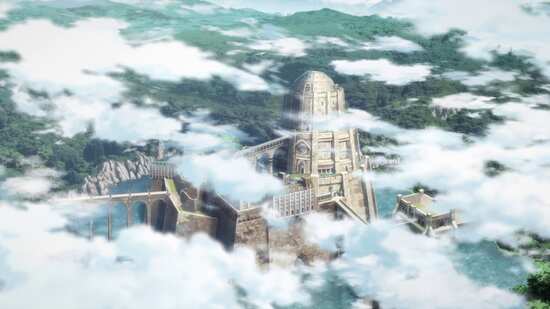 There’s very little I can add to that. Mysteria Friends is an absolutely beautiful looking show; it’s delightful, charming and heart-warming in the way that it entertains and helps you relax. But, I also found it quite forgettable, and ephemeral. It’s not a show that will stay with me for long, and I suspect within a month, I’ll have forgotten that I ever watched it. That might be a positive, as I could be delighted anew the next time I ‘discover’ it, but once again, I must say that you really should make sure that you’re a die-hard fan of the show before you buy. This isn’t the kind of money I’d spend on a blind purchase.