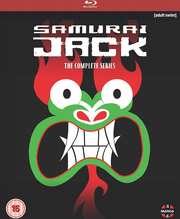 It’s odd that this show passed me by. It ran for four years from 2001, back when I still had the time to watch broadcast TV, although its final season was made more recently in 2017 to give the story a conclusion. It’s in anime style, even if it is a US show, and it’s made by Genndy Tartakovsky, best known for the Star Wars Clone Wars animation and The Powerpuff Girls. That’s the kind of thing that you take note of. But then again, as far as I can tell, the show was never released in the UK on DVD. Admittedly I was a bit of an ‘anime can only come from Japan’ snob back in the day, and even if I wasn’t, Samurai Jack’s thunder was completely stolen in 2007 by Afro Samurai. With Samuel L. Jackson on board, that became the Hollywood Samurai animation to own. I think this might just be the UK debut of Samurai Jack, and it’s a totally new adventure for me. Be aware that while this is a Blu-ray release, Samurai Jack’s first four seasons were animated in SD for NTSC television broadcast. The first four discs will be upscaled 4:3 presentations; only season 5 is in native HD. 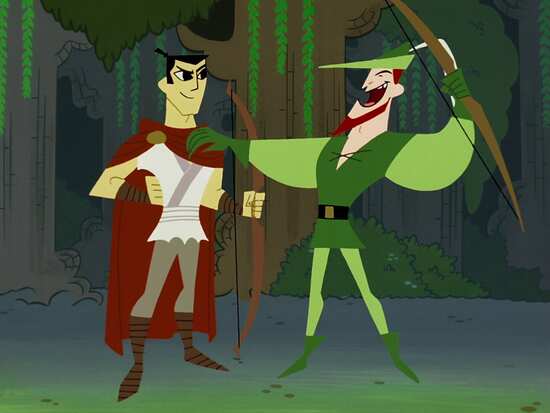 The Emperor often told the tale of how the demon Aku was defeated with an enchanted sword, bringing a golden age of peace and prosperity to the land. But on the day of the eclipse, Aku was freed from his prison and returned to wreak vengeance. The country fell under his dark power, and the Emperor deposed. His young son managed to escape with his mother who also took the enchanted sword. They separated, with the boy travelling the world, learning of other cultures and gaining the skills he needed to defeat Aku once more. By the time he returned home, the boy had become a man, but when he faced Aku and brought him to the brink of defeat, Aku in a last gasp cast a spell that sent the young samurai hurtling towards a distant future. Now Jack, as he’s named by the locals is in a world filled with strange machines and aliens, ruled over by Aku. Jack will need to find his way back to his own time to stop this dread future from ever becoming a reality. 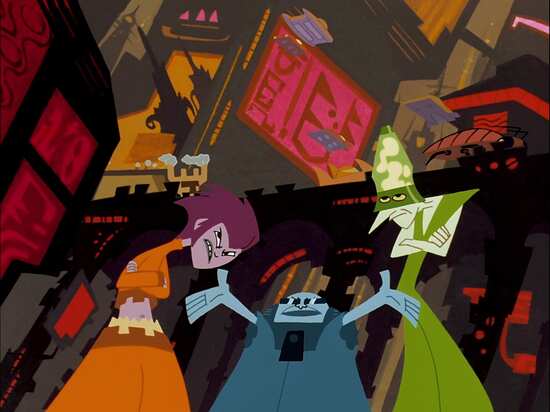 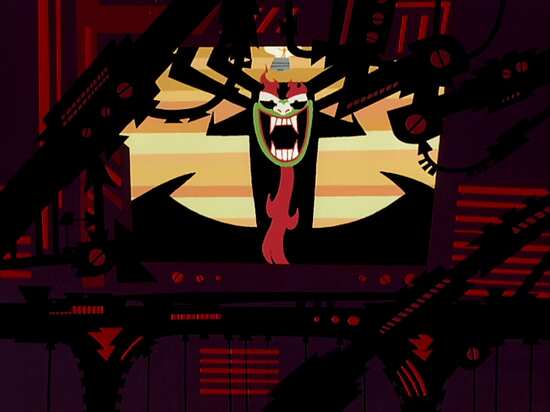 From 2001-2004, the first four seasons of Samurai Jack were transmitted in SD and in 4:3 format. For the Blu-ray release, the studio hasn’t simply gone back to the broadcast tapes and scaled those up, they’ve actually re-mastered the original animation. That does make for crisp and well defined outlines, and smooth animation, but given the source material, it is still effectively an upscale. Samurai Jack is a visual feast, really delivering in terms of action, and a cinematic feel that is heavily versed in spaghetti western and samurai movie tropes. There’s a lot of anime influence as well, and you can see that in the way the animation will use stillness to contrast with the frenetic fight sequences. You also get an editorial dynamism in the way the show will switch aspects at the drop of a hat, all within that 4:3 frame. You suddenly get widescreen shots, little letterbox cut-outs, all mixed with spectacular use of light and shadow. Alas, the dramatic intent of the direction isn’t always matched by the character art, which can be a little too simplistic to convey the subtlety of emotion that you get in the usual spaghetti western extreme close-ups. 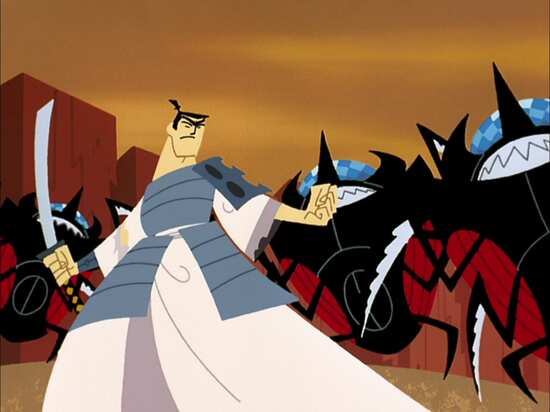 In 2017, when Samurai Jack returned to conclude its story in the fifth season, times had changed, and the animation on the fifth disc reflects that, with a 1.78:1 widescreen 1080p transfer of a native HD production. The quality of the animation reflects the time that has passed, and the action sequences are even more impressive, while the aspect ratio is just as variable as ever, the direction just as cinematic, although given the widescreen format, it’s even more effective. 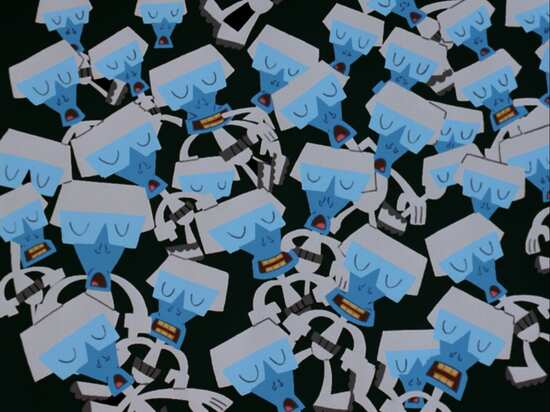 Discs 1-4 get Dolby Digital 2.0 Stereo English tracks, while disc 5 gets a Dolby Digital 5.1 Surround track, all with HOH English subtitles. The audio is fine throughout, but when it comes to dialogue, it’s really a minimalist show, with a lot more attention given to the music and the action. Even with the stereo, the placement of effects really adds to the atmosphere of the show, and in season 5, you get a whole added dimension to the audio. 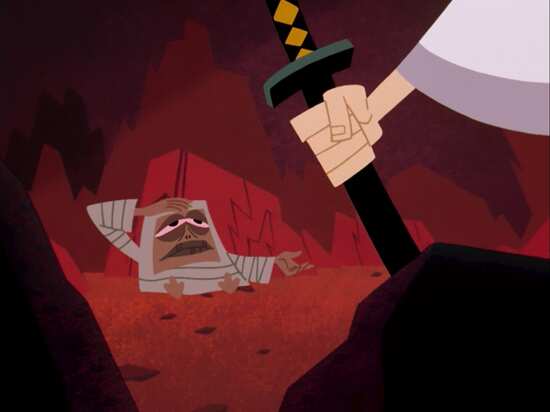 The discs boot to static menus, and rare for a Manga release, the Blu-ray player will remember the last position when discs 1-4 are ejected, and will auto resume when you put the discs back in. Alas it’s back to normal amnesia with disc 5.

Disc 1 has a commentary on episode 7 of Season 1 with creator Genndy Tartakovsky and Storyboard Artist Bryan Andrews. 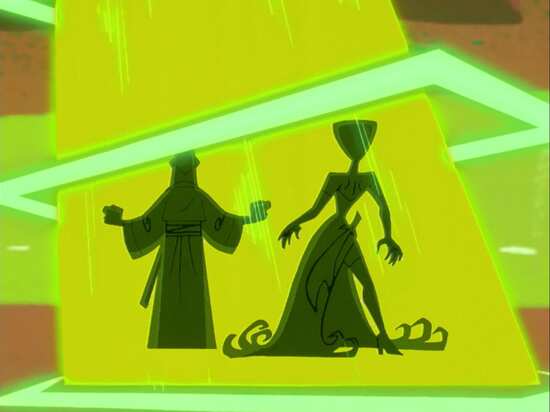 The Making of Samurai Jack lasts 7:10 and is in SD. The creator and artists are interviewed.

There is a Creator Commentary on episode 15 with Genndy Tartakovsky, Bryan Andrews, and Scott Wells. 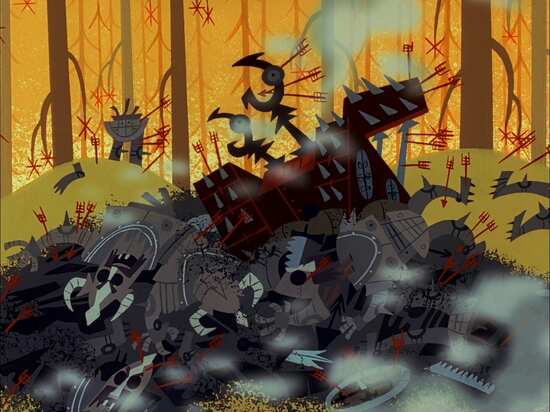 Disc 5 has quite a bit more than I expected, beginning with The Evolution of Jack! It’s a 13:46 making of with interviews with the cast and crew, focusing on the final season.

Then there are the Pitch Movies, which I took to be trailers at first glance. Instead they are episode storyboards, with Genndy Tartakovsky narrating the action, doing the voices and providing the sound effects, as mentioned in the making of. There are five in total. 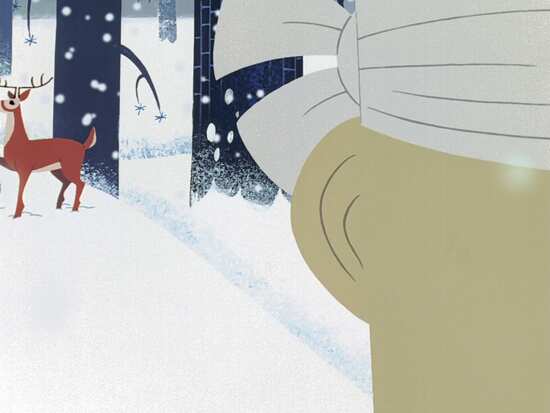 It seems like a lot of extra features on these discs, but apparently the original DVD releases of Samurai Jack actually have more in the way of extras, especially for Season 4, which is barebones on the Blu-ray. 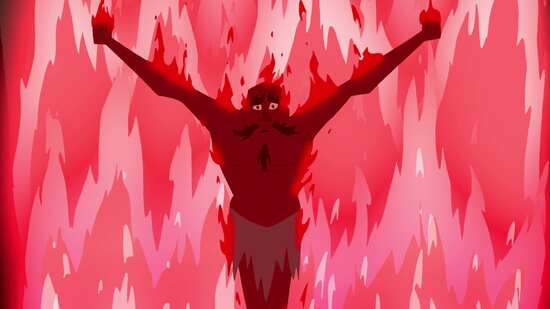 Well, that was a cure for insomnia... or so I initially thought. Seasons 1-3 of Samurai Jack were an absolute chore to watch, and took me four times as long as I had initially anticipated. Dull, repetitive and completely forgettable, I was prepared to rip Samurai Jack a new one, the biggest pile of hyperbole to ever cross my path. Then Season 5 came along and completely changed my mind, but I’ll get to that in due course. 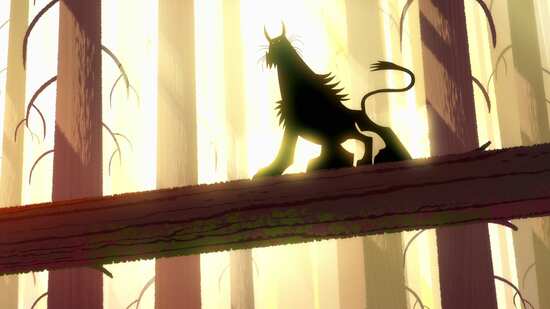 Made in the early 2000s, Samurai Jack feels like a TV show twenty or thirty years older, a Saturday morning kids cartoon. Every episode has to stand alone, and able to be broadcast out of order without causing confusion. So after Samurai Jack gets sent into the future by Aku, his sole purpose is to find a way back to his own time. And this being a kids’ TV show, no blood allowed, so Jack’s sword can only cut through robots.

There aren’t too many episode archetypes. Jack wanders the future Earth, helping people he comes across, or dodging Aku’s assassins, or there might be an episode where he locates a time portal, only for the chance to get back home being snatched away from him right before the end credits. There is the occasional episode where he goes head to head against Aku, but these are rarer, occasional gifts to keep you invested. Even rarer are those episodes that look at the past, back when baby Jack was still in ancient Japan. 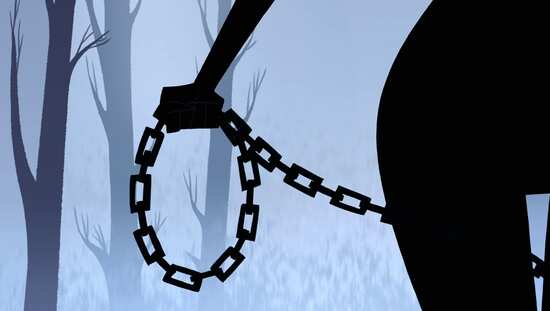 The big problem at this point is the characterisation, or lack thereof. Aku is evil most certainly, but through the sheer cliché of bad guys in Hollywood, he at least is interesting, gets some choice dialogue. Jack on the other hand is so bland that he may as well be a blank slate, unerringly good, and ascetic to the point of tedious. It’s rare to see him break from his monotonous equanimity other than to hear a battle cry. You get to the point where you hope that the supporting cast for a particular episode will supply some personality. Thankfully this does happen on more than one occasion, and by the time the Scot is introduced, you wind up looking forward to his regular appearances for the comic value. 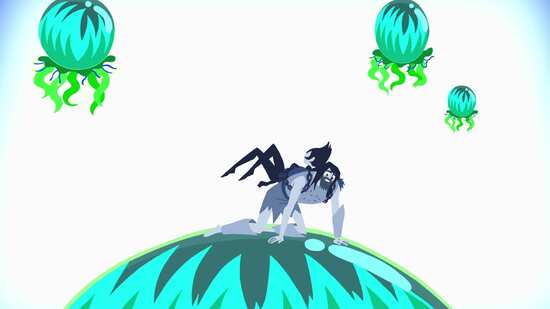 For most of the first three seasons, Samurai Jack feels like a tech demo to me. A repetitive story and thin characters coupled with awesome animation and cinematic direction. 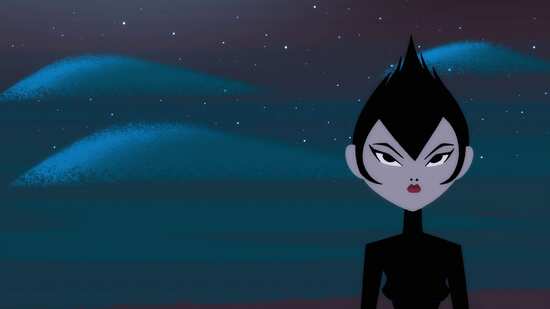 Then Season 4 comes along, and something changes. Samurai Jack starts to get referential, and indeed self-referential. I didn’t sleep through many Season 4 episodes the way I did before, and actually enjoyed it when Samurai Jack started to acknowledge and reference some of the flaws and clichés of the first three years. There was even a story where Jack got amnesia, and the Scot showed up trying to help him get his memory back, only Jack had finally developed a personality! The creators really started to have fun with the show, and it was a rare episode in season 4 that didn’t have at least one Star Wars reference (presaging the Clone Wars cartoons no doubt). 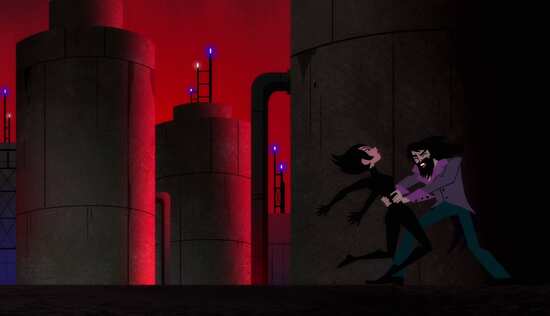 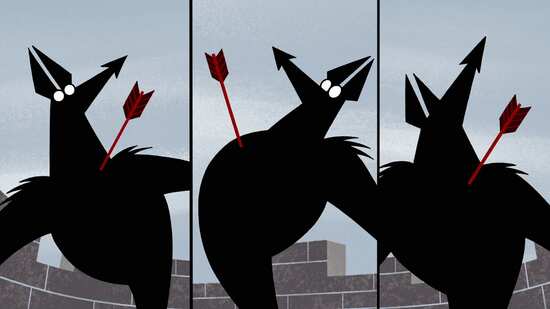 Genndy Tartakovsky came back to Samurai Jack after 12 years for the final season, and that is immediately apparent in the HD visuals and the contemporary looking animation. But instead of picking up where he left off, the story assumes time, and indeed episodes have passed since episode 52 at the end of season 4. Season 5 begins with episode 92. The show had moved to Adult Swim and no longer needed to satisfy child friendly broadcast requirements, and that meant a bit of blood, and darker themes. What’s more the show apparently assumes that it would be the same audience that left Season 4 now coming back, and they had grown up in 12 years, so Samurai Jack had grown up as well. No longer episodic, the story would conclude in a 10 episode mini-series, just one story from beginning to end. 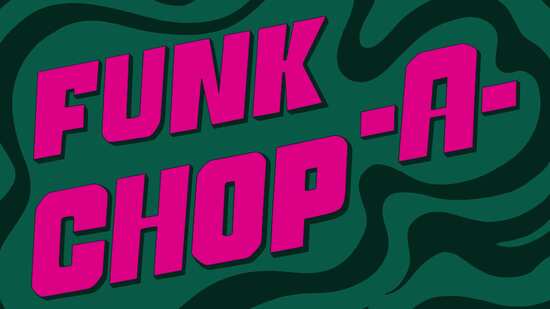 50 years had passed, Aku had destroyed the last time portal, and Jack wanders the land, a man without purpose, having lost his magic sword, and haunted by his failure to return home and defeat Aku in the past. When we first reunite with him, he’s gone Mad Max, wearing armour, riding a motorbike, and gunning down robots with increasingly large calibre automatic weapons. And Aku is bored, not even bothering with the samurai anymore. 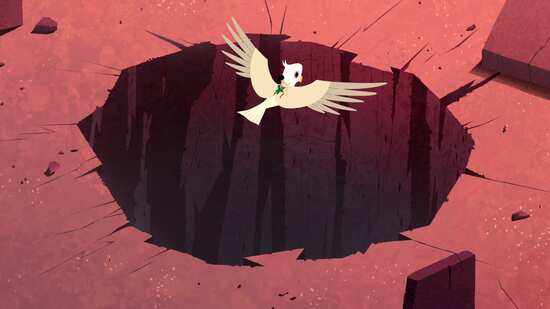 But some time previously, a sisterhood of Aku worshippers raised their children as Daughters of Aku, assassins trained for just one purpose, to kill the samurai. They’ve just come of age, and embark on their mission, and for the first time Samurai Jack has to fight against humans, not robots. When he’s forced to kill one of the assassins, it sends him into a crisis.

Season 5 of Samurai Jack is fantastic. It’s got the great action, it’s got a great sense of humour, but the characters are so much richer, they’re actually developed and have story arcs. There’s romance as well as all the introspective doom and gloom, and the show manages to pay homage to the four seasons of episodes that came before. 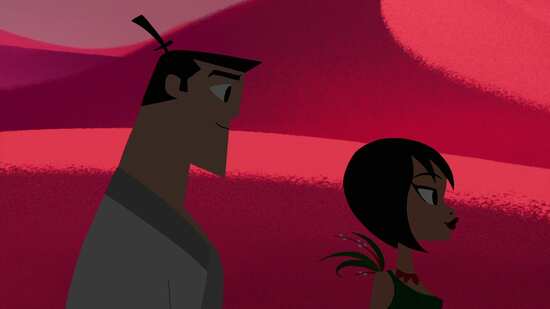 Here’s the thing though. Season 5 of Samurai Jack won’t work as well without the history of the first four seasons, and while I must admit that I now do want to go back and watch those 52 episodes again in the context of the story’s conclusion, I am under no illusion that they will magically turn into narrative and character brilliance. If you loved Samurai Jack when you were growing up, then this collection will deliver all the nostalgia you need, but for newcomers to the show like me, you might want to give a few early episodes a try by other means before investing in the collection.