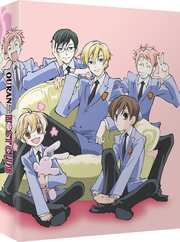 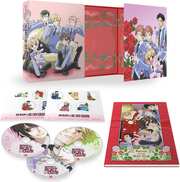 The message here is simple. If you bought the UK DVD release of Ouran High School Host Club back in 2009 from Manga Entertainment, you must get the Blu-ray. Manga have a history of being unable to match other distributors when authoring their own releases, and Ouran was the worst. The usual NTSC-PAL standards conversion issues were there, a lack of proper chaptering, the subtitling was substandard, the extra features were stripped out, and worse, the whole thing was in the wrong aspect ratio, anamorphic when it should have been 4:3. It was a travesty of a release for a show as good as Ouran High School Host Club. That doesn’t explain why I’m now reviewing the Blu-ray, as I saw the Manga release and imported Funimation’s US DVD releases instead, and given the 2006 vintage, any Blu-ray will be an upscale at best. The bottom line is that the Blu-ray was dirt cheap in one of those end-of-year sales that Anime Limited have. The good news is that even if that is sold out, the US Blu-ray discs are Region B compatible, so there’s still no reason not to upgrade if you still have the Manga DVDs. 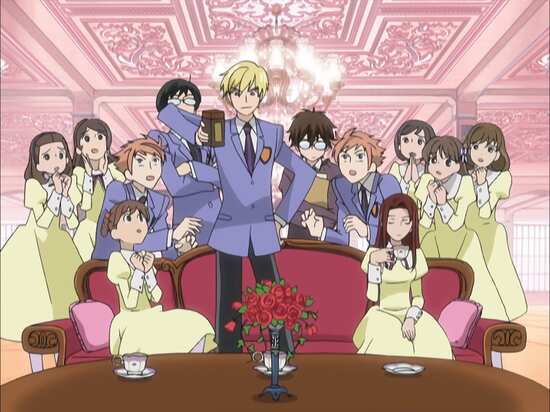 The Ouran Academy is a prestigious, exclusive school for the children of the rich, the elite, and the powerful. Those who attend expect the fineries, the better things in life, and the school delivers in its facilities and its grand architecture. There are scholarships of course, which is how Haruhi Fujioka becomes a student. Haruhi’s poor, can’t even afford the uniform, likes to remain understated and inconspicuous behind thick spectacles, in grungy clothes, and behind a stack of books. It’s this desire for anonymity that led Haruhi to a quiet place to study one day. However, Music Room 3 turned out to be the venue for the Ouran Host Club. 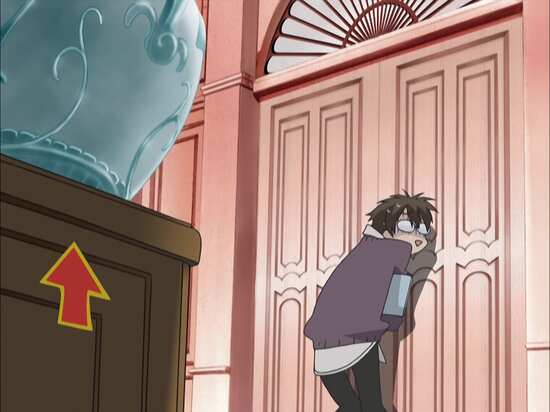 When you’re a child of the rich, and have an inheritance to look forward to, education becomes less of a priority, and students have a lot of time on their hands. The Host Club exists to entertain Ouran Academy’s female students, and the boys who are members pride themselves on their elegance, charm, and attractive qualities. They exist to make girls feel loved. There’s something for everyone in this club, the epitome of elegance is their leader, the blond Tamaki Suou, while for utter cuteness there is the childlike Mitsukuni ‘Honey’ Haninozuka. Takashi Morinozuka makes up the strong and silent demographic, while twins Hikaru and Kaoru Hitachiin play with scandal and taboo to titillate the girls. Kyoya Ootori handles club finances, which is where the 8 million yen fine comes in. 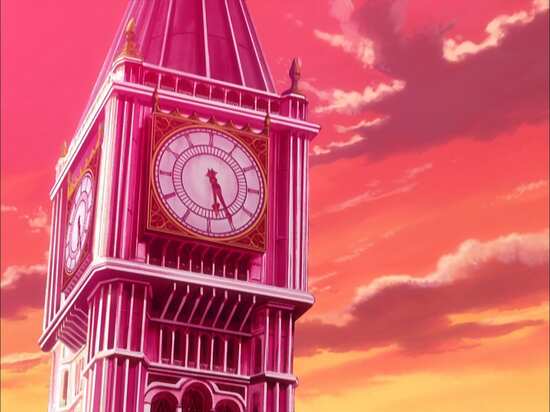 That’s the fine that is incurred when, while trying to escape from this strange new world, Haruhi knocks over and smashes an antique vase. Haruhi is adopted as the club’s lapdog, working to repay the debt, but when Tamaki gets a glimpse at the gorgeous eyes that are hidden behind the spectacles, he realises that Haruhi will drive the girls wild, and that the Host Club have their newest member. The only problem is that Haruhi’s a girl. 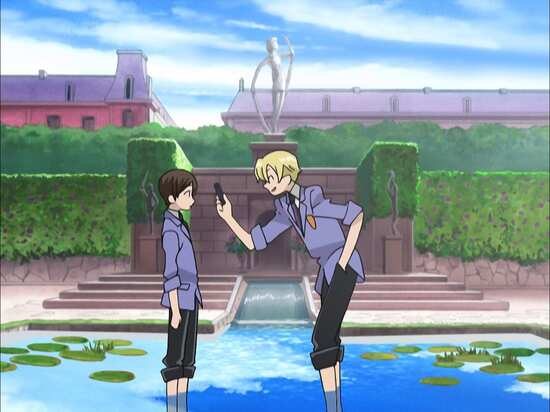 The 26 episodes of Ouran High School Host Club are presented across three Blu-ray discs from All the Anime.

1. Starting Today You Are a Host!
2. The Job of a High School Host!
3. Beware The Physical Exam!
4. Attack of the Lady Manager!
5. The Twins Fight!
6. The Grade School Host is the Naughty Type!
7. Jungle Pool SOS!
8. The Sun, the Sea, and the Host Club!
9. A Challenge From Lobelia Girls’ Academy! 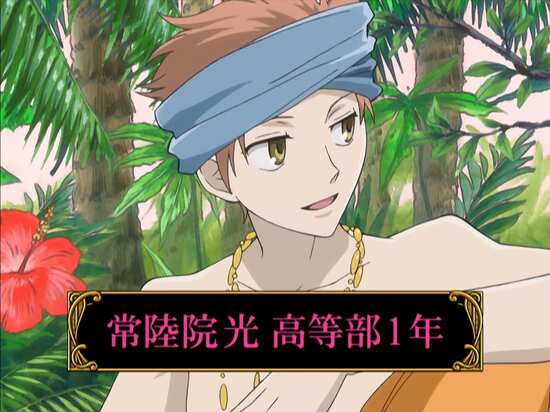 10. A Day in the Life of the Fujioka Family!
11. Big Brother is a Prince!
12. Honey’s Three Bitter Days
13. Haruhi in Wonderland!
14. Covering The Famous Host Club!
15. The Refreshing Battle in Karuizawa!
16. Operation Haruhi & Hikaru’s First Date!
17. Kyoya’s Reluctant Day Out!
18. Chika’s “Down with Honey” Declaration! 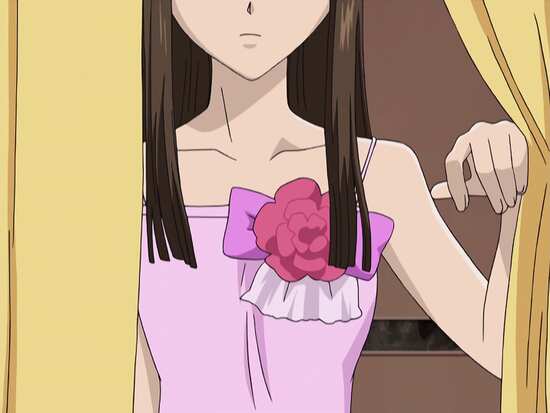 19. Lobelia Girls’ Academy Strikes Back!
20. The Door The Twins Opened!
21. Until the Day it Becomes a Pumpkin!
22. Mori-senpai Has an Apprentice Candidate!
23. Tamaki’s Unwitting Depression!
24. And so Kyoya Met Him!
25. The Host Club Declares Dissolution!
26. This is Our Ouran Fair! 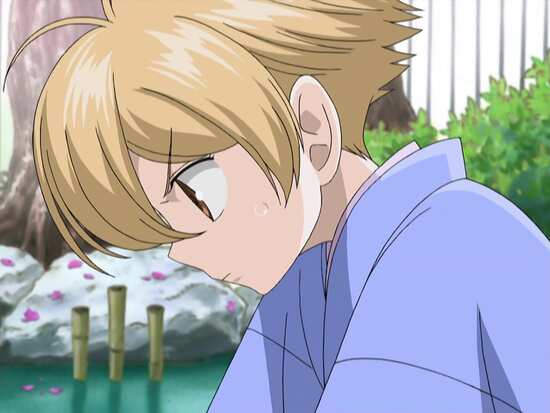 Ouran High School Host Club gets a 4:3 pillarboxed 1080p transfer across these three Blu-ray discs. It is a decent upscale, with enough in the way of post processing to keep the line-art looking crisp, while the colours are rich and vibrant. Even when you look close up, there’s not much in the way of smearing, or any at all, as you might see in some poorer upscales. Naturally there’s hardly anything in the way of compression or aliasing, but it really does look like very good SD upscale. There are the odd moments at scene transitions where pans and scrolls might judder for a few frames, but that’s a small complaint in the grand scheme of things. 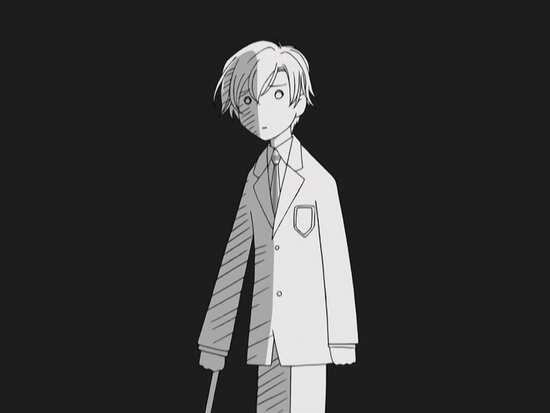 The animation is wholly pleasant, with simple but memorable character designs, vibrantly brought to life with more than the usual energy. The world design is wholly elegant, with an emphasis on the bright and fluffy. When your first impression of the show is a replica of Big Ben built as part of the school, but rendered in bright pink, then the direction of the show becomes clear. The Host Club are fond of costume changes, and a shower of rose petals heralds every new appearance. There is a lot of thought that has gone into the look of the show, and it really works well. 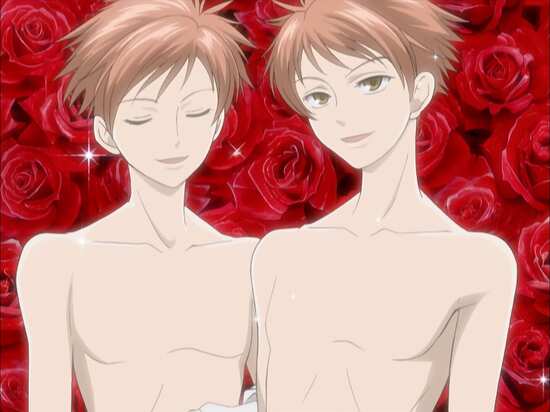 You have the choice between Dolby TrueHD 2.0 Stereo English and Japanese with optional subtitles and signs. The audio is fine, the dialogue clear, and the action and the music comes across well through the stereo. The actors are suited to their roles, and the subtitles are timed accurately and are free of typos. 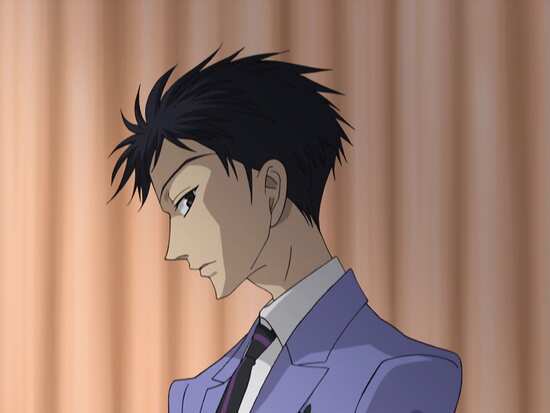 The problem is with the subtitle font. As with all of the early Funimation Blu-rays, Ouran High School Host Club uses that small, thin white font, which has a pixel wide black outline. The show dates from the early 2000s, an early digipaint show with crisp line-art and flat, pastel colours. It is so easy to lose the subtitles against busy backgrounds that you’ll probably spend a few minutes in each episode skipping back to get a better look. And I have to admit, given that Vic Mignogna has a significant role in the dub, I’m more reluctant to listen to the English version than I’ve ever been with this show. 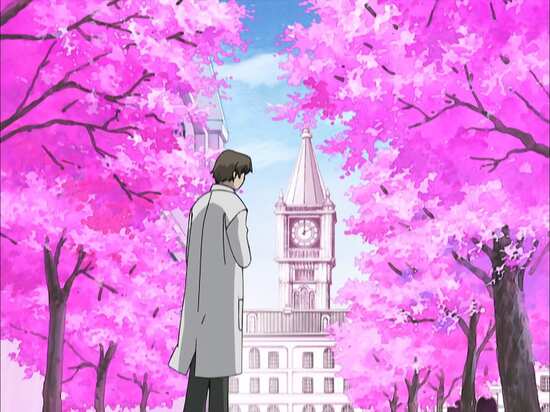 This is one of those releases that’s sold on the artwork, and that is all the more evident in the Collector’s Edition packaging. You get a chipboard slipcase which holds three discs on a digipack. You also find two sheets of character stickers, and a 32 page booklet full of character art. The blurb sheet on the back is peel-off-able if you’re careful. It all looks suitably pretty. 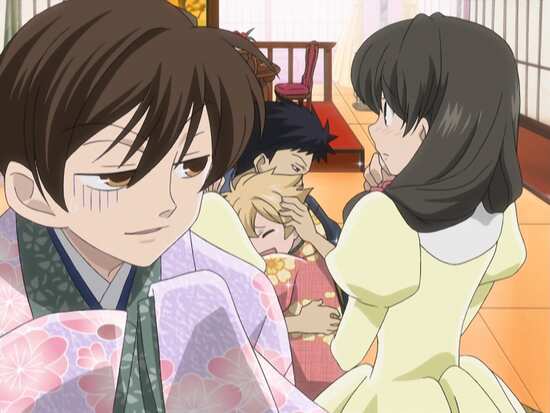 Disc 2 autoplays with a trailer for Gunslinger Girl.

The sole extra on this disc is the audio commentary on episode 18 with Caitlin Glass (Haruhi and ADR Director) and Aaron Dismuke (Chika). 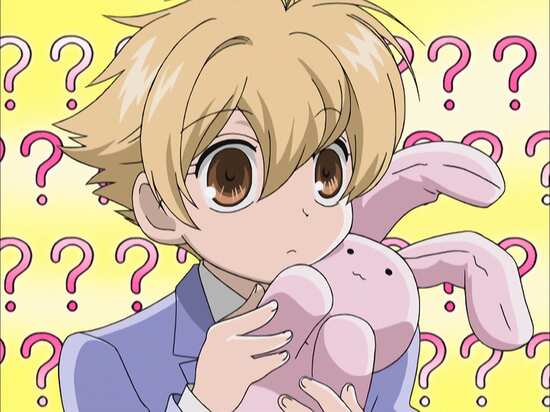 Disc 3 autoplays with a trailer for Fullmetal Alchemist Brotherhood.

Episode 24 has a commentary with Caitlin Glass, J. Michael Tatum, and Vic Mignogna.

You get 6 pages of the original manga to look at, and on the Blu-ray, they are legible. 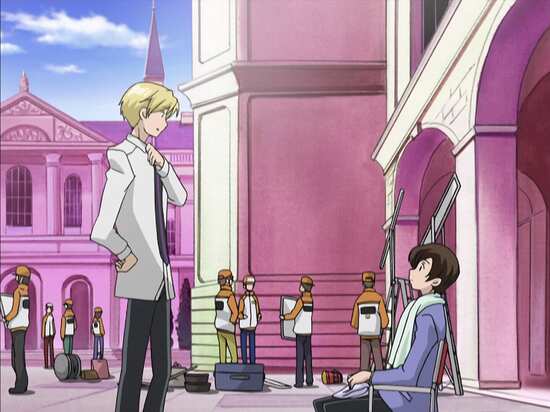 There are 33:33 minutes of outtakes on this disc, in two parts. 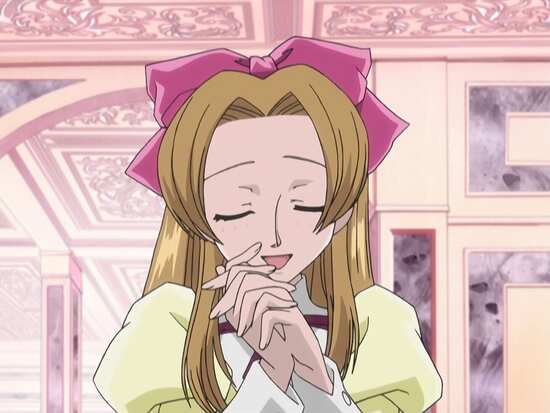 I’m coming at Ouran High School Host Club from the other angle, that of having seen the show five times now over the last ten years. That’s the point where familiarity with even good shows starts breeding contempt, the point where I might fall asleep during an episode if I’m up late and won’t be stressed by missing anything, as I know it so well. It’s the point where I start deciding to retire vintage classics from my collection as I doubt that I’d gain anything from another viewing, and especially in comedies like this one, the jokes are increasingly stale. 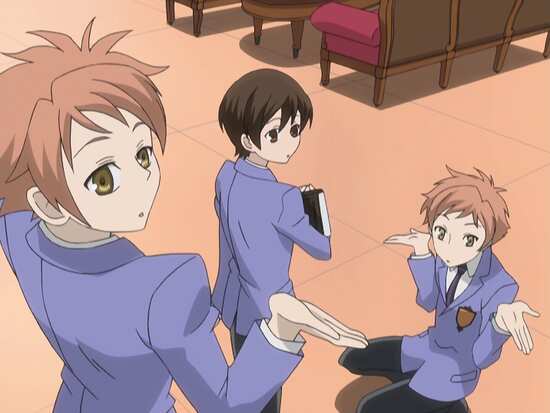 I have to say that Ouran High School Host Club has aged quite well. The characters are still appealing, the humour still hits most of the time, and the story, the episodes are very watchable. But I do feel that the show has lost that immediate charm that it had on first viewing. The familiarity with the show did initially lead to tedium, and I was on the verge of tuning out for the first half of the series. It was comfortably charming, rather than drop dead funny. 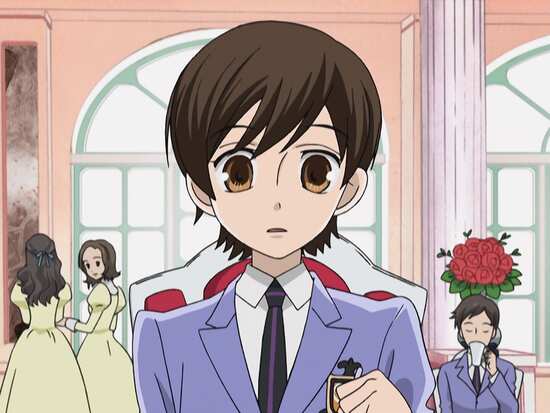 It is an absolutely daft premise, the idea of an after school ‘host’ club, where a bunch of mega-rich students at an elite school spend their free time acting as objects of lust for the school’s female student body, and they wind up drafting the solitary scholarship student when a vase is broken. Haruhi is to work off the debt, only it turns out that she is a she, not a he. So cross-dressing and concealing her gender becomes terms of her indenture. 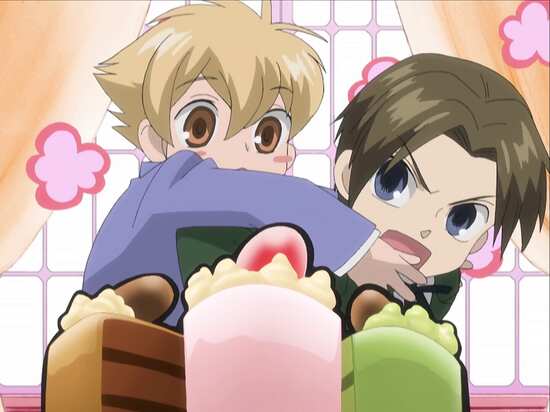 At this point, Ouran High School Host Club is a study in otaku fetishes, with the characters filling pretty boy stereotypes, and challenging taboos, in some cases the kind of things that might cause queasiness in a lesser show. Twin brothers flirt with one taboo, just to get their clientele squealing with glee, while another boy triggers the shota (little boy) fetish in other girls, the irony being that Honey is actually the oldest of them all, and is just yet to hit his growth spurt. The fifth time through, all of this humour is if not exactly stale, is certainly comfortable to the point of becoming background noise. 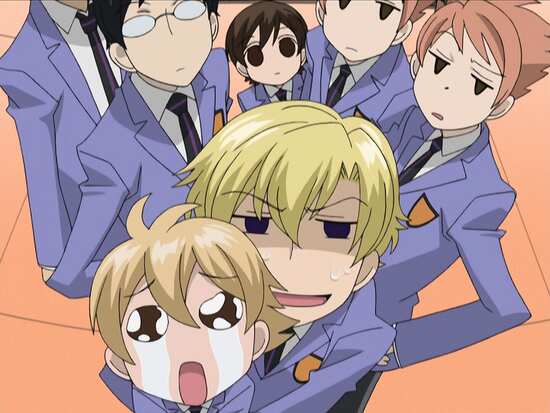 But then the second half of the show kicks off, and we start getting deeper into the characters, understanding what makes them tick, and more importantly, why they would join such a club, and I have to say that Ouran High School Host Club really does still deliver when it comes to its light drama, even if the humour isn’t quite as effective any more. 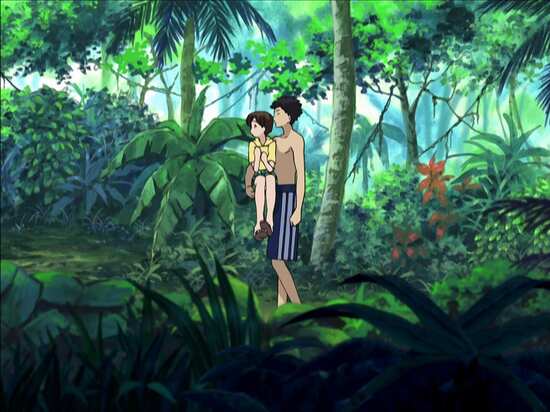 But there are those subtitles, and for me, they actually hinder my enjoyment of the series. It’s a pain trying to read them, especially when they get lost against busy backgrounds. Just try reading them during the opening credits. There are a handful of shows that I have, early Funimation Blu-ray up-scales of early digipaint shows, where the same thing happens; subtitles lost against busy backgrounds. Ouran High School Host Club now joins Fruits Basket and Chobits where I’ve actually kept hold of the DVDs, as they are easier to watch, the thicker subtitle font doesn’t cause eyestrain. The thing of it is, Ouran High School Host Club was released by Funimation in 2010 on Blu-ray, and they’ve been using the same discs in every re-release since then. All the Anime simply used those ten-year-old discs one more time. All they had to do was to change the subtitle font to something more legible...