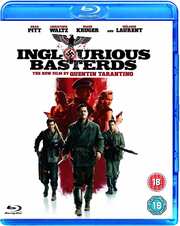 A movie about the Nazis, yet the most offensive thing about it is the name of the producer! It’s a thing when the credits roll on a movie and you see Harvey Weinstein’s name, and you wince. There’s a whole lot of cinema that man has tainted by his presence, and given all the revisionism that’s been going on, and the propensity for studios to tinker with films for each successive release, new masters, and 4k restorations and the like, would it hurt so much for someone to go through all these Miramax films with a digital sharpie and cross his name out? Then again, this particular disc release dates from 2009. I guess I’ll just have to wince and bear it.

During World War II, a clandestine unit was created, the ‘Basterds’, a group of Jewish soldiers put together for one purpose, to infiltrate behind enemy lines and to kill as many Nazis as possible. Their brutality became the stuff of nightmares for the Germans, the few soldiers they left alive were marked to send a message to the others. But in 1944, they got their chance for the ultimate mission. As the Allies placed a foothold in Normandy, to bolster morale, Josef Goebbels commissioned a film, Nation’s Pride celebrating the exploits of a Nazi hero. That film was to have its premiere in a Parisian cinema, and a whole heap of Nazi bigwigs were to attend. This was the chance to end the war in one fell swoop.

Inglourious Basterds gets a 2.40:1 widescreen 1080p transfer with the choice between DTS-HD MA 5.1 Surround English, and DTS 5.1 Surround Spanish and French, with subtitles in these languages. It was actually the audio that drew me to this film, as following the passing of Ennio Morricone, I was all set to re-watch a classic spaghetti western when I recalled that of late, he had been composing the scores to Tarantino’s films, and this film was on my unwatched movies pile. Suffice it to say, I had a grin on my face as his inimitable compositions made themselves felt at the start of the film. With such a recent film, it’s once again impossible to pick nits with an impeccable transfer. The image is clear and sharp, detail levels are excellent, and there’s no issue with visible compression. The audio too is strong, making full use of the surrounds to convey that music, the action, while the dialogue remains centralised as it should. However, I did find that this was one of those films where I had to ride the remote, as the dialogue was a little low in the mix.

You get one disc in a BD Amaray case, which boots to the stock Universal animated menu. There is the BD-Live content if you can be bothered.

There are plenty of extras on the disc.

There are 3 Extended or Alternate Scenes running to 11:26.
Nation’s Pride – Full Feature (6:10).
Roundtable Discussion with Quentin Tarantino, Brad Pitt and Elvis Mitchell lasts 30:45.
The Making of Nation’s Pride is a 4:00 parody featurette.
The Original Inglourious Basterds looks at the 1978 movie, and the stars that cameod in this ‘remake’ (7:39).

All of these extras are presented in various aspect ratios and resolutions, from 480i to 1080p.

The only good Nazi is a dead one; words just as true now as they were 80 years ago. None of this ‘good people on both sides’ bullcrap! Inglourious Basterds on the surface offers the vicarious pleasure of seeing many members of the ‘master race’ get their just desserts at the hands of a group of people that have the most justifiable motive to deliver that punishment.

It’s all delivered in Tarantino’s notable style, plenty of dialogue that is about everything but the story, involved character study, a narrative that is deliciously unconventional, that trademark Tarantino violence, and a love for cinema that oozes from every frame, doubly so in this film, given that much of the denouement is set in a Paris cinema. It’s a novel in film form, a tale told in five chapters, with the first three devoted to introducing the main characters, and the final two resolving the story arcs.

Christoph Waltz won the Oscar for his portrayal of Hans Landa, the Jew Hunter, the Nazi officer who in 1941 at the start of the film is combing the French countryside for Jewish families that had escaped the initial invasion. The opening is pure Spaghetti Western, with he and his men riding up to an isolated farm house the way Lee Van Cleef did at the start of the Good the Bad and the Ugly, and sitting down at the kitchen table to be break bread, or in this case share milk with the farmer. And through sheer force of personality and intimidation discovering whether or not that farmer is harbouring refugees. Naturally Ennio Morricone’s score does much to accentuate that Spaghetti Western feeling.

Then there are the Basterds themselves, retribution personified in the squad led by Aldo Raine, an unforgettable performance by Brad Pitt. They wreak vengeance upon the Nazis in such a way that their squad quickly becomes feared, the monsters that the monsters dread. The final story arc follows Shosanna Dreyfuss, a girl who escaped Landa in 1941, and has since reinvented herself as the owner of that Paris cinema. She catches the eye of a German soldier who attends screenings there, and it turns out that he’s a hero that has inspired the Reich to make a propaganda film about his exploits. Enamoured with the girl, he wants her cinema to host its premiere in front of the high and mighty of the Third Reich. Normally she would wretch at the idea, but it’s the perfect opportunity for her revenge, especially as Landa is now in charge of security for the screening.

The British also get wind of the screening, and the idea of the Germans having all their command rank and political eggs in one basket is too good to miss. They assign a film critic who is now an army lieutenant to hook up with the Basterds behind enemy lines and take the opportunity to bomb the cinema.

Inglourious Basterds is a whole lot of fun to watch, full of great characters, and typically excellent writing. Tarantino has his ‘Downfall’ moment with a Hitler meltdown, and it’s great to see a period movie where people speak their own languages, instead of accented English. The subtitling can be fun too. It’s not perfect though. Inglourious Basterds is certainly overlong. The scene in the cafe is wholly indulgent at points, and my eyes certainly strayed to the clock, although the way the scene ends does in some ways justify the length. And then there is the Mike Myers character, which snapped my disbelief suspenders most painfully. All of a sudden, I’m watching an Austin Powers movie. Tarantino may have rehabilitated John Travolta’s career with Pulp Fiction, but I won’t be racing out to see the next Mike Myers film! Even still, make some time to watch Inglourious Basterds... It’s glourious!