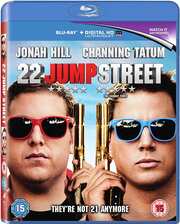 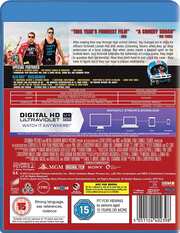 I came at the first film, 21 Jump Street all wrong. I read the blurb and went in expecting the wrong kind of action comedy, the kind with a lot of action, livened up with plenty of wisecracks. Instead, 21 Jump Street turned out to be a spoof comedy remake of a late eighties television series, with a bit of action in it. It took me a while to rewire my preconceptions, and even longer to get into the film, but in the end I did enjoy 21 Jump Street, and it’s a rare modern Hollywood comedy that actually made me laugh. It was certainly enough for me to take a chance on the sequel, and I now get around to watching 22 Jump Street, and this time I have my preconceptions on the right settings even before I press play.

Jenko and Schmidt managed to turn their success at 21 Jump Street into a return to mainstream policing, but their partnership tends to cause more chaos and mayhem than the city can afford. When their latest attempt to bust a smuggling ring fails miserably, they’re sent back to the unit where they last managed to succeed. Only the address has changed. They may be back at 22 Jump Street, but they can’t pass for high school students any more. This time, they have to go undercover as students at a university, posing as brothers Doug and Brad McQuaid, trying to track down the source of a new designer drug called WHYPHY, that has already claimed the life of one student. If the assignment seems familiar, it’s because their superiors want the same again. But this partnership is about to hit a rocky patch.

22 Jump Street gets a 2.40:1 widescreen 1080p transfer with the choice of DTS-HD MA 5.1 Surround English and French, with a DD 5.1 Surround English Audio Descriptive track as well. You get subtitles in these language and Hindi and Dutch. There’s no problem with the image, which is impeccable. The detail levels are excellent, colours are consistent, and there’s no sign of compression. The audio too is good, the dialogue is clear throughout, while the action and especially the music soundtrack are represented well. The only nit to pick might be some dodgy effects work. You won’t believe that Jonah Hill can fly.

You get one disc in a BD Amaray case, and if you’re lucky, an o-card slipcover. In the case you’ll also find a defunct UV code .The disc boots to a static menu, and you get a whole lot of extra features.

The film gets a commentary with directors Phil Lord & Chris Miller, along with stars Jonah Hill and Channing Tatum. It’s a raucous get together which is fun to listen to.

There are 22 Deleted and Extended Scenes running to 39:52 in total, with optional director’s commentary.

There are 6 Making Of Featurettes with a total runtime of 50:35.

The Dramatic Interpretation of 22 Jump Street shows the film with all the comedy removed. This re-edit lasts 9:59.

Finally there are trailers for Think Like a Man Too, This is the End, and Sex Tape.

I enjoyed 22 Jump Street even more than the first film, although as mentioned, I knew full well what I was going to get this time, and my chuckle muscle was primed and ready. 22 Jump Street delivers more of the same mismatched undercover cop comedy, more of the same slapstick, and more of the same broad humour. That’s the biggest running joke in the film of course, as it’s self-referential from the off, threatening the fourth wall, and completely aware that it is a sequel.

The set-up is the same, the story is the same with only the setting updated to a university, but the big difference is that the main characters patently don’t want to be in a sequel. They want to do something different, and if the situation doesn’t change, they’ll have to. That’s the character arc in the film, as Jenko and Schmidt’s partnership comes under strain. Of course this is all couched in romantic and relationship terminology, which comes to a head when they end up in a couples counselling session.

One thing that I really appreciate is the story is well-written. While it is treading familiar ground, this time it does feel as if the characters are solving a mystery. The source of the drug is hard to find, and they hit plenty of dead ends, and come across quite a few red herrings, which all tests their partnership. The story is quite smart in the way that it misdirects the audience, even given how focused on the comedy it is. Also, being so self aware, it also ties in really well with the original film, revisiting some of the characters.

It’s an oxymoron certainly, but 22 Jump Street is a really smart dumb comedy. The jokes aim for the lowest common denominator in the way that I usually decry in Hollywood comedies, but in this film it’s actually a little endearing. But the film has a self-awareness to it that is so well crafted and rewarding that it’s actually the better of the two films, although it’s only better if you’ve seen the first film, otherwise you’ll miss the point of the joke. As you’d quite rightly expect at this point, the presentation on Blu-ray is excellent and hard to fault.