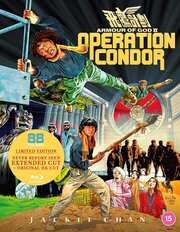 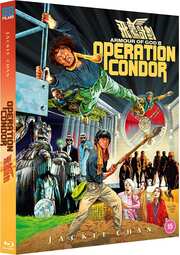 88 Films have in their release schedule, Blu-rays of Dragon Lord and Fearless Hyena coming up. Back when Hong Kong Legends were releasing Jackie Chan movies on DVD, it was the Dragon Lord and Fearless Hyena discs that convinced me that the Jackie Chan well had dried up, that all the good stuff was now available. What’s amazing with the Blu-rays is that we’ve got to that point in little more than three years (although this time, quite a few notable titles like Young Master and My Lucky Stars have been missed out). Back in 2017 Eureka Entertainment released Drunken Master on Blu-ray. Suddenly energised at the prospect of getting to own my favourite kung fu movies on Blu-ray, I went searching online, and found only two, the two Armour of God films. The first Armour of God was released by Mediumrare Entertainment and is a passable HD presentation, inconsistent at best, with a couple of technical issues, but watchable. They also released Armour of God II, but that was an SD upscale, so I gave that one a miss. It’s a good thing I did, as Mediumrare’s license lapsed, and 88 Films picked it up, along with a 2k restoration of the film. They’ve given it a proper Blu-ray presentation worthy of the name and their usual, meticulous curation.

This particular title has been the most elusive of the Jackie Chan films that I want to own. I saw it on TV once in the original Cantonese when I was a teenager and that was it. Every subsequent re-showing was the dub version, which makes me grind my teeth, and when it came to buying it, I was too late for the HKL DVD, which was sold out by the time my mental note triggered. And infuriatingly it wasn’t one of those titles re-released by Cine Asia when HKL rebranded. Having seen the work 88 Films did with Miracles and Dragons Forever, I didn’t hesitate this time, and pre-ordered their Blu-ray release of Armour of God II: Operation Condor.

Jackie is still buckling swashes, as he travels the world hunting treasure, but he’s about to be assigned his most challenging mission yet when he’s summoned back to Spain. At the end of the Second World War, the Nazis took 240 tonnes of looted gold to stash away in Africa. The United Nations wants to recover that gold before more unsavoury characters obtain it, and repatriate it to the original owners. It’s up to the Asian Hawk to find that lost Nazi base in the Sahara, but this time he won’t be alone. Ada is an expert in the desert, Elsa is the granddaughter of one of the Nazi officers, and Momoko is a street hawker who knows North Africa. Dealing with all the various factions after that gold might be child’s play compared to dealing with three beautiful women.

Armour of God II gets a 2.35:1 widescreen 1080p transfer on this disc. The 2k restoration has brought the film out a treat, and the image looks wonderful on this disc. Detail levels are excellent, the colour is rich and consistent, and there are no issues with visible compression, aliasing or banding. The restoration has been sympathetic, in that there hasn’t been significant post-processing applied, and the movie looks properly filmic, with a consistent level of grain, and even some odd moments of filmic flicker. This is all to the good, as at the time, Armour of God II was the most expensive Hong Kong movie, and that really tells in the globetrotting locations, and the production values, although maybe not the obvious product placement.

For the Hong Kong version, you have the choice of PCM 2.0 Mono Cantonese with an English subtitle track, PCM 2.0 Stereo Cantonese with a different subtitle track, and the PCM 2.0 Mono English dub, which autoplays with a third subtitle track (probably for signs or non-English dialogue). As I watched the extended version, the only choice there was PCM 2.0 Mono Cantonese with optional English subtitles. The audio is adequate, properly reflecting its roots and age, the action comes across well, the dialogue is clear and well synced up given the ADR process behind Hong Kong film audio of the time, and if there is a smidge of distortion at more strident moments, that isn’t to be unexpected. The subtitles are timed accurately and are free of typos, they flow well, and are easy to read, and avoid the occasional transliteration that briefly jarred me out of Dragons Forever and Miracles.

You get one disc in a BD Amaray case with a reversible sleeve, one side of which repeats the art and blurb on the o-card slipcover. There is a 52 page booklet in the case which offers an essay on both of the Armour of God films and an interview with stuntman Vincent Lyn, as well as plenty of promotional and behind the scenes imagery. The disc boots to a static menu, and you only get a pop-up menu on the HK cut.

On the disc, the Hong Kong cut gets an audio commentary from Arne Venema and Mike Leeder that is well worth listening to.

There is an interview with Bruce Fontaine, who has a role as a minor villain in the movie which lasts 20:01. It’s a little deceptive, as it’s a new interview, but in terms of music and content it’s done in the style of an HKL extra feature.

With 88 Films and to a lesser degree Eureka Entertainment, we’ve chanced upon a new way of releasing Hong Kong movies. These releases are by the fans, for the fans. Sure, companies like 88 Films buy the rights, obtain the licenses to release the films, but then they send out the call on social media, and specialist forums, and they seek out alternate audio tracks and dubs, extra material, different versions of the films, and source new, and better subtitle translations, all to make the best possible releases of classic films, you might say the definitive releases. If you’ve seen 88 Films Dragons Forever, or Eureka’s Project A, you’ll be happy with those, and unlikely to seek out another territory’s release, or wait for a ‘better’ one. Operation Condor is just like that. This feels like the definitive release of the film. I sincerely hope they get to apply the same treatment to the original Armour of God, so we can have a matching set.

It’s fair to say that The Armour of God was inspired by Indiana Jones, with Jackie as the kung-fu fighting archaeologist travelling the world looking for ancient treasure. With its contemporary setting, it allowed for plenty of Bond style gadgetry on top. But the Armour of God was lacking just one thing to make it a true Indiana Jones clone. Operation Condor rectifies that deficiency. It adds Nazis.

It’s the production values that make Operation Condor so memorable, especially given the 2k restoration. You can really appreciate the locations used in the film, extravagant and filling every inch of that widescreen scope. It makes the film feel much larger than it actually is. After all, Operation Condor is a kung-fu action comedy, and a complex story would detract from what it’s trying to achieve. It’s a treasure hunt, and a pretty straightforward one at that. All they have to do is find a WWII German base in the middle of the Sahara, and unpick the puzzle that will get them into the vault.

The challenge comes from those others seeking the gold. Given this film was made in less sensitive times, there is no offensive subtext to the plot where the Nazi gold, stolen from the Jews, is being sought by a couple of Arabs who want to stick it to Israel. They’re the comedy villains in the film, the ones that fight to the bruise rather than to the death, not too competent, but just enough of a threat. The real villains turn out to be one of the original survivors of that Nazi mission, and the mercenaries he hires.

The comedy ensues from the characters, not least the fact that Jackie has to ‘juggle’ two beautiful women, and later three. The film somehow manages to have its cake and eat it, just like a Carry On movie as stated in the commentary, managing to be sexually provocative with occasional glimpses of nudity, without ever suggesting the prospect of romance. Ada’s the uptight librarian type that wants to be in charge, while Elsa is a little more easy-going. They detest each other at first sight, so an antagonistic triangle develops with Jackie stressed in the middle. Momoko is a lot more bohemian, and when she joins the group in the last act, she’s the damping rod that cools down the reaction. This is necessary as the group have to work together to defeat the mercenaries at the end.

Armour of God: Operation Condor features Jackie Chan in his prime. Some might say that the actual kung-fu is toned down, less choreographed, with a greater emphasis on action comedy. This is where the use of props, working the location, finding the possibilities in the environment comes in, and the stunts get more and more intense and outrageous. This isn’t about traditional styles and long, choreographed fights with twenty or thirty moves in a single cut. This is fast editing, and ‘blink-and-you’ll-miss-it’ action. That’s except for the more spectacular stunts, like one particular motorcycle stunt that gets replayed four times from various angles, because it is that nuts.

The comedy too gets a greater emphasis, and there are plenty of sight gags and cute moments, and nowhere near as much of a focus on wordplay and banter as in other Jackie Chan comedies. This comedy remains in the physical realm and is better for it, as it plays to universal audiences.

Operation Condor isn’t my favourite Jackie Chan film, but it might be the most fun. It’s sheer entertainment from beginning to end, and it never lets up for a minute. Sure, after all these years, some of the characterisations and depictions might be a little iffy and not exactly politically correct, but you forget things like that when you’re grinning like an idiot for the better part of two hours. 88 Films have come up trumps with this Blu-ray release, offering the authentic audio experience with exceptional visual quality.