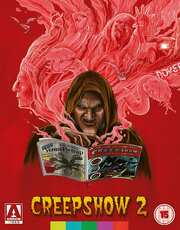 Creepshow 2 is the sequel to the George Romero-helmed anthology based on Stephen King stories. Once again Stephen King has provided the stories, but Romero only contributed the script to this new anthology helmed by Michael Gornick. Gornick was a Director of Photography for many of Romero’s films including the first Creepshow and Dawn and Day of the Dead. Sadly, this film, consisting of three stories, wrapped with a cartoon interludes is nowhere near any of those films and other than for TV he did not direct any other films.

This film contains two original stories from Stephen King: Old Chief Wood’nhead and Hitchhiker and an adaptation of a previous short story The Raft. It would be hard to discuss the film as a whole because I feel that this is unfair to the segments themselves and so I will review each segment individually.

Segment One: Creep and Cartoon 2/10

This is only a few minutes and only really significant when you know that that Creep is played by Horror Makeup Master Tom Savini. It seems bizarre they would go through all the effort of this make-up and use it only for a few minutes.

However, the cartoons that wrap around each section are quite frankly awful. This animation is very crude looking (similar to the animation style of the Star Wars Holiday Special) and a shame seeing as one of the people responsible went on to be part of the teams that created Johnny Bravo and the Ultimate Spider-Man cartoons. There are three of these in between each segment telling the story of a kid Billy being bullied and getting his revenge. This would have been so much better as live-action and it is a shame that it looks so bad.

This segment is the tale of a couple who run a store being robbed and during this robbery the three thieves steal a bag of precious Native American jewels. This awakens the statue of an old warrior outside the shop who enacts bloody revenge on them. I enjoyed this section and the effects were fantastic. My only issue is that it goes on for far too long. This could have easily been cut by ten-fifteen minutes and been a lot more effective.

In this segment four College kids Deke, Randy, Laverne and Rachel travel to a remote lake to swim and sunbathe on a raft. Getting there they discover a blob on the surface of the water that appears to be stalking them. One by one, it picks them off covering them in blob-like slime and consuming them. Finally, after Randy makes sexual advances on Laverne while she is asleep the blob attacks Laverne and Randy makes his escape to the shore.

This segment was the most painful to sit through. All four characters were such proto-typical 80s fodder that you could guess what was going to happen to them. The effects on the blob were fine, but it again just went on far too long.

Annie, after sleeping with a gigolo, drives home, hoping to get home before her husband. On the way she accidentally runs over a hitchhiker. Rather than stop, she carries on, but the hitchhiker keeps returning to scare and attack Annie for not doing the right thing.

This was an odd segment and feels more like a one-note joke that keeps being beaten like a dead horse. The character design of the hitchhiker and his deterioration is great and the moral is fine, but the whole thing just felt bizarre.

Of these segments the only one that was worth watching was Old Chief Wood’nHead, the other two just felt flat and are neither scary or funny. This is a shame as it feels like as an episode of a TV show it would have been great, but it just feels lost in this film. The main thing that is remarked throughout all the extras is the lack of budget on this film and it shows. At times the film feels a little cheap and ‘last minute’ which works in some ways, but the lack of anything memorable meant that I left the film with very little to remark on or remember. Acting throughout every segment feels like a TV-movie and this is a shame.

Usually, when I don’t enjoy a film I groan at the amount of extras I have to go through. However, this is one of those occasions when the extras are actually better than the film itself. The Commentary with Director Michael Gornick is great and I think his experience with Romero in the past helped and he was full of interesting stories about the making of the film.

Poncho’s Last Ride is a new interview with Daniel Beer who played Randy in The Raft segment. He has some interesting stories and (as with many) it is about how low budget it was and how uncomfortable it was filming on the cold lake.

The Road to Dover is a new interview with Tom Wright who played The Hitchhiker in that segment. This again was interesting to see how the created the make-up and how he got involved. Screenplay for a Sequel is an interview with Writer George A. Romero about his work on the original and also on this one. It is a shame he wasn’t included on the Commentary as he had some great stories about the creation of this movies.

Tales from the Creep is an interview with actor and make-up artist Tom Savini who created the make-up for the original film and played The Creep character. This showed how much work went into those few minutes of screen time and also he gives his opinion on the effects almost like a father figure judging the work of his children.

Speaking of which, the best extra is Nightmares in Foam Rubber with the special effects team of Howard Berger and Greg Nicotero.

There are two odd featurettes My Friend Rick is basically Howard Berger saying how much he respected the work of his mentor Rick Baker, but this really has no purpose here. Also a Behind-the-Scenes Footage segment which is just a lot of setups for The Creep and the make-up process which was fine, but just bizarre to see and would have been better with someone commenting on it.

The set is finished with the usual Image Gallery and Trailer and TV Spots which serve their purpose.

Now, Creepshow 2 is not a bad film and some of it was enjoyable. However, in comparison to other anthologies and other horror films it fails somewhat. At times it feels a little directionless and maybe as three episodes of a Horror TV show it would have been fine, but as a whole piece it didn’t seem to work. A lot of times anthologies/sketch show films are only strong if they work as a whole and this one just loses something.

If you want to see some great special effects and listen to some great behind the scenes stories then you may not get creeped out by this show.