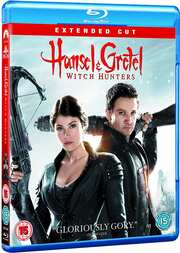 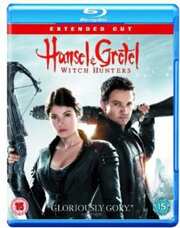 I like to challenge myself sometimes, although probably not in the way that you’re thinking. This isn’t about excellence; it’s more about mediocrity, and even downright awfulness. I watch a lot of films, and unsurprisingly, I want to watch the good ones, the great ones, the ones that garner the most critical acclaim. But there is a masochistic part of me that also wants to watch the bad ones. I could say it’s about keeping a genuine frame of reference, that you won’t know the light if you’ve never experienced the dark, but that would be a lie. I just think that I like a little pain from time to time. So when browsing a bargain bucket, and my eyes alit upon Hansel & Gretel Witch Hunters, with a moody pose from Jeremy Renner and Gemma Arterton on the front cover, a film I had never heard of, I was certain that I had found my latest form of cinematic self-harm; just what I need to distract from the pain of a Covid-19 lockdown.

What happened next? We all know about brother and sister, Hansel and Gretel, lost in the woods, the gingerbread house, the child-eating witch and her demise in the oven. It turns out that set the siblings on a career path, and they grew up to become legends, hunting and disposing of witches in as brutal a manner as possible. So when a town becomes victim of a spate of child kidnappings, the cause is obvious. The local sheriff is quick to single out a likely witch, but the mayor has hired the professionals. The sheriff doesn’t take too well to having his competency brought into question, but Hansel and Gretel get results. But there is something odd about the children that are missing, and a particularly powerful witch named Muriel is planning something truly evil.

The UK release solely has the extended cut of the film on the disc. If you want seamless branching with the theatrical version, you’ll have to get the Region A release.

Hansel & Gretel Witch Hunters gets a 2.40:1 widescreen 1080p transfer with Dolby True HD 5.1 Surround English, and DD 5.1 Surround French, Japanese, Spanish, English audio descriptive, with subtitles in these languages and Dutch. It’s a pleasant transfer of a recent film, nicely detailed and with rich, consistent colours. But it has that digital look to it which means darker scenes suffer from weak contrast, and crushed blacks. The audio is fine though, with a nice, resonant surround presentation which makes the most of the film’s action, while keeping the dialogue clear. The period fantasy is brought across well with the film’s production design, with plenty of odd anachronisms and steampunk weaponry. The effects are variable though, with the CG ranging from good to glaringly bad, while some of the fight choreography lacks continuity.

You get one disc in a BD Amaray which boots to an animated menu.

There are three featurettes on this disc, Reinventing Hansel & Gretel (15:41), The Witching Hours (9:01), and Meet Edward the Troll (5:25), all of which take us behind the scenes of the film, with interviews with cast and crew.

I am disappointed with Hansel & Gretel. It’s not painfully bad. It’s not bad at all. It turned out to be a lot more fun than I expected. They’ve taken the Grimm fairy tale and extrapolated it, given it a steampunk, Whedon-esque character makeover. It’s basically a fantasy action movie, wearing mediaeval clothes but spouting contemporary dialect.

Siblings Hansel and Gretel are reinvented as bounty hunters, armed with attitude and gadgetry, as well as some impressive weaponry. Their brief time trapped in the gingerbread house with a hideous, child-eating witch has left its mark on them, including an insulin dependency for Hansel. They now hunt witches and do so in a brutal and gory way, despatching them as viscerally as possible.

With such reputations, they need an suitably powerful foe, and that’s where the witch Muriel comes in, a rare witch that can take on human form (a form which looks just like a glamorous Famke Janssen), and who has a dastardly evil plan in progress, which involves kidnapping a bunch of children from a backwoods village, as well as a certain ingredient for a special potion. She’s both devious and powerful, and with her fellow witches, she’s more than a match for Hansel and Gretel. That’s on top of the problems that the siblings have with the town’s sheriff, who’s at odds with the mayor that hired them, and takes an instant loathe to Gretel when she head butts him for trying to lynch an innocent woman as a witch. Things get even more complicated when it turns out that their own pasts, before they wound up in the gingerbread house, are tied into Muriel’s plan.

Hansel & Gretel works because of the characters. They are all so enjoyable and they fill the screen. It also helps that the film refuses to conform to period authenticity, and plays every daft anachronism it can find, from Hansel’s steampunk insulin syringes to a record player that wouldn’t look out of place in a Flintstones movie. It starts with the clank of milk bottles with sketches of missing children pasted on. Hansel and Gretel have a playful sibling relationship which is a lot of fun, while the various witches chew the scenery with abandon. And on top of that you have Peter Stormare as the sheriff, delightfully good value.

Hansel & Gretel Witch Hunters is a pleasantly small production, comparatively speaking. That’s a good thing, as not everything has to be the next Hollywood blockbuster, and not everything has to conform to the studio money-spinning handbook. That means that Hansel & Gretel can embrace that Grimm darkness in such a way to allow for plenty of gore and some narrative nastiness. It has its issues. Some of the effects show the seams, while I was questioning the continuity of the action choreography on more than one occasion, but when it comes to reinventing gothic fairy tales with a contemporary edge, Hansel & Gretel gets it mostly right. Let me put it this way, it’s miles better than Van Helsing.