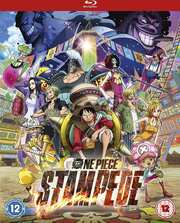 Review for One Piece: Stampede

I try so very hard not to fall in love with long running series and extensive franchises any more, having been financially drained for several years by my unconditional love for all things Star Trek, and then a couple of years ago, coming to my senses and taking the whole of Star Trek Voyager to a landfill. But somewhere along the way, I fell in love with the longest of long running current anime franchises, One Piece. And much as I appreciated Manga offering a streaming link to One Piece Stampede for review, having last year imported Film Gold to temporarily sate my One Piece addiction, I knew that One Piece Stampede would be in my collection one way or another. Thanks to a certain e-tailer who mails packages before the release date, I got a shiny Blu-ray of One Piece Stampede to review. 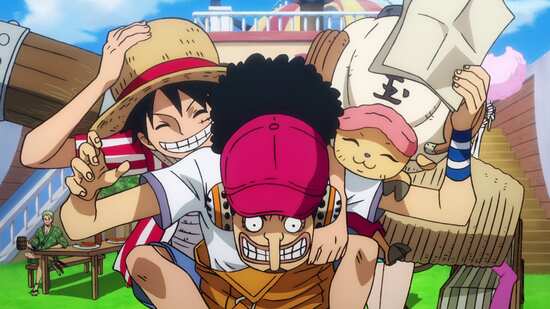 It immediately raises the kind of questions that will bug an anime reviewer in the middle of the night, although will probably mean nothing for the average punter. Originally, Funimation was distributing One Piece in the US, but for the UK release, Manga dealt directly with Toei in Japan, using the Funimation (or Australian Madman) materials for the TV discs, but getting a step ahead when it came to releasing the first nine movies on DVD (eight of which are yet to have a US release). But Manga Entertainment is now owned by Funimation. They released Stampede in the US back in March, and you would reasonably expect the UK release of Stampede to be the US disc repurposed for Region B. It’s not! This time, Manga have re-authored the Blu-ray for the UK market, just as they might have done before the Funimation buyout. It’s a head scratcher, and it makes me wonder what disc Madman will release in Australia. Not that there’s that much difference when it comes to content. 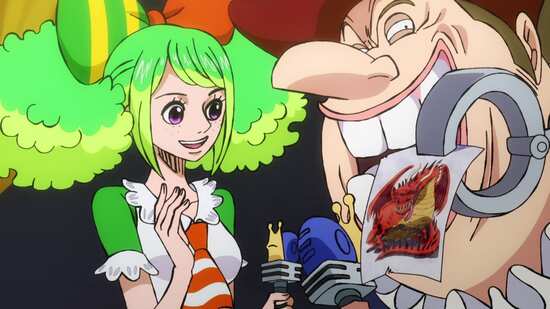 One Piece Stampede is the 20th Anniversary celebration of the anime (not the manga), and I have read elsewhere that it’s more a love letter from the anime creators than it is from Eiichiro Oda who writes the manga. 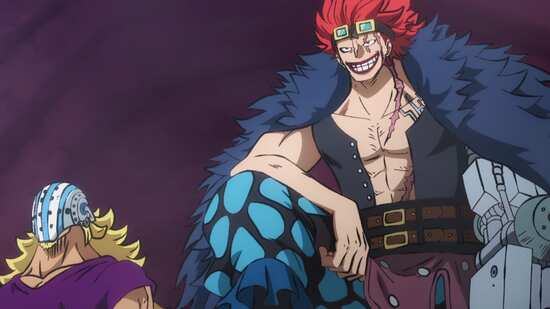 Monkey D. Luffy wants to find the lost treasure of Gol D. Roger, the legendary One Piece, and thus become King of the Pirates. To that end, he has gathered a crew, comprising Zoro, Nami, Usopp, Sanji, Chopper, Robin, Franky and Brook, and together they set sail on the Thousand Sunny on the Grand Line. This story takes place in the New World, two years after the events at Marineford (which is where we are in the UK TV series release). 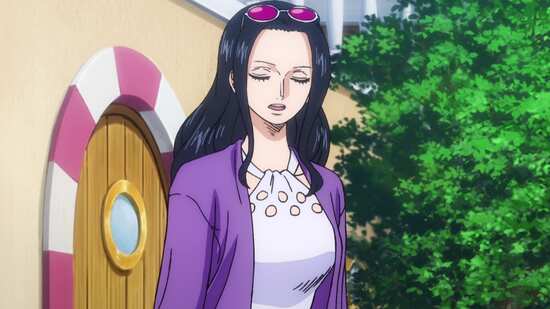 They’ve had countless adventures on the high seas, but as this film begins, the Straw Hats receive an invitation from Buena Festa for the Pirate Fest. Buena Festa has a long seated reputation for holding festivals, and Pirate Fest is open to all of the pirates on the Grand Line. It’s not only a party this time; it’s a treasure hunt too, with a madcap chase after a rare treasure, supposedly left behind by Gol D. Roger himself. The only rule is to keep the Navy out of it. But someone’s ready to break that rule, someone with a long-seated grudge against the pirates and the new era that Gol D. Roger ordained that day on the scaffold. 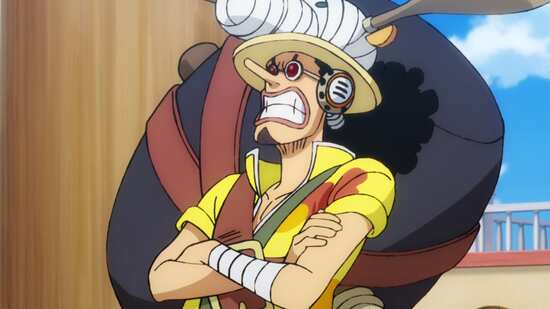 Stampede gets a 1.78:1 widescreen 1080p transfer on this disc. The image is clear and sharp, detail levels are good, and there are no signs of compression or aliasing, and digital banding is minimal. In terms of the film animation itself, it’s a bit of a mixed bag. The action animation is astounding, some of the best I have seen from One Piece, but when it comes to the rest of the animation, it’s rather static and minimal, much in the way of the rest of the TV series, and certainly not on a par with something like Film Gold. There’s also been an aesthetic choice to give the character designs a rough and ready makeover; they feel more like comic art than ever with bold outlines and less crisp edges. Ironically, that gives them more of a 2D feel against the rich backgrounds (I was reminded of Captain Pugwash), yet when the 3D CG elements appear, you get the sense of three art styles that don’t belong together. 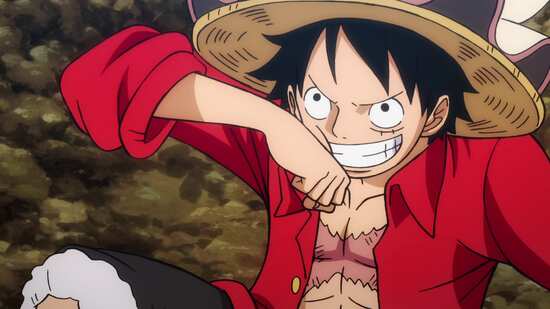 The big difference is in the audio options. Funimation use Dolby TrueHD on their Blu-rays, Manga Entertainment’s release of Stampede uses the DTS-HD MA format, 5.1 Surround English and Japanese, with optional subtitles and a signs only track. The subtitle font is the one Manga usually use, albeit white instead of light grey. The one place there is Japanese text onscreen and dialogue, the text isn’t translated, but the context is easy to discern. I went with the Japanese audio, as I’m familiar with the characters that way, and was happy enough with the experience. The dialogue is clear throughout, the action comes across well, although I did feel that the music was a little subdued in the mix. Stampede revisits quite a few classic One Piece themes, reminding you of its anniversary status. The subtitles are accurately timed and free of typos. 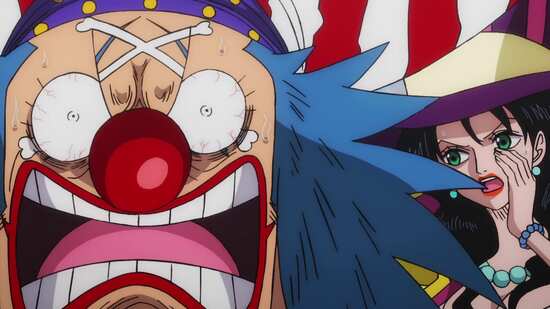 You get one disc in a BD Amaray, wrapped in an o-card slipcover which replicates the sleeve art. The inner sleeve offers some One Piece mini-poster art.

The disc boots to a static menu, which once again has more of a Manga style than a Funimation style. 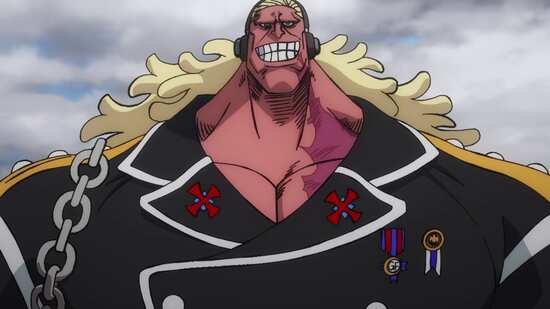 The sole extra on the disc is shared with the Funimation release though, a Behind the Scenes with the Cast featurette which lasts 15:25, as the cast pair off to chat about the 20th Anniversary film. 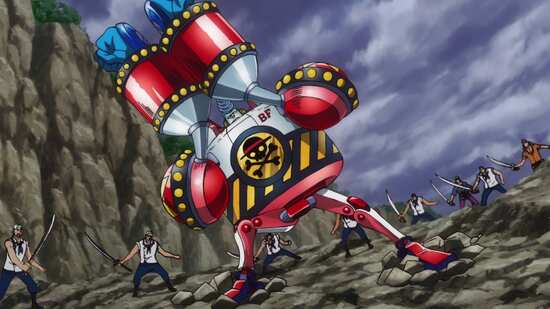 I haven’t seen the last two Avengers movies, but having watched One Piece Stampede, I think I have an idea of how those Marvel films feel. For Stampede, Toei took the entire 20 year legacy of televised and film One Piece, and they just threw it at the screen. This film is a love letter to that which came before, and if you are a fan, there won’t be a single moment that won’t tickle you, or prod your nostalgia. It’s a film replete with call-backs and references, and there are character cameos stretching right back to the beginning of the series, and also featuring characters that we in the UK are yet to encounter in TV anime form. That is a whole lot of history to pack into 102 minutes of run time, and it isn’t surprising that you’ll miss half the references by just blinking. That makes the re-watch value of Stampede quite high. I haven’t seen a film as dense with references since Ready Player One, and it is probably even more densely packed with familiar characters than the aforementioned Avengers movies. 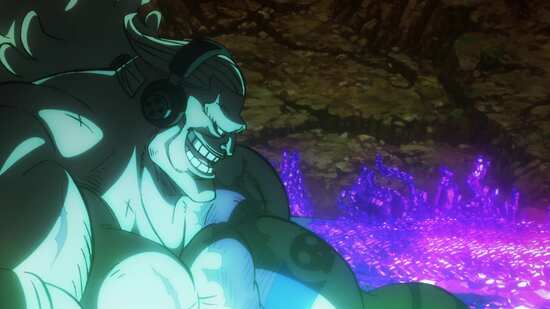 With that in mind, you won’t be shocked to learn that Stampede’s story is really quite simple, and akin to most of the One Piece filler movies and stories that you might have seen over the years. The Straw Hats arrive at a location or venue with a certain intention, but a villainous character will appear from behind the scenes with a nefarious plan, and thus will a lengthy action sequence be contrived where Luffy will fight the villain in a constantly one-upping way, eventually pulling out his best moves to be victorious. By this point in the franchise, Luffy’s found his ‘Fourth Gear’ so his fight sequences are even more impactful. 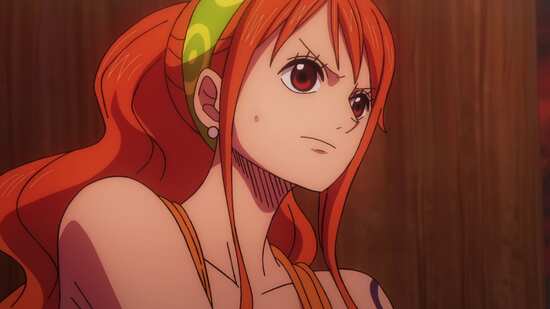 This film’s antagonist is Douglas Bullet, an individualist pirate who used to sail with Gol D. Roger, but who has spent the last few years languishing in Impel Down prison. He’s so bad-ass that when Edward Teach was liberating and recruiting his crew, he didn’t liberate Bullet. Only Bullet is now free and offended by this new age of pirates, defined by friendship and teamwork (most exemplified by the Straw Hats) and he’s determined to bring back self-reliance and individual strength by defeating and destroying everyone else. 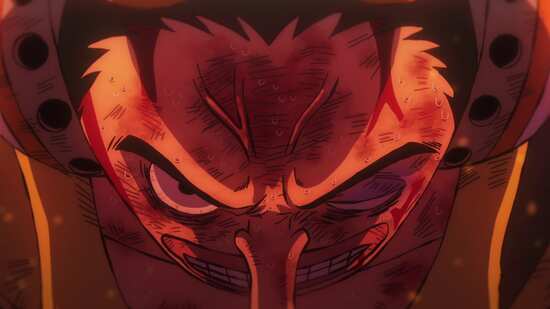 It’s a complete contrivance, but the real joy in One Piece Stampede comes in seeing that 20 year legacy on screen, revisiting old characters, seeing familiar faces, and there are plenty of delightful character comedy moments. If you remember how tacky James Bond’s anniversary movie Die Another Day was, then One Piece Stampede is elegant in comparison. But, the contrivance doesn’t help the weakness in the story, and these epic, mountain shattering battles aren’t at all interesting past ten minutes. You need a break from the noise, and the TV series can get away with it thanks to the inherent episodic nature of the storytelling. Here the movie has you trapped for 102 minutes, and if half that run time is devoted to characters beating the snot out of each other, then One Piece Stampede could be the loudest cure for insomnia. 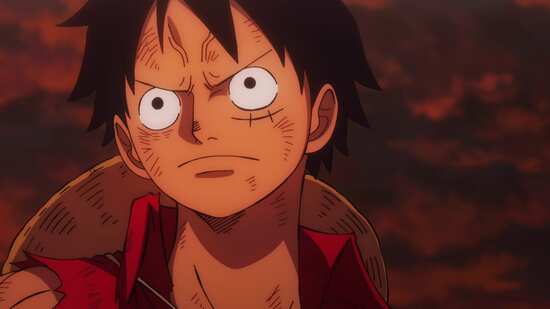 It’s not as good as some of the other One Piece movies, and the superlative One Piece Film Gold is still conspicuously absent from UK shop shelves. But as a celebration of the anime, One Piece Stampede has enough entertainment value to make it worthwhile.