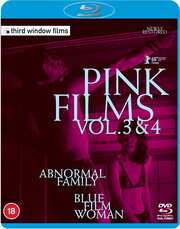 I didn’t have the best of experiences with Pink Films Volumes 1 & 2 when it was released here by Third Window Films a couple of months ago. I did state right off the bat that this isn’t my genre of choice, and while I did find something aesthetically intriguing about Inflatable Doll of the Wastelands, I just couldn’t find a way into Gushing Prayer. When the Volumes 3 & 4 release showed up, I wasn’t initially inclined to watch it, let alone review it. Then I read the blurb to Abnormal Family. 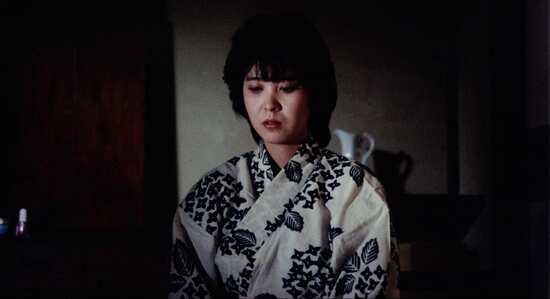 Pink Cinema is an interesting phenomenon, dating from that era when a degree of permissiveness was creeping into entertainment, but fleetingly so. Sex in entertainment existed, but it was restricted and moderated. In the UK in the sixties, that pretty much meant sex comedies (or health and fitness documentaries as lampooned in Carry on Camping). In Japan, with a stricter enforcement of censorship in film, that meant a lot more creativity had to be applied when making sexually provocative content. You get dramas, thrillers, and exploitation movies with a greater emphasis on story, even if there has to be a requisite proportion of nudity and sexual content. These films can be just as provocative intellectually and emotionally. 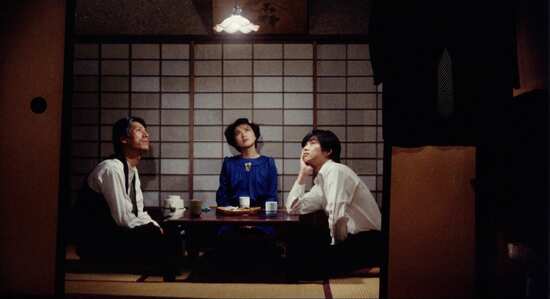 In their next release of Pink Films, Third Window are releasing Abnormal Family (1984) 63 mins, and Blue Film Woman (1969) 77 mins. You get two discs in a BD Amaray case, one on each inner face, with the films repeated across DVD and BD. The inner sleeve offers film synopses and director biographies. 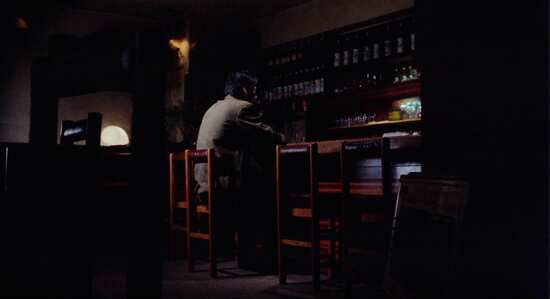 Also with this release is a very useful extra feature; Pink Thrills: Jasper Sharp on Pink Eiga which lasts 34:22. This is an informative piece from the film historian which places the Pink Cinema phenomenon in context, and looks into the history of the genre. 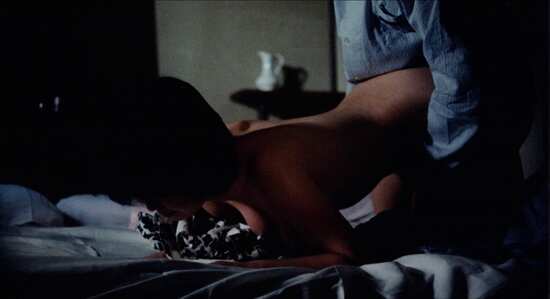 Yuriko is a new bride, moving in with her husband Koichi and his family, his father Shukichi, his younger brother Kazuo, and his sister Akiko. The nervousness of a bride on her first night with her husband quickly fades, but in a house as intimate as this, the rest of the family are left to commentate on the new bride’s performance. But this is a family with issues. Shukichi is forever seeing his late wife in the women he encounters. Akiko is tired of living up to her family’s expectations, and Yuriko quickly learns that Koichi has a fetish for S&M which she’s ill-equipped for. 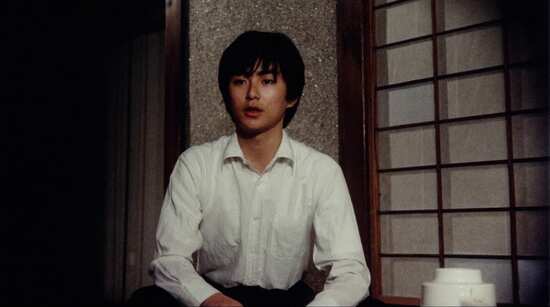 Abnormal Family gets a 1.85:1 widescreen 1080p transfer with the audio in DTS-HD MA 2.0 Japanese format with optional English and German subtitles (depending on which menu you choose). These films have been restored for the Blu-ray release, and Abnormal Family’s print is stable and clear throughout, offering strong detail and consistent colours. There are a few signs of age though, with flecks on the print and a bit of flicker, but the film is never less than watchable. The audio hasn’t fared quite as well, and age has taken its toll. There is noticeable distortion around any noise, be it speech, music or background noise, a sort of non-verbal whisper. You can tune it out though. The subtitles are accurately timed and free of typos. 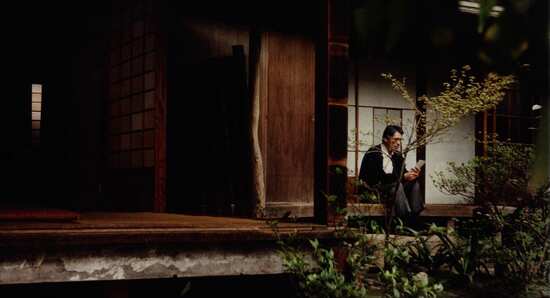 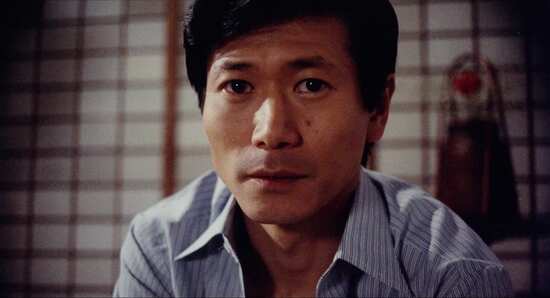 After all, Ozu’s narratives of choice all centred on the Japanese family unit, and how it came together and fell apart in the face of everyday life. Sex and sexuality too is also a part of family life, although the family in this film is hardly conventional. Suo’s approach to directing the film was to film it in the style of Ozu, lots of careful composition, static low cameras, plenty of one shots, and a slow, deliberate, and understated approach to dialogue. It is typical Ozu. 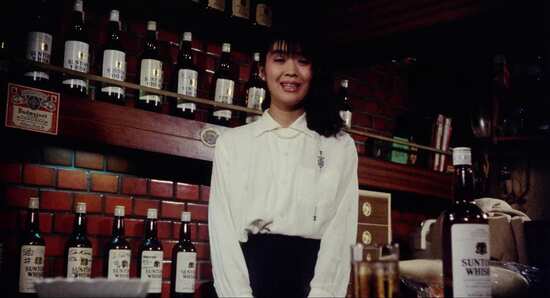 It brings a whole other level to this dysfunctional family, where no one is conventional. Yuriko starts off that way, the nervous, blushing bride on her first night with her husband, shyly lying down next to him, hoping to keep things under the covers, only he’s enthusiastic about getting to know his wife. Meanwhile, the rest of the family are in another room, unable to avoid the noise coming through the walls, commenting on how well she’s fitting into the family. 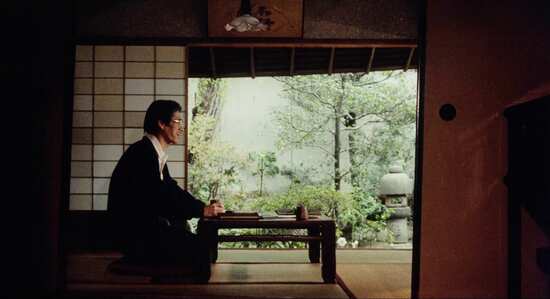 It’s a rapid education for Yuriko, but she’s soon enthusiastic herself, although the penny doesn’t drop straight away with the scratches on her husband’s body, but it isn’t long before Koichi goes too far and introduces the bondage gear. It turns out that Koichi gets his kicks in the arms of another woman, and having been awakened to her sexuality, Yuriko’s soon frustrated at her husband’s absence, and looking elsewhere. And of course the rest of the family have their own issues as well, with Akiko leaving her conventional job and starting work in a sex sauna, and frustrated Kazuo acting up and shoplifting. 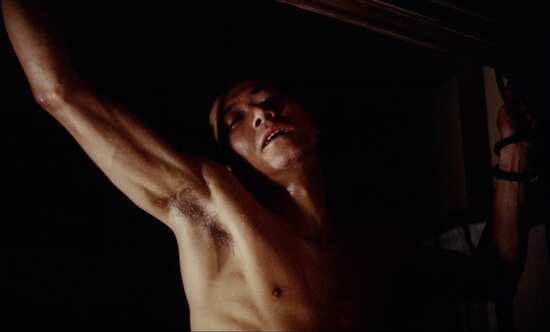 What also took me by surprise was just how explicit the film could get without actually being explicit. The film conforms to all of the constraints of the Japanese censorship, yet at no point are you uncertain about what’s happening on screen. 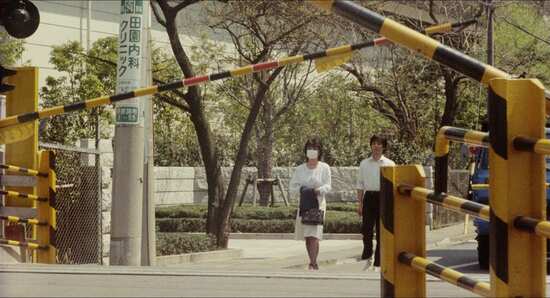 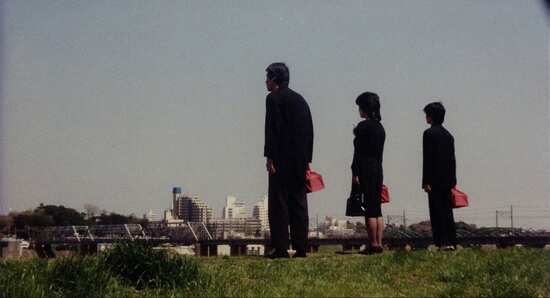 The stock exchange may be a great way to make money, but not for one family. After a phone call reveals that the Sakata family is suddenly in debt, a debt which is due at the end of the month, it leaves the father contemplating suicide. When Uchiyama calls, reminding them of the due date, their wails and pleas fall on deaf ears. He’s not in the mood for forgiveness, but he will extend the repayment agreement, with interest, in exchange for sexual favours from the wife. Only Uchiyama’s demands are too much. The daughter of the family, Mariko comes home to a phone call from the police, telling them of her mother’s death. She swears vengeance against Uchiyama.

It’s an older film, from the tail end of the sixties, and given what you’ll learn about Pink Cinema in the featurette on this disc, it’s a miracle that Blue Film Woman survived at all, but it certainly shows the signs of age more than Abnormal Family. The 2.35:1 1080p transfer is relatively clear and sharp, with good detail, although the anamorphic lensing is felt more often than you’d expect, while focus isn’t always spot on. The detail levels are good, but the print has plenty of signs of age, spots of dirt, hair in the shutter, and faded colour. But it is stable and free of significant damage, and it looks suitably filmic. The DTS-HD 2.0 mono Japanese audio on the other hand has suffered more down the years, and there is significant distortion at higher volumes. This is a film where it looks as if all of the dialogue was looped in post. One thing that certainly caught my attention was the opening title sequence, which owes no little debt to the work of Maurice Binder and the James Bond title sequences, although James Bond was never this raunchy.

I have never seen such a perfect slide from creative brilliance to narrative ignominy as in Blue Film Woman. The film is an exact 45 degree downslope from beginning to end. It’s a film that promises much, and in the end for me it delivered nothing. I did feel that I appreciated it more for the promises it made, than I decried its failing, but taken as a whole, you could say that Blue Film Woman is an average film. It’s nothing like that to experience though.

The James Bond opening credits are coupled with Indian music, heavy on the tabla, while an English poem is recited. This switches to a cacophonous visual burst of the Tokyo Stock Exchange before cutting to a suburban idyll, framed in Persimmon trees, where the family are due to get the dread phone call signalling their fall from social grace. The prospect of the imminent debt throws the father into a suicidal panic, setting up the ominous character of Uchiyama, the loan shark who holds the debt. The lascivious man appears to make an Indecent Proposal, deferring the debt in exchange for sex with the wife.

By this point the film has already slipped from the experimental avant-garde opening credits to the sexual exploitation flick that is nasty but enjoyable. That seems to be confirmed when he offers a further extension on the loan if the woman would now have sex with his addled son, who he keeps locked away. When the phone call comes, and Mariko learns of her mother’s death, she swears vengeance on Uchiyama, and I was at this point expecting the kind of sex and bloody violence that has graced many a cool exploitation flick, hardly high cinema, but invariably satisfying.

Alas, Mariko’s vengeance on Uchiyama turns out to be accomplished by her getting a job and paying off the debt, hardly visceral fun, and not even satisfying. This being a Pink film, there has to be a regular sexual encounter, and with Mariko taking her time to decide to go on the game, they usual involve the women she meets on the way, a co-worker at a nightclub, or a roommate later on. Her sexual awakening comes much later, when she learns just how much a prostitute can earn, and how much more a prostitute can earn by filming her clients and then blackmailing them (hence the title of the film).

But the disappointing thing is that she never really has her vengeance, even if Uchiyama does get a deserving, and ironic exit from the film. Speaking of exits, the end of the film is a total non sequitur. I have no idea why the film ends in the way that it does, and it isn’t the kind of ambiguous ending that leaves you thoughtful and contemplative. It’s the sort of ‘out of the blue’ ending that gets tacked on for want of a better way to conclude the film.

I still may not be an aficionado of Pink cinema, and am probably not the correct person to be reviewing these films, but I certainly found a lot more to appreciate with this second collection from Third Window Films. As a pastiche of the works of Yasujiro Ozu, Abnormal Family simply has to be seen; it is a masterful and spot on parody. Blue Film Woman on the other hand actually excels with its opening, and the promise it has in its first act. I just felt that it drifted away into incoherence by its conclusion, which was disappointing to say the least.