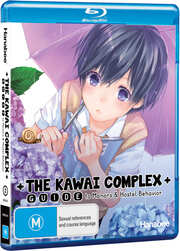 Review for The Kawai Complex Guide to Manors & Hostel Behavior

Anime distributors can be infuriating at the best of times. It’s down to the size of these companies and the size of the market of course, but even the most savvy and clued up customer can be caught out by foibles in release schedules. We’re in the middle of the pandemic lockdown as I type, which you might think isn’t the best time for a new product launch, when finances are tight, and prospects are uncertain. But one company did indeed launch a new series release for pre-order, with three expensive part releases, supplemented by significantly discounted (but still expensive for a one time spend) complete series bundles. Now I want to see the series, but I’ve never watched it before, which makes a blind buy more of a risk. I need time in these situations to weigh up whether it’s worth my while. The first complete collection bundle went on pre-order and sold out in two minutes. The second bundle, without the physical goodies, sold out in a couple of hours. You might say it’s my fault for wavering, and now that only the part releases are left, which will cost twice as much, I only have myself to blame. 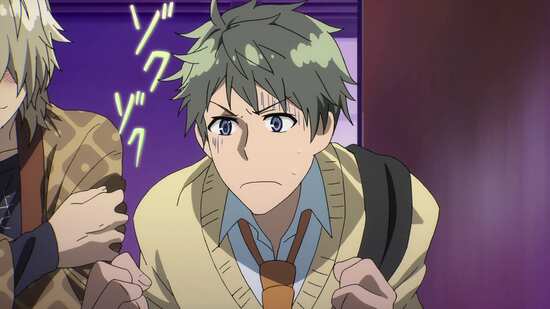 I probably only have myself to blame with The Kawai Complex Guide to Manors and Hostel Behavior as well. I loved the show when I watched it streamed; it’s a beautifully animated romantic comedy, and I desperately wanted it on Blu-ray. But when Sentai Filmworks released it in the US, they released it DVD only. I wasn’t going to miss out, if that’s the only way that I could get it, so the DVD is what I bought. And then sixteen months later, Sentai released a Region A locked Blu-ray. And in Australia, Hanabee Entertainment had waited for this so that they could release the show on both formats simultaneously. I can’t win. I either get penalised for waiting, or I get penalised for not waiting. Anyway, here I am, watching Hanabee’s Blu-ray of The Kawai Complex Guide to Manors and Hostel Behavior for my first revisit to the show. 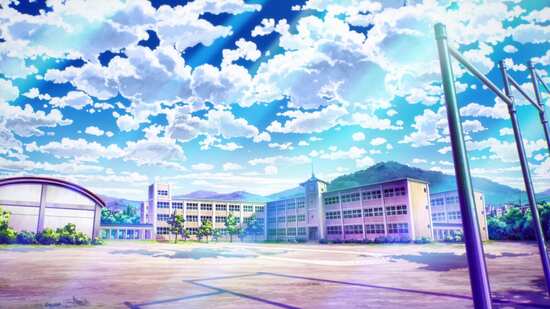 Usa Kazunari’s been looking forward to this moment. He’s starting high school, which means that he can put the nightmare of middle school behind him, and start fresh. That also means that he might just get the perfect girlfriend. Yes, just like that quiet, bookish type, seated in an air of elegant mystery in the school library. This also means that with his parents being reassigned for work, he can finally get a place of his own. He’s got a room all to himself at the Kawai Complex. His new life is about to begin. 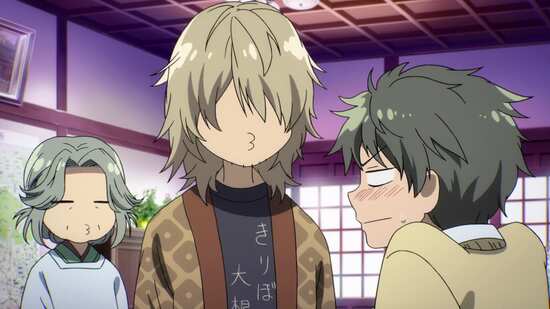 Except that it’s not just his room, he’s actually sharing with Shirosaki, the masochist pervert, the guy who just got arrested for loitering around an elementary school (although he probably just did that so he could get handcuffed). The quirky landlady Sumiko hasn’t been too forthcoming about the other residents either. Mayumi Nishikino’s a hard-working girl who has no luck in love, and has a tendency to drown her sorrows, taking out her frustrations on virginal high school boys, while Sayaka Watanabe is a college girl who likes to torment people with a wicked tongue. This is not the kind of healthy, independent lifestyle Usa was looking for, and he was on the way out of the Kawai Complex, when the final resident walked in, great-niece of the landlady Ritsu Kawai, who just happens to be that bookish girl of elegant mystery from the school library. Maybe Usa will try this dormitory living on for size after all. 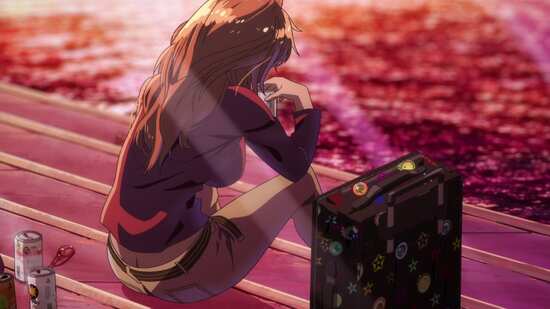 12 episodes plus the OVA are presented across two discs from Sentai Filmworks.

Disc 2
10. You Could Just Ignore It
11. Don’t Have Any Friends
12. I Want to Get Closer
OVA. Special Edition: First Time 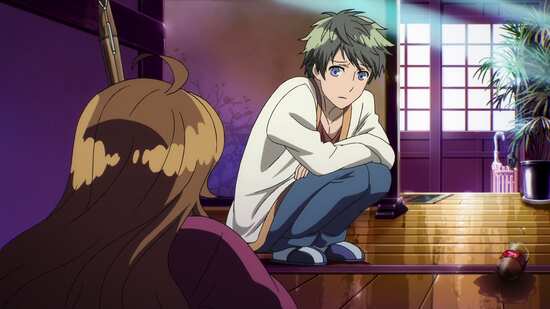 Kawai Complex gets a stunning 1.78:1 widescreen 1080p transfer. The image is clear and sharp throughout, and the show’s gorgeous colour palette comes across to pleasing effect. Studio Brains Base do the heavy lifting with the animation, and they’ve created an anime that revels in the play of light, reflecting the time of day, and the angle of the sun. Clouds can be wondrously pink-tinged, it seems every scene has rays of light filtering across the image, and it all evokes a sense of nostalgia. On Blu-ray the clarity and vivid colours are on a completely different level to the DVD. It now looks as if you’re watching a Makoto Shinkai film, when it comes to the way the show plays with light and colour. The quality also comes across in the world design and the setting, as well as the character designs, which are appealing and individual, apt at displaying emotion in the subtler scenes, and then easily dropping into deformed appearance for some heavy comedy. 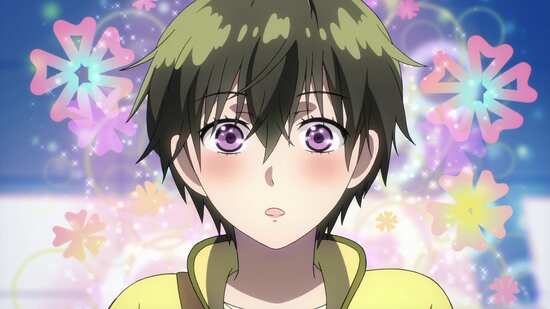 The sole audio track on this release is the DTS-HD MA 2.0 Stereo Japanese track, with translated English subtitles, locked during playback. This release looks like the Sentai release, but with a twist in re-authoring. In this case, the subtitles look like the Sentai subs, but coloured white. The audio is fine, the dialogue clear throughout, the stereo giving the show a nice bit of space for the action sequences, the ambience and the music, while the show gets a nice set of theme songs to complement it. One thing of note is that Kana Hanazawa plays the role of Ritsu pretty much against type. She more usually voices the bubbly, outgoing characters, but Ritsu is by nature soft-spoken and introverted. It’s an engaging performance though. The subtitles are timed accurately and are free of typos. 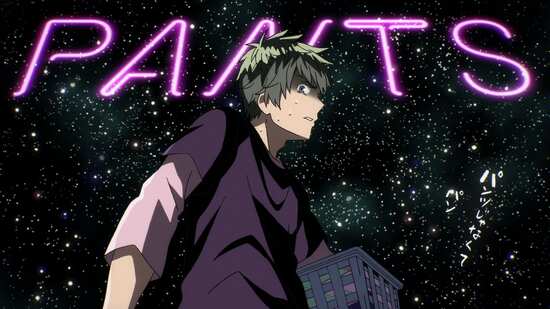 You get two discs in a BD Amaray style case, one on a central hinged panel, and one held at the back of the case. The discs present their content with static menus, and each episode is followed by a translated English credit scroll. There is an episode listing on the inner sleeve.

The extras are on disc 2. 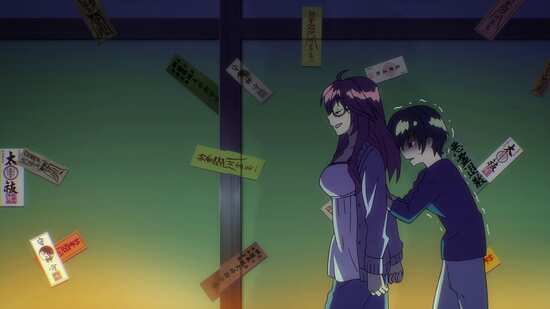 The Commercial Bumpers are those images which lead in and out of advertisement breaks, and here you get to see them in a 2:13 slideshow and they look great in HD.

You get 3 clean opening animations, and 2 textless closings.

There are trailers for RE-KAN!, Busou Shinki, and Chaika the Coffin Princess – Avenging Battle. 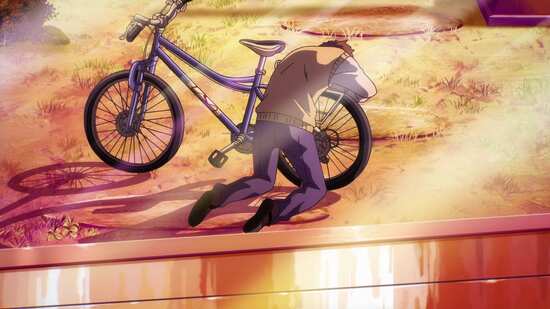 The Kawai Complex is a comedy that I fell in love with when I watched it as it was streamed, and contrary to my usual experience with anime comedies, it’s just as much fun the second and the third time around. A big part of it is that I am drawn to bookish characters; one reason why Read or Die is one of my all-time favourites. I’m prone to lose myself in the pages of a book at the best of times, and seeing a protagonist in a show indulging the same passion is something I can relate to. Ritsu Kawai can usually be found behind a book, whether at home, or at school, or walking between the two locations. It’s the first semblance of closeness Usa Kazunari has with his dream girl, steering for her on the way to and from school, keeping her out of traffic and making sure she avoids lampposts. 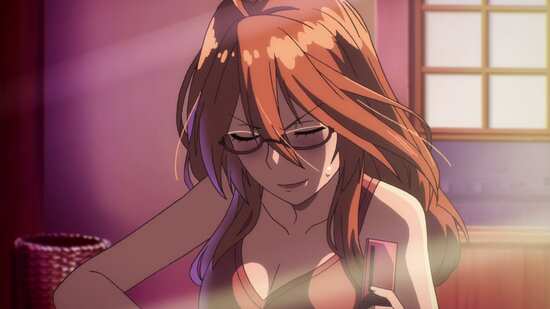 It is a romantic comedy then, but not quite the usual anime romantic comedy. Usa may have dreams for a simple life when he starts living alone, but he certainly picks the wrong girl to fall for when it comes to those aims. Ritsu loves reading to be sure, and she’s very pleasant to gaze upon, but she’s shy, introverted, and antisocial, not the kind of girl that you can easily talk to. Usa might have a better shot at getting to know her when he learns that they’ll be living under the same roof, but he hasn’t counted on the rest of his housemates. He shares a room with Shiro, a masochist that makes Usa look perverted merely by association. Mayumi’s a woman who certainly has the looks, but she’s constantly unlucky in love, prone to drowning her sorrows, and doesn’t censor her language to appear ladylike. Usa’s a prime virginal target for her tactile sense of humour. 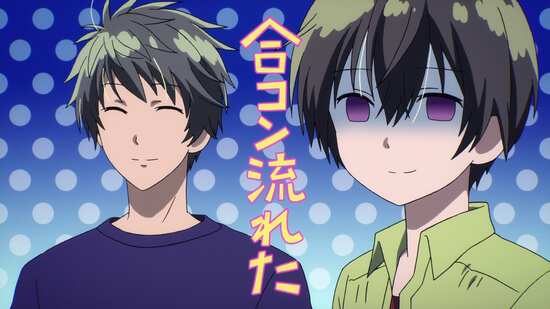 While she can dish it out, she can’t take it, which is fun for college girl Sayaka, whose major hobby is messing with people’s heads, and she minors in groping Mayumi. She’s a total sadist, which suits Shiro down to the ground. The landlady Sumiko may seem respectable enough, but she can be slyly sadistic and playful as well. And it’s with this audience watching, that Usa wants to get to know Ritsu better. This audience likes to get interactive too. Ritsu’s love of books gets Usa reading as well, and this might be something that they can share, except a comment from Mayumi might get Ritsu flustered and racing for the safety of her room, or a comment from Shiro might get her seeing Usa in the wrong light, resetting their relationship back to square one. It’s an uphill struggle all the way. 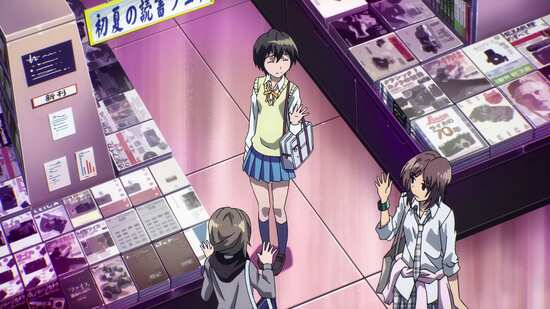 The series unfolds in a series of vignettes and mini-stories really, half an episode long for each, almost a gag format, with a set-up and punchline. While Ritsu is adorable, and Usa’s growing affection for her charming in its innocence, the real joy in the show comes from the interaction of all of the characters, as they by turns help and hinder Usa and Ritsu’s friendship grow, for if they all recognise one thing, it’s that Ritsu’s introversion borders on the isolation, and Usa is the first person that she’s really connected with on any level, and that relationships become stronger through adversity. There are other stories as well, Mayumi’s faltering love life rears its head on several occasions, while they finally learn of evil Sayaka’s sole weakness when a friend from her past pays her a visit. Shiro gets an unlikely admirer too, an elementary school girl named Chinatsu, which has alarm bells ringing for all, although Shiro has faith that she can be an adept sadist when she grows up. 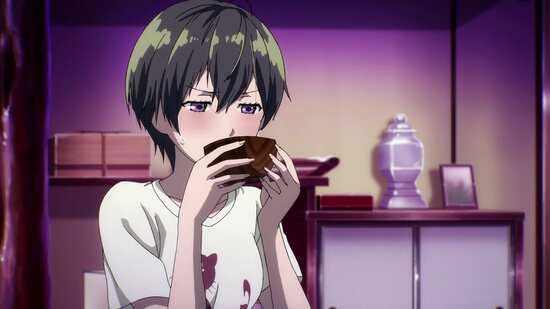 Kawai Complex is a great comedy anime, offering the usual slapstick and wordplay antics, but also doing a rich line in character and relationship comedy, and with the double act of Sayaka and Mayumi, it can be deliciously ribald as well. Mayumi in particular doesn’t spare anyone’s blushes. Usually when it comes to upgrading TV anime from DVD to Blu it’s a matter of incremental improvements in image quality, but with Kawai Complex the differences are immediately apparent. The crispness of the line art and the fantastically vivid colours make this an essential upgrade. I’m just so glad that a Region B option became available from Australia, as it still baffles me, when we get countless Isekai shows each month, that something as charming as this romantic comedy has made it to the UK as yet.