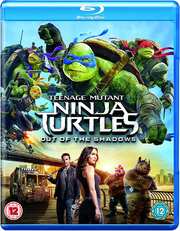 Teenage Mutant Ninja Turtles: Out of the Shadows (Blu-ray Details) 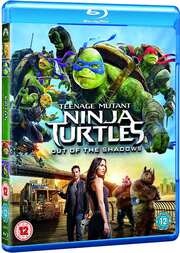 Review for Teenage Mutant Ninja Turtles: Out of the Shadows

There may be a malaise, or even an illness affecting the middle-aged. We appear to have a need to hold onto our childhoods that previous generations never indulged in. Why else would our entertainment remain stuck in the eighties and nineties for inspiration? Movies keep being remade, franchises keep being dusted off, which makes me worry for the youngsters of today, struck with the thought that they are effectively relying on the same stories that we did for entertainment, that they are denied the chances to find something original and new. I remember enjoying the Teenage Mutant “Hero” Turtles when I was a kid; it was a fun cartoon unlike anything I had seen before. Then in 1990, the first feature film came around, and on the strength of the cartoon, and a catchy soundtrack including Technotronic and Partners in Kryme, I actually went and saw it in the cinema. The animatronic turtle suits blew me away; Jim Henson’s workshop worked miracles in re-creating the cartoon characters in live action. But the film wasn’t up to much, and I was never tempted to watch the two sequels. Last year I spotted this in a bargain bucket. It turns out that Teenage Mutant Ninja Turtles – Out of the Shadows is the 2016 sequel to a 2014 reboot to the film franchise. This time, the kung-fu reptiles are CGI.

The Ninja Turtles may have defeated the villainous Shredder, but they’re not ready for the public eye just yet. Instead, they agreed that cameraman Vernon Fenwick would take the credit, although he’s been living life high on the hog ever since. But now, Shredder is about to be transferred to another prison, and reporter April O’Neil has discovered that renowned scientist Baxter Stockman is actually in league with Shredder and is planning to free him during the transfer. Along with Shredder in the van are thugs Bebop and Rocksteady, while a certain Casey Jones is the corrections officer.

Casey isn’t exactly believed when he tries to explain that Shredder was teleported away during the escape engineered by the Foot Clan, almost thwarted by a garbage truck firing manhole covers. He has to go it alone trying to clear his reputation. But it turns out that Baxter Stockman’s teleportation device didn’t work as intended, and Shredder was pulled into a different dimension, where an alien creature called Krang is plotting the invasion and downfall of Earth. As for Leonardo, Donatello, Raphael and Michelangelo, they’re having creative differences...

Out of the Shadows gets a 2.40:1 widescreen 1080p presentation with Dolby Atmos English, along with DD 5.1 French, German, Italian, Japanese, Spanish, and English Audio Descriptive. Subtitles are available in these languages plus Dutch, Danish, Finnish, Norwegian, and Swedish. The audio is excellent, immersive and really bringing out the best in the action, while keeping the dialogue clear. There is a nice pop soundtrack to the movie, while the classic cartoon theme song gets a reworking for the end credits. The image quality is similarly impressive, sharp and clear with no signs of compression or banding. Motion is smooth and detail levels are excellent. The CGI characters in the film are impressive, accomplished well and expressive of emotion, while keeping them more cartoon-like and stylised. These aren’t hyper-realistic extrapolations of the characters which might have edged the film in a different, more adult direction. Teenage Mutant Ninja Turtles remembers and keeps in mind its origins and its target audience with its visuals. Having said that, I did feel that these turtles looked less like the turtles from the cartoons I remember. Donatello in particular looked more frog-like.

You get one disc in a BD Amaray wrapped in an o-card slipcover. There is an expired Digital Copy of the film that you can probably no longer access. The disc boots to animated comic book menus.

On the disc you’ll find the following featurettes.

And finally there are three Deleted Scenes running to 4:54 in total.

I was pleasantly surprised with Teenage Mutant Ninja Turtles – Out of the Shadows. It was a whole lot more fun, and a lot more entertaining than I expected, given the last time I watched a Turtles movie. But I do actually think that this film was aimed at me, or at least people of my generation who have a familiarity with the original cartoon show. Certainly, that’s all you really need to watch this film, and in fact it stands well enough alone that I didn’t feel lost, not having seen the 2014 ‘original’. The story works well, the characters are fun, and it’s an enjoyable mix of action and comedy. It’s certainly not as dark as that 1990 movie, while it plays heavily on nostalgia for the comic books and original cartoon. It’s no surprise that the man behind the Transformers franchise, Michael Bay served as producer on this nostalgia-fest.

It turns out that actors wearing mo-cap suits and mo-cap shells can be a lot more expressive and give better performances than actors wearing radio controlled animatronic rigs, and while absolute realism may not have been the goal with the CGI, the emotional performances of the actors comes across through the animation perfectly well. The characters of the Turtles, Bebop & Rocksteady, and the other CG creations in the film come across strongly, and this really helps to sell the story. For the first time in live-action, I really felt that I was watching Leonardo, Donatello, Raphael, and Michelangelo.

The story is so iconic as well. Shredder gets loose from confinement, gets pulled into another dimension where he encounters Krang, and teams up with him to create a portal back into our world, where the Technodrome will come through and Krang will rule the world. The purple ooze is key to this plan, which Shredder uses to mutate thug and punk Bebop and Rocksteady into the rhino and warthog that we know so well. And Krang is a purple tentacle brain thing that lives in the belly of a robot.

April O’Neil is the plucky reporter, Stephen Amell is a delight as Casey Jones, and for the first time ever, I felt that I was watching The Teenage Mutant Ninja Turtles cartoon turned live action. I had the same kind of fun that I remember having as a teenager. All of this is great for middle-aged nostalgics, but I do wonder if young audiences react in the same way to a thirty year old comic book franchise. Out of the Shadows does have a small problem with its tone at times, veering ever so closely to the childish, throwing in fart gags, and the Stockman character played a little too goofily for live-action. But I have to say that this re-invention of the Turtles franchise works a whole lot better than the original live action movies.