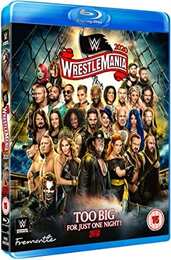 Wrestlemania is usually an amazing experience where thousands of the WWE Universe jampack an arena and cheer, boo and have so much fun. Not this time. Obviously, with the Covid-19 situation this was a very unique show split into two nights and I want to say that this felt like Wrestlemania, but something was missing, and not just the audience.

Hosted by NFL legend (supposedly) Rob Gronkowski spent most of the time having fun with the 24/7 Title, but that was really all he brought to the event and as I had no idea who he was it wasn't anything special.

The Kabuki Warriors against Alexa Bliss and Nikki Cross for the WWE Women's Tag Team Championship was a great match. All four were amazing and I love both teams. King Corbin against Elias was fine, but nothing special. I'm not sure whether Elias works as a Face, but the absence of an audience hurt him.

One of the most anticipated matches was The Man Becky Lynch against Shayna Baszler for the Raw Women's Championship and it was certainly a good match. However, after Baszler's dominance in the Royal Rumble and Elimination Chamber this match felt a little underwhelming and should have stolen the show, but didn't.

The Intercontinental Championship Match between Sami Zayn and Daniel Bryan was hugely disappointing and this was such a shame as I wanted this to be the match to show that Sami Zayn isn't just a great talker and when you look back at his career and who he was working with, this should have been a home run.

Due to Covid-19 issues the SmackDown Tag Team Championship Triple Threat Ladder Match had to be reduced to one member from each team and this worked out amazingly. All three: Kofi Kingston, John Morrison and Jimmy Uso just hit this match out of the park and was one of the best matches from either nights.

This was followed by a fantastic match between Seth Rollins and Kevin Owens. Now it is true that it is not a match that I will remember, but for what it is I can say that I enjoyed watching this match again and both worked well with each other.

The Universal Championship Match between Goldberg and Braun Strowman was exactly what I expected to be. I am glad that they finally pulled the trigger on giving Strowman the win and I think it delivered the action you would predict from these two.

The first night ended with the Boneyard Match between AJ Styles and Undertaker...

What did I just see?

I don't even know what I am supposed to say, what was presented was a twenty-minute mini-movie featuring AJ encountering the Dead Man in a variety of mad and I do mean mad spots. If anyone has ever seen the infamous Final Deletion created by Matt and Jeff Hardy you will know what to expect. It was sheer madness and upon repeat viewing I still have no idea and will not be something I will be watching again.

The second night started with an odd match with Charlotte Flair cashing in her Royal Rumble win to face NXT Women's Champion Rhes Ripley. Now, I have made no bones about the fact that I am not a fan of Charlotte. I find her overpushed and at times it is because of her last name. This is a shame as she is one of the most gifted female wrestlers in the business, but I really thought this should have been an opportunity to put over Ripley. It was a good match, just not the ending I expected.

The next two matches really should have been part of the Kickoff show. Aleister Black and Bobby Lashley was fine, but nothing special. Dolph Ziggler against Otis would have been better with a stipulation of some kind, but it did have a very good ending.

The Last Man Standing Match between Edge and Randy Orton was far, far, far too long. In this world of PG Wrestling and no blood this match went on far too long for what it was. It was great to see Edge again and they both work well together, but this match seemed to drag on and on until it felt like nothing was going to end the match.

The RAW Tag Team Championship Match between The Street Profits against Austin Theory and Angel Garza was a so so match that did nothing for anyone and again on any other show would have been on the Kickoff show without a doubt.

The Fatal 5-Way SmackDown Women's Championship Sasha Banks, Lacey Evans,. Tamina and Naomi against. Bayley was a great match. I like that it was an elimination style and all five had their moments. The tension of whether Sasha Banks would turn on Bayley (or vice versa) made the match a lot more interesting.

Well if I thought the Boneyard Match was insane we then came to the Firefly Fun House Match. This pitted John Cena against 'The Fiend' Bray Wyatt and was a surreal Twilight Zone like segment and again felt like someone in WWE wanted to create a horror film. This was truly creepy and felt like what would happen if WWE went to the Sam Raimi Evil Dead world. This was more entertaining than the Boneyard match, but not by much. If you have a younger child watching you may want to watch this first before you let them watch this.

The event ended in a fantastic way with the WWE giving us exactly what we had been asking for for months. The WWE Championship Match between Brock Lesnar and Drew McIntyre was a great match with some hard hitting moments from both, but I am so glad that I left the event happy with what I had just seen and it is often rare for me to say that.

There are a number of extra features including both Kickoff Matches. Cesaro against Drew Gulak was fine, but nothing special as was Natalya against Liv Morgan. I can understand why they were on the Kickoff show as neither meant much in the grand scheme of things. Also included is the defence of the new WWE Championship which was odd, but a good match in general.

Also included are fourteen extra segmenst from Raw, NXT and Smackdown. These were mainly to build up the Brock Lesnar/Drew McIntyre , Edge and Orton and Undertaker and AJ matches all with three segments which did well to build up these feuds. The rest are a mix with one for John Cena and The Fiend, though I do wish they had included more, two from Charlotte and Ripley and one from Shayna Baszler and Becky Lynch which again could have done with a few more.

Considering how much a Blu-ray can hold it is a shame that more wasn't included as it would have been interesting to have heard more about how the event was brought together and maybe Behind the Scenes from the Boneyard and Funhouse matches.

As it is, Wrestlemania 36 will go down as the event which was all about the performances and not about the spectacle. Gone are the huge pyrotechnics, the celebrities singing, the massive roar of the crowd and the glitz and glamour that the Showcase of the Immortals is known for. Instead, we have a number of great matches and a number of matches that I probably will never watch again. This is not a bad show it just doesn't feel like a Wrestlemania.

I suppose I should applaud WWE for what they were able to achieve despite all the problems and I will say it is certainly unlike any show I have ever watched. Will we remember it as the greatest Wrestlemania of all time? Probably not. Is it worth watching? In a time when finding things to entertain you is hard I would say this is a nice distraction from the world at the moment and that can never be a bad thing.