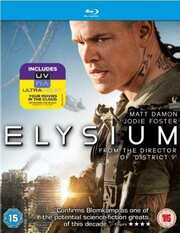 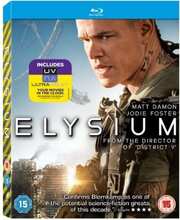 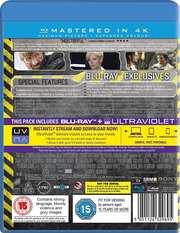 I don’t think I’ll ever catch up to all the cool Hollywood movies that I’ve missed at this point, although that won’t stop me from trying. But it does feel like I’m chasing after the next big thing when they’ve already become yesterday’s news. Neill Blomkamp is the visionary director behind District 9, but having made that and two other features, Elysium and Chappie, has limited his output to short films. All I knew about Blomkamp before this was that he’s behind the Alien movie that everyone wanted to see made, but we got Prometheus and Alien Covenant instead. I do have District 9 on my unwatched pile, but I thought I’d start with something a little more commercial instead, the bald Matt Damon movie, Elysium.

The future of Earth in 2154 isn’t all that rosy. Pollution and over-population have rendered most habitable areas little more than slums. But for the rich, that’s not a problem, as they have all relocated to a vast orbiting habitat called Elysium, where they alone have access to the best technology and the finest living standards. Since he was a boy in an LA orphanage, Max has dreamed of going to Elysium with his childhood friend Frey, but growing up didn’t quite match his dreams. He’s on the straight and narrow now, working a legitimate job to earn enough for a ticket; not that the elite in Elysium actually allow immigration. When an accident at work leaves Max with a lethal dose of radiation, and just five days to live, he decides that he will do anything to get to Elysium, and the medical technology that will save his life.

The film is presented in 2.40:1 widescreen 1080p with the choice between DTS-HD MA 7.1 Surround English, 5.1 Surround French and German, and DD 5.1 Surround English, and a separate English Audio Descriptive track. There are subtitles in these languages plus Arabic, Dutch, Hindi, Polish and Turkish. The film looks impeccable. The action and effects are flawless, the image is clear and sharp with great, consistent colours, and there’s no issue with compression or the like. The effects are accomplished in a way that make them integral to the story, rather than standing out as obvious money shots, and the contrast between the slum Earth and elite Elysium is effectively realised. The space station too is a wonderful realisation of a great sci-fi concept. The audio lives up to that level of visual excellence, immersing you in an action packed world, and really making good use of the sound stage. One issue is that the incidental music sounds like rather generic action movie dirge, but there is a significant ADR issue that might be a deal breaker for some.

You get one disc in a BD Amaray, and a UV code that has long since expired. The disc boots to a static menu where you can find the following extras.

Visions of 2154, an interactive presentation that looks at imagery, art, and special effects from the film. You click and choose from menus, but all in all there is 20 minutes of footage to go with this extra.

Collaboration: Crafting the Performances in Elysium (13:!8)

In Support of Story: The Visual Effects of Elysium (10:34)

Engineering Utopia: Creating a Society in the Sky (11:43)

And finally there is a generic Sony Blu-ray trailer, and trailers for White House Down, This is the End, and After Earth.

Elysium is a great sci-fi action thriller, with an engaging story, brilliant special effects, interesting characters, and it unfolds at a relentless pace. It presents a vision of the future that is unique and specific, and does the simple thing that many other films neglect; the action and effects serve the story and the characters, and not the other way around. It is however, completely unoriginal; adds nothing new to the sci-fi genre, and will remind you of many other films along the way. None of that is a bad thing as long as the film entertains, and Elysium very much entertains.

The most obvious similarity to sci-fi films past is the two-tier society, the have-not drudge workers below, and the pampered elite above, a sci-fi staple since the definitive Metropolis, and seen again and again in films all the way up to Battle Angel Alita. In Elysium, the definition is even more literal, with the rich elite orbiting way above in a space station paradise, modelled on the flights of fancy that you’d read in Niven or Banks sci-fi. Down below, Earth is a slum, and people are either blue collar workers slaving away for the corporations run from above, they’re criminals, or just unemployed. Down below, people still die of the slightest ailments, while up above, there is medical technology that can rebuild bodies from the atom up, as long as there is brain function remaining, and every illness has a cure.

That’s the driver behind the plot. People on Earth want to get to Elysium for better lives, but the terminally ill also want their lives saved. For the protagonist Max, who’s been dreaming of Elysium all his life, when one of those Elysium run corporations is responsible for him getting a lethal radiation dose, he becomes determined to get up there and save his own life, and that changes his outlook on the world. Meanwhile there are those in Elysium that will do anything to keep their paradise from being tainted by the unclean, and so the heroes and villains of this movie are defined.

Structurally the film plays out a lot like Total Recall. Just like Doug Quaid, Max is a simple blue collar worker. He has to get off world initially for wholly self-serving reasons, but over the course of his quest, he becomes a figure for the ‘resistance’, the one man who can literally change the world. Throw in an bit of Johnny Mnemonic as a plot element (once again, the maguffin is in the protagonist’s head), and a deranged maniac antagonist in Kruger, a mercenary that makes Total Recall’s Richter look like a charity aid worker, and let’s just say the similarities are a little too obvious.

It’s in this film’s Cohagen that the weakness lies, and Jodie Foster’s Delacourt is the one part of the film that kept twanging the suspenders of my disbelief. The character is as competent a power-hungry despot as should be, a security minister with ambitions way above her station, and a bloodthirsty attitude to career progression. The problem is that she’s overdubbed, and Jodie Foster’s ADR skills in this film are lacking. Apparently her original accent in the film didn’t test well, and she had to record most of her lines again. And whenever she speaks, you’ll be wondering why the audio is out of sync.

That’s a real shame, as in every other respect, Elysium is a well made, entertaining, if unoriginal sci-fi actioner. It works just as well as the original Total Recall, and is just as much fun. This Blu-ray is as competently put together as you’ll have come to expect at this point, with great audio and video, and with a fair set of extras. But it’s rare to see a film diminished by just one element of post-production.