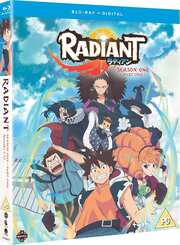 Review for RADIANT: Season One Part One

There was a time when the anime industry in the West was radically limited in what was released. Even the US would just skim the surface of the annual Japanese output, and we in the UK would get just a fraction of that. Things are so much more different now. Thanks to streaming services, it’s the rare series that we don’t get to see, and when it comes to home video releases, we get a fair portion of what is released each season. In many ways this is an improvement, indicating that the anime fan base in the west is now large enough to support such an output. In one way however, it’s not so good. 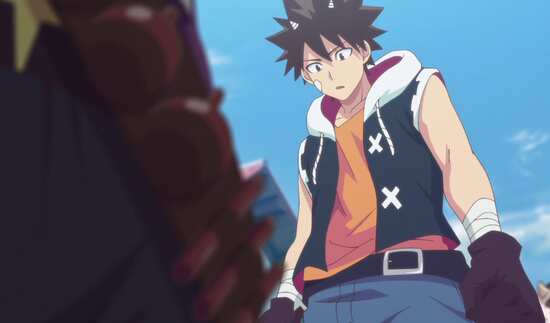 It’s the long running anime series of course. Every year, manga creators compete to become the next Kishimoto or Oda, to bring us the next One Piece or Naruto. Not all of these manga survive the brutal business of publication, and not all of those get anime adaptations, and then again, not all of those will get a full serial adaptation of the source material, and on top of that, not all of those will succeed to sell through in the West... let alone the UK. The problem being that with the current immediacy of the anime distribution business in the West, and the sheer number of shows being released here now, we get a whole lot of also-rans along with the new hit shows. Back when Naruto and One Piece came to the UK, we got the occasional D. Gray Man and MAR. But now, it seems like every other show is a Twin Star Exorcists. It feels like a lot more of a gamble to take a chance on a long running anime show. 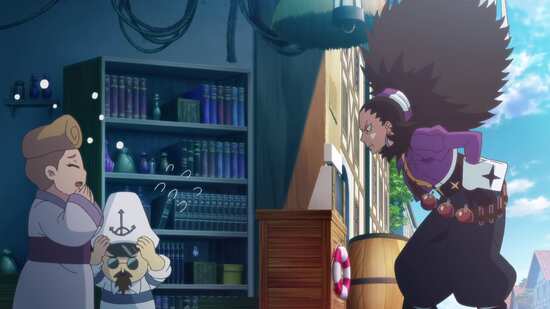 Roll up, roll up! The next, next big thing is here, this time based on a French manga from creator Tony Valente. It’s got the plucky young hero with special abilities, born into a world full of adversity and adventure that will test those strengths. In other words, it’s another shonen show. Will this be the next My Hero Academia, or will it fizzle out like Tokyo Ghoul? Place your bets! 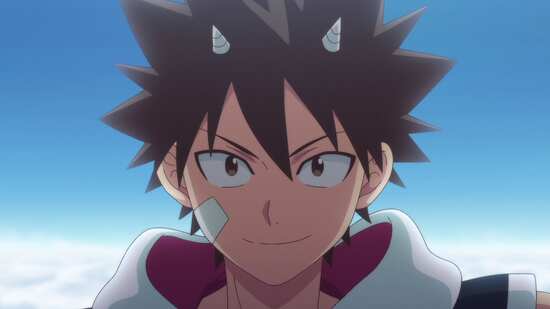 Seth is a young sorcerer in training. This isn’t a good thing in this world, a world tainted by the scourge of Fantasia, magical power. This power is initially manifest in the Nemesis, monsters that appear and ravage the human world. Any humans that survive are invariably polluted with this power, cursed in some way, but now able to wield Fantasia as sorcerers. But the rest of humanity invariably fears, hates, and shuns them. On top of that, the Inquisition hunts unregistered sorcerers down. And in this world, Seth is a happy-go-lucky trainee sorcerer, raised as an orphan by the sorcerer Alma, and who has an ambition to become the most powerful sorcerer ever, find the Radiant, the birthplace of the Nemesis, and wipe out the monsters once and for all. In this ambition, he might have a chance, as he has an ability that no other sorcerer has. 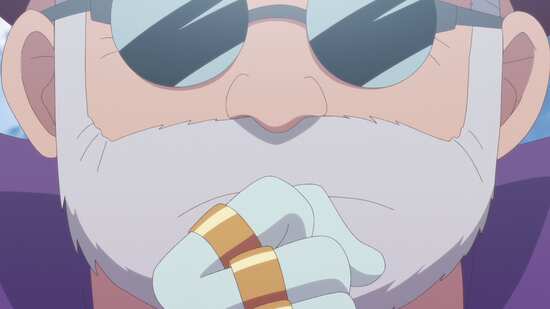 The first twelve episodes of Radiant are presented across two Blu-ray discs thus.

Disc 1
1. The Young Sorcerer –Seth–
2. True Courage –Bravery–
3. The Day of Departure –Alma–
4. A Meeting in the Sky –Encounter–
5. A Paradise of Wisdom and Hope –Artemis–
6. Drops of Friendship –Melie–
7.The Beast of the Underground Water System –Monster–

Disc 2
8. Proof of Strength –Progress–
9. Those Who Hunt Heretics –Inquisition–
10. Broom of Memories –Memory–
11. The City That Roars Like Thunder –Rumble Town–
12. The Shadow Lurking in the City –Darkness– Radiant gets a 1.78:1 widescreen 1080p transfer. The image is clear and sharp, and there are no issues with aliasing or visible compression. There are moments of banding though. It’s a pretty conventional looking shonen anime for the most part when it comes to the character designs, while the world design is as imaginative and bright as you would expect from a show about magic. There is the odd European flavour to the character designs, most particularly that of Doc, but generally it looks like a conventional anime. There are some odd creative choices though, notably the blur effects applied when a character is running. You have the choice between Dolby TrueHD 5.1 Surround English and 2.0 Stereo Japanese, this time with optional translated subtitles and a signs only track. I was happy enough with the Japanese, and the action and effects came across well. The actors are suited to their roles, and the incidental music is of strong quality. The same can’t be said for the opening theme song, which is more of a dirge, but the music in the show is of an orchestral bent. The subtitles are accurately timed and are free of typos. The 2 discs present the contents with animated menus, and each episode is followed by translated English credit scrolls.

The rest of the extras are on disc 2, beginning with a couple of featurettes. Radiant: Behind the Scenes lasts 24:10, and has interviews with the Japanese cast and crew, as well as the story creator Tony Valente.

Finally there are the textless credits. Radiant isn’t the most dazzling anime I have seen. Frankly, for me to forgo that pun would have been too much to ask, but this is a rather mediocre and forgettable series at this point. Although you must remember that most, long-running shonen action shows take forty or fifty episodes to bed in. Not too many show what they are truly capable of in the first twelve, when they are still setting up the universe and introducing the main cast. But I have to say that the signs are apparent that Radiant will be one of the also-rans, unless it can pull something truly radical in its next instalment. Watch the extras, and you can see how the story’s French creator, Tony Valente is a serious manga and anime addict, with a particular love of the shonen genre, and that is the biggest problem with Radiant. It never feels like its own thing; it constantly comes across as a love letter to other, more accomplished shonen anime. It’s as if he’s taken Castle in the Sky, injected a Naruto storyline into it, and populated it with Rumiko Takahashi characters. It’s even got the perverted old midget who keeps popping up when you least expect it a la Cherry or Happosai. The world that’s set up is interesting enough, a place terrorised by monsters known as the Nemesis, where if anyone survives their attacks, they are most likely tainted so that they become able to use the Fantasia power permeating the world; sorcerers in other words. Because of that taint however, and despite the fact that they alone can fight the Nemesis monsters, they are shunned by society because of that taint, and unregistered sorcerers are hunted by the Inquisition. In this world, Seth is an orphan that has been raised by a cantankerous sorcerer named Alma, and as per most protagonists in such shows, Seth has an ability that sets him apart. He can use Fantasia without wearing the special gloves that other sorcerers need. His ambition is to become the best sorcerer of them all, and rid the world of the Nemesis once and for all, remove the discrimination against people like him. Given that the origin of the Nemesis is a legendary place called the Radiant, a place no one has seen, that is Seth’s ultimate destination. When he becomes old enough to leave Alma, and can learn nothing more from her, it’s time to set out on his journey. She points him to a place called Artemis, where he might learn about Radiant from a sorcerer named Yaga. Artemis is the one place in the world where the Inquisition can’t venture, although it maintains its immunity by means of a brutal economy, where just entering the city puts you in debt to its government, and that debt increases rapidly. On the way there, Seth has his first encounter with the Inquisition, when he manages to rescue a Nemesis researcher named Doc, and his assistant Melie (a sweet and kind girl, unless she gets mad, and her personality switches to a destructive delinquent), and once they get to Artemis, they wind up joined at the hip, as Doc gets appointed Seth’s guardian, and Seth and Melie wind up racking up so much debt, which gets piled on Doc’s shoulders, that he has his hands full trying to keep them under control. Yaga turns out to be a Yoda like character, the perverted old man (in a cauldron) who pops up when you least expect him as mentioned earlier and he winds up training Seth. It might also be possible that Valente saw Midori Days, as there is a character in the show named Melba who runs a cafe, and makes absolutely vile coffee. Doc is in love with Melba, and will drink anything she makes as long as it leaves him with a chance to be close to her. She’s oblivious. Another impediment is her father, who lives as a glove puppet on her hand, and makes better coffee than his daughter, and refuses to let a reprobate like Doc anywhere near her. That is the regular comic relief in the show at this point, not that the show is all that serious. We might occasionally shift emphasis to the Inquisition, most of who are rabid in their hate of sorcerers, with some even bending the rules to take them into custody. But we mostly see an airship captain named Dragunov, who is much more nuanced in comparison, and very much the quirky captain that likes to cook for his crew. It is all charming enough, fun to watch, as Seth goes about learning his magic, and taking his first steps in fighting the Nemesis. There’s also a hint of just who the antagonists might be, with a sorcerer hidden behind bandages named Grimm butting heads with Seth and Melie, and a mysterious figure with a flute who looks like he controls the Nemesis. But really, Radiant is moving pretty slowly, and suffering from a rather small story universe. When you look at shows like Naruto or Bleach or One Piece, even twelve episodes in, they would have a cast, ten times larger than the cast in Radiant, the protagonist would certainly have more than just six people in his immediate circle, and there would be more in the way of episodic and overarching antagonists too. Certainly a character like Seth would normally have a rival, a Sasuke to his Naruto, a Gray to his Natsu. There just isn’t much in the way of drama at this point. He’s a happy-go-lucky main character who seems to be coasting on his skills and abilities. Radiant is entertaining enough to watch, and I have to admit that there is some pleasure to be had in seeing what other shows it’s referencing and paying homage to at any one moment, but it isn’t long before you might wonder when Radiant will start doing its own thing. Maybe it will pick things up in Part 2, but at this point, Radiant is very much an also-ran.