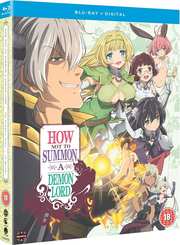 How NOT To Summon A Demon Lord (Blu-ray Details)

Review for How NOT To Summon A Demon Lord

I have to keep reminding myself that not everyone reviews anime, that they don’t have a pile of unwatched discs looming large over their evening viewing time, and that they don’t get pretty much every UK anime title as a matter of course to review. I say that, as I seriously want to make a crack about yet another isekai show coming to the UK. These days it’s rare that I’m not watching a fantasy show about someone being lost in another world, and there have even been times that I’ve had two on the go for review. It could very well be that How Not To Summon a Demon Lord will be the only isekai show that you buy this year, and you’re expecting a fair and balanced review from someone who hasn’t fallen into a slack-jawed delirium at having watched too many shows from a single genre in a short space of time. For that I can only apologise (and parenthetically ask Manga to release a vampire show; we haven’t had one of those in ages!) 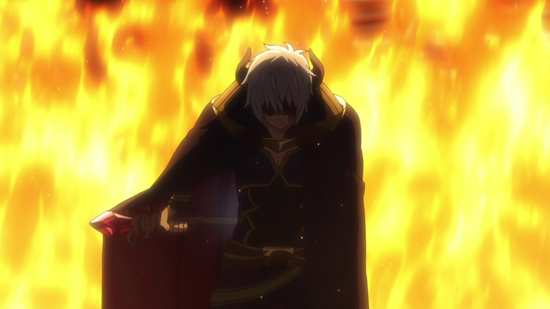 Takuma Sakamoto is a typical otaku player of the Cross Reverie MMORPG. He’s levelled up his character to the max, and he revels in the demonic persona of his Diablo character. That in the real world, he’s socially inept and dismissive of ‘normies’ means little when he’s killing it in Cross Reverie. Then one day his world changes, literally. 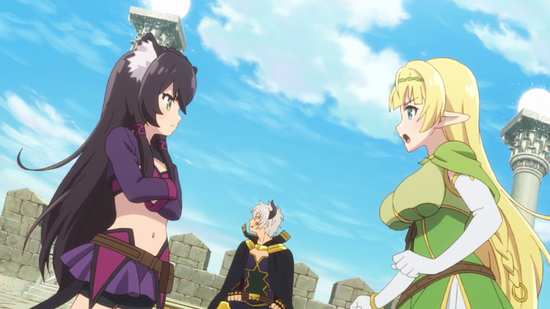 Now he really is Diablo, demon lord possessing great power, living in a world not too far removed from the game. He’s been summoned by a buxom elf named Shera and a cute Pantherian named Rem, to serve as their familiar as they quest in their dangerous world. Only their spell backfired, and now Diablo has two cute slave girls bound to him by more than just chains. And while he got to level 90-odd in Cross Reverie, this fantasy world that he’s now lost in hasn’t really progressed far beyond level 30. He has god level powers in a world of minnows, and he has two cute girls who have to obey his every whim. Now if only he could do something about that social ineptitude. 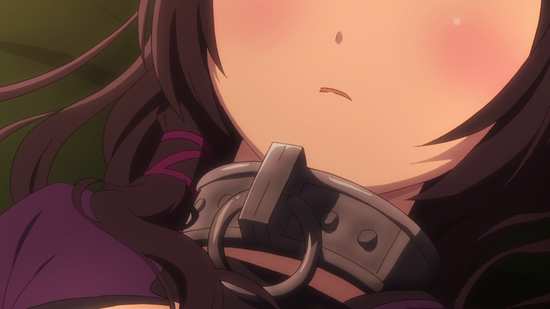 12 episodes of How Not To Summon A Demon Lord are presented across two Blu-ray discs from Manga Entertainment. 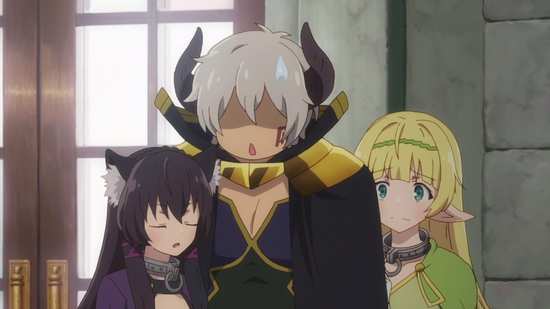 How Not To Summon a Demon Lord gets a 1.78:1 widescreen 1080p transfer. It’s a fine transfer of a recent show, clear and sharp with decent detail. The colours tend to the bright and primary, and there is no visible problem with compression, aliasing or banding. The animation is smooth, even if the character designs seem generic. This is one of the saucier shows to come out recently, so expect lots of animated nudity and sexualised scenes. If you’re in the mood for ecchi, you’ve come to the right place. 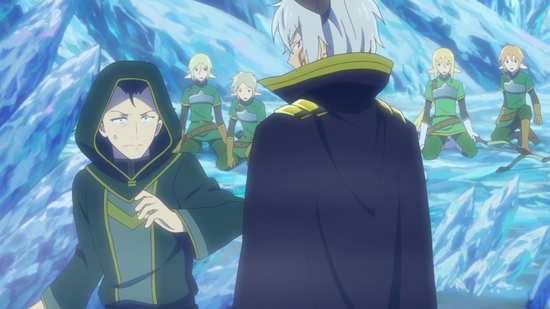 How Not To Summon a Demon Lord gets the choice between Dolby TrueHD 5.1 Surround English and 2.0 Stereo Japanese, and this time the translated subtitles and signs only tracks are unlocked during playback. I stuck with the Japanese audio this time around and was happy enough with the experience, even if the character voices are somewhat generic and cookie-cutter. The subtitles are timed accurately and free of typos. The music drives the story well, but is rather forgettable, and in the case of the theme songs, skippable as well. 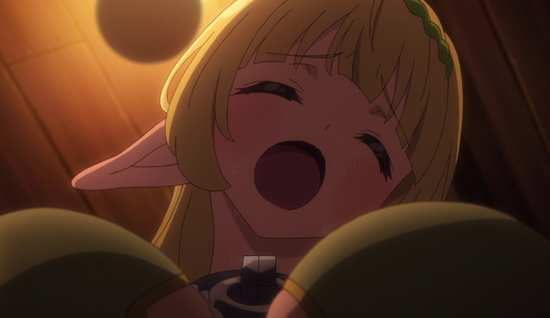 Disc 2 has all of the extras. 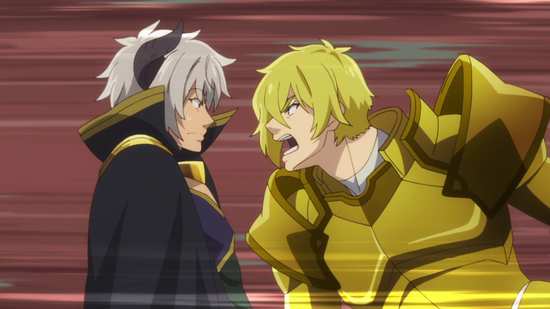 There is a video commentary on episode 1 with Jad Saxton (Rem), Sarah Wiedenheft (Shera), and Leah Clark, adaptive scriptwriter and voice of Sylvie.

You also get a Promo Video (2:26), and the Textless Opening. 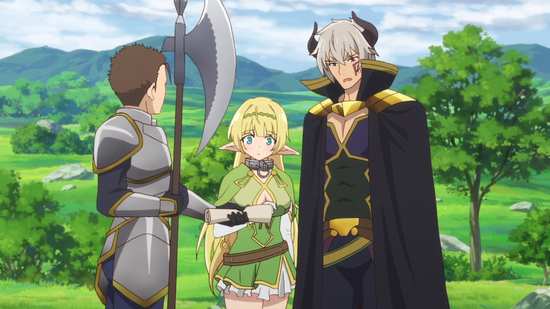 Once in a while I get a show like this to review, a show which I enjoy despite the content, not because of it. My overall reaction to How Not To Summon a Demon Lord was that it’s a nasty little piece of misogyny, playing in an oversubscribed genre where it’s not even a real contender against the likes of Log Horizon, or No Game No Life, or That Time I Got Reincarnated as a Slime, or even my personal bugbear, Overlord. But I have to admit that when I wasn’t disgusted, or offended by the show, I did enjoy it. I certainly was never bored, and the characters were mostly likeable enough to overcome the shortcomings of the writing. 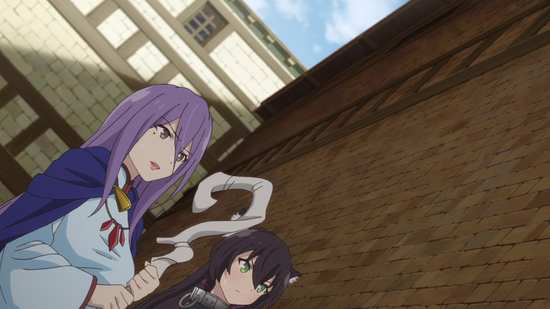 Let’s be honest though. It is a vicarious wish-fulfilment show, in which a quintessential otaku character gets cast into a fantasy world where he gets a decent body, maxed out powers and abilities compared to everyone else, and an instant harem when the two girls that summoned him have their spell backfire, and they wind up enslaved instead of being the masters of that which they have brought forth. You have the exuberant booby girl, and there’s the quiet flat-chested girl, and you know there will be a tsundere along before the series ends, and plenty of other girls as well. 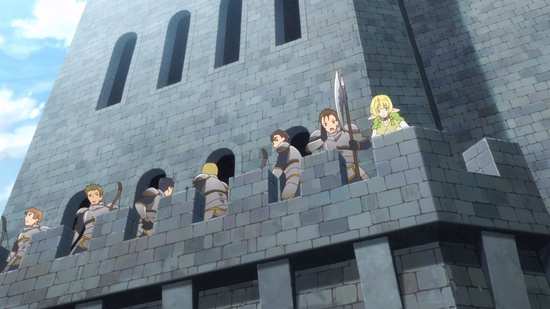 The only saving grace is that Diablo is limited by his original personality. Takuma Sakamoto is pure otaku in that he avoids socialising, is nervous and withdrawn in company, and has no way of expressing his lustful feelings other than by freezing awkwardly in place and over-analysing the situation. In other words, his are a safe pair of hands to be groping these boobies, and it doesn’t take long before the girls realise that being slaves to this over-powerful, self-proclaimed demon lord is safer than going it alone in a world where they are outclassed and weak. 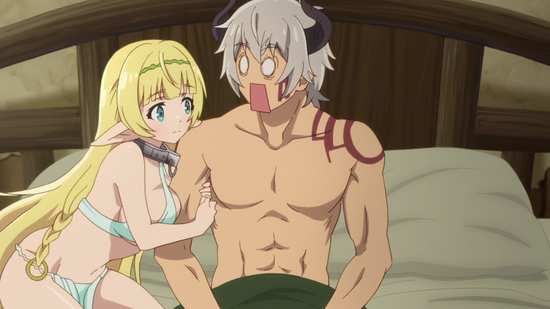 This is a saucier show than most, and awkward and repressed Diablo might be, the show still finds ways to contrive sexually charged situations, and he does wake up every morning with at least two naked girls draped over him. There will no doubt come a time where even the most hormonally charged 14-year-old viewer of this material will roll their eyes at the excess and contrivance. The magic transference in one scene was just ridiculous. When laying hands on a girl’s stomach isn’t enough, the protagonist is advised to cut a hole in her belly, or use an existing hole. If you’re not WTF-ing at the TV screen by this point, you’re a more lecherous person than I! 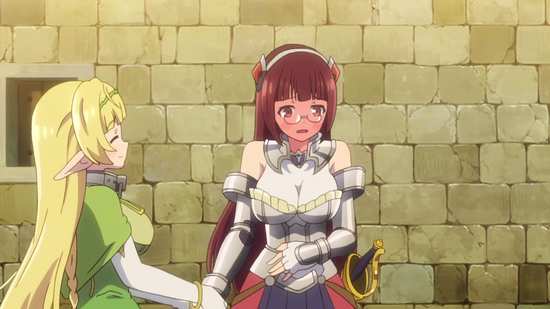 My WTF button was pushed at another point when the first real villain of the show appeared, Shera’s brother, who arrived on a mission to bring his elf-princess sister back home to the Elf Kingdom where she can ostensibly resume her royal duties. I say ostensibly as the reality is that he wants her to bear his child. Yes, another anime pulls out the sibling incest card. It’s also at this point that you realise that How Not To Summon A Demon Lord’s villains are of the ‘extreme face-contorting whack-a-doodle psychopathic freak’ kinds that telegraph their evil from separate time zones. They make the viewer hate them on first contact so badly, that any nuance or drama is sucked out of the story as you just sit there in front of the TV, quietly chanting “Kill them, kill them, kill them.” You want these bastards to get their comeuppance with alacrity, and you want to feel good when our heroes land the final blow. This show even cheats you of that vicarious pleasure, and Shera’s brother exits the story at the hands of the next villain to enter the story. Righteous vengeance denied! 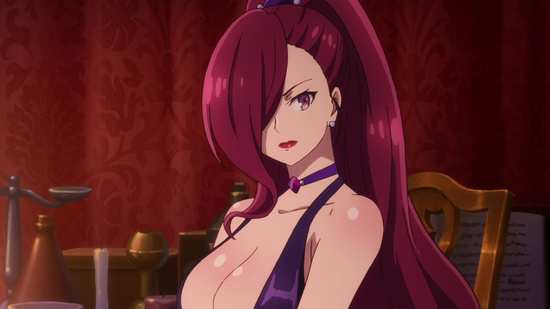 On the one hand you have short-cut character writing for the histrionic antagonists of the show that alienates the viewer, and you have the kind of wish-fulfilment by proxy fan service that is a blatant distraction from the rather mundane and familiar storytelling. But the story does unfold at an agreeable pace, and the protagonists are likable, while the main character himself really is quite interesting, in the way that he projects a cultivated, game character artifice, while hiding his insecurities and pre-existing character flaws. How Not To Summon A Demon Lord may get a score that’s just above average, but it’s far from an average show. It’s a show that I both love to hate, and hate to love.