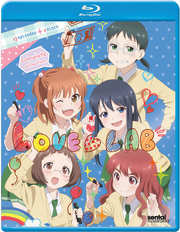 DVD
Is the Order a Rabbit?
Related Articles

There was a brief time, back when Sentai were clearing out their final DVD collections and sales were aplenty, that I realised, given my utter procrastination when it came to online streaming, that it would be more convenient to try before I buy, by buying cheap DVD versions of their shows, watching them, and upgrading to Blu-ray if necessary. Thankfully I didn’t do that too often, as not too many of their titles were Region B compatible on Blu-ray, but I did get plenty of good Sentai shows for cheap on DVD that way. One show that did get an upgrade; actually I placed the order for the Blu-ray before I’d finished watching the series through on DVD, was this, Love Lab. I’ve only now gotten around to watching that Blu-ray, so here’s a review to upgrade those AV details, and to see if it’s just as hilarious the second time around. 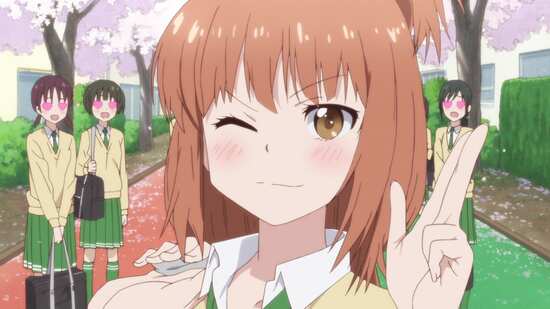 Fujisaki Girls Academy is an elite preparatory school, where only the finest, most elegant girls attend. Boys certainly aren’t tolerated, and relationships are forbidden. Riko Kurahashi might not fit the ideal of elegance in school, but her wild, rambunctious nature still gets her the idolisation of the first years. The Student Council President, Natsuo Maki on the other hand is the epitome of elegance, hard working, assured, confident, the Fuji Princess being the exact opposite of Wild Girl Riko. It must have been Riko’s wild and rambunctious nature that made her ignore the ‘Please Knock’ sign on the door when sent on a chore to the Student Council Room. She walked in on Maki making out with a hug pillow! 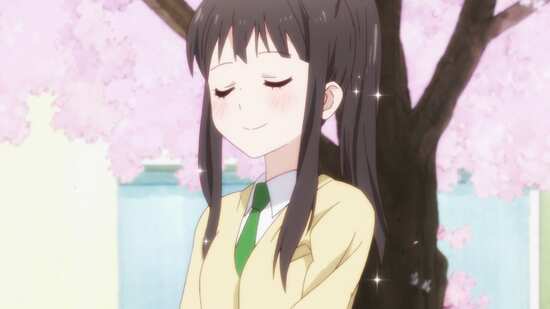 Boys may be frowned upon at Fujisaki Academy, relationships forbidden, but that doesn’t stop girls from fantasising about romance, and Maki’s secret side longs to be in love. And like an idiot, Riko blurts out that she’s had lots of experience with boys (she hasn’t). Maki wants to know more about boys than just kissing a hug pillow. She makes Riko an aide to the Student Council President so that she can secretly help her with her love training, things like how to meet a boy, how to hold hands, how a girl should present herself. Only Maki’s enthusiasm for research easily gets out of hand. The Love Lab is in session, and as it grows, it becomes harder for Riko to come clean about her own inexperience. 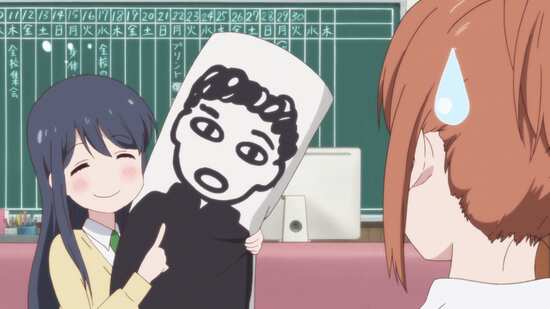 All 13 episodes of Love Lab are presented across 2 Blu-rays from Sentai Filmworks.

Disc 1
1. Their Remarkable Encounter
2. The Shy, The Cool, and the Perverted?
3. Sayo and Eno Declare War
4. Love Lab Resumes! Or So We Thought...
5. This is Fuji Girls Love Broadcasting System
6. The Terrible Legend of Riko
7. To the Kurahashi House!
8. To the Wild Kid...
9. That Smile... 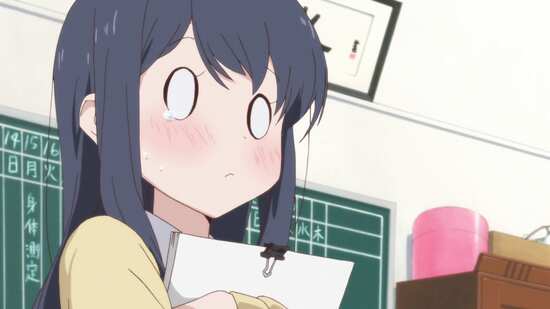 Love Lab gets a 1.78:1 widescreen 1080p transfer on these discs. The image is clear and sharp throughout, and there’s no problem with compression, aliasing or banding. Love Lab is a bright and colourful comedy animation, the character designs are simple but effective, and the animation is strong and energetic. It may not offer any big budget moments, but the comedy is always uppermost, and in that respect the show works very well in terms of visuals. The HD upgrade does its usual in bringing out the vivid colours, and making the line-art pop. Detail levels are excellent, and the show really shines on Blu-ray. 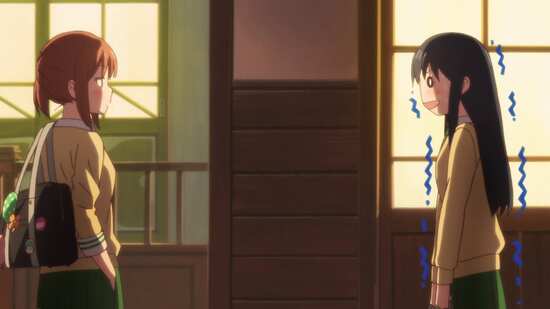 This is a subtitle only release, with DTS-HD MA 2.0 Stereo Japanese the only audio option on the discs. On this release, the subtitles are optional, although you’ll have to use your remote to toggle them on and off as there is no menu option. It’s a dialogue intensive show, heavy on the comedy, and the characters are perfectly cast for their personality types. The dialogue is clear throughout, and the subtitles are timed accurately, free of typos, and easy to read. The show’s action sequences come across well with the stereo set-up, while the music is enjoyable, if unmemorable. 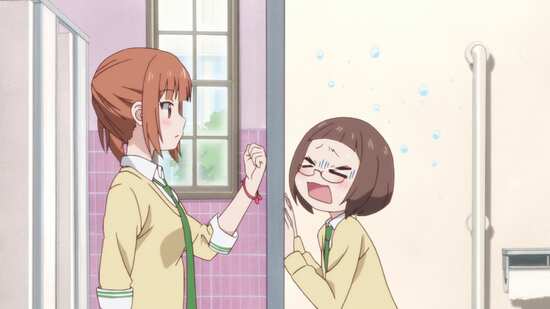 Disc 1 autoplays with a trailer for the Anime Network. 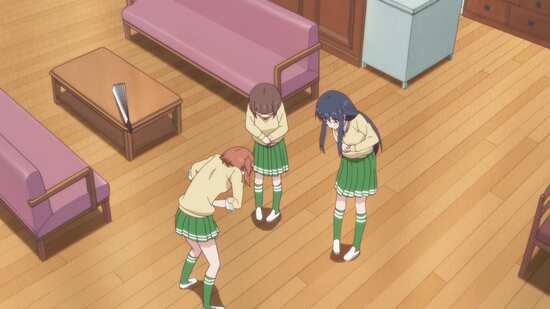 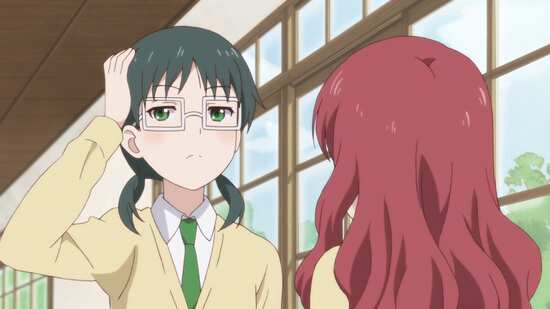 If you look at the cover, you might be forgiven for assuming that Love Lab falls into the cute girls doing cute things category, a little slice of life escapism of the sort that is so popular these days. Read the blurb and you might expect another student council anime, again a genre that is oversubscribed. And it is true that Love Lab does have these two elements in abundance, cute girls, cute things, student council. What you won’t realise is that Love Lab might just be the funniest anime released in years. I was laughing uproariously during its thirteen episodes, as it’s a show replete with wit, humour, slapstick and more; literally so when it comes to the slapstick. 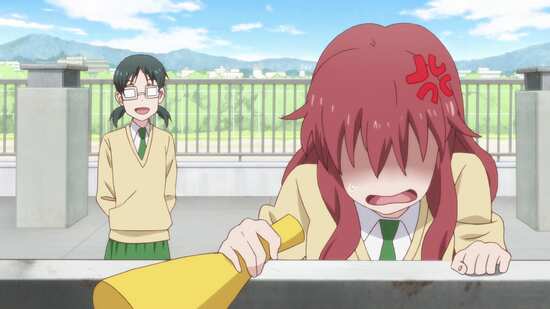 One form of Japanese comedy is the double act, the tsukkomi and boke of the Manzai routine, a refinement of the Laurel and Hardy/Abbot and Costello, straight man comic routine, where the straight man will berate the idiot, smacking him with a large paper fan called a harisen. A lot of comedy anime have used this set-up, with characters wielding harisen, shows like Magical Shopping Arcade Abenobashi, and Full Metal Panic. The secret is to be unabashed, go all out for the comedy jugular, and Love Lab fires on all cylinders from the first frame. One of the characters even lists making harisen as one of her life skills. Stupidity and chastisement fly in Love Lab, guaranteeing laughs by the bucket-load. 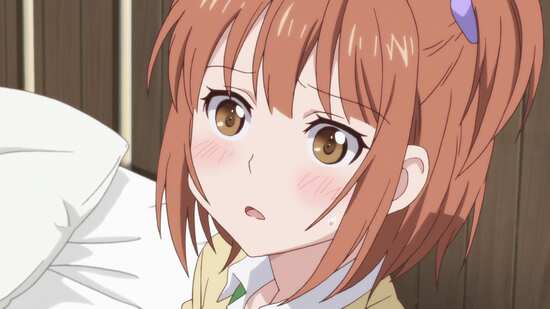 Of course physical abuse by itself isn’t funny. There’s got to be a set-up behind it, and Love Lab’s premise is one of the simpler and more obvious, so much so that you might wonder why it hasn’t been done before. After all, girls will become interested in boys at some point, and in an exclusive girls school, it becomes difficult to test the waters, especially when that school has a ‘no fraternisation’ policy. But you can’t stop girls from wondering, and fantasizing, or indeed wanting to be prepared should contact with boys actually happen one day. The Love Lab is set up to practice for romance. This could potentially go in a prurient direction, but thankfully this show remains chaste and innocent. These are middle school girls after all. 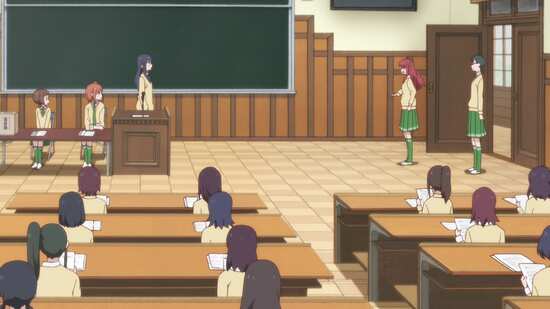 The initial comedy comes from the unlikely protagonists that start the Love Lab. Riko Kurahashi is the ‘Wild Kid’, the brash, outspoken, tomboy of the school, where smart, elegant and ladylike is the goal. She’s idolised by younger students as being more of a boy than actual boys, although deep down she too fantasizes about romance. Then there is the Student Council President, Natsuo Maki, known as Princess Fuji, who epitomises the elegance that Fujisaki girls aim for, and she too is idolised, only when Riko bursts in on her in the council room and finds her making out with a hug pillow, it becomes clear that Maki is obsessed with romance, and stressed by her own inexperience, and she’s also a ditz. A little white lie that Riko has experience with boys, has had boyfriends, turns her into the Love Master in Maki’s eyes, and a friendship is born, with Maki wanting to practice romance, and seeking guidance from Riko, the Love Master. And so the experiments begin... 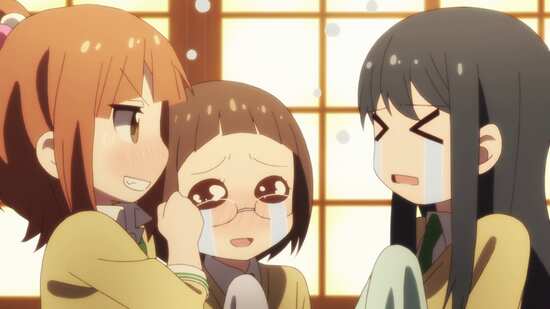 Maki wants to practice accidentally bumping into boys, only she does it at breakneck speed. Practicing holding hands, she almost breaks Riko’s fingers. Then she wants to practice being carried like a princess. She’s completely over the top and unhinged with her fantasies, so what should be a simple idea becomes an elaborate play. The fact that Riko brings her back down to earth with a dose of common sense (and when that doesn’t work, a harisen slap to the head), only enhances her reputation in Maki’s eyes. 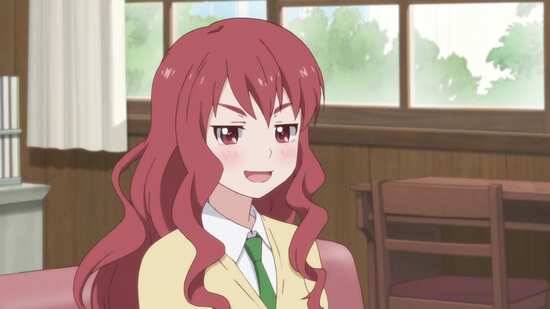 Before Riko has the chance to come clean, the Love Lab grows. The first inductee is the student council secretary Suzu, terminally shy, and endearingly clumsy, she overhears one of Maki’s fantasy trips, and has to be let into the Love Lab secret as she’s gotten the wrong idea. It’s Suzu whose hobby is making harisen, and once she joins the Love Lab, the slapstick never lets up. Then the treasurer Sayo and the former president Eno join. Eno’s the spoilt princess type, who’s been nursing a grudge against Maki for usurping her (Maki did so much of the work that everyone started thinking she was the Student Council President and it just stuck), while Sayo’s ground state is cynicism and her passion is money, and she quickly figures out the truth about Riko, but chooses not to spill the beans as it’s more fun watching Riko squirm. She’s also the only girl in the group to actually have a boyfriend. 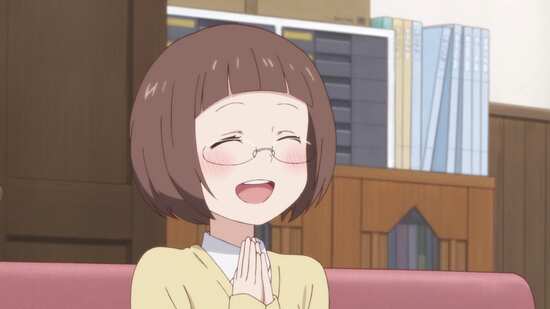 If that isn’t enough, the news leaks that the student council is researching romance, and soon requests start coming in, questions about boys and how to approach them. Pretty soon they’re researching all sorts of things, and all eyes turn to Riko as the Love Master. What started off as a little white lie turns into a major burden, and every time she tries to tell the truth, it only gets worse. 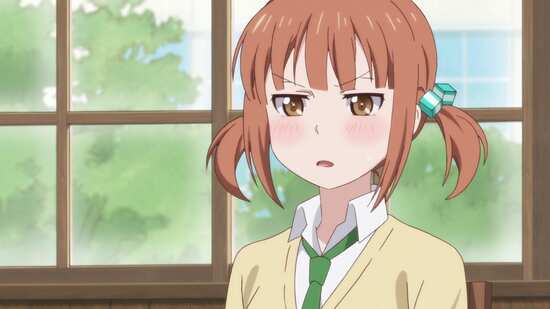 So the comedy unfolds, with more and more daft experiments, problems with avoiding the teachers, an inquisitive school newspaper club, families, it gets funnier and funnier as the show unfolds. You almost don’t realise that the show is actually about friendship, about these five unlikely girls finding each other, and revelling in spending time together. Much of this is down to the characterisations, the way they interact, how they observe each other, pick up on each other’s quirks and sensibilities (there’s one scene where four of the girls simultaneously imitate a character quirk of the fifth to poke fun at her), that really speaks of genuine and fun friendships in a way that few other shows can manage. It feels unscripted and natural here. And of course it comes down to that initial lie that Riko told, that sparked off the friendship between her and Maki, asking the question whether given that lie, the friendship was real in the first place. It’s a heart-warming and affirming climax to the show that gives it a real emotional depth, all in the funniest anime I have seen in years. The sooner someone in the UK licenses this, the better. 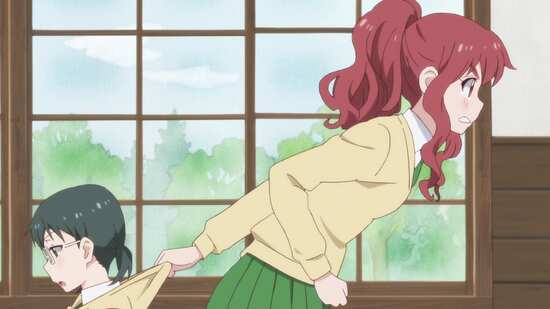 To date, no one in the UK has licensed Love Lab, but it’s okay, as the US Blu-rays from Sentai play in UK Blu-ray players just fine, and as you should rightly expect at this point, the clarity of the animation and the fidelity of the audio both improve tenfold when it comes to watching the show in HD as opposed to the SD DVDs.