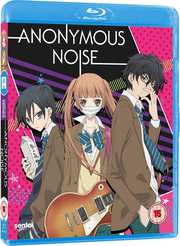 It’s odd to think that when it came to music focused anime released in the UK, until quite recently we had the choice of just two, K-On! and the truncated release of Beck Mongolian Chop Squad. Subsequently Beck got a complete release from All the Anime, but that was it; an adolescent rock band drama, and cute girls doing cute things in a light music club sort of way. That was all there was for several years, but now with the advent of rhythm games and a fascination with idol culture, there are more music anime than ever before, from Super Sonico to Love Live to Sound Euphonium to Show By Rock. We’ve passed the point where a fan can afford to be picky, and discriminate between the offerings. All of this means that Anonymous Noise will have to be good at what it does, and offer something different to stand out from the crowd. Another cute girls doing cute things musical just isn’t going to cut it. 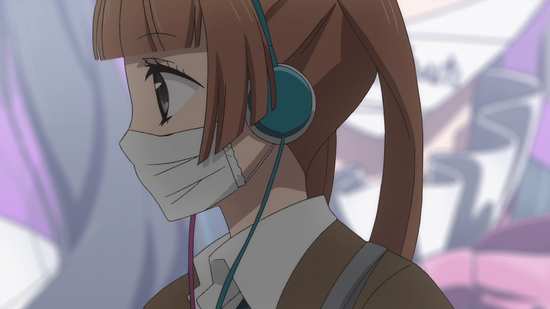 When Nino “Alice” Arisugawa was a little girl, she loved singing with the boy next door, Momo Sasaki. They’d serenade each other from their bedroom windows and were inseparable best friends. Until the day Momo moved away suddenly, with only the promise that Nino’s singing would reunite them. Nino was heartbroken, but then she met another boy, Kanade “Yuzu” Yuzuriha, who loved writing songs in the sand on the beach where Nino would go to scream out her frustrations, songs that Yuzu couldn’t sing for a medical condition. But Nino’s voice could sing the songs he wrote, and for a while Nino had a new best friend. But just as suddenly, Yuzu vanished... 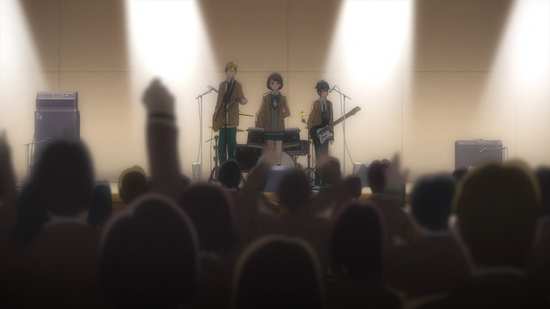 Since that day, Nino has been singing on the beach, hoping that her voice would reach her friends, that she would one day meet Yuzu and Momo again. Six years later, Nino starts high school and when it comes to the ubiquitous after school clubs, she goes to check a performance of the light music club. They’re performing an “in NO hurry” cover version, an up and coming band, and Nino knows the song well. When she sees none other than Yuzu on guitar on stage, she has to join in... 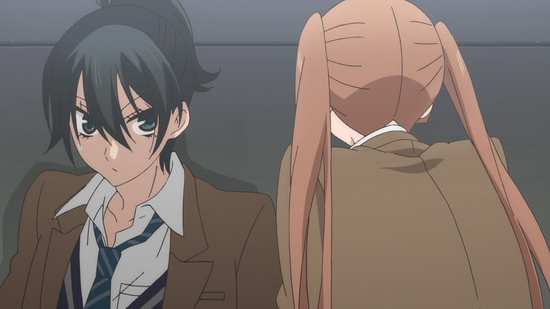 12 episodes of Anonymous Noise are presented across two Blu-rays from All the Anime.

Disc 1
1. We Hide Our True Heart
2. Please, God, Let Alice’s Love Be Forever Unrequited
3. No Matter What, Right Now
4. The Ones Who Hid Their True Hearts Joined Hands That Day
5. I Wouldn’t Have Had To See You Smile Like That
6. We Keep Walking Forward, Today and Tomorrow
7. Our Eyes Finally Met One Another’s
8. I Was Just Gonna Be Your Friend, I Swore I Would Be
9. So We Set Off at a Run, Towards the Summer 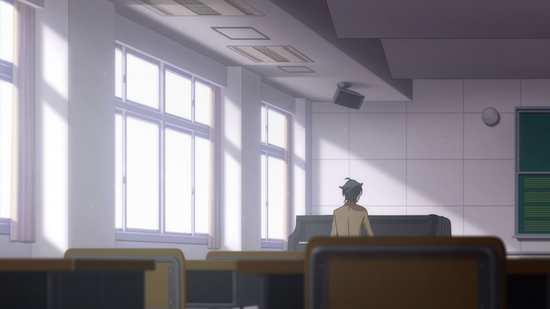 Anonymous Noise gets a nice 1.78:1 widescreen 1080p transfer. The image is clear and detail levels are excellent, while the colours are strong and consistent. The animation is unmarred by aliasing, banding or visible signs of compression. It’s purely coincidental, but it’s somewhat apropos to see a main character spending most of her time behind a face mask, but the character designs are likeable and distinctive, while conforming to the shojo art styles. The animation is accomplished well, and this is one of those shows that make use of sudden alterations in art style and character depictions to emphasise comic moments. More jarring is the sudden change to 3D CG during the performances. The animation is pretty poor at this point, and you’ll have to suspend your disbelief a tad higher. 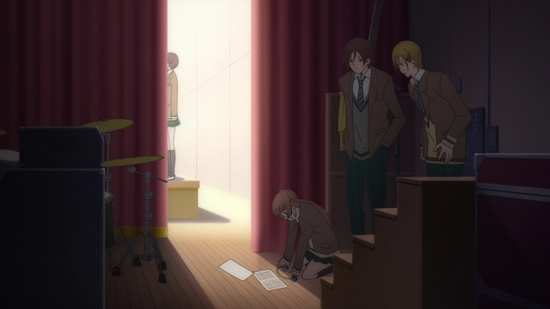 The audio comes in DTS-HD MA 2.0 Stereo English and Japanese with subtitles and signs locked during playback. I stuck with the Japanese audio throughout, and cannot comment on the dub, and neither do I know if the songs are also dubbed in the English version. I was happy with the Japanese, the voice actors suited to the roles. The stereo is put to good use offering a degree of space to the audio, and the subtitles are timed accurately and free of typos. The show’s music isn’t my cup of tea, but I have to say that the rawness of the vocal performances in the songs really does complement the story, and this is one show where the main character’s singing voice and speaking voice sound like they come from the same actor (recently had a jarring moment re-watching Speedgrapher). 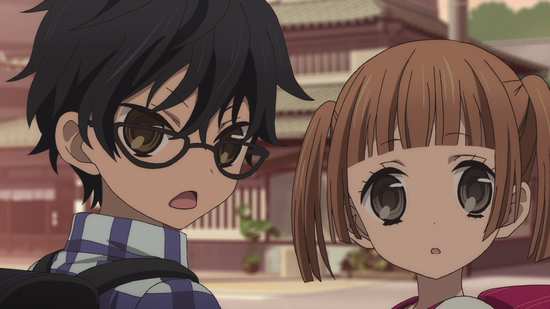 The discs present their contents with static menus and each episode is followed by a translated English credit reel. 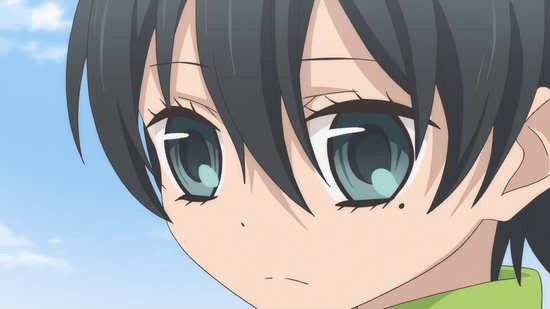 You get a 32 second Japanese commercial for the tie in CDs.

There are 3:54 of Japanese Promos, 15:33 of Textless Openings, 21:40 of Textless Closings, and trailers for Grimoire of Zero, The Squid Girl, Tanaka-kun is Always Listless, and Flip Flappers. 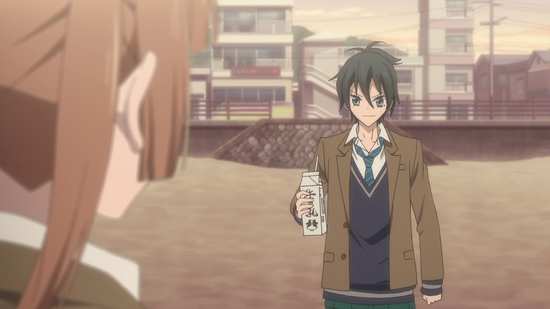 The important thing for any new series, not least a show centred on music, is to offer something new and different from previous shows in the genre. We’ve certainly had plenty of idol anime, and the number of shows that feature girls getting together in groups or bands to compete in the pop music stakes is multitudinous. The first thing that Anonymous Noise does is to switch the music genre. This time it’s Alternative Rock, and given the talents of the show’s protagonist, it’s Alternative Rock with a punk edge. Now that’s not something I’ve seen in a music anime before. Also, given how ubiquitous love stories are in anime, I have to admit surprise that it’s taken this long for me to see a music based anime with a love triangle at its heart. When it comes to making a new dish with tried and trusted ingredients, Anonymous Noise looks appetising indeed. 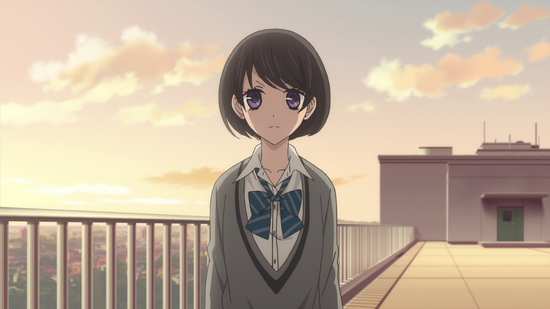 I’m happy to say that Anonymous Noise delivers. It’s got a great story with really wonderful, well written characters, and it unfolds at an appealing pace, while the music, perhaps because of the main character Nino’s idiosyncratic vocals, is quirky enough to make you go looking for a soundtrack CD or download. Given that All the Anime have a music label, hopefully they have their eyes on this show’s soundtrack as well. 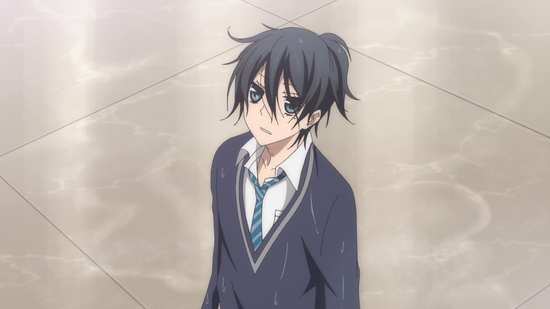 It’s all about unrequited love, a profusion of density in the characters, and the fallout that results when feelings start being expressed. It gets pretty convoluted. In elementary school, Nino lived next door to Momo, and they were inseparable by day, while at night they’d sing at the top of their lungs from their respective bedroom windows. But, Momo’s parents’ marriage was falling apart, and one day, his mum put him into a car and moved away. Nino was left bereft; the last thing Momo told her that her voice would reach him. That’s when she met Yuzu, a boy who wrote music in the sand on the beach, and when Nino started singing it, he found his muse, and Nino found songs that she hoped would reach Momo. And then Yuzu left just as suddenly. 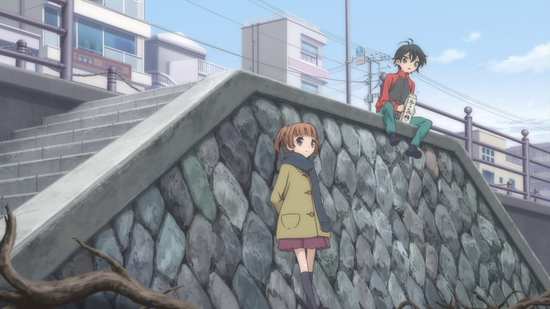 Nino finds them again when she starts high school, and joins the light music club. The music club is the day face of the up and coming band, ‘in NO hurry to shout’, and they’ve been singing all the songs that Yuzu has been writing for Nino (who he calls Alice from her surname, Arisugawa). It’s a band that performs in disguise, taking its member’s identities from Lewis Carroll’s Alice in Wonderland, Alice on vocals, Cheshire, Hatter and Queen playing instruments. Till now, a girl named Miou (who’s sweet on Yuzu) has been performing the vocals, but when she sees that Yuzu’s real Alice has turned up, she quits the band, leaving Nino to take her place, although given Yuzu and Nino’s past, they have some history to work through first. 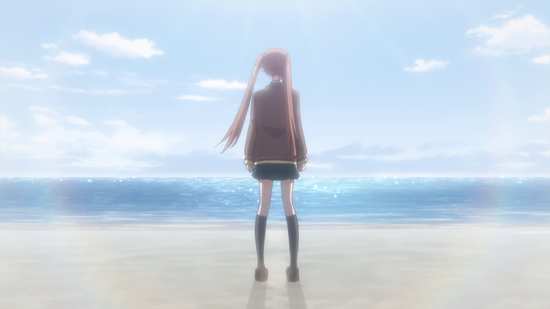 Momo’s also at the school, although he’s changed his name, and is in an advanced class. He’s also writing music, songs that he wanted Nino to sing, but due to his family circumstances, he took the first chance he got, and signed a contract to write music for a pop group. He’s garnered no little notoriety as a music producer, and he has several obvious reasons, and more reasons unspoken not to see Nino again. So Nino loves Momo, Momo doesn’t want to know. Yuzu loves Nino, Nino’s unaware. Miou’s fallen for Yuzu, same result, and of course there’s someone who has feelings for Miou too. Momo’s writing songs for Nino to sing, not that he’ll ever let her. Yuzu is writing songs that Nino will sing as part of the band, but she’s singing them so that Momo will notice her. And when Momo finds out that Nino’s in the band in NO hurry to shout, he quits the pop biz and starts a rival alternative rock outfit called Black Kitty. It’s a tangled web, complicated even further by Yuzu and Momo’s respective family issues. I almost forgot. Momo and Yuzu are friends in school, unaware of each other’s ‘secret’ life, figuratively crying on each other’s shoulder over their respective relationship issues. 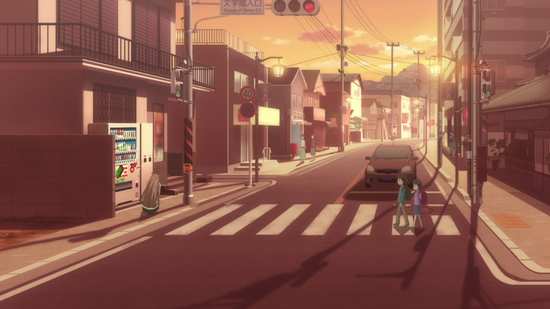 If you like soap opera melodrama in your fictional relationships, then Anonymous Noise is the best such show I’ve seen since Nana. When it comes to the show’s conclusion, I don’t even begrudge it lifting from Beck Mongolian Chop Squad. You have a summer music festival, rival bands on two stages at the same time, and a wager. The stakes of this bet are a little more esoteric, but it’s no less compelling. But when it comes down to it, in a convoluted tale of unrequited love, there’s no real conclusion, no happy ending, and neither should there be. This is one instance where leaving things unresolved is a lot more satisfying than a definitive ending where two people live happily ever after, and everyone else is left lamenting their respective lost loves. 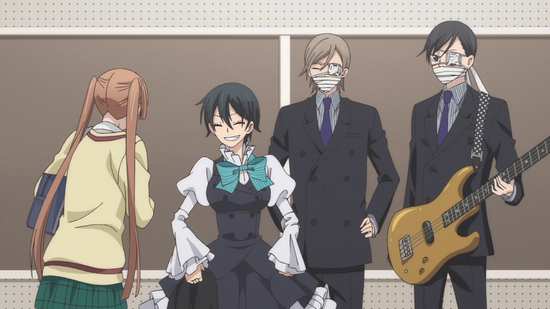 Anonymous Noise gets the usual Sentai presentation, and the quality is as good as you would expect by this point. The visuals and the audio are top notch (although once again I can’t speak as to the dub), but it seems that All the Anime are just giving it the standard release treatment. No extra goodies in the box. But you shouldn’t miss out on this show if you’re into light romantic drama anime.