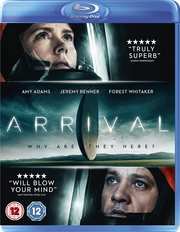 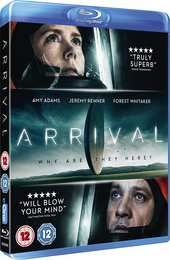 Every minute that you can forget the world these days is a golden moment to be treasured. There’s a brief instant between waking up and me remembering to wash my hands that is pure bliss. In these times being a home cinema nut is an advantage, and in the last few months, thanks to some serious bargains, I’ve amassed a four foot pile of unwatched films and TV. I can see that shrinking pretty quickly now, but it’s still a whole lot of escapism. But what to watch? What to watch? Last night as I browsed the pile, my eye alighted first upon Shaun of the Dead... Maybe not a zombie apocalypse. Next I considered Twelve Monkeys. Aw hell no! I finally chose Arrival. After all, a movie about first contact with aliens should be fairly innocuous. So aliens arrive, the world freaks, governments lock everything down, and people start panicking, mass buying, and looting. Next time, I’ll just go with my gut and watch the Teenage Mutant Ninja Turtles movie!

Aliens have indeed come to Earth. 12 giant UFOs, dubbed Shells now hover over 12 different parts of the world, one in Montana. As the world is uncertain as to how to react to this epochal moment, one woman is called upon to serve her country. Louise Banks is a linguist with a talent for translation, and her expertise is required to decipher the alien language. With theoretical physicist Ian Donnelly, they set to work aboard the alien vessel trying to communicate, but it becomes a race against time as the other nations in the world also do the same. The potential is there for an amazing technological leap forward, or human civilisation may just go the way of the Neanderthal when Homo Sapiens showed up.

Arrival gets a 2.40:1 widescreen 1080p transfer with the choice of DTS-HD MA 7.1 Surround and 2.0 Stereo English tracks, and a Dolby Digital 2.0 Stereo English Audio Descriptive track, with optional English SDH subtitles. The film doesn’t look great, but then again, this is how it looked in the trailers that I saw, and the clips in the film reviews, so it may be more an issue with the original source material. The image is clear and sharp, detail levels are good, but the colour palette is muted and dark, while blacks feel washed out and grainy. But this heightens the sense of paranoia and uneasiness in the story, gives it more of a documentary feel. The audio is excellent, the film gets a sound design that really heightens the suspense, while the music is eerie and unsettling. The surround is put to excellent use in this regard while keeping the dialogue clear.

You get one disc in a BD Amaray, which autoplays trailers for Miss Sloane, A Monster Calls, and Jackie, before booting to a subtly animated menu.

Xenolinguistics: Understanding Arrival lasts 30:02, and is a look at the making of the film with input from the creators.
Accoustic Signatures: The Sound Design lasts 13:59.
Non Linear Thinking: The Editorial Process lasts 11:19.
Principles of Time, Memory and Language lasts 15:24 and justifiably gets a little philosophical.

Arrival was Denis Villeneuve’s first sci-fi feature, and it’s clear to see why he went on to direct Blade Runner 2049. His approach to sci-fi storytelling harks back to a time before special effects wizardry, when narrative and character was paramount, and he also doesn’t dumb the story down in the slightest, instead challenging the viewer to make use of the intellect. You can see that approach from the beginning, as the story focuses on character Louise Banks’ point of view, and the monumental events affecting the world happen in the background. We hear military jets scrambled, we see people panicking, we hear snippets of news reports, but we don’t discover why until the character does. It’s an approach that continues through the film, seeing the situation from a character perspective rather than a narrative perspective, so that when the wallets are finally opened, and the special effects appear on screen, it never feels like the eye-candy flash and bang that you get in more conventional blockbusters. Yet I was paying more attention to this film than any of those blockbusters.

I did have a couple of reservations going in though. Certainly when the film started, with the unexplained appearance of the ships, and the military knocking on Louise’s door looking for her expertise, I had an uncomfortable flashback to the remake of The Day The Earth Stood Still. Thankfully there’s no Keanu in this film. My second issue was with some other smart sci-fi movies that I saw paralleled in this one. Film’s like Contact and Interstellar both have protagonists that embark on epic, unprecedented odysseys, journeys of discovery that boggle the mind, yet in the end, it’s all brought back to something very personal and human in their own experience. It’s the Rosebud phenomenon, and it can feel like a cheat when overused.

It certainly looked that Arrival was heading in the same direction, as Louise Banks’ efforts to communicate with the aliens kept referencing her own thoughts and memories. But Arrival manages to have its cake and eat it in this regard, as it flips the audience perceptions in such a way that it makes you re-evaluate the whole film as the end credits roll. It’s quite the twist, really smartly done, and with just enough foreshadowing to make it feel natural and right, but not too much foreshadowing that you get the twist too soon before it happens.

Arrival is a smart, sci-fi movie that is very well made, and quite rare in the business, it tells a story that you’ve never seen before. Aliens have invaded Earth in many a movie, first contact is a staple of the sci-fi genre, but Arrival puts a spin on the old tropes that makes it feel utterly fresh and original. Personally, I felt that it was a little too downbeat and dour, but then again it has to be to make its story work, its characters feel right. Also because it is a film that challenges the grey-matter, it makes it a little harder to emotionally invest in the characters, at least the first time around. Now that I’ve cracked its puzzle, I look forward to re-watching it and seeing what I missed.

Think it is a very well thought out sifi story of first contact, the 90 degree angled gravity floor was a good effect, and the time travel effect of the story is very slow to figure out, but very clever when it happens. it has a positive story of alien/human co-operation, that makes a change, but we do not know why this happens in the far future. Maybe a sequel will tell us that LOL. As for directors other movie bladerunner 2049, though that sequel very poor compared to original, and harrison fords poor acting was only in it for the bucks. No way could they get near to the original for a superior atmospheric film.
posted by bandicoot on 29/5/2020 01:38