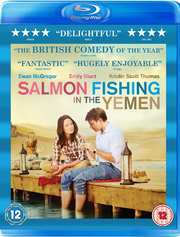 Review for Salmon Fishing in the Yemen

There has been a tragic irony to this film for the last five years that wasn’t there when it was made. It tends to invoke an aversion to watching it, which while illogical, is certainly understandable. The Yemen depicted in this film (with Morocco standing in) bears no resemblance to the war torn and famine blighted nation that exists today. Salmon Fishing in the Yemen is one of those modern day attempts at an Ealing comedy, something light-hearted but relatively inoffensive, gentle viewing for a Sunday afternoon with quirky characters and absurd situations. I’m finally giving the disc a spin to see if it can pull it off.

Dr. Alfred Jones is an expert working for the department of fisheries, spending his days sniping with his boss and his time off in a lukewarm marriage. But he’s then approached by Harriet Chetwode-Talbot, a PR representative for the Yemeni Sheikh Muhammed, with a view to introducing the sport of salmon fishing to Yemen. The Sheikh has a Scottish estate, and has become enamoured with the pastime, and he wishes to pursue his hobby in his native Yemen as well as in the UK. Dr Jones’ initial reaction is to ridicule the idea, but Harriet is determinedly upbeat about it. And then the UK government, facing an embarrassing PR disaster in Afghanistan, decide that they need a good news story from the Middle East, and salmon will be it.

This Lionsgate release offers the film with a 2.40:1 widescreen 1080p transfer, with the choice between DTS-HD MA 5.1 Surround English, 2.0 Stereo English audio descriptive, and with optional subtitles. A film from 2011 isn’t going to exhibit much in the way of age or damage, and the image is clear and sharp, colours are strong and consistent, and detail levels are excellent. Skin tones aren’t quite as well defined in darker or twilight scenes, and there is a hint of banding in a couple of scene fades, but other than that, the transfer is really quite good. The audio is fine, the dialogue remains clear throughout, and the film’s gentle music soundtrack hits the right notes for the kind of comedy that the film wants to be.

You get one disc in a BD Amaray. The disc boots to an animated menu.

There are just two brief featurettes on the disc, Making Salmon Fishing in the Yemen, which lasts 13:08, which offers the usual behind the scenes and interviews, and The Fisherman in the Middle East: Novelist Paul Torday, which lasts 3:15. Both are in SD.

Salmon Fishing in the Yemen doesn’t quite work as a comedy. The tone isn’t quite right, and it does make a noticeable misstep which leaves a bad taste in the mouth, but for much of the film, it is a quirky and gentle romantic comedy with some interesting ideas regarding the modern world that we live in, and spirituality. But it does have a very Ealing-esque approach to the story.

After all, it all begins with the idea of an apparent madman. Using a dam to irrigate the desert isn’t fantastical, but the idea of introducing salmon to the resulting waterway, hoping that they will swim upstream in a desert nation is the dream of a lunatic. It falls to a PR rep and a government expert to make it work. They are quite the opposites, so you know that romance will ensue. Dr Alfred Jones is meticulous and understated; compared to his domineering and headstrong wife, he seems more like a chastened schoolboy, the epitome of the emasculated male. Harriet Chetwode-Talbot on the other hand is vivacious and relentlessly positive. She’s in the middle of a whirlwind romance with a soldier when her new boyfriend is suddenly posted to duty. His absence gives her more time to work on the project with Dr Jones, and against all odds, they begin to get close.

That’s helped by the enthusiastic optimism of Sheikh Muhammed, the man with the dream, but as they look further into it, a dream which doesn’t appear as crazy as it did at first glance. He has a view on fishing as an expression of spirituality and faith that is infectious, and sees his plan as a way to give something back to the people. It’s enough to turn sceptics into true believers. Then Harriet’s boyfriend goes MIA in that PR disaster in Afghanistan, while at the same time Alfred’s marriage starts falling apart, and their relationship goes from professional to personal.

It’s all really quite a nice setup for a comedy, although the film chooses to walk a line between comedy and drama which means that it’s not as funny as it could be. It never made me laugh, but it did make me smile, and I did enjoy it up to a point. That’s despite it having quite an interesting contrast between the idea of faith, and the cynicism of governments and PR spin. But there is that misstep. A story set in the Middle East has its stereotypes, and given the year of production, those stereotypes are the low hanging fruit. I can forgive the ‘wise sage’ of the Sheikh, as his wisdom drives the plot, but I won’t forgive the use of the phrase “a thousand apologies” which is clichéd to the point of offensive. But the biggest problem is the terrorism. An Islamic country, and a man doing something that will offend the fundamentalists. Of course there is going to be terrorism, and naturally it’s so out of touch with the tone that the film is aiming for, that the movie left me with a sense of resentment, the thought that it had fallen at the final hurdle.

25 years ago, this film would have had John Cleese and Jamie Lee Curtis as the leads and would have been much funnier. There probably wouldn’t have been any terrorists either, or if there were, they would have been the comedy singing freedom fighters from Water. Salmon Fishing in the Yemen is tonally flawed and not really funny enough, but at least it’s watchable.